aside What President Trump Should Have Said About Violence Incited By Racists On August 12, 2017

The below editorial details what most Americans wished the republican President Donald Trump would have said yesterday (8/12/17) about the violence that erupted during a Charlottesville, VA scheduled rally by White nationalists/ White Supremacists/ neo-Nazis/ racists, set up to allow them to protest against the removal of a confederate era statue. The racist protesters had arrived at their rally dressed like Italian fascists ready for battle.

As per a  8/12/17 VOX article by Jeff Stein who paints what the scene looked like between the racist groups and the counter-protesters from the point of view of a witness, is as follows:

“Around 9:15pm, the church gathering started to break up. But then hundreds of white supremacists marched right outside the church. Everybody in the church was asked to remain inside. The Nazis came and made people essentially hostages in the church until they eventually marched away.”

“What they then did was go down UVA’s main lawn toward the Thomas Jefferson statute; student protesters headed them off, and they surrounded Thomas Jefferson’s statute to prevent the neo-Nazis from reaching it. The students wanted to say, “This is our space.” There are very moving pictures of these students being surrounded by neo-Nazis, and deeply unsettling video of them being physically attacked.”

The Nazis in #Charlottesville were literally beating people w/ torches, yet no police in riot gear. Hmm, wonder why. 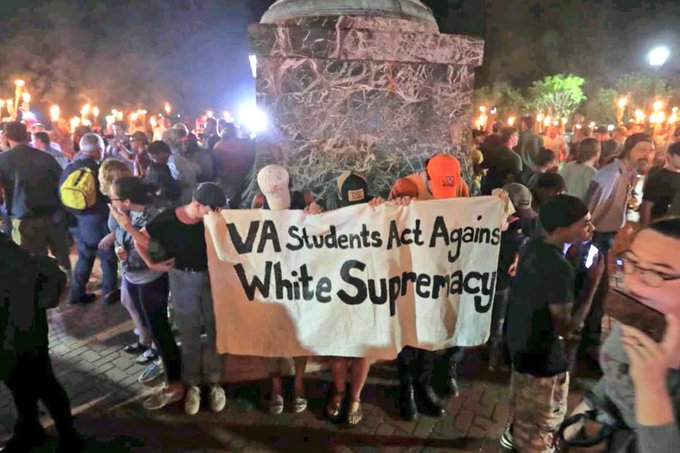 Teenagers standing up to a sea of white supremacists carrying torches.

Twitter Ads info and privacy
“The clergy marched down there (on Saturday, 8/12/17) and set up a human link to try to keep racists out. But that’s where the white supremacists planned on going. They had planned to go to Emancipation Park, and when they arrived they found the human link. The clergy sang “let it shine” over the neo-Nazi shouts of “blood and soil.”

“Eventually, hundreds and hundreds of white supremacists came walking or running or jumping down the streets, in successive waves. Sometimes they were dressed like Italian fascists; sometimes dressed like Donald Trump at a golf course, with white polo shirts and khaki pants and red “Make America Great Again” hats; some Nazis were saying, “Sieg Heil!;” and some were saying, “Heil Trump!” It was Nazis of all stripes — proud boys Nazis, and Nazis in camouflage fatigues, and then your normal KKK nazis. You’d see one group of Nazis, then another group of Nazis, and then another and another, and another.” 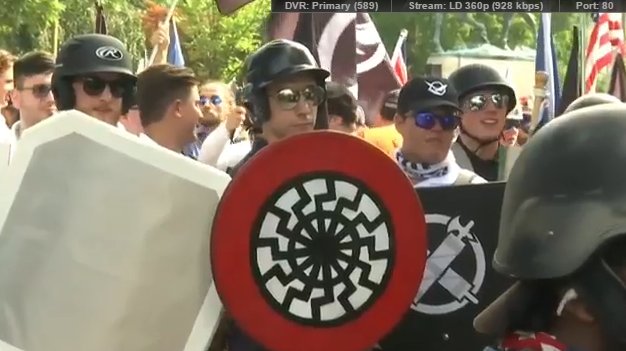 “There was the street and the sidewalk and the white supremacists basically had the street and the counter-protesters had the sidewalks. So the white supremacists would walk by, and as they did so they’d jeer or throw smoke bombs or take swings at people. Their numbers were unfathomable. You know how in Scooby Doo they’re chasing the perpetrator but they’re going in and out of different doors and reappearing? It had that surreal effect, because they’d face the street, go by and head right — and then there’d be different waves of them — and then an earlier wave would come back. It was completely bewildering.”There were couple times when there were real scares — when they’d throw a bunch of smoke-bombs and people would start choking, or when reports emerged that the nazis were throwing bottles full of urine at people. Eventually, we fell back to McGuffy Park and tried to figure out what to do.”

While President Trump did condemn this violence, he avoided placing the blame directly with the White nationalist racists but instead he called on all sides to end the violence. This is not what most Americans wanted to hear. But he was too intent on protecting his base of voters which includes his voting block of White supremacists.

So, after decades of White Americans being targeted for discriminated & anti-White hatred, we come together as a people, and you attack us? https://twitter.com/realDonaldTrump/status/896420822780444672 …

I would recommend you take a good look in the mirror & remember it was White Americans who put you in the presidency, not radical leftists. https://twitter.com/realDonaldTrump/status/896420822780444672 …

White Americans are so afraid to speak out that we’ve allowed our country to be invaded and our children to be propagandized by marxists. https://twitter.com/realDonaldTrump/status/896420822780444672 … 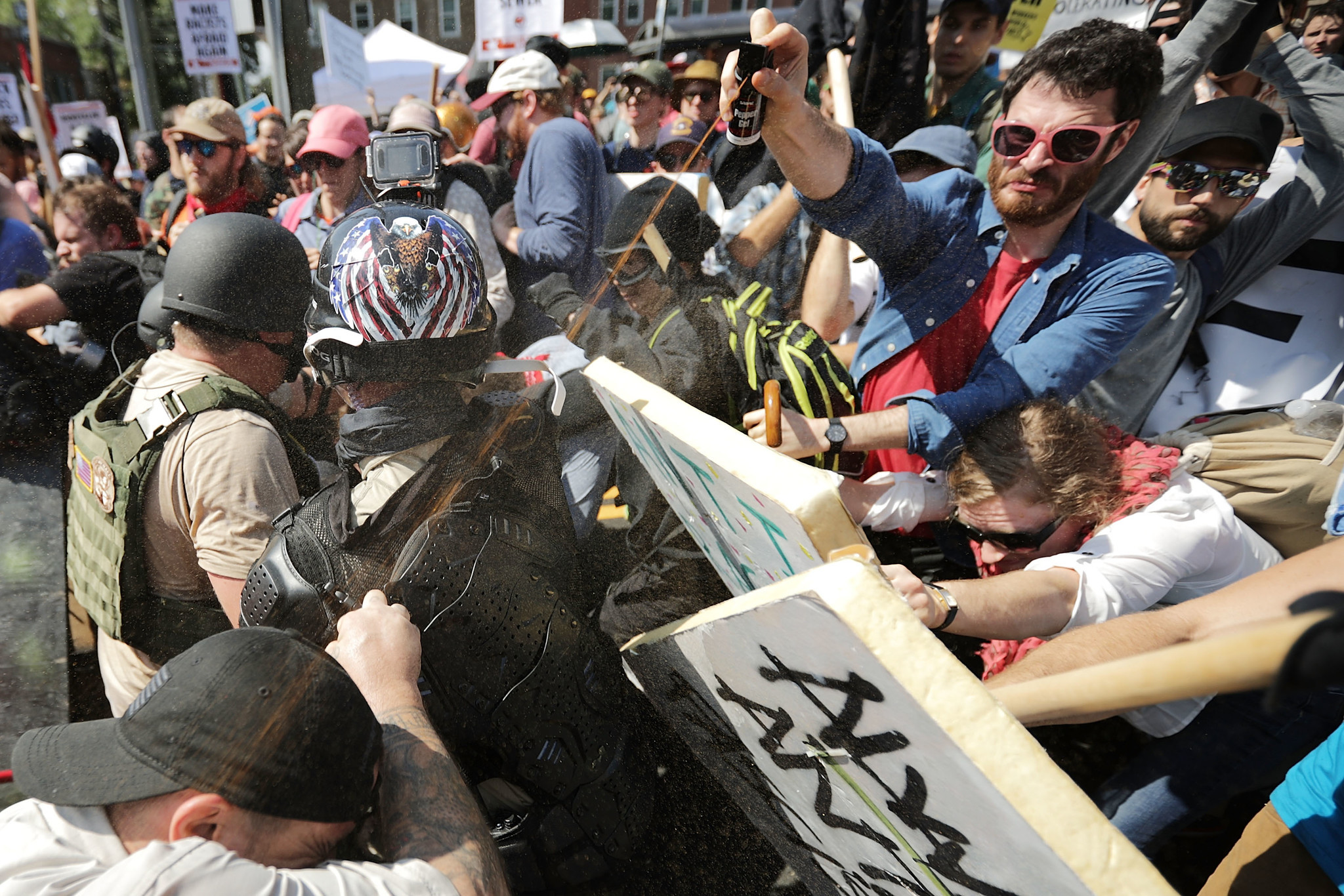 On August 12, 2017, the Editorial Board of the Washington Post penned the following report, “What a presidential president would have said about Charlottesville.”

HERE IS what President Trump said Saturday about the violence in Charlottesville sparked by a demonstration of white nationalists, neo-Nazis and Ku Klux Klan members:

We condemn in the strongest possible terms this egregious display of hatred, bigotry and violence on many sides. On many sides. 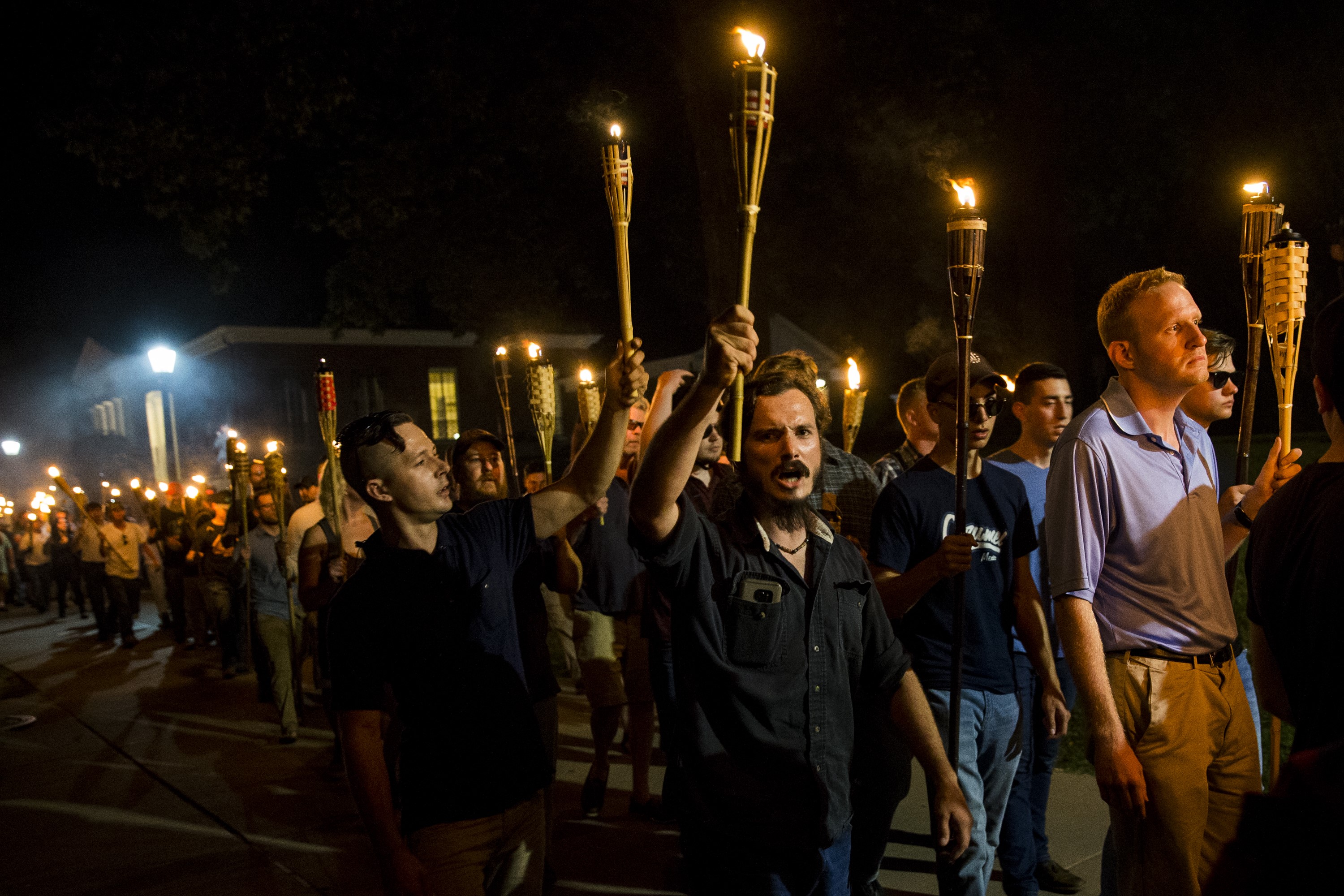 Here’s what a presidential president would have said:

“The violence Friday and Saturday in Charlottesville, Va., is a tragedy and an unacceptable, impermissible assault on American values. It is an assault, specifically, on the ideals we cherish most in a pluralistic democracy — tolerance, peaceable coexistence and diversity.”

“The events were triggered by individuals who embrace and extol hatred. Racists, neo-Nazis, Ku Klux Klan members and their sympathizers — these are the extremists who fomented the violence in Charlottesville, and whose views all Americans must condemn and reject.”

“To wink at racism or to condone it through silence, or false moral equivalence, or elision, as some do, is no better and no more acceptable than racism itself. Just as we can justly identify radical Islamic terrorism when we see it, and call it out, so can we all see the racists in Charlottesville, and understand that they are anathema in our society, which depends so centrally on mutual respect.”

“Under whatever labels and using whatever code words — ‘heritage,’ ‘tradition,’ ‘nationalism’ — the idea that whites or any other ethnic, national or racial group is superior to another is not acceptable. Americans should not excuse, and I as president will not countenance, fringe elements in our society who peddle such anti-American ideas.”

“Nor will we accept acts of domestic terrorism perpetrated by such elements. If, as appears to be the case, the vehicle that plowed into the counter-protesters on Saturday in Charlottesville did so intentionally, the driver should be prosecuted to the full extent of the law. The American system of justice must and will treat a terrorist who is Christian or Buddhist or Hindu or anything else just as it treats a terrorist who is Muslim — just as it treated those who perpetrated the Boston Marathon bombing in 2013.”

“We may all have pressing and legitimate questions about how the violence in Charlottesville unfolded — and whether it could have been prevented. There will be time in coming days to delve further into those matters, and demand answers. In the meantime, I stand ready to provide any and all resources from the federal government to ensure there will be no recurrence of such violence in Virginia or elsewhere. Let us keep the victims of this terrible tragedy in our thoughts and prayers, and keep faith that the values enshrined in our Constitution and laws will prevail against those who would desecrate our democracy.”