aside Who’s No Longer Tolerating The Big Bad Bully In The White House, Steve Bannon Is Leaving

According to latest breaking news, the republican President Donald Trump has finally shown his chief strategist Steve Bannon the exit door. This is a big win for other White House staffers like the National Security Adviser, General H.R. McMaster and the Defense Secretary General James Mattis who had been at odds with Mr. Bannon.

It has been rumored by Steve Bannon that he tendered his resignation about two weeks ago. Supposedly, the timing was set to coincide with his anniversary date of one year. This does not explain his purported off the record recent interviews where he dished on just about everyone in the White House and then described his future plans. It has long been suspected that he has been the number 1 leaker-in-chief.

Steve Bannon has been  well known to be the White Nationalist-in-chief who the republican President Donald Trump appeared to have been reticent to dismiss in the past.

The president has demonstrated discipline whenever he has talked about Russia and its President Vladimir Putin in the most positive terms possible considering the circumstances because he fears whatever hold they have on him. Despite the never ending rumors for months about the imminent departure of Mr. Bannon, it has taken a long time to fire him.

Could it be that the president was afraid to dismiss Mr. Bannon because of his connection to White Nationalist Breitbart News, as its former chairman, where if Mr. Bannon were to leave in a huff,  he could do serious damage to the president with the very same White nationalist base which has been a stalwart backer of the president? And Mr. Bannon probably has the goods to do real damage. We shall see what happens.

Steve Bannon is the one who brought other White nationalists into the White House like Sebastian Gorka and his wife Katharine. It is my opinion that all three are all past due for being shown the exit door.

In a recent interview, Mr. Bannon divulged his true colors as he dished on the players in the White House where he supposedly believed he was talking off the record. If what he shared didn’t get him fired, then nothing would.

There is a link to the entire interview below. One off the cuff comment that demonstrated to me, how pleased Mr. Bannon has been with himself is, ‘They’re wetting themselves,’ which is a reference to his opponents at State and Defense. He must have known when he did this that his days in the White House were numbered.

” If President Trump is considering whether to fire Stephen Bannon, his chief strategist, as has been rumored for weeks, Mr. Bannon just gave him several new reasons.”

“In an interview published Wednesday by a liberal journalist, Mr. Bannon contradicted the president’s position on North Korea, bad-mouthed his colleagues in the administration, vowed to oust a female diplomat at the State Department and mocked Trump officials who fear the consequences of radically changing trade policy, saying they are “wetting themselves.”

“People close to Mr. Bannon said he believed the comments were part of an off-the-record conversation with Robert Kuttner with The American Prospect that, according to the magazine, he initiated.”

“Still, they come as Mr. Bannon’s adversaries are aggressively seeking his ouster from the White House because of his links to Breitbart News, his feuding with other White House aides and a suspicion that he is the source of leaks about internal chaos inside the West Wing.”

“Mr. Bannon’s critics intensified their efforts after last weekend’s racial unrest in Charlottesville, Va. Outraged over Mr. Trump’s insistence that “both sides” were to blame for the violence that erupted during a white nationalist rally, leaving one woman dead, human rights activists demanded that the president fire so-called nationalists working in the West Wing. That group of hard-right populists in the White House is led by Mr. Bannon.”

“On Tuesday at Trump Tower in New York, Mr. Trump refused to guarantee Mr. Bannon’s job security but defended him as “not a racist” and “a friend.”

“In the American Prospect article, titled “Steve Bannon, Unrepentant,” the president’s strategist appears eager to lash out at his ideological rivals in the administration, bragging about his ability to defeat those who oppose a more aggressive posture toward China on trade policy.”

“That’s a fight I fight every day here,” Mr. Bannon said. “We’re still fighting. There’s Treasury and Gary Cohn and Goldman Sachs lobbying,” he said, referring to Mr. Cohn, the director of the National Economic Council at the White House.”

“He also specifically named Susan Thornton, the acting director of the East Asian and Pacific Affairs division at the State Department, as someone he will dispatch.” “I’m changing out people at East Asian Defense; I’m getting hawks in,” he said. “I’m getting Susan Thornton out at State.” 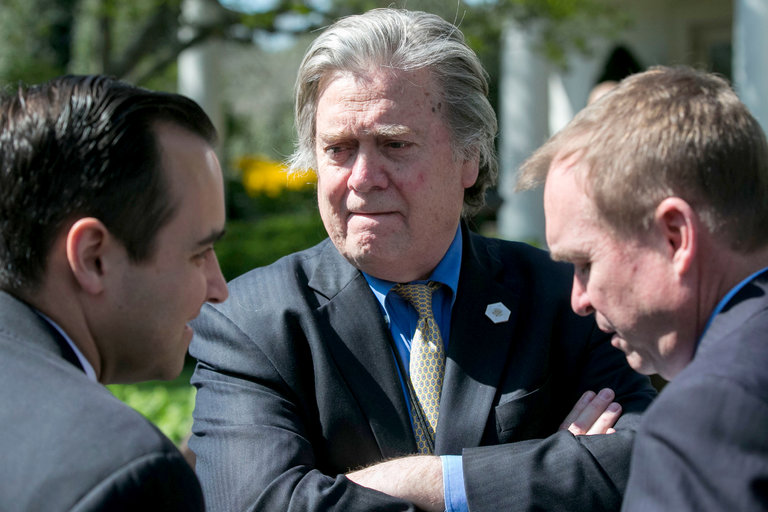 “Speaking on Tuesday (8/15/17), the same day that Mr. Trump was being assailed for his response to the Charlottesville protests, Mr. Bannon also dismissed the right-wing fringe as “a collection of clowns.” He said the more liberals talk about “identity politics,” the easier it will be for Mr. Trump to defeat Democrats by focusing on economic nationalism.”

“Mr. Bannon told friends that he did not believe that his conversation was an on-the-record interview. But Mr. Bannon is a savvy media operator who rarely speaks without a clear understanding of the rules. Mr. Kuttner said the issue of whether the call was on the record never came up.”