Other cities would do well to emulate the model of what Boston did to manage its “Free Speech” rally on August 19, 2017. Here is the rest of the story…

On August 19, 2017 WCVB5 reported that according to the Boston Police, the “Free Speech Rally” held on August 19, 2017 at Boston Commons was mostly peaceful. Of the estimated 40,000 attendees, there were only 33 arrests with no serious injuries resulting from acts of violence.

“The arrest charges included assault and battery on police officers. Three people were found wearing ballistic vests, and one of those was armed, Police Commissioner William Evans said.”

“99.9 percent of the people here were here for the right reason, and that is to fight bigotry and hate,” Evans said.”

“I want to thank everyone who came here to express themselves in such a positive, great manner today,” said Mayor Marty Walsh.” 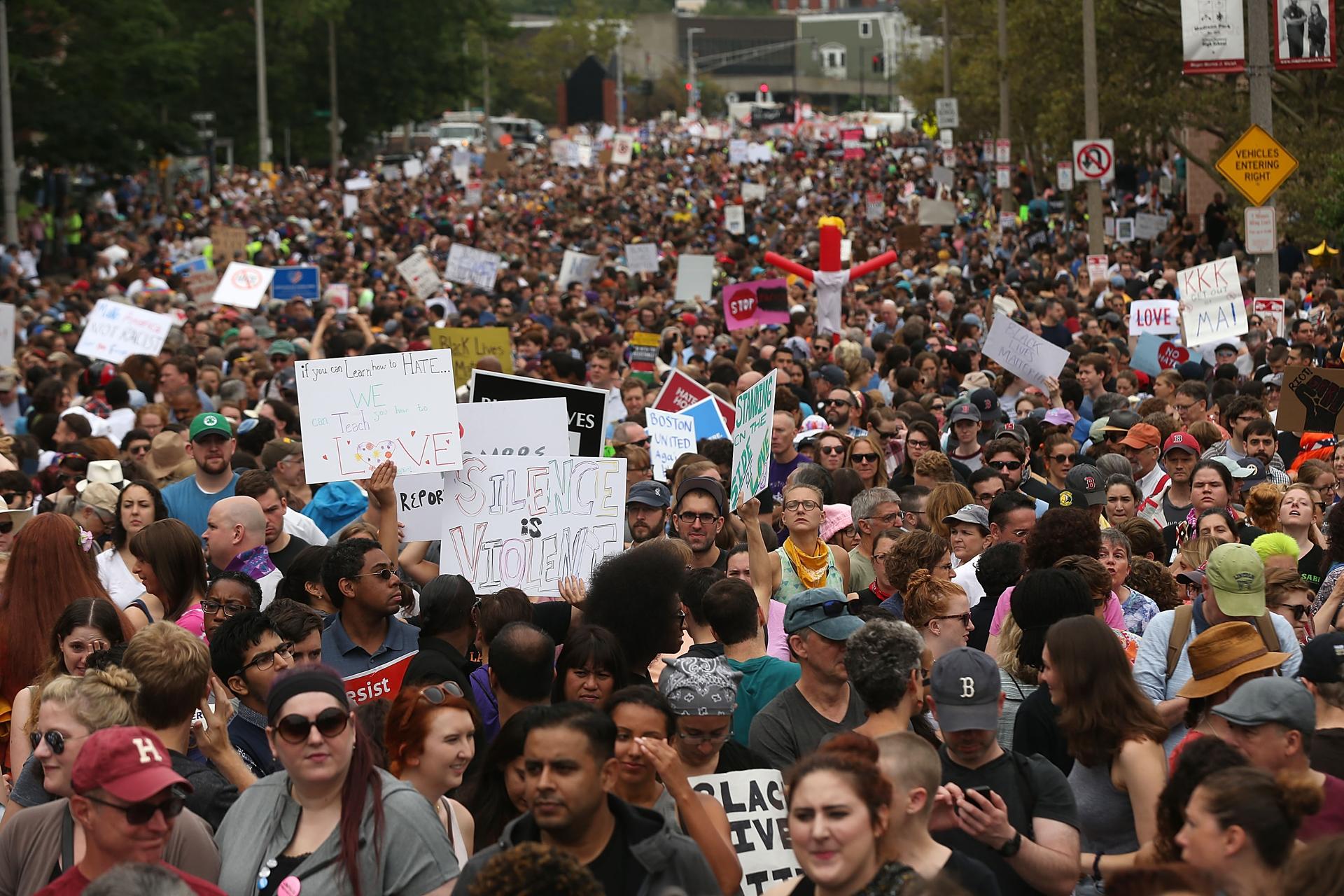 “The controversial “Free Speech Rally” on Boston Common was met with overwhelming counterprotests Saturday morning as thousands of people surrounded the cordoned-off bandstand and another 10,000 or more marched to the area from Roxbury.”

“The permit for Saturday’s event on Boston Common came with severe restrictions, including a ban on backpacks, sticks and anything that could be used as a weapon. Police also installed additional security cameras and barriers around the Common.”

“If anything gets out of hand, we will shut it down,” Mayor Marty Walsh said.

As many people began to disperse, a small number of rowdy protesters came face-to-face with armored officers near Tremont and Boylston Streets. The officers were trying to make room for police vehicles to pass through.”

” Officers in that area were seen taking a small number of people into custody, restraining their hands with handcuffs or plastic ties.Later Saturday afternoon, Boston’s police department tweeted that protesters were throwing bottles, urine and rocks at them and asked people publicly to refrain from doing so. About 10 minutes before that, President Donald Trump had complimented Boston police, tweeting: “Looks like many anti-police agitators in Boston. Police are looking tough and smart! Thank you.” 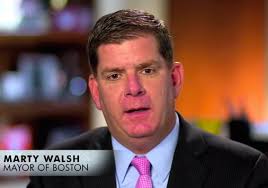 “TV cameras showed a group of boisterous counter-protesters on the Common chasing a man with a Trump campaign banner and cap, shouting and swearing at him. But other counter-protesters intervened and helped the man safely over a fence into the area where the conservative rally was to be staged.”

“Black-clad counter-protesters also grabbed an American flag out of an elderly woman’s hands, and she stumbled and fell to the ground.”

“On Boston Common itself, however, a picnic atmosphere took over with stragglers tossing beach balls, banging on bongo drums and playing reggae music.”

“Boston officials will permit a rally organized by a right-wing group Saturday (8/19/17) on a downtown public park, the Common, but with tight rules to try and prevent clashes between rally-goers and counter-protesters.”

“The rules include: no weapons, nothing sharp, no shields, no cans or glass containers, no bats, clubs, flagpoles or even sticks attached to signs. The city is cordoning off streets, extra mindful of security after the terror attack in Barcelona, according to police Commissioner William Evans.”

“The “Boston Free Speech Rally,” planned since at least mid-June, has become a major source of tension for the city following the deadly white-supremacist event in Charlottesville, Va., last weekend.”

“We’re going to respect their right of free speech,” Boston Mayor Martin Walsh, a Democrat, said at a press conference Friday (8/18/17). “In return they must respect our city.” The Boston Free Speech group has been working with police to plan the event, he said.”

“Organizers of the Boston event say they are politically diverse, but the logo on the rally’s Facebook page reads, “Right Wing Safety Squad,” and the page says the rally won’t be stopped by any “radical-left organization.” The group behind the rally, Boston Free Speech, rejects associations with groups that marched in Virginia, and it says on its Facebook page that the group “will not be offering our platform to racism or bigotry.”

“Thousands of counter-protesters, including local Black Lives Matter groups, are expected to march to the downtown Common on Saturday. Boston officials vowed that there would be cameras, barricades and police throughout the scene.” If anything gets out of hand, we will shut it down,” Mr. Walsh said.”

“He made clear he doesn’t want speakers with hateful messages in his city but said Boston officials would respect first Amendment rights so long as the scene remains safe.”

“Boston rally planners have said they are dedicated to peaceful events.”

“John Medlar, a 23-year-old rally organizer and a student at Fitchburg State University in central Massachusetts, said the event is being organized by a “bunch of guys on the internet” who shared a concern that free speech was being tamped down on college campuses.”

“He said that since Charlottesville, some white nationalists have attempted to co-opt the Boston event. “We’ve seen some activity on social media,” he said. “We don’t trust their motives—we see themselves as trying to insert themselves into this.” 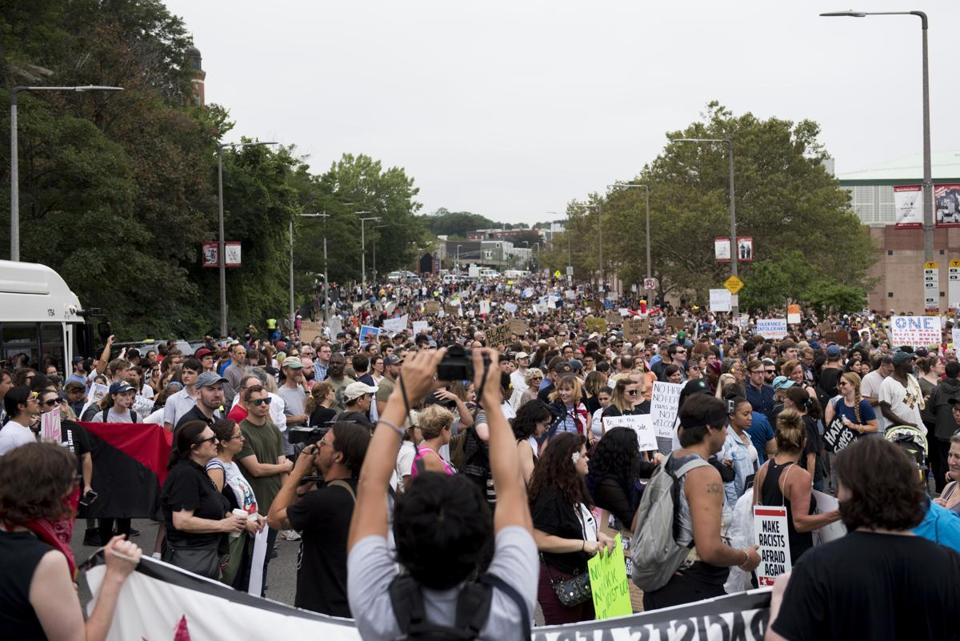 “In order to maintain control, he said the group has explicitly asked a local white nationalist group not to come, has shortened the event and has told people that symbols like the Confederate flag or Nazi regalia aren’t welcome. He said the event would begin with a moment of silence for Heather Heyer, the 32-year-old paralegal who was killed when a man rammed a car into her and others protesting a white-supremacist gathering in Charlottesville a week ago.”

“Some high-profile attendees have been nixed from the lineup, including Augustus Invictus, a former Libertarian Party candidate for the U.S. Senate from Florida who runs a website called “the Revolutionary Conservative.”

“Organizers still expect Kyle Chapman, who has called for violent confrontations with left-wing groups, to be on hand. Mr. Chapman was arrested after he was allegedly caught on video hitting an antifascist protester with a club at a March demonstration at the University of California, Berkeley, according to the Associated Press.”

“The event will shut down a large parking garage under the Common and local tourist attractions, such as the Public Garden swan boats, for security purposes. As a preparatory measure, local hospital Beth Israel Deaconess Medical Center has limited non-emergency surgical cases Saturday so that operating rooms are available for urgent cases, if needed, a spokeswoman said.”

“Undercover police will walk alongside marchers and will be among more than 500 police officers on hand to maintain order, according to the police commissioner. He said he expects a few “troublemakers” but said the police would have a zero-tolerance policy.”