It is at times like these that those in a community like Houston, TX whose residents have been faced with a catastrophic disaster and horrific losses due to “Hurricane Harvey,” when suffering peoples should be able to look to their neighbors, local, state and federal government, and especially, their local churches for some relief and comfort.

As per a  8/28/17 VOX report by Brian Resnick, “The situation is bad, and it could get worse. The weather service is calling the situation “catastrophic and life-threatening.”

This event is unprecedented & all impacts are unknown & beyond anything experienced. Follow orders from officials to ensure safety. #Harvey

“Harvey landed in coastal Texas as a Category 4 hurricane Friday night, and within a day, its winds degraded to tropical storm strength. But now this is a new emergency altogether. Harvey has stalled (as forecast) over the Texas coast, and the flooding may continue for days. On Sunday, as the situation grew dire, the Weather Service advised people to “get on the roof” if the top floor of their home became dangerous.”

Yet there is a famous megachurch, “Lakewood” whose doors were closed on Saturday,  Sunday and Monday to those who were in desperate need for solace and shelter. I have a thing about those who say they’ll pray for others, when the others are drowning and crying out for help.

The church finally opened their doors on Tuesday morning after an avalanche of negative news hit the blogo-sphere.

As per a 8/29/17 TMZ report update, JOEL OSTEEN CHURCH FINALLY OPENS TO EVACUEES In Wake of Harvey.”

“7:50 AM PT — Pastor Osteen’s church is now open for evacuees, and he says flooding inside the church is the reason for the delay.

A Lakewood Church rep tells us, “Lakewood’s doors are open now to anyone needing shelter. We are also coordinating with the city as a collection site for distributing supplies to area shelters. We are collecting diapers, baby formula, baby food and other supplies. Please bring these items to Lakewood Church, Circle Drive off Timmons St.”

The rep also sent us photos of “initial flooding” within the church, and says this is “why we couldn’t open initially.”

“Pastor Joel Osteen (has been) taking serious heat for not turning his Houston megachurch into a shelter for thousands of displaced residents who have no place to go.”

“The Houston Lakewood Church has a capacity of almost 17,000 but it has not been open to evacuees since the storm hit.”

As per a 8/29/17 Heavy.com report by Effie Orfanides, the news about the church having flooded have varied even by Lakewood Church’s surrogates…

“Dear Houstonians! Lakewood Church (its post) is inaccessible due to severe flooding! We want to help make sure you are safe. Please see the list below for safe shelters around our city, and please share this with those in need,” the update read in part.”

“You can see a couple of these photos and a video below.” 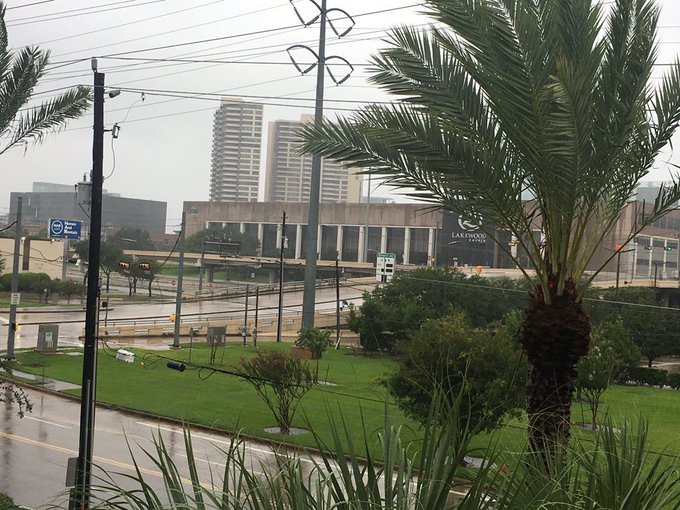 Front of @JoelOsteen‘s huge Lakewood Church in Houston at 11 am. Closed due to “flooding”. Person who took it asked to be anonymous. 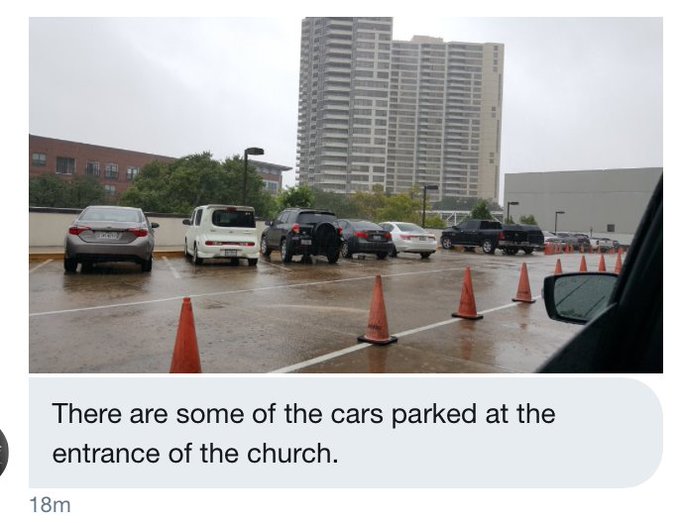 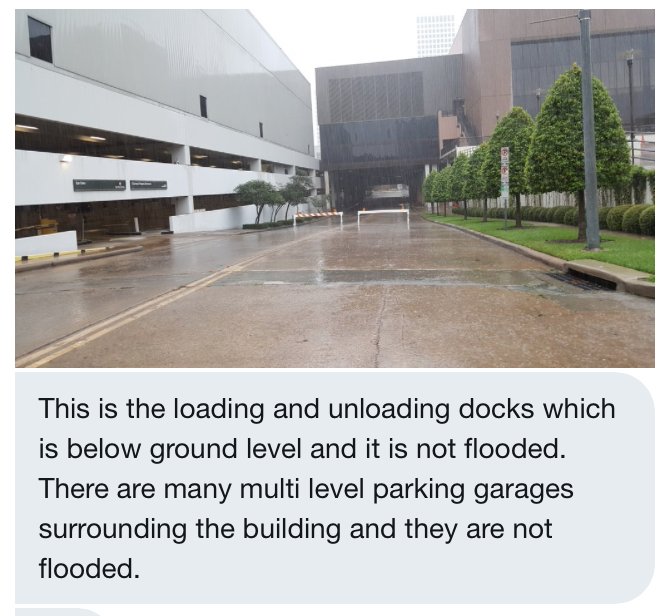 Houston’s @indivisible_usa is acquainted with @JoelOsteen‘s Lakewood Church. They took these pics about an hour ago w/ commentary. 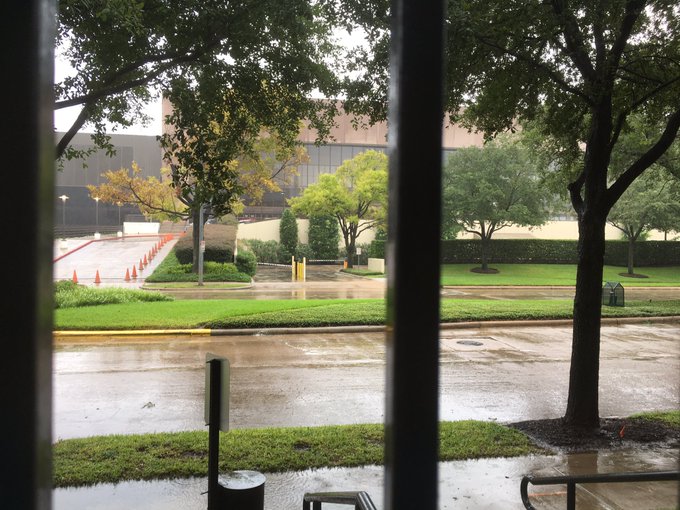 @cmclymer Looking pretty passable to me from this side, stay tuned for further exploration 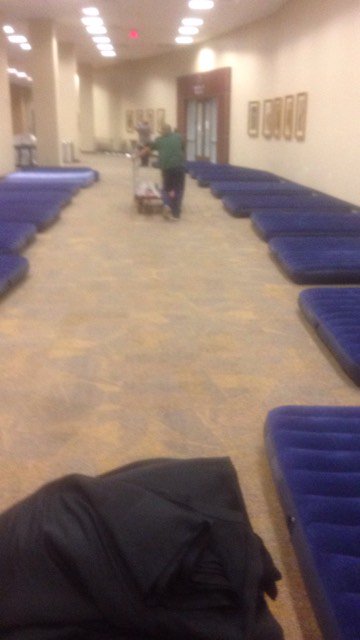 Lakewood Church apparently bought countless air mattresses and are prepping to open their doors. Took a while but good news.#JoelOsteen

As per a 8/29/17 Jill Dennison / Filosofa.com post’s crtitical piece, titled, A FRAUD AND A HYPOCRITE — JOEL OSTEEN, “It is said that some 30,000 people in and around Houston, Texas, are in need of temporary shelter in the wake of Hurricane Harvey.  Some of these people cannot return to their homes yet because of rising flood waters, while for others, there is no home to return to.  So many have lost so much, and according to the National Weather Service, it isn’t over yet.  Now, when tragedy such as this strikes, who do we think would logically be among the first to reach out, to offer whatever assistance and aid they could?  Why yes, the churches, of course.  Well, let me tell you a little story about one megachurch in Houston.”

“You have all heard, no doubt, of Mr. Joel Osteen, pastor of Houston’s Lakewood Church, a 16,800-seat indoor arena complete with plush carpeting and fountains.  Seems like a perfect place to shelter at least several hundred of those displaced by the storm, doesn’t it?  But while dozens of Houston-area churches, schools and community centers opened their doors to offer temporary shelter to survivors, while other local houses of worship organized volunteer teams to help with relief efforts, Lakewood Church’s doors remain closed.  Why?  The church’s Facebook page   claims that it would take too many volunteers to use the facility as a temporary shelter.  The official reason is that it was “inaccessible due to severe flooding.” The church itself appears undamaged by flood waters, mind you, but they fear people cannot get to the church.  Another answer, perhaps the real reason, can be found in the comments section on one Facebook post:”

“Pattie Hibbs Wilson: Don’t open the church! The ingrates will destroy it like they did the Superdome.”

Note to readers: Jill Dennison had the honor of being notified by Facebook that she has been blocked by Joel Osteen!  (Below 3 photos are from Jill Dennison’s blog.)

Here’s another example of one out of numerous critical write-ups about Lakewood Church having closed its doors for the entire weekend to those who suffering in the Houston community. On August 28, 2017, David K. Li of the New York Post penned the following report, Joel Osteen shuts megachurch amid flooding crisis

Televangelist Joel Osteen canceled services at his Houston megachurch Sunday (Lakewood Church), and has yet to reopen its doors — despite the fact that thousands of flooded-out residents are desperately seeking shelter.”

The perpetually smiling pastor told followers on Twitter on Monday (8/28/17) to lean on their faith.  He wrote, “Jesus promises us peace that passes understanding,”

“But Osteen’s (offer of ) comforting words didn’t sit well with critics, who want to know why the doors to his 16,800-seat arena at his Lakewood Church near downtown Houston are closed.”

“You have taken so much money away from your people to live like a king,” entertainment publicist Danny Deraney blasted. “It’s the least you could do.”

“Washington, DC-based writer Charles Clymer tweeted pictures of Lakewood Church, which did not appear to be damaged by floods.”

“It doesn’t make sense why you’re not opening up your mega church to house Houston citizens, help me understand that. Jesus,” according to Florida-based writer Emily Timbol.”

“While the church and its arena have not suffered any flood damage yet, ministry spokesman Donald Iloff said their property is inaccessible because of surrounding waters.” ( This is counter to latest version)

“And it makes no sense to open church doors when the city and county are already treating thousands of flood victims at the nearby George R. Brown Convention Center, according to Iloff.”

“It has everything inside there — medicine, doctors, places to sleep,” Iloff said of the convention center. “It’s amazing what they’re doing there to make people comfortable.”