aside Today’s Face Of Oklahoman White Nationalists In Comparison To Those In 1996? (Tim McVeigh)

The State Of Oklahoma has long been an attraction for hate groups for decades. The following report was published before Donald Trump was elected  as the 45th US president but it is eerily prescient of what is happening today.

This reference was forwarded to me from a fellow blogger, Crustyolemothman.com.

For many people, including the 1 in 4 Oklahomans each year who marry a member of a different race, “separatist” versus “supremacist” is a distinction without a difference. Intolerance, discrimination and segregation are simply different shades of the same things: extremism and hate.

Elohim City has come to symbolize both hate and extremism, attracting members of such groups in search of spiritual counsel. And the number of those groups is rising nationally. Mark Potok, senior fellow at Southern Poverty Law Center (SPLC), said his organization tracks hate and extremist groups based ideology rather than actions or criminality. He said the number of active hate groups in the U.S. went up from 784 in 2014 to 892 in 2015. The number of extremist, anti-government “patriot” groups also spiked in recent years, SPLC tracked 998 active anti-government groups last year.

“Those 17 hate groups in the state are dominated by multiple Ku Klux Klan (KKK) groups, three black separatist organizations, a neo-Confederate ministry and Windsor Hills Baptist Church in Oklahoma City. The church was placed on SPLC’s hate groups list after pastor Tom Vineyard made several anti-gay statements before the Oklahoma City Council in 2011. “

“Potok attributes the rise of KKK groups nationally to the 2015 fight over the Confederate flag in South Carolina — the number of chapters rose from 72 in 2014 to 190 in 2015, and there were rallies in support of the flag in 26 states last year.”

Ryan Lenz, editor of SPLC’s Hatewatch blog, said the increase of KKK activity in Oklahoma can be traced to the state’s geography and recent immigration trends.

“Oklahoma is one state removed from the border,” Lenz said. “So something like the Klan, while historically an anti-black organization, in recent years, as the realities of current affairs that animate hate groups have diversified or changed, immigration is a large factor.” 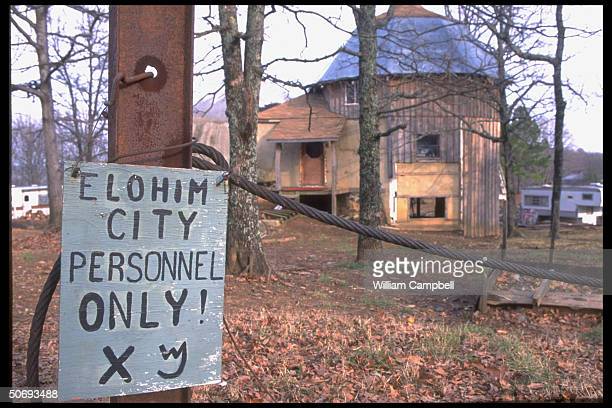 Not Much Has Changed

Editor’s Note: 21 years after the Oklahoma City bombing, Elohim City’s founding family is done talking about its alleged association with convicted anti-government and white supremacist domestic terrorist Timothy McVeigh. But the Millar family’s views on race and the genetic superiority of whites definitely makes that difficult.

In early 1996, almost one year after the bombing of the Alfred P. Murrah Federal Building in downtown Oklahoma City, Oklahoma Gazette photographer Mark Hancock and I drove east on Interstate 40 in my wife’s 1987 Grand Am. As we passed the Shawnee Mall on our way to a remote white separatist community on the eastern border of Oklahoma, a black-and-yellow religious billboard loomed near the Shawnee City limits:

Are You Going to Heaven, or to Hell?

It’s the kind of question most visitors to the tiny village of about 100 people could answer easily for themselves, depending on their response on their approach to Elohim City, or “God’s City.” It was the smiling residents with their Jim Crow attitudes about race that clinched most visitors’ assessment of the heaven/hell binary.

We went there to report on a place of particular intrigue for reporters covering the labyrinthine backstories of the bombing, a place to which Timothy McVeigh allegedly placed a phone call two weeks before the attack — most likely to Andreas Karl Strassmeir, a German national McVeigh met at a Tulsa gun show in 1993. The resulting story, “Welcome to Elohim City,” prompted many letters to the editor and phone calls, and not all of it praise. Due to my journalistic decision to let the members of the community tell their own story of Christian Identity, a white separatist doctrine and apocalyptic ideology, with little editorializing on my end, one of my former history professors at the University of Oklahoma wrote a scathing letter to the Gazette, calling for me to be fired, apparently for not flicking a lighted match out the window on my way out.

For many others, it became one of the defining stories of the Gazette’s post-bombing coverage, a view of the lifestyle and philosophy of antigovernment, back-to-nature white separatists in the logging-rich forests of eastern Oklahoma. It was a story that needed telling.

Two decades later, discussions about race are far less civil than they were in the mid-1990s, and presidential campaigns have done much to stoke that incivility. With white nationalist groups robocalling voters during primary season and the sound of quasi-racist “dog whistles” on the campaign trail becoming its own toxic noise pollution, it was time to revisit this place — this time, through the providence of cellular technology.

“Twenty-one years after the Oklahoma City bombing, David Millar is done talking about Timothy McVeigh. According to Millar, McVeigh — the convicted murderer of 168 people on April 19, 1995 — never visited Elohim City, and the attendant rumors and theories about his community’s involvement in the bombing were dispensed with long ago.”

“Millar, 48, is the younger son of Robert Millar, a Canadian ex-Mennonite who founded the 400-acre community in 1973. Since 2001, David Millar’s older brother, John, has served as Elohim City’s spiritual leader. Other than his father’s death and the installation of cellphone service; high-speed Internet; and a new, 7,000-square-foot church, David Millar said that not much has changed in Elohim City since the days when federal investigators and journalists made regular visits to the village, looking for clues or connections to the bombing. “

“I think we’ve maintained a similar population,” David Millar said. “We usually run about 100 or more, half of them children. People come, and some people get married and move, get jobs and others show up, so we probably don’t have many more people than we did back then.”

“Other things remain the same, such as the presence of James Ellison, the former leader of the Arkansas white supremacist paramilitary group known as The Covenant, The Sword and the Arm of the Lord (CSA). Ellison, now in his mid-70s, has lived there two decades. Richard Wayne Snell, an Arkansas white supremacist who was executed on the day of the Murrah Building domestic terrorist bombing for the 1983-84 murders of a pawnbroker he thought was Jewish and an African-American state trooper, is still buried in Elohim City.”

“Millar said that Elohim City is labeled frequently as a militant group or a hate group and it is often lumped in with the kind of people who have visited there, including members of the Aryan Republican Army, a group of white supremacists who robbed 22 Midwestern banks in the mid-1990s. Millar said that journalists often misidentify his community as white supremacists and describe Elohim City as a “compound” (a term at which he bristles), and John and David Millar both fervently deny in the press that Elohim City is a hate group. Such terminology, David Millar said, amounts to what he calls “paper terrorism.”

“In concrete terms, many Elohim City residents are part of Christian Identity, a belief that the Anglo-Saxon, Germanic and Nordic people are the true descendants of the biblical Israelites and other races are barred from achieving salvation and will not take part in the Kingdom of Heaven. According to Southern Poverty Law Center, a Montgomery, Alabama-based legal research organization devoted to the study and reporting of intolerance, Christian Identity rose to prominence in the 1980s as an influential philosophy among militant right-wing groups such as the CSA.”

“We get labeled white supremacist. We don’t think there’s anything supreme about us, but our God is supreme. And he chose our people to do particular work,” Millar said.

“What we do believe in is racial purity. Kind begets kind, and it’s generally a better environment if white people marry white people and black people marry black people and Chinese marry Chinese,” he said. “We’re different not by a freak accident of evolution, but this is the creation that the Lord made. We all have unique abilities and a unique plan, so to confuse the issue and make one brown race — that’s all; just a little bit of everything, which I guess is the humanist view of this that would be politically correct — to do that would just add confusion.”

“We don’t have a problem with the other races, but the wonderful distinctions in our culture, our genetics are something that should be amplified.”

Robert Millar died on May 28, 2001 and was buried near the final resting place of Snell, his friend and spiritual follower.

“David Millar said he thinks Obama’s election was an experiment by a young generation with noble intentions, but according to his interpretation of scripture, the election of an African-American man as president of the United States flouted the word of God.”

“We’re still a predominantly white country; the majority in America would still be the Anglo-Saxon Germanic people. If that’s the case, then they ought to have somebody in the chief office ruling over them. I think that would bring more peace and tranquility in the nation,” Millar said.

“The idea of having Barack Obama as president brought a downhill spiral to our nation’s economic growth and recovery after all the war spending that Bush did, the racial tensions have grown rapidly since he’s been in there, and it hasn’t brought peace. The scripture talks about that,” he said. “It says, ‘Don’t have a foreigner that is somebody from another race lead over you. “

At this point, a shift toward “birtherism” should not be surprising coming from one of Elohim City’s leaders, especially since Donald Trump, a front-runner for the Republican presidential nomination, popularized the concept. But it underlines how the ideas that originate from fringe groups can be so effectively mainstreamed in today’s political climate.”

“If you put an Arab … if you got one of them that believes in Islam in as president of the United States or in a place of power and they don’t really have any of the Western civilization thoughts on equity that most of America does, it’s going to be a problem.”

“It’s not that one’s right and one’s wrong; it’s that they’re different, and then the child grows up and doesn’t really know where to fit in,” he said. “One of them likes the cornbread and one likes the Irish potatoes.”

The End Is Near

“I think it’s talking about the spiritual warfare that’s going on for the hearts and minds of Americans,” Millar said. “Whether this election will help with it or not, I don’t know, but I think there is a core in America that are going back to the Lord. They’re wanting to get back to the fundamentals of our founding fathers.”

Of course, that all hinges on a President Trump who is just European enough, it turns out, to make the cut for Elohim City.

A political movement that believes whites should live separately from nonwhites and/or exclude nonwhite races.