aside Does Climate Change Have Anything To Do With Hurricane Harvey? YES!

Dear Republicans, Yes, there is a link between climate change and the existence of  more extreme weather conditions and this includes Hurricane Harvey. If you don’t want to listen to the climate change scientists, reach out to the property and casualty insurance companies’ long term forecasters. They can prove to you in concrete terms that the US storms have been increasing in intensity along with the corresponding increase in payouts for property damage claims. This is a reality that has to be faced so that future horror stories can be mitigated.

On August 20, 2017, Oliver Milman of the Guardian penned the following report, Conservative groups shrug off link between tropical storm Harvey and climate change.”

Is there a link between the storm and climate change?

Almost certainly, according to a statement issued by the World Meteorological Organization on Tuesday. “Climate change means that when we do have an event like Harvey, the rainfall amounts are likely to be higher than they would have been otherwise,” the UN organisation’s spokeswoman Clare Nullis told a conference. Nobody is arguing that climate change caused the storm, but it is likely to have made it much worse.

How did it make it worse?

Warmer seas evaporate more quickly. Warmer air holds more water vapour. So, as temperatures rise around the world, the skies store more moisture and dump it more intensely. The US National Weather Service has had to introduce a new colour on its graphs to deal with the volume of precipitation. Harvey surpassed the previous US record for rainfall from a tropical system, as 49.2 inches was recorded at Mary’s Creek at Winding Road in Southeast Houston, at 9.20am on Tuesday.

Is this speculation or science?

There is a proven link – known as the Clausius-Clapeyron equation – that shows that for every half a degree celsius in warming, there is about a 3% increase in atmospheric moisture content. This was a factor in Texas. The surface temperature in the Gulf of Mexico is currently more than half a degree celsius higher than the recent late summer average, which is in turn more than half a degree higher than 30 years ago, according to Michael Mannof Penn State University. As a result there was more potential for a deluge.

Are there other links between Harvey and climate change?

Yes, the storm surge was greater because sea levels have risen 20cm as a result of more than 100 years of human-related global warming. This has melted glaciers and thermally expanded the volume of seawater.

Conservative groups with close links to the Trump administration have sought to ridicule the link between climate change and events such as tropical storm Harvey, amid warnings from scientists that storms are being exacerbated by warming temperatures.

Harvey, which smashed into the Texas coast on Friday, rapidly developed into a Category 4 hurricane and has drenched parts of Houston with around 50in of rain in less than a week, more than the city typically receives in a year. So much rain fell that the National Weather Service had to add new colours to its maps

The flooding has resulted in at least 15 deaths, with more than 30,000 people forced from their homes. Fema has warned that hundreds of thousands of people will require federal help for several years, with Greg Abbott, governor of Texas, calling Harvey “one of the largest disasters America has ever faced”. Insurers have warned the cost of the damage could amount to $100bn.

Some scientists have pointed to the tropical storm as further evidence of the dangers of climate change, with Penn State University professor of meteorology Michael Mann stating that warming temperatures “worsened the impact” of the storm, heightening the risk to life and property.

“Conservative groups, however, have mobilized to downplay or mock any association between the storm and climate change. Myron Ebell, who headed the Environmental Protection Agency’s transition team when Donald Trump became president, said the last decade has been a “period of low hurricane activity” and pointed out that previous hurricanes occurred when emissions were lower.”

“Instead of wasting colossal sums of money on reducing greenhouse gas emissions, much smaller amounts should be spent on improving the infrastructure that protects the Gulf and Atlantic costs,” said Ebell, who is director of environmental policy at the Competitive Enterprise Institute, a libertarian think-tank that has received donations from fossil fuel companies such as Exxon Mobil.

“Thomas Pyle, who led Trump’s transition team for the department of energy, said: “It is unfortunate, but not surprising, that the left is exploiting Hurricane Harvey to try and advance their political agenda, but it won’t work.”

“When everything is a problem related to climate change, the solutions no longer become attainable. That is their fundamental problem.”

“Pyle is president of the Institute of Energy Research, which was founded in Houston but is now based in Washington DC. The nonprofit organization has consistently questioned the science of climate change and has close ties to the Koch family.”

“The Heartland Institute, a prominent conservative group that produced a blueprint of cuts to the EPA that has been mirrored by the Trump administration’s budget, quoted a procession of figures from the worlds of economics, mathematics and engineering to ridicule the climate change dimension of Harvey.”

“In the bizarro world of the climate change cultists … Harvey will be creatively spun to ‘prove’ there are dire effects linked to man-created climate change, a theory that is not proven by the available science,” said Bette Grande, a Heartland research fellow and a Republican who served in the North Dakota state legislature until 2014.

“Facts do not get in the way of climate change alarmism, and we will continue to fight for the truth in the months and years to come.”

“Harvey was the most powerful storm to hit Texas in 50 years, but  according to the National Oceanic and Atmospheric Administration, it is “premature” to conclude that there has already been an increase in Atlantic-born hurricanes due to temperatures that have risen globally, on average, by around 1C since the industrial revolution.Scientists have also been reluctant to assign individual storms to climate change but recent research has sought to isolate global changes from natural variability in disasters such as Hurricane Katrina, which devastated New Orleans in 2005.

“However, researchers are also increasingly certain that the warming of the atmosphere and oceans is likely to fuel longer or more destructive hurricanes. A draft of the upcoming national climate assessment states there is “high confidence” that there will be an increase in the intensity and precipitation rates of hurricanes and typhoons in the Atlantic and Pacific as temperatures rise further.”

“Harvey may well fit that theory, according to climate scientist Kevin Trenberth, as the hurricane managed to turn from a tropical depression to a category four event in little more than two days, fed by a patch of the Gulf of Mexico that was up to 4C warmer than the long term average.”

“When storms start to get going, they churn up water from deeper in the ocean and this colder water can slow them down,” said Trenberth, a senior scientist at the National Center for Atmospheric Research. “But if the upwelling water is warmer, it gives them a longer lifetime and larger intensity. There is now more ocean heat deep below the surface. “The Atlantic was primed for (THIS) event.”

“While the number of hurricanes may fall, scientists warn the remaining events will likely be stronger. A warmer atmosphere holds more evaporated water, which can fuel precipitation – Trenberth said as much as 30% of Harvey’s rainfall could be attributed to global warming. For lower-lying areas, the storm surge created by hurricanes is worsened by a sea level that is rising, on average, by around 3.5mm a year across the globe.’

“The oil and gas industry has sought to see off the threat in the Gulf of Mexico with taller platforms – post-Katrina, offshore rigs are around 90ft above sea levelcompared to 70ft in the 1990s – but the Houston, the epicenter of the industry, is considered vulnerable due to its relaxed approach to planning that has seen housing built in flood-prone areas.”

“Curbelo, who has attempted to rally Republicans to address climate change, wouldn’t comment on the climate change link to Harvey. Ted Cruz and John Cornyn, Texas’s Republican senators, didn’t respond to questions on the climate link, nor did Abbott, the state’s governor, or Dan Patrick, Texas’s lieutenant governor. All four of the Texas politicians have expressed doubts over the broad scientific understanding that the world is warming and that human activity is the primary cause.” 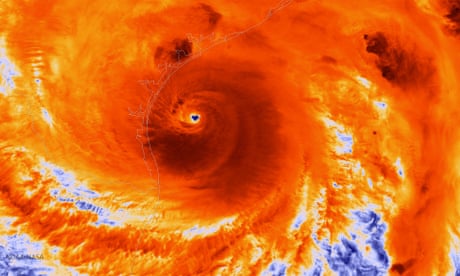 “It’s essential to talk about climate change in relation to events like Hurricane Harvey and it’s sad a lot of reports don’t mention it in any way,” said Trenberth.

“You don’t want to overstate it but climate change is a contributor and is making storms more intense. A relatively small increase in intensity can do a tremendous amount of damage. It’s enough for thresholds to be crossed and for things to start breaking.”