It looks like the US Congressional lawmakers will be passing legislation to ban bump-stocks devices that turns a semi-automatic rifle into a machine gun. The NRA is backing this move.

The question is, can other regulations be included in this bill like,  strengthening the national background-check system; adding a plan to no longer allow gun dealers to sell weapons after three days if the FBI has not yet completed a background check on the buyer; and introducing legislation that would allow qualified gun owners to use “smart gun” technology that restricts who can use a weapon. “The National Rifle Association has joined an effort to restrict a device that was used to accelerate gunfire in the Las Vegas massacre, after the White House and top Republicans signaled a willingness to debate the issue in response to the tragedy.”

“In Las Vegas, reports indicate that certain devices were used to modify the firearms involved. . . . The NRA believes that devices designed to allow semiautomatic rifles to function like fully-automatic rifles should be subject to additional regulations,” the NRA’s executive vice president and chief executive, Wayne LaPierre, said in a joint statement with Chris W. Cox, executive director of the NRA Institute for Legislative Action.”

“The NRA’s support for restricting bump fire stocks, or bump stocks, gave political cover to the widening group of Republican lawmakers who have said they want to consider the option after Sunday’s shooting, which left at least 58 dead and hundreds injured.” “As the country’s largest gun-rights group, the NRA exerts considerable influence on the GOP’s approach to gun policy, and many Republicans fear that opposing it could lead the group to retaliate in primary elections.”

“The growing willingness to address the issue within the GOP stands in contrast to the party’s usual opposition to measures to restrict firearm use and access and could help leaders combat the perception they haven’t done anything to address mass shootings. Republican support for a bump-stock ban was building ahead of the NRA’s announcement, raising questions about whether the NRA had already communicated its support for the policy to the GOP behind closed doors.”

“House Speaker Paul D. Ryan (R-Wis.), House Majority Leader Kevin McCarthy (R-Calif.) and House Judiciary Committee Chairman Bob Goodlatte (R-Va.) all said Thursday  (10/5/17) that lawmakers will consider further restrictions on the devices. More than a dozen Senate Republicans said they were open to the possibility. Even some of Congress’s most conservative lawmakers — as well as some of its most avid gun-rights supporters — said the restrictions were worth consideration.”

“I didn’t know what a bump stock was until this week,” Ryan said at a news conference in Chestertown, Md. “A lot of us are coming up to speed. . . . Having said that, fully automatic weapons have been outlawed for many, many years. This seems to be a way of going around that, so obviously we need to look how we can tighten up the compliance with this law so that fully automatic weapons are banned.”

“Senate Majority Leader Mitch McConnell (R-Ky.) stuck out Thursday as one of the only members of Republican congressional leadership who had not indicated he was on-board. He told reporters Tuesday that it is “completely inappropriate to politicize an event like this” and declined to answer further questions on the subject.”

“Support for a possible ban is starting to coalesce around different pieces of legislation.”

“One measure, unveiled Wednesday (10/4/17) by Sen. Dianne Feinstein (D-Calif.), would ban the sale, transfer and manufacture of bump stocks, trigger cranks and other accessories that can accelerate a semiautomatic rifle’s rate of fire.” 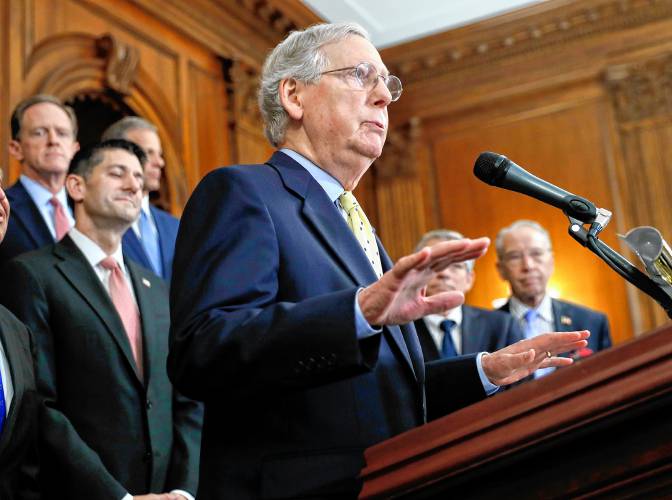 “Feinstein’s bill had support from 38 Democrats as of Thursday morning, including Sens. Bill Nelson (Fla.) and Claire McCaskill (Mo.), who both face uphill fights for reelection next year.”

“In the House, a bill from Rep. Carlos Curbelo (R-Fla.) would focus on bump stocks and leave out restrictions on other gun accessories.”

“Curbelo said he had been “flooded” with requests from Republicans who want to sign on to the measure, which he planned to introduce by the end of the day Thursday.”

“I think we are on the urge of breakthrough where when it comes to sensible gun policy,” said Curbelo, a moderate Republican who represents a Miami-area district. “It’s obvious that this is a flagrant circumvention of the law, and no member of Congress should support any circumvention of existing law.”

“Rep. David N. Cicilline (D-R.I.) introduced legislation similar to Feinstein’s in the House. It had 140 sponsors as of Wednesday night.” 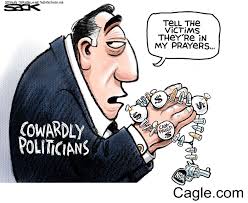 “Sen. Heidi Heitkamp (D-N.D.) said in a statement that she did not know much about bump stocks, “and I first want to learn more about them.”

“Sen. Joe Manchin III (D-W.Va.) said that Feinstein’s idea “sounds sensible and reasonable to me” but that he would consult hunters in his state before taking a position.”

“Sen. Joe Donnelly (D-Ind.), after declining to comment on Wednesday and most of Thursday, issued a statement after the NRA’s announcement, saying: “This is a critical and timely issue. I am very concerned about bump stocks, and I am closely reviewing recently proposed legislation.” 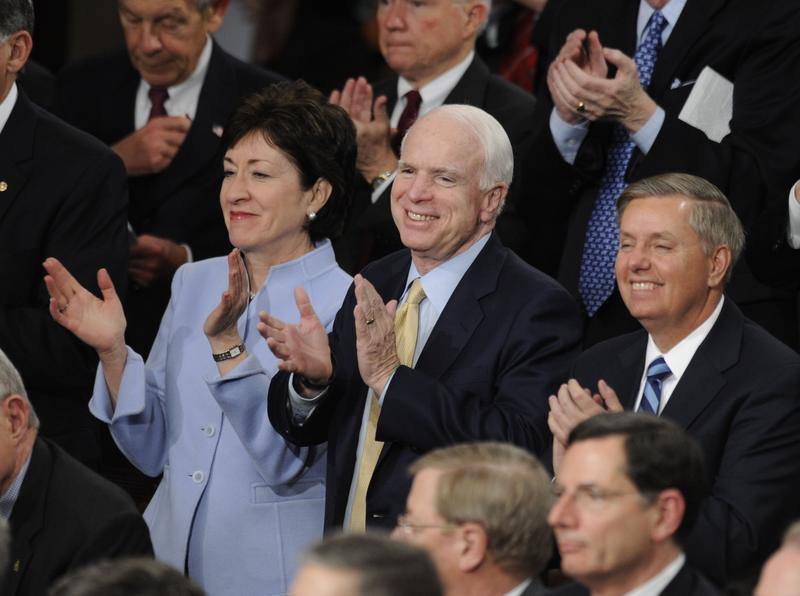 “Sen. John McCain (R-Ariz.) said that the sheer carnage of Sunday’s mass shooting is fueling lawmakers’ interest in the issue.”

“McCain supported expanding the national gun background-check program in 2013. He said he is open to Feinstein’s proposal but wants to see the details first.”

“On Thursday a pair of lawmakers began an effort that could preempt legislation on bump stocks. Two House Republicans with military backgrounds, Reps. Mike Gallagher (Wis.) and Adam Kinzinger (Ill.), were gathering signatures for a bipartisan letter asking the Bureau of Alcohol, Tobacco, Firearms and Explosives to revisit its 2010 administrative determination that bump stocks are legal.”

“A group of Democrats made the same request in their own letter to ATF.”

“Some lawmakers said they had never heard of bump stocks before Sunday’s shooting and have since turned to YouTube to watch videos showing how the devices work.”

“That’s what I did yesterday,” said Sen. Susan Collins (R-Maine), adding that many of her colleagues have done the same.”

“Even prominent supporters of gun rights said they had not heard of bump stocks before this week.”

“Rep. Ted Yoho (R-Fla.), who like Duncan belongs to the House Second Amendment Caucus, also said he was researching the accessory.”

“But if it allows a semiautomatic to do what that guy did?” he said. “I think we need to have serious considerations if we’re going to allow that.”

“Democrats in the Senate are planning to introduce additional gun-control legislation, though it seems unlikely to move in the Republican-controlled chamber.”

“Sen. Richard Blumenthal (D-Conn.), a fierce gun-control advocate since the 2012 shooting at Sandy Hook Elementary School in Newtown, Conn., said he would reintroduce a plan to no longer allow gun dealers to sell weapons after three days if the FBI has not yet completed a background check on the buyer.”

“And Sen. Edward J. Markey (D-Mass.) plans to reintroduce legislation that would allow qualified gun owners to use “smart gun” technology that restricts who can use a weapon.”