We all knew that the republican President Donald Trump’s former campaign manager from about March -August 2016 would be likely indicted by the FBI because of all of his ties to Russian officials. His right hand man Rick Gates remained on the president’s campaign long after Mr. Manafort resigned.

Around 2006, a young Rick Gates became an assistant to Paul Manafort. When Paul Manafort left the president’s campaign in August 2016, as his Russian/ Ukraine ties were being questioned, it was his deputy Rick Gates who took over the management of the Republican convention events.”

After the presidential inauguration, Rick Gates was found working directly for Tom Barrack, according to several news sources.

Tom Barrack, a former millionaire Trump fundraiser and long time friend had led the presidential inaugural committee, has maintained frequent contact with the president. As an ally, he was also instrumental in bringing Paul Manafort into Trump’s political orbit during the campaign.

THIS BLOG WILL BE UPDATED WITH THE INDICTMENT DETAILS LATER TODAY, OCTOBER 30, 2017…

On October 30, 2017, Matt Apuzzo of the New York Times penned the following report, “Paul Manafort, Who Once Ran Trump Campaign, Told to Surrender.

[Read the Manafort and Gates indictment]

“Paul Manafort and his former business associate Rick Gates were told to surrender to federal authorities Monday morning, the first charges in a special counsel investigation, according to a person involved in the case.” 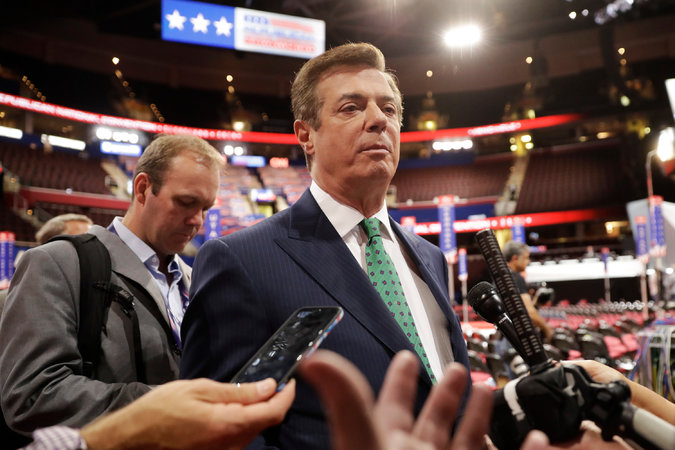 “The charges against Mr. Manafort, President Trump’s former campaign chairman, and Mr. Gates, a business associate of Mr. Manafort, were not immediately clear but represent a significant escalation in a special counsel investigation that has cast a shadow over the president’s first year in office.”

“Mr. Gates is a longtime protégé and junior partner of Mr. Manafort. His name appears on documents linked to companies that Mr. Manafort’s firm set up in Cyprus to receive payments from politicians and businesspeople in Eastern Europe, records reviewed by The New York Times show.”

“Mr. Manafort had been under investigation for violations of federal tax law, money laundering and whether he appropriately disclosed his foreign lobbying.”

So far, there are 12 indictment counts which pertain to financial dealings having nothing to do with Russia’s meddling into the 2016 US presidential campaign. This is only a start. Other charges can and will be added later.

Some news reports state that these charges were filed, possibly because of “Statute of Limitations” requirements or a time limit set from the time of a crime having been committed and the filing of federal criminal investigation charges.

Papadopoulos pleaded guilty earlier this month to making a false statement to FBI investigators who asked about his contacts with a foreigner who claimed to have high-level Russian connections, and the agreement was unsealed Monday. Court documents described extensive efforts Papadopoulos made to try to broker connections with Russian officials and arrange a meeting between them and the Trump campaign, though some emails show his offers were rebuffed.

The charges collectively show how Mueller is aggressively probing the lives of those in President Trump’s orbit — digging into their personal finances while also exploring whether they might have coordinated, or tried to coordinate, with Russia to influence the 2016 election.

Papadopoulos ultimately admitted to lying to the FBI about his interactions with people he thought had connections with the Russian government. He has been cooperating with investigators for months, according to a court filing, and has met with the government on “numerous occasions to provide information and answer questions.”

“Manafort and Gates are expected to make their first court appearance before U.S. Magistrate Judge Deborah A. Robinson at 1:30 p.m.”

“The charges against Manafort and Gates did not reference the Trump campaign, a point President Trump noted on Twitter Monday. “Sorry, but this is years ago, before Paul Manafort was part of the Trump campaign. But why aren’t Crooked Hillary & the Dems the focus?????” Trump wrote.”

“Papadopoulos’s case appears directly related to the investigation of possible coordination between the Trump campaign and Russia.”

“In a January 2017 interview with the FBI, Papadopoulos told the agency that a London-based professor claimed to him he had “dirt” on Hillary Clinton, including “thousands of emails,” but Papadopoulos viewed him as a “nothing.”

“In reality, according to his plea, Papadopoulos understood the man had connections to Russian government officials, and he had treated him very seriously as he tried to arrange a meeting between the Trump campaign and Russian officials.”

“The special counsel alleged that for nearly a decade Manafort and Gates laundered money through scores of U.S. and foreign corporations, partnerships and bank accounts, and gave false statements to the Justice Department and others when asked about their work on behalf of a foreign entity.”

“According to the indictment, Manafort and Gates arranged to hire two Washington-based lobbying firms to work on behalf of their Ukrainian clients, arranging meetings with U.S. officials and boosting their public image in the United States.”

“Prosecutors say, however, that Manafort and Gates arranged for a Brussels-based nonprofit to nominally hire the companies to hide the fact that their work was for Ukrainian government officials and would otherwise require registration under the Foreign Agents Registration Act.”

In fact, prosecutors allege, Manafort was communicating directly with then-Ukrainian President Viktor Yanukovych about the effort, promising in 2012 to provide him weekly updates about the effort.

“To further obscure Ukrainian involvement in the lobbying effort, prosecutors say payments to the Washington firms were routed through obscure offshore companies. Prosecutors say that when the Department of Justice approached Manafort and Gates in 2016 and 2017 about whether they should have registered as foreign agents for the work, they responded with false and misleading letters, indicating they had not directed the lobbying effort and asserting they did not hold records reflecting their work, even though later searches showed they did, according to the indictment.”

“The men made tens of millions of dollars for themselves, the special counsel alleged. From 2008 to 2014, according to the indictment, Manafort arranged to wire $12 million from offshore accounts to pay for personal expenses — including $5 million to a home renovation contractor in the Hamptons, more than $1.3 million to a home entertainment and lighting vendor based in Florida, $934,000 to an antique rug dealer in Alexandria, and $849,000 to a men’s clothier in New York.”

“Mueller was appointed in May to oversee the probe of possible coordination between the Trump campaign and Russia, taking over work that the FBI had begun in July 2016. Their interest in Manafort, though, dates back to at least 2014 — long before Manafort was connected to the Trump campaign.”

“Investigators have shown interest in a broad array of other topics.”

“Those include meetings the president’s son-in-law, Jared Kushner, had with the Russian ambassador and a banker from Moscow in December, and a June 2016 meeting at Trump tower involving the president’s son, Donald Jr., and a Russian lawyer. Mueller’s team has requested extensive records from the White House, covering areas including the president’s private discussions about firing James B. Comey as FBI director and his response to news that Flynn was under investigation, according to 2 people briefed on the requests.”

“Mueller is also investigating whether Trump obstructed justice leading up to Comey’s firing. His team has been actively presenting records and bringing witnesses before the grand jury in D.C. for the last 3 months.” “FBI agents working for Mueller raided Manafort’s home in Alexandria in late July, armed with a search warrant that allowed them to enter at dawn without warning the occupants. Such an invasive search is only allowed after prosecutors have convinced a federal judge that they have evidence of a crime and they have reasonable concern that key evidence could be destroyed or withheld.”

“”Prosecutors also warned Manafort they planned to indict him, according to two people familiar with the exchange. People close to Manafort and Gates, though, said the indictment came as a surprise to both.”

“Though both men knew Mueller had been closely scrutinizing their behavior, they had expected some kind of alert when an indictment was imminent. Even over the weekend, they were telling people close to them that they had received no such notification and did not believe they were the subject of the seal charges.”

“The tactic might suggest Mueller hoped to use the element of surprise against the 2 men to potentially stun them into a desire to cooperate against other members of Trump’s team.”