aside Timeline Of Watergate Investigation Against President Richard Nixon

For sound reasons, “we the People” sometimes become frustrated as to how long the FBI’s Special Counsel Richard Mueller III Trump Russian probe is taking. It may be helpful to remind ourselves that the Watergate hearings/ investigation took over 2 years from 1972-1974.

On May 30, 2017 of the PBS Hour published the following timeline report, “The complete Watergate timeline (it took longer than you realize).”

“Critics have been quick to compare the controversy surrounding the White House and Russia to the Watergate scandal that forced President Richard Nixon to resign. But the Watergate drama took longer to unfold — more than two years — than many people may remember. Here’s a quick refresher of the events that led to Nixon’s resignation, along with a reminder that despite the recent pace of news in Washington, political crises are often slow-burning affairs.”

“Five men are arrested while trying to bug the Democratic National Committee’s headquarters at the Watergate, a hotel and office building in Washington, D.C. A day later, White House press secretary Ronald Ziegler famously called the Watergate break-in a “third-rate burglary.” At a press conference June 22, President Nixon denied that the White House was involved in the incident.”

“The Washington Post reported that a $25,000 check intended for Nixon’s 1972 reelection campaign was deposited in the bank account of one of the Watergate burglars. It was one of the first developments linking the DNC break-in to Nixon’s campaign.” 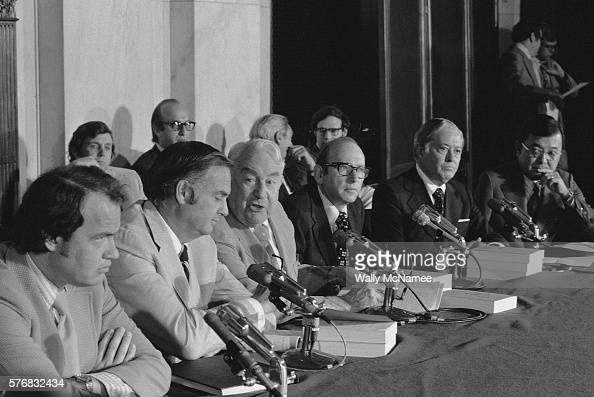 “The Post reports the FBI had concluded the Watergate break-in was part of a broader spying effort connected to Nixon’s campaign. News of the FBI’s findings came two weeks after the Post reported that former Attorney General John Mitchell, who stepped down earlier that year, had controlled a secret fund that paid for spying on the Democratic Party.”

“The trial for the Watergate break-in begins.”

“G. Gordon Liddy, a former Nixon aide, and James McCord, a one-time Nixon aide and former CIA operative, are convicted for their role in spearheading the Watergate break-in.”

“Attorney General Elliot Richardson appoints Archibald Cox as special prosecutor to lead the investigation into Nixon’s reelection campaign and Watergate. Cox was a respected attorney and law professor, and had served as the United States solicitor general under Presidents John F. Kennedy and Lyndon Johnson.”

“Cox’s appointment comes one day after the Senate Watergate Committee begins its public hearings on the scandal. The committee’s hearings are nationally televised and, along with Cox’s investigation, marke a new phase in the Watergate scandal. It is at these Senate hearings that then-Sen. Howard Baker, R-Tenn., asks one of the most famous questions in American politics: “What did the president know, and when did he know it?”

“Nixon, who taped his conversations and calls in office, refuses to give Cox and Senate Watergate investigators the recordings, which became known as the “Nixon tapes.” The tapes were believed to contain critical evidence of a cover-up of Nixon’s involvement in the break-in; the previous month, Dean, the former White House counsel, acknowledged that he had talked with Nixon about the Watergate matter dozens of times. After Nixon refused to turn the tapes over, both Cox and Senate investigators issue subpoenas for the material.”

“The day that becomes known as the “Saturday Night Massacre.” Attorney General Richardson and Deputy Attorney General William Ruckelshaus resign in the same night after refusing Nixon’s order to fire Cox. Robert Bork, the solicitor general who was acting as attorney general, then followed Nixon’s order and fired Cox. Nixon’s push to oust Cox, who was leading the independent investigation into the White House misconduct, sparked intense criticism across the political spectrum. Four weeks later, on Nov. 17, Nixon issued his memorable denial: “I’m not a crook.”

“In a unanimous ruling, the Supreme Court orders Nixon to release the tape recordings. The decision came two months after the White House gave the House Judiciary Committee edited transcripts of Nixon’s conversations, but did not turn over the actual tapes.”

“The House Judiciary Committee passes three articles of impeachment against Nixon, for obstruction of justice, misuse of power and contempt of Congress. By approving the charges, the committee sent the impeachment to the floor for a full House vote, but it never occurred.”

“Nixon resigns. In his resignation speech, Nixon said: “I have never been a quitter. To leave office before my term is completed is abhorrent to every instinct in my body. But as president, I must put the interest of America first.”