Sam Irvin of the Watergate era who led the inquiry into possible criminal activities by President Richard Nixon, starting in 1973, played the role of what the FBI’s Special Counsel Robert Mueller III is doing today with the Trump-Russian probe.

History has it that it was because of Sam Ervin’s reputation for integrity and stubborn independence that he was chosen to head the Senate Select Committee to investigate the Watergate scandal in 1973.

His folksy humor, love of Shakespeare endeared him to the TV watching American public.

As per a 4/24/1985 LA Times report, “Ervin had never been a partisan Democrat. He had supported President Richard M. Nixon on the Vietnam War and had voted to sustain some Nixon vetoes. In short, as Mansfield put it, Ervin “was the only man on either side of the aisle who would have the respect of the Senate as a whole.”

“The hearings were supposedly to recommend legislation that would prevent a recurrence of the scandals that ultimately toppled Nixon. Ervin said it was “more important that the American people get the truth than a few people go to jail.”

“He opened the televised hearings on May 17, 1973, by stating that the committee’s purpose was to “probe into assertions that the very system has been subverted.” He charged that if those accusations were true, Watergate was a conspiracy to “steal from Americans their most precious heritage, the right to vote in a free election.” 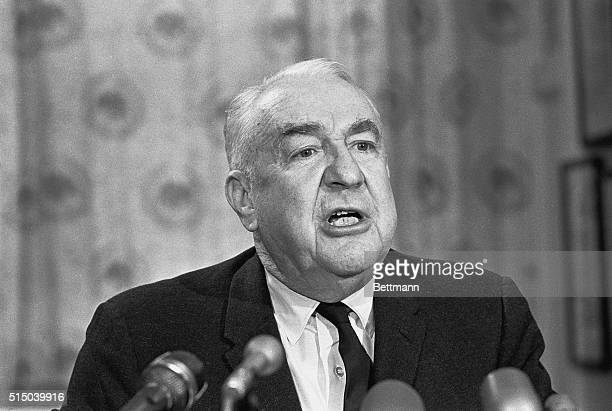 “Over objections that he was pressing witnesses too hard, Ervin replied: “I’m just an old country lawyer, and I don’t know the finer ways to do it. I just have to do it my way.”

As the hearings wound on, Ervin quoted Shakespeare, telling one witness who claimed he had perjured himself out of loyalty to Nixon:

“Had I but served my God with half the zeal I served my king, he would not in mine age have left me naked to mine enemies.”

On September 13, 1973, Charles Perry of RollingStone penned the following report. “Sermon on the Hill: A Sam Ervin Sampler.”

“Samuel James Ervin, Jr., the son of a North Carolina lawyer, reluctantly left the judicial bench in 1946 to run for a state office vacated by his brother’s death; then reluctantly entered national politics in 1954 and straightaway led the fight to censure Senator Joseph McCarthy, the Cold War witch hunter. Courage had gone in short supply in the Senate at that time, but Sam Ervin seemed to have it to spare, as his military decorations from World War I—gallantry in action citations, Purple Heart and all—attested.”

“Today he faces the last of the Cold War warriors, Richard M. Nixon, with the same determined spirit. The contrast between the two men could not be clearer. It showed in every newspaper or magazine that ever ran photos of them side by side. The lines in their faces say plainly which man is accustomed to smiling. For the first time since the ill-managed McGovern campaign there is opposition to Nixon’s unprincipled lust for personal power, and an effective spokesman against the program of repression Nixon put into effect after he took over the White House.”

“More extraordinary than Ervin’s sense of humor is his uncompromising belief in the Constitution as a basis of government. A “strict constructionist,” presumably after Mr. Nixon’s heart, he has phrased his passionate Constitutionalism in resounding measures that owe much to Shakespeare and the Bible, but surely as much to the great jurists of Anglo-American common law.” 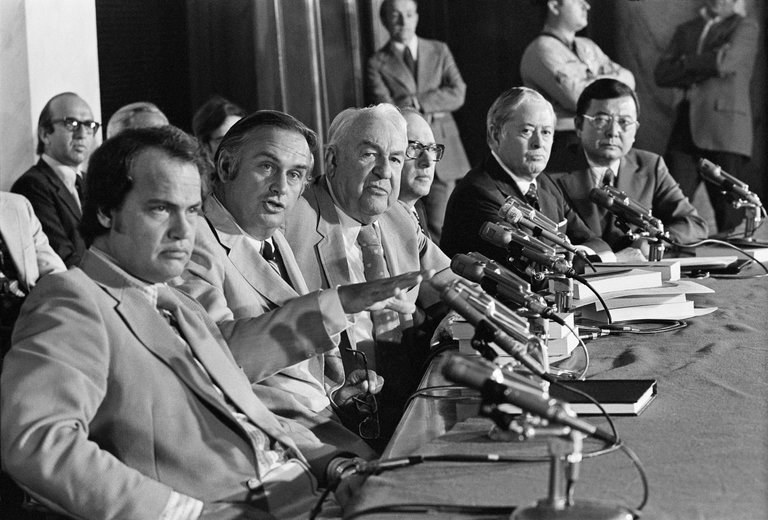 “I don’t think we have any such thing as royalty or nobility that exempts them,” says Ervin of the White House, and one realizes how much the issues of the American Revolution are living ones to him and not eighth-grade clichés. He has been a consistent and eloquent enemy of such ominous inspirations as no-knock laws and military surveillance of civilians.Ervin is a States’ Rights man on Constitutional grounds. Ironically, he is vilified by rightists who just a year ago were complacent “strict constructionists”: Jim Fuller of the Charlotte (N.C.) Observer reports his newspaper gets calls at all hours of the day and night, some from as far away as Houston, demanding that “that fat, senile old man” lay off the President. “The most common threat,” Fuller says, “is castration.” Ervin doesn’t look worried.” 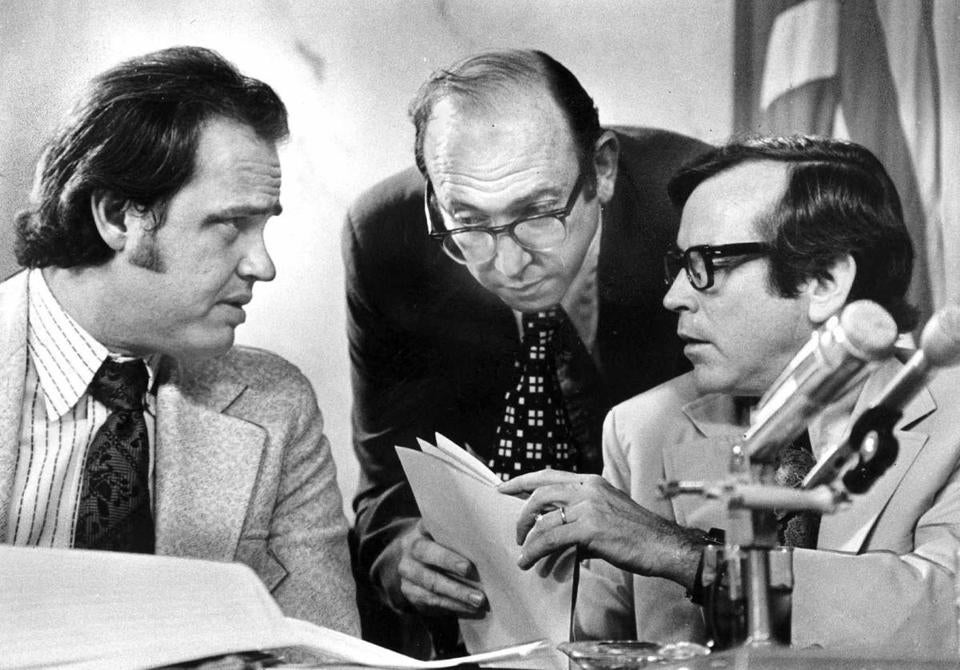 A Black Cloud of Distrust

“We are beginning these hearings today in an atmosphere of utmost gravity. The questions, that have been raised in the wake of the June 17th break-in, strike at the very undergirding of our democracy. If the many allegations made to this date are true, then the burglars who broke into the headquarters of the Democratic National Committee at the Watergate were in effect breaking into the home of every citizen of the United States.”

“If these allegations prove to be true, what they were seeking to steal was not the jewels, money or other property of American citizens, but something much more valuable—their most precious heritage, the right to vote in a free election. Since that day, a mood of incredulity has prevailed among our populace, and it is the constitutional duty of this committee to allay the fears being expressed by the citizenry, and to establish the factual bases upon which these fears have been founded.The Founding Fathers, having participated in the struggle against arbitrary power, comprehended some eternal truths respecting men and government. They knew that those who are entrusted with power are susceptible to the disease of tyrants, which George Washington rightly described as “love of power and the proneness to abuse it.” For that reason, they realized that the power of public officers should be defined by laws which they, as well as the people, are obligated to obey.” 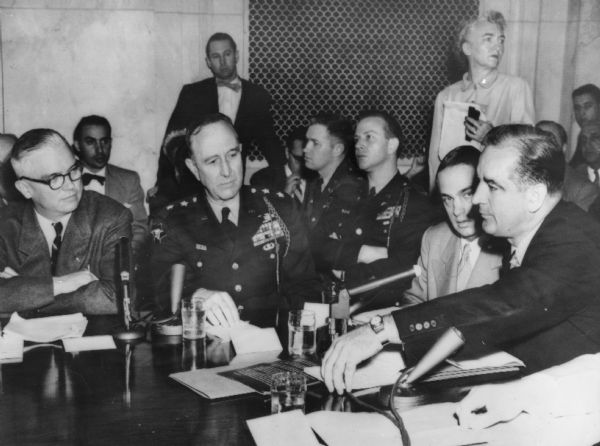 “The Constitution, later adopted amendments and, more specifically, statutory law provide that the electoral processes shall be conducted by the people, outside the confines of the formal branches of government, and through a political process that must operate under the strictures of law and ethical guidelines, but independent of the overwhelming power of the government itself. Only then can we be sure that each electoral process cannot be made to serve as the mere handmaiden of a particular Administration in power.” 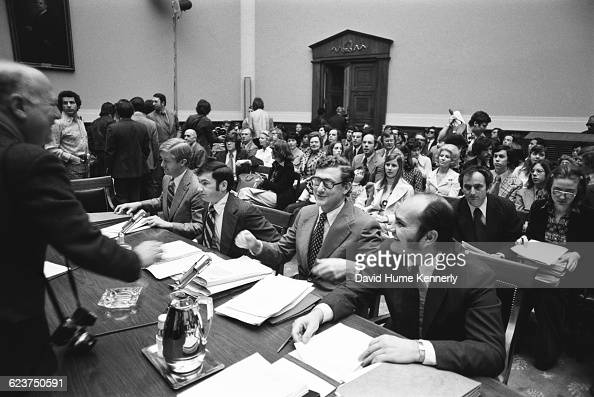 “The accusations that have been leveled and the evidence of wrongdoing that has surfaced has cast a black cloud of distrust over our entire society. Our citizens do not know whom to believe, and many of them have concluded that all the processes of government have become so compromised that honest governance has been rendered impossible. We believe that the health, if not the survival, of our social structure and of our form of government requires the most candid and public investigation of all the evidence…. As the elected representatives of the people, we would be derelict in our duty to them if we failed to pursue our mission expeditiously, fully, and with the utmost fairness. The nation and history itself are watching us. We cannot fail our mission.”