Now that many powerful men have been making headline news as previously harmed women come forward to tell all about how these leaders used their power to involve non-consenting women with their sexual peccadilloes, this may be an opportune time to review the republican President Donald Trump’s past transgressions towards young ladies.

There is a lot of anger directed towards the president, his team members and the sycophant republican legislators by women who don’t want to accept as normal a president who was propelled into the White House with a history of  bragging about having been able to grab women’s private body parts with impunity and how he felt entitled to barge into pageants’ dressing rooms, so that he could ogle the contestants in various stages of undress.

RollingStone has provided a time-line of Donald Trump’s inappropriate adventures over time while he was present at pageants.

On October 12, 2016, Tessa Stuart of RollingStone penned the following report, “A Timeline of Donald Trump’s Creepiness While He Owned Miss Universe.” (“”From walking into a teen dressing room to joking about his obligation to sleep with contestants, Trump’s a storied pageant creep.)

“Donald Trump was forced to sell the Miss Universe organization  which also includes sister scholarship programs Miss USA and Miss Teen USA – in 2015 after his incendiary comments about Mexicans drove away broadcasters NBC and Univision. But Trump owned the pageant for nearly two decades, during which time he would have had the opportunity to come into contact with nearly 4,000 beauty queens.”

“On the heels of the damaging videotape on which Trump and former Access Hollywood host Billy Bush salivated over Days of Our Live actress Arianne Zucker, and joked about sexually assaulting women, came allegations that Trump entered the Miss Teen USA changing room where girls as young as 15 were in various states of undress.” “Mariah Billado, Miss Teen Vermont 1997 told BuzzFeed, “I remember putting on my dress really quick because I was like, ‘Oh my god, there’s a man in here.'” Three other teenage contestants from the same year confirmed the story. The former pageant contestants discussed their memories of the incident after former Miss Arizona Tasha Dixon told Los Angeles’ CBS affiliate that Trump entered the Miss USA dressing room in 2001 when she was a contestant.”

“He just came strolling right in,” Dixon said. “There was no second to put a robe on or any sort of clothing or anything. Some girls were topless. Others girls were naked. Our first introduction to him was when we were at the dress rehearsal and half-naked changing into our bikinis.”

“Dixon went on to say that employees of the Miss Universe Organization encouraged the contestants to lavish Trump with attention when he came in. “To have the owner come waltzing in, when we’re naked, or half-naked, in a very physically vulnerable position and then to have the pressure of the people that worked for him telling us to go fawn all over him, go walk up to him, talk to him, get his attention…”

“The Trump campaign did not offer a response to either story, but in a 2005 appearance on Howard Stern’s show, Trump bragged about doing exactly what the women describe. “I’ll go backstage before a show, and everyone’s getting dressed and ready and everything else,” he said.”

His position as the pageant’s owner entitled him to that kind of access, Trump explained, seemingly aware that what he was doing made the women uncomfortable. “You know, no men are anywhere. And I’m allowed to go in because I’m the owner of the pageant. And therefore I’m inspecting it… Is everyone OK? You know, they’re standing there with no clothes. And you see these incredible-looking women.”

1996
When he bought the Miss Universe pageant family, Trump told Stern in 2005, the pageant was “a sick puppy.” The relative hotness of contestants had seriously deteriorated in the preceding years, he explained to Stern, because the judges had begun placing a greater emphasis on brains over beauty. “They had a person that was extremely proud that a number of the women had become doctors,” Trump said. “And I wasn’t interested.”

“The first Miss Universe crowned on Trump’s watch was Miss Venezuela, Alicia Machado. Hillary Clinton famously invoked Trump’s treatment of Machado during the first presidential debate. Machado remembers him calling her “Miss Piggy” because she gained weight and “Miss Housekeeping” because she’s Latina. Trump invited reporters to observe Machado exercising, against her protests. She told The New York Times earlier this year, “I was about to cry in that moment with all the cameras there. I said, ‘I don’t want to do this, Mr. Trump.’ He said, ‘I don’t care.'”

“Also that year, Miss Utah, Temple Taggart, recalls Trump kissed her against her wishes. “He kissed me directly on the lips. I thought, ‘Oh my God, gross.’ He was married to Marla Maples at the time. I think there were a few other girls that he kissed on the mouth. I was like, ‘Wow, that’s inappropriate,’

” Taggart told The New York Times. She says he did the same thing a few months later at Trump Tower, where he had invited her to discuss her career. To succeed in the entertainment industry, Trump advised 21-year-old Taggart to lie about her age. “We’re going to have to tell them you’re 17,” she remembers Trump saying.”

2005
The same year Trump bragged to Howard Stern about barging into the dressing room while the women were changing, he declined to say whether he’d ever slept with a contestant. “It could be a conflict of interest. … But, you know, it’s the kind of thing you worry about later, you tend to think about the conflict a little bit later on,” Trump joked. A few beats later, he rethought his stance, joking that, as the pageant’s owner, it might be his “obligation” to sleep with the contestants.

“Miss California, Carrie Prejean, recalled in her memoir the way Trump would pit the women against each other, asking them to rate each other’s looks on the spot.”

“Donald Trump walked out with his entourage and inspected us closer than any general ever inspected a platoon. He would stop in front of a girl, look her up and down, and say, “Hmmm.” Then he would go on and do the same thing to the next girl. He took notes on a little pad as he went along. After he did this, Trump said: “O.K. I want all the girls to come forward.” …

“She took one more step forward.”

“Tell me, who’s the most beautiful woman here?”

“It became clear that the point of the whole exercise was for him to divide the room between girls he personally found attractive and those he did not. Many of the girls found the exercise humiliating. Some of the girls were sobbing backstage after he left, devastated to have failed even before the competition really began to impress “The Donald.” 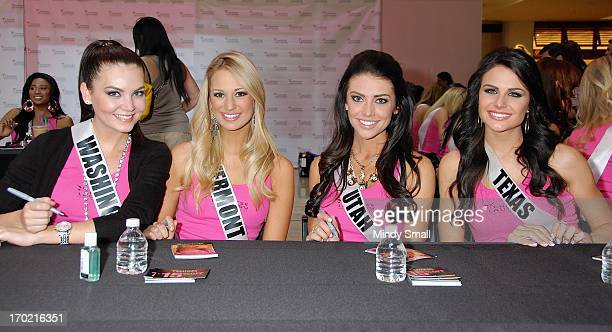 “Her recollection was boosted by an audio recording from the same year, obtained by TMZ, on which Trump can be heard asking the contestants for help picking out some of the best-looking women before the contest itself took place. “We get to choose a certain number [of contestants who will be guaranteed to make it through the first round]. You know why we do that? Because years ago when I first bought it, we chose ten people, I chose none and I get here and the most beautiful people were not chosen. And I went nuts. So we call it the Trump Rule.”

“Later in the same tape, Trump can be heard talking up his son, Eric – who also served as the contest’s judge – to the assembled beauty queens: “I have a son, he’s very handsome; he’s 6-foot-6, and he was number one in his class in school.”

2010
Trump boasted to David Letterman that when he bought Miss USA, “I made the heels higher and the bathing suits smaller.”

2013
Cassandra Searles, Miss Washington 2013, recalls that when she was a contestant, the businessman demanded the women redo their introductions when they failed to look Trump in the eye. In a Facebook post this year, Searles called Trump a “misogynist” who “treated us like cattle” and “lined up so he could get a closer look at his property.” Other contestants from the same year, like Paromita Mitra of Mississippi, bolstered Searles recollection. Mitra commented, “I literally have nightmares about that process.

Searles added in a comment on her initial post’s thread, “He probably doesn’t want me telling the story about that time he continually grabbed my ass and invited me to his hotel room.”

2015
The 2015 Miss USA pageant was set to take place the first week of July – three weeks after Trump characterized Mexicans as rapists and criminals during his campaign kick-off event. One by one, the pageant’s hosts, judges, sponsors, and broadcasters dropped out. Trump was forced to sell the pageants to WME in September 2015.