The republican President Donald J. Trump and his administration’s officials have been earning the reputation for being less than truthful. There is a definite “lack of trust factor” that is becoming an accepted standard which is not acceptable.

The following fact checks reports has been presented  by the Washington Post:

(By Glenn Kessler) “No, President Trump hasn’t ‘done more by far’ than Obama to fight ISIS.”

“The president has frequently repeated some variation of his claim that his administration, “has done more against ISIS in nine months than the previous administration [did] during its whole administration — by far, by far.” His latest victory lap came after the fall of Raqqa, the group’s de facto capital in Syria.”

“But much of this territory is empty desert. The plans to retake the key cities of Mosul and Raqqa were developed and launched under Obama. Experts do credit Trump with some tactical shifts that may have stepped up the tempo, but the number of civilian deaths has soared as a result, according to official figures.”

“Other metrics, such as air power, provide a better measure of an administration’s effort, experts said. Under Trump, coalition forces have only flown 23 percent of the total sorties and dropped 36 percent of the air munitions used.”

A president taking credit for a successful outcome started by his predecessor is a time-honored tradition. That still does not make it right.

The U.S. may have the largest reduction in carbon emissions but it is still the largest emitter

EPA Administrator Scott Pruitt trotted out the United States’ progress on carbon emissions saying, “we have reduced our CO2 footprint by over 18 percent, almost 20 percent, from 2000 to 2014.” He continued saying the U.S. is leading “the world” where countries like China and India don’t “have to take any steps with CO2 reductions until the year 2030.”

According to the EPA, since 2000 overall energy-related CO2 emissions have only fallen 7.5 percent. Pruitt is referring to the average per capita decrease instead of the overall decrease, without actually making that clear.

With respect to China and India, Pruitt’s compares their overall decreases in carbon emissions to per capita decreases in the United States. Stepping back and looking at the per capita production of carbon in all three countries, the United States produced more than double the emissions of China and eight times more than India. (The Fact Checker has previously awarded Pruitt Four Pinocchios for similar claims.) 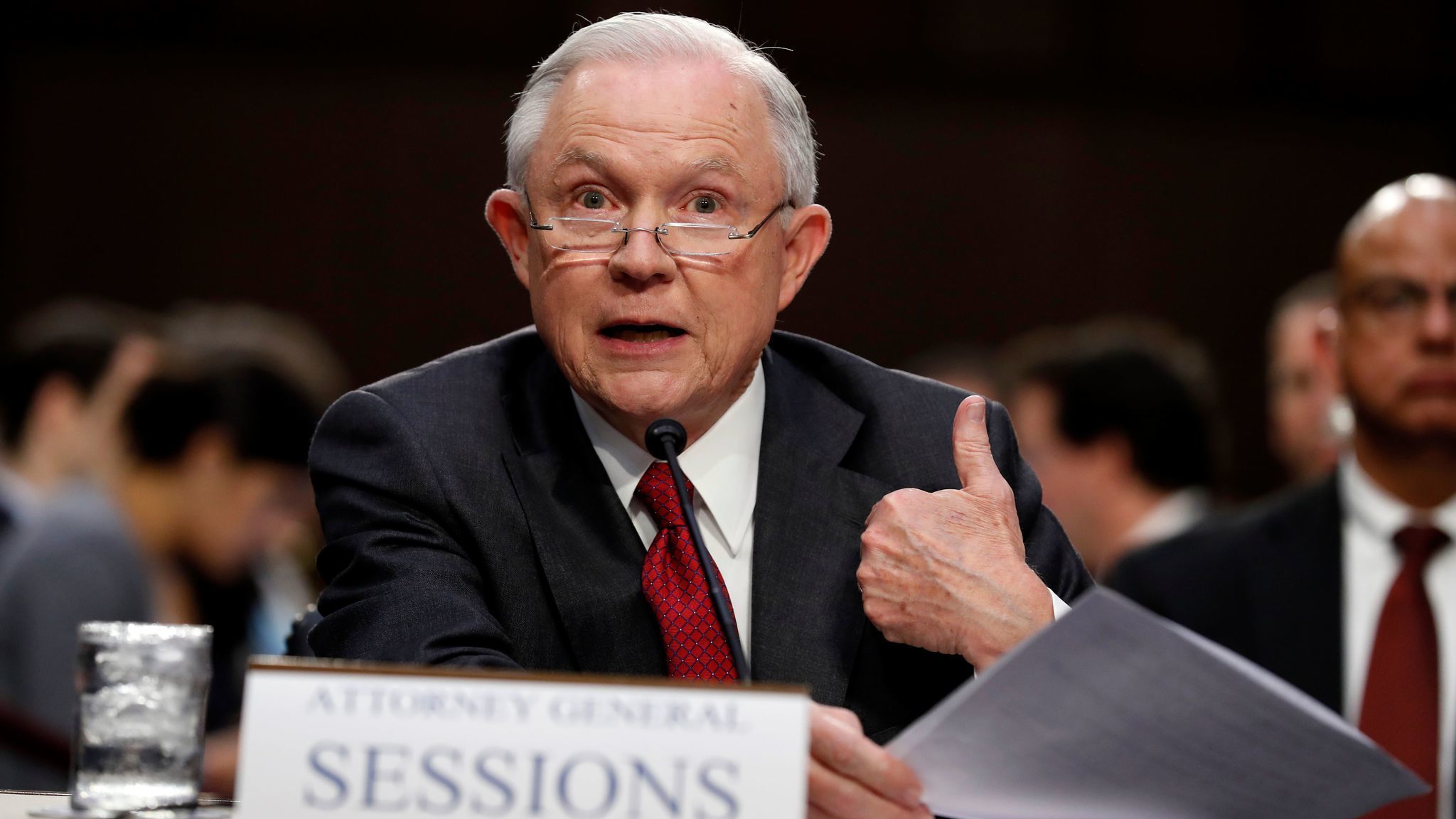 “We also have dirty immigration lawyers who are encouraging their otherwise unlawfully present clients to make false claims of asylum providing them with the magic words needed to trigger the credible fear process.”

On Oct. 8, President Trump released a list of strict immigration policies that include funding for a border wall with Mexico, restricting federal grants to “sanctuary cities,” and a scaling back of legal pathways to citizenship. Just a few days later, on Oct. 12, Attorney General Jeff Sessions encouraged Congress to pass the administration’s legislative priorities to solve the “crisis at our borders.”

“In a speech, Sessions described an immigration system rife with “fraud and abuse” which paves the way for millions of immigrants to enter the country illegally. Sessions zeroed in on the asylum system in the US, asserting that “dirty immigration lawyers” are coaching their clients to make “fake claims” to trigger “credible fear” proceedings so they can stay in the US.”

“Sessions asserts immigration lawyers are coaching their clients to use the “magic words to trigger the credible fear process” and stay in the United States.”

“Most credible fear claims occur after a person is caught by Customs and Border Protection travelling through legal points of entry without proper paperwork or crossing the border illegally via land or sea. In these cases, the foreign national is detained and subject to an expedited deportation.”

“But if the foreign national claims he or she would face persecution or torture should they return home, the removal process is halted while an immigration official determines the merit of the claim. If an official determines the subject has “credible fear,” the case is referred to an immigration Judge for a full hearing. As of 2009, immigrants determined to have a legitimate claim are eligible for parole from detention, provided they are not a security risk, as they wait their court day.”

“To make his case that most of these claims are illegitimate, Sessions cites U.S. Citizenship and Immigration data on credible fear proceedings in the United States. In 2009, there were roughly 5,500 credible fear cases. By 2016, that number had skyrocketed to 94,000. Sessions is particularly concerned with the subset of cases in which people crossed over the border illegally and claimed fear of return. In 2016, these claims made up 69,000 of the total 94,000 cases.”

“Are immigration lawyers to blame for this increase?”

“When asked what data Sessions is citing to make his case against immigration lawyers, a spokesperson for the Justice Department pointed to a 2015 report by the Government Accountability Office assessing the risk of fraud in the asylum process, which includes credible fear claims. The GAO report found that USCIS and the DOJ’s Executive Office for Immigration Review:”

“However, the report does highlight a few cases of fraud, noting that from 2010 to 2014 USCIS terminated asylum status for 374 people because of fraud. And that a 2014 investigation in New York resulted in fraud charges against 30 individuals who were connected to roughly 4,500 asylum applications. Additionally, in 2014, an immigration consultant in Los Angeles, who had been linked to 800 asylum applications, pleaded guilty.”

“To be clear, USCIS can’t know how widespread fraud in the asylum system is because they aren’t equipped to assess it. ”

“So what accounts for the surge in credible fear cases?”

“Immigration experts say the rise in credible fear claims reflects the influx in people fleeing violence, and human rights abuses in Central America’s Northern Triangle – Guatemala, Honduras, and El Salvador. In 2016,  The Department of Homeland Security announced an initiative to help those escaping the “humanitarian crisis” and seeking refuge in the U.S..”

“Sessions takes issue with credible fear claims made by people crossing the border illegally. Since 2000, the number of people crossing the border illegally from countries other than Mexico has increased fourfold as the number of people from Mexico has steadily declined. Many emigrating from Mexico are considered economic migrants.” “And the credible fear claims reflect these immigration trends. A 2015 report from the Center for Immigration Studies, found that immigrants from El Salvador, Guatemala, and Honduras made up 80 percent of all new credible fear applications since 2014.” “Very few people have had a chance to speak with an immigration lawyer before the credible fear stage,” said Hipsman. “Any instructions to claim fear at that point would be coming from smugglers.”

“That’s because expedited removal, the pre-requisite for credible fear claims, only applies to people picked up within 100 miles of the border who have been in the country for fewer than 14 days. The detainees can consult with lawyers or other counselors before their initial interview, but the interview takes place after the claim of credible fear is made.”

“A 2013 report by Human Rights First found that nearly 80 percent of immigrants in detention centers do not have a lawyer during their immigration proceedings.”

“In 2016, USCIS found that 80 percent of the 69,000 inland cases were legitimate, requiring a hearing in immigration court. These cases are reviewed by trained immigration officials, using guidelines set out by USCIS. In 2014, USCIS.” “Sessions claims “dirty immigration lawyers,” are coaching their clients to make false claims to stay in the United States. But his claim rests on little evidence. Sessions seems to be confusing the details of the credible fear process. Most credible fear claims happen at the border without the consultation of lawyers.”

“The data shows (that about 80% of the time) that people from Central America, where violence and humanitarian abuses have surged, make up most of the credible fear claims. ”

“Sessions lacks the evidence to make his claim but he uses the lack of evidence in a dubious way, filling in the missing pieces with inflammatory rhetoric on immigration fraud and casting immigration lawyers in a negative light.”