aside Breitbart On Roy Moore And Tie In To Sinclair Broadcasting

The republican President Donald J. Trump’s administration appears to dangling the promise of the US government’s approval of AT&T’s planned merger with Time Warner, if Time Warner sells off the president’s media nemesis, CNN News.

While there may very well be sound reasoning for the US government deciding to not approve the merger, in this case, partisanship is definitely a factor. I am definitely not convinced by the president and his surrogates’ denials.

The above denials flies in the face of  of the republican FCC head, Ajit Pai, who as soon as he was on the job, backed the passage of a loophole which will allow right-wing conservative managed Sinclair Broadcasting to expand up to  233 stations that could reach 72 percent of American households.” This would be similar to a more right wing media giant than FOX TV  purchasing local stations to spread its conservative view of the news content to reach 72% of American households versus the standard national limit of 39%, but without TV viewers knowing that they’ll be watching conservative leaning shows, with Sinclair owned stations. The deal where Sinclair Broadcast executives expect to receive FCC approval for the purchase of the Tribune Media Co. is set for sometime in the fourth quarter of 2017.

How do these events tie the Roy Moore story and the Sinclair Broadcasting expose together?

Recently Steve Bannon pf Breibart and former Chief Strategist for President Trump, went on the record backing the candidacy of Judge Moore to become the next republican US senator from Alabama. In one of his Breitbart publications, he refers to a report by AL ABC affiliate WBMA 33/40’s 5 p.m. local news, where a political reporter Lauren Walsh supposedly sought out voters in Columbiana, AL to gauge their reactions to the Washington Post report that alleged Republican U.S. Senate hopeful Roy Moore engaged in inappropriate conduct with four teenage girls more than 34 years ago.

The impression given was that 100% of those who were contacted, supported the candidate Mr. Moore. What Mr. Bannon did not disclose was that the reporter only talked to four people and that this particular channel is owned by Sinclair Broadcasting with a conservative bent. 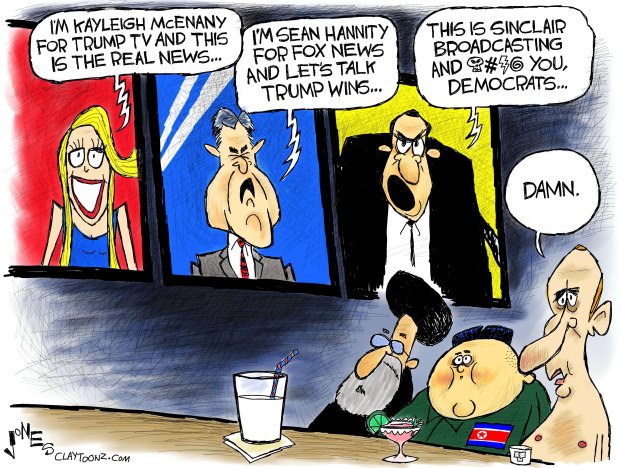 FCC HEAD AJIT PAI IS FOR APPROVING EXPANSION OF CONSERVATIVE OWNED SINCLAIR BROADCASTING”None of the respondents according to Walsh told her they believed the Post’s reporting.”

“It’s hard to believe the events that transpired yesterday,” Gordon Fluker of nearby Wilsonville, AL said to Walsh about the Washington Post report.

“Out of all the voters we spoke with Friday in Columbiana, we didn’t find one voter who believed the Washington Post report about Moore,” she said.

“Columbiana is the county seat of Shelby County, a county that is the home to many of Birmingham’s southern suburbs. The county is very Republican, and in last year’s presidential election, it went for Donald Trump by a 72-23 percent margin.”

Example of Steve Bannon’s Tactics in Support of Roy Moore

“Bannon was referring to recent revelations that Singer was involved — via the Washington Free Beacon, which he finances — in funding Fusion GPS’ initial research into Donald Trump, which eventually led to the infamous “Trump dossier” — a collection unsubstantiated and sordid allegations claiming Trump was compromised by the Russians.”