aside 2017 Pew Poll On Republicans and Democrats

On October 24, 2017, the Pew Research Center published the results of their 2017 summer study, “Political Typology Reveals Deep Fissures on the Right and Left”

This (summer 2017) study is based on surveys of more than 5,000 adults conducted over the summer. This was also the data source for our Oct. 6 report, “The Partisan Divide on Political Values Grows Even Wider.” These reports were made possible by The Pew Charitable Trusts, which received support for the surveys from The William and Flora Hewlett Foundation. 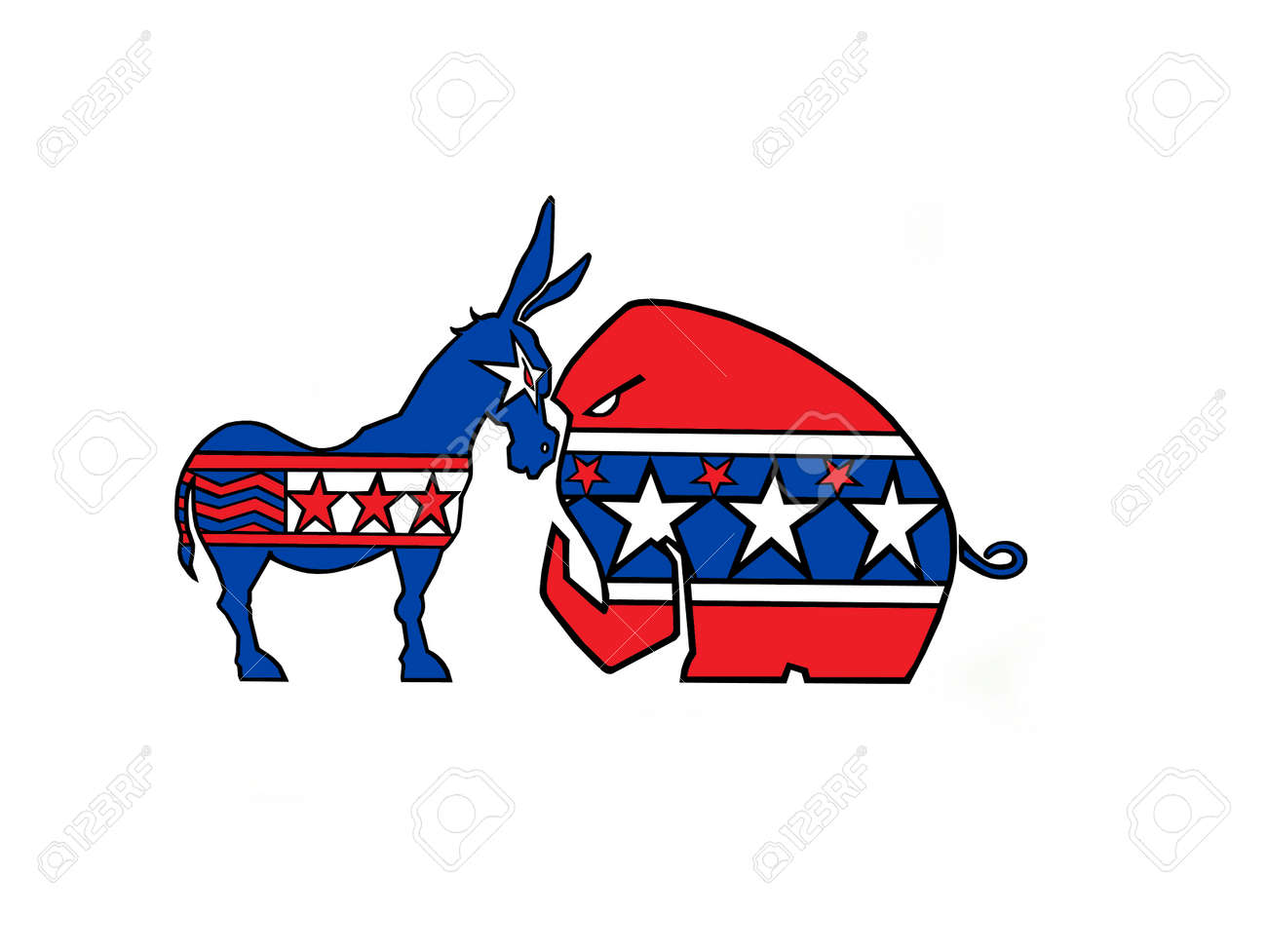 Divisions on the right

The political typology finds two distinctly different groups on the right – Core Conservatives and Country First Conservatives, who both overwhelmingly approve of Trump, but disagree on much else – including immigration and whether it benefits the U.S. to be active internationally.

Core Conservatives, who are in many ways the most traditional group of Republicans, have an outsized influence on the GOP coalition; while they make up just 13% of the public – and about a third (31%) of all Republicans and Republican-leaning independents – they constitute a much larger share (43%) of politically engaged Republicans.

This financially comfortable, male-dominated group overwhelmingly supports smaller government, lower corporate tax rates and believes in the fairness of the nation’s economic system. And a large majority of Core Conservatives (68%) express a positive view of U.S. involvement in the global economy “because it provides the U.S. with new markets and opportunities for growth.”

“Nearly two-thirds of Country First Conservatives (64%) – the highest share of any typology group, right or left – say that “if America is too open to people from all over the world, we risk losing our identity as a nation.”

“Alone among the groups in the GOP coalition, a majority of Market Skeptic Republicans support raising tax rates on corporations and large businesses. An overwhelming share (94%) say the economic system unfairly favors powerful interests, which places the view of Market Skeptic Republicans on this issue much closer to Solid Liberals (99% mostly unfair) than Core Conservatives (21%).”

“In contrast to Market Skeptic Republicans, New Era Enterprisers are fundamentally optimistic about the state of the nation and its future. They are more likely than any other typology group to say the next generation of Americans will have it better than people today. Younger and somewhat less overwhelmingly white than the other GOP-leaning groups, New Era Enterprisers are strongly pro-business and generally think that immigrants strengthen, rather than burden, the country.”

Divisions on the left

“The four groups in the Democratic coalition differ on a number of issues: While they all strongly support the social safety net, the Democratic-leaning groups are divided on government regulation of business, and government performance more generally. And like the GOP coalition, they disagree on U.S. global involvement.”

“While there have long been racial, ethnic and income differences within the Democratic coalition, these gaps are especially striking today. Reflecting the changing demographic composition of the Democratic base, for the first time there are two majority-minority Democratic-leaning typology groups, along with two more affluent, mostly white groups.”

“Solid Liberals are the largest group in the Democratic coalition, and they make up close to half (48%) of politically engaged Democrats and Democratic-leaning independents.”

“Disaffected Democrats have very positive feelings toward the Democratic Party and its leading figures. Their disaffection stems from their cynicism about politics, government and the way things are going in the country. This financially stressed, majority-minority group supports activist government and the social safety net, but most say government is “wasteful and inefficient.” A large majority of Disaffected Democrats say their side has been losing in politics, while fewer than half believe that voting gives them a say in how the government runs things.”

“A second majority-minority group, Devout and Diverse, faces even tougher financial hardships than Disaffected Democrats. Devout and Diverse also are the most politically mixed typology group (about a quarter lean Republican), as well as the least politically engaged. Like Disaffected Democrats, they are critical of government regulation of business. They also are the most religiously observant Democratic-leaning group, and the only one in which a majority (64%) says it is necessary to believe in God to be moral and have good values.”

“In addition to the eight main groups in the political typology, a ninth group – the Bystanders – is missing in action politically. Almost no one in this relatively young, largely minority group is registered to vote and most pay little or no attention to politics and government.”

Trump and the political typology

“While both parties are divided internally, partisanship remains a defining feature of American political life. Across the eight main typology groups, majorities either affiliate with or lean toward either the Republican or Democratic Party.”

“The power of partisanship is reflected in attitudes about Donald Trump. In the survey, conducted in June, Trump’s job ratings are more deeply polarized along partisan lines than those of any president in more than 60 years.

“However, even the Republican-leaning groups who strongly approve of Trump’s job performance are not all that positive about his conduct as president. Among the public overall, 58% say they don’t like Trump’s conduct, while just 16% like his conduct; 25% say they have mixed feelings.”

“The other GOP-leaning groups are divided in views of Trump’s conduct. About half of Market Skeptic Republicans (49%) say they have mixed feelings, while roughly equal shares say they like (24%) and don’t like (26%) his conduct. And among New Era Enterprisers, more express negative (39%) than positive (23%) views of Trump’s conduct, with 38% expressing mixed feelings.”

Political engagement and a look ahead to 2018

“The two largest groups in the political typology – Core Conservatives on the right and Solid Liberals on the left – make up an even larger share of their partisan coalitions when political engagement is factored in.”

“Core Conservatives are more likely than other GOP-leaning groups to say they follow politics and government most of the time and say they always vote. Consequently, while Core Conservatives make up about a third of Republicans and Republican-leaning independents overall (31%), they constitute a larger proportion of politically engaged Republicans (43%).”

“At the other end of the political typology, Solid Liberals constitute by far the largest proportion of politically engaged Democrats and Democratic-leaning independents.”

“Solid Liberals make up a third of all Democrats and Democratic leaners – but close to half (48%) of politically engaged Democrats. That is about the same proportion as the other Democratic-leaning groups combined.”

“The 2018 midterm elections are still more than a year away, but the two groups at either end of the political typology are already highly motivated by the battle for congressional control. More than eight-in-ten Solid Liberals (84%) say it matters a great deal to them which party wins control of Congress next year, the highest share of any typology group. Core Conservatives are next highest, at 77%.”

“At this point, other groups are less engaged by the struggle for partisan control of Congress. And the drop-off is particularly notable among three groups close to the middle of the typology. On the right, fewer than half of Market Skeptic Republicans (44%) and New Era Enterprisers (41%) say it matters a great deal which party wins control of Congress; on the left, just 44% of Devout and Diverse say the same.”

“The political typology sorts Americans into cohesive, like-minded groups based on their values and beliefs, as well as their partisan affiliation. The current study, which comes 30 years after the first political typology, is based on surveys conducted June 8-18 among 2,504 adults and June 27-July 9 among 2,505 adults, with a follow-up survey conducted Aug. 15-21 among 1,893 respondents.”

“The typology is not intended to measure changes over time in the electorate, but some of the internal party differences that were evident 30 years ago still persist today. For example, Core Conservatives are far more likely than Country First Conservatives to favor societal acceptance of homosexuality. In 1987, two roughly parallel groups – Enterprise Republicans and Moral Republicans – differed over a disputed social policy at that time, whether or not school boards should have the right to fire homosexual teachers.”

“There also have been long-standing divisions among Democratic groups over religion and morality. Today’s Solid Liberals, who overwhelmingly say that belief in God is not necessary to be moral, bear some resemblance to the Seculars and ’60s Democrats from that earlier era. Today’s Disaffected Democrats and Devout and Diverse – majority-minority groups who are much more likely than Solid Liberals to link belief in God with morality – are somewhat similar to the Partisan Poor and Passive Poor of three decades ago.”

“To be sure, there have been seismic changes in the nation and politics over the past three decades – and these are reflected in the political typology. The country has become far more racially and ethnically diverse. In 1987, both parties were overwhelmingly white and non-Hispanic; today, only the GOP is, while more than 40% of Democrats are nonwhite. Thirty years ago, one of the largest groups in the political typology were the New Dealers, an older, mostly white, mostly Democratic group who were relatively conservative on social issues but favored activist government. There is no equivalent group in today’s political typology.”

“There have been more recent changes as well, particularly in the GOP coalition. The two conservative Republican groups are divided over immigration, “openness” and America’s role in the world, as well as homosexuality. And for the first time, there is a Republican-leaning group that is deeply skeptical of business and the fundamental fairness of the nation’s economic system.”