Within a week from when the vast majority of countries either voted against or abstained from the United States public recognition of Jerusalem as the capital of Israel.

As per 12/25/17 Newsweek report, “Haley said there might be further budget cuts in the future. President Trump’s proposed 2018 spending budget would end funding for U.N. climate change programs and would cut funding to the United Nations Children’s Fund, also known as UNICEF, by 16 percent.”

This is how the President Trump’s administration, the bully of the world acts, but this tactic is not conducive towards winning and influencing friends in countries around the world. 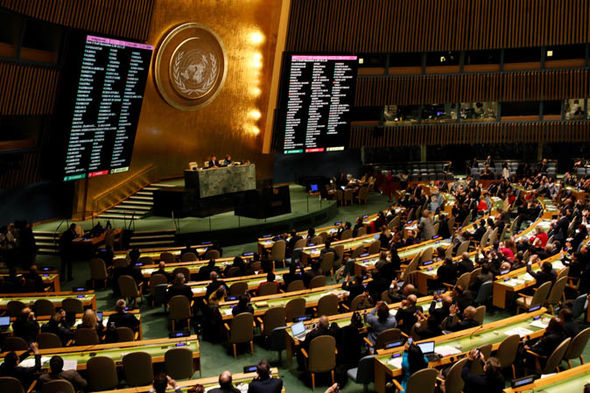 December 26, 2017, the AP and Edward Helmore of the Guardian penned the following report, “US to make at least %285 m cut to UN budget after vote on Jerusalem.”

“The US government has announced significant cuts in its United Nations budget obligations for 2018-19 in what will be interpreted as a further ratcheting up of pressure from the Trump administration looking to bend decision-making at the international body to its will.”

“In a statement released over the holiday, the US mission to the United Nations said next year’s budget would be slashed by over $285m and unspecified reductions would also be made to the UN’s management and support functions.”

“The announcement did not make clear the entire amount of the budget or specify what effect the cut would have on the US contribution.”

“We will no longer let the generosity of the American people be taken advantage of,” the US ambassador to the UN, Nikki Haley, said, adding that the “inefficiency and overspending” of the organization was well-known.”

“In her statement, Haley said she was pleased with the results of budget negotiations, and the US mission would continue to “look at ways to increase the UN’s efficiency while protecting our interests”.

“But the timing of the announcement sends a clear message. On Thursday, the general assembly voted 128-9 in favor of a resolution condemning the US recognition of Jerusalem as the capital of Israel. After the vote, Haley reminded the assembly that the US was “by far the single largest contributor to the UN” and would remember the vote “when we are called upon once again make the world’s largest contribution to the United Nations,and we will remember it when so many countries come calling on us, as they so often do, to pay even more, and to use our influence for their benefit.” “Before the vote, the US president, Donald Trump said at a cabinet meeting: “Let them vote against us. We’ll save a lot. We don’t care. But this isn’t like it used to be where they could vote against you and then you pay them hundreds of millions of dollars … We’re not going to be taken advantage of any longer.”

“On Sunday, Guatemala became the first country to follow the US decision to move its embassy to Jerusalem. Guatemala’s president Jimmy Morales made the announcement via Facebook.”