aside Protests Have Broken Out In Iran December 2017

The best the US can do at this point, is to stay out and to quiet regarding this internal conflict within Iran. the republican President Donald Trump’s natural inclination is to take credit for just about anything whether true or not. This is one time that it is literally crucial for the president to be mum on this issue.

If those who are protesting end up being effective in creating change to improve their status within Iran, this goal will not be enhanced with any commentary from the White House which has a record for ascribing to Iran, just about every evil that exists.

This is not the time for President Donald J. Trump to listen to the likes of his new best friend, Senator Lindsey Graham (R-SC) who wants to more aggressively insert the US into Iran’s affairs. 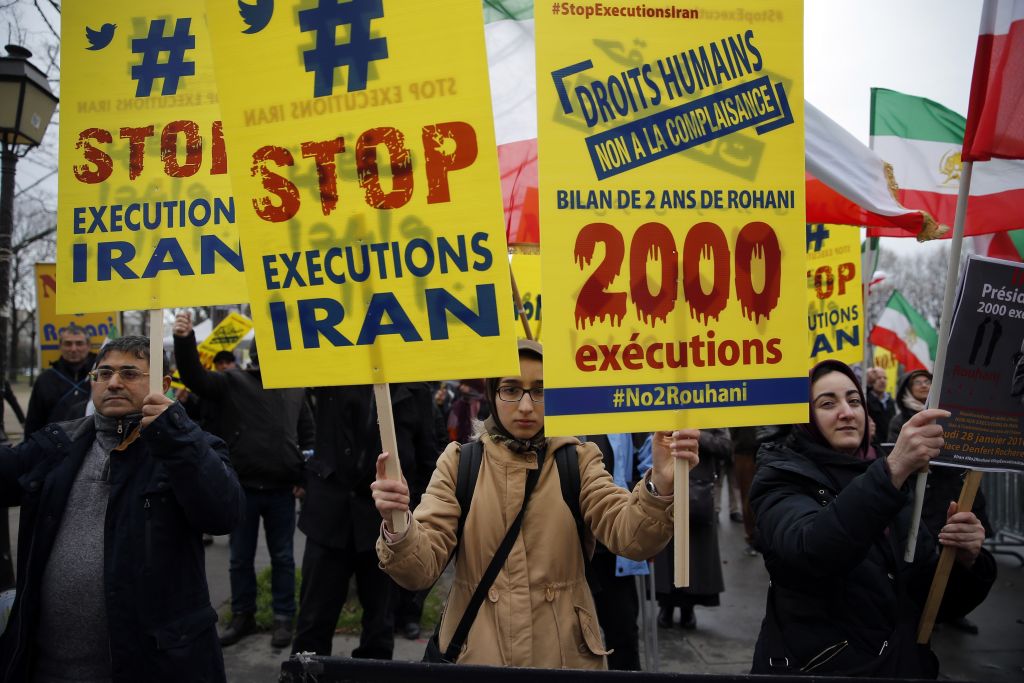 As per the 12/30, NY Times report by Philip Gordon, “To the extent that these protests are a sign of the Iranian public’s discontent with its leaders, they also belie Mr. Trump’s argument that the nuclear deal provided “urgently needed relief from the intense domestic pressure the sanctions had created.”

“On the contrary, while providing Iran some real economic benefits, the implementation of that deal over the last 2 years has also taken away the Iranian government’s ability to blame the US for all of its economic woes.” “Anti-government protests have broken out in several cities.”

“Thousands of people have joined the protests, with scores arrested.”

“A White House statement said Iranians were fed up with “the regime’s corruption and its squandering of the nation’s wealth to fund terrorism”.

“Meanwhile, authorities urged supporters to turn out for nationwide demonstrations on Saturday.”

“The rallies are commemorating the 2009 demonstrations held in support of the then conservative government of Mahmoud Ahmadinejad.”

“Those demonstrations were in response to protests by reformists over a disputed election which returned him to power.”

“The BBC’s Persian Service says thousands of people were likely to have been bussed into a rally in the capital Tehran.”

What was the US response?

“The Iranian government should respect their people’s rights, including their right to express themselves. The world is watching,” White House spokeswoman Sarah Huckabee Sanders said on Twitter.”

“The US State Department urged all nations “to publicly support the Iranian people and their demands for basic rights and an end to corruption”. 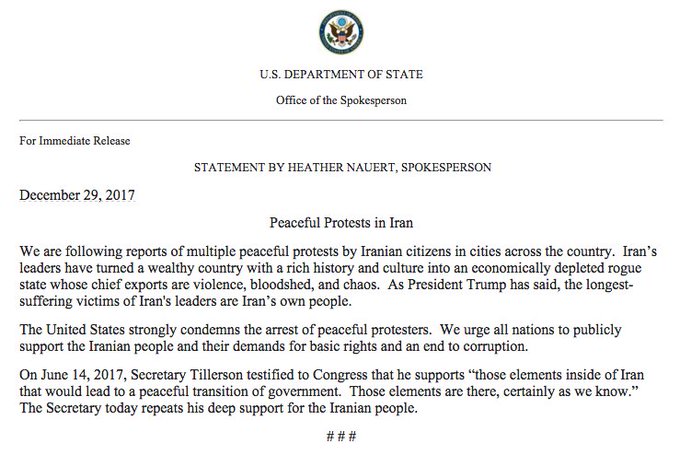 What is Iran saying about the protests? “

“First Vice-President Eshaq Jahangiri has suggested that government opponents are behind the protests, according to comments reported by state broadcaster IRIB.”

“He said: “Some incidents in the country these days are on the pretext of economic problems, but it seems there is something else behind them. They think by doing this they harm the government, but it will be others who ride the wave.”

“Earlier, Fars news agency reported that protesters in Kermanshah had destroyed some public property and were dispersed.”
“The governor-general of Tehran said that any such gatherings would be firmly dealt with by the police, who are out in force on the main roads.”

How did the demonstrations begin?

“The protests started in the north-eastern city of Mashhad – the country’s second most-populous – on Thursday.”

“People there took to the streets to express anger at the government over high prices, and vented their fury against President Hassan Rouhani. Fifty-two people were arrested for chanting “harsh slogans”.

“The protests spread to other cities on Friday, with thousands turning out in Kermanshah, Rasht, Isfahan and Qom. In Tehran, social media footage showed a heavy police presence.”

“Some developed into broader demonstrations against the authorities, calling for the release of political prisoners and an end to police beatings.”
“It was the biggest display of public dissent since huge pro-reform rallies in 2009.”

What is behind the unrest?

“The protests were initially against economic conditions and corruption but appear to have turned political.”

“Slogans have been chanted against not just Mr Rouhani but Supreme Leader Ayatollah Ali Khamenei, and clerical rule in general.”

“Demonstrators were reportedly heard yelling slogans like “The people are begging, the clerics act like God”. Protests have even been held in Qom, a holy city home to powerful clerics.”

There is also anger at Iran’s interventions abroad. In Mashhad, some chanted “not Gaza, not Lebanon, my life for Iran”, a reference to what protesters say is the administration’s focus on foreign rather than domestic issues.

“Other demonstrators chanted “leave Syria, think about us” in videos posted online. Iran is a key provider of military support to the government of Bashar al-Assad in Syria.”

“It is also accused of providing arms to Houthi rebels fighting a Saudi-led coalition in Yemen, which it denies, and is an ally of Lebanon’s powerful Shia movement Hezbollah.”

Are the protests growing?

“There have been calls on social media for protests up and down the country, despite warnings from the government against illegal gatherings.”

“Demonstrations of varying sizes are reported to have occurred in at least seven cities.”

“Overall, the numbers said to be taking part range from a less than 100 in some places to thousands in others – but demonstrations do not appear to be taking place on a massive scale.” 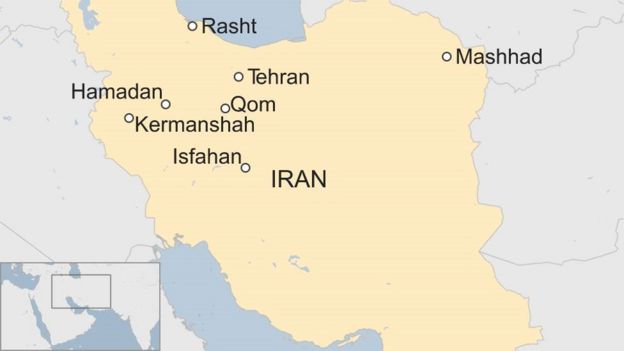