aside Sen. Feinstein Did An End Run Around Her Republican Colleagues In The Judiciary Committee

Recently, the republicans in the US Congress have been somehow privy to internal polls/ research showing that there will be a tsunami wave of wins by democrats in the upcoming November 2018 elections. So, The republicans are attempting to do everything possible to mitigate against their expected losses that are predicted post the 2018 mid-term elections

This change of fortunes favoring Democrats have republicans in the US Congress trying to figure out ways to shut down or neuter the FBI’s Trump-Russia probe and its leader, the Special Counsel Robert Mueller III. It is bad enough that they will be facing some convictions and bad press as a result of this inquiry, but then the Democrats as the majority party in US House of Representatives will be in a position to subpoena the president’s IRS tax records, order an independent commission to investigate everything and anyone involved in Russia’s meddling  in the 2016 US presidential elections. Republicans will no longer be in a position to contain any data that paints their party in an unflattering light. Also, the House will have the power to begin impeachment proceedings based on the FBI’ findings. 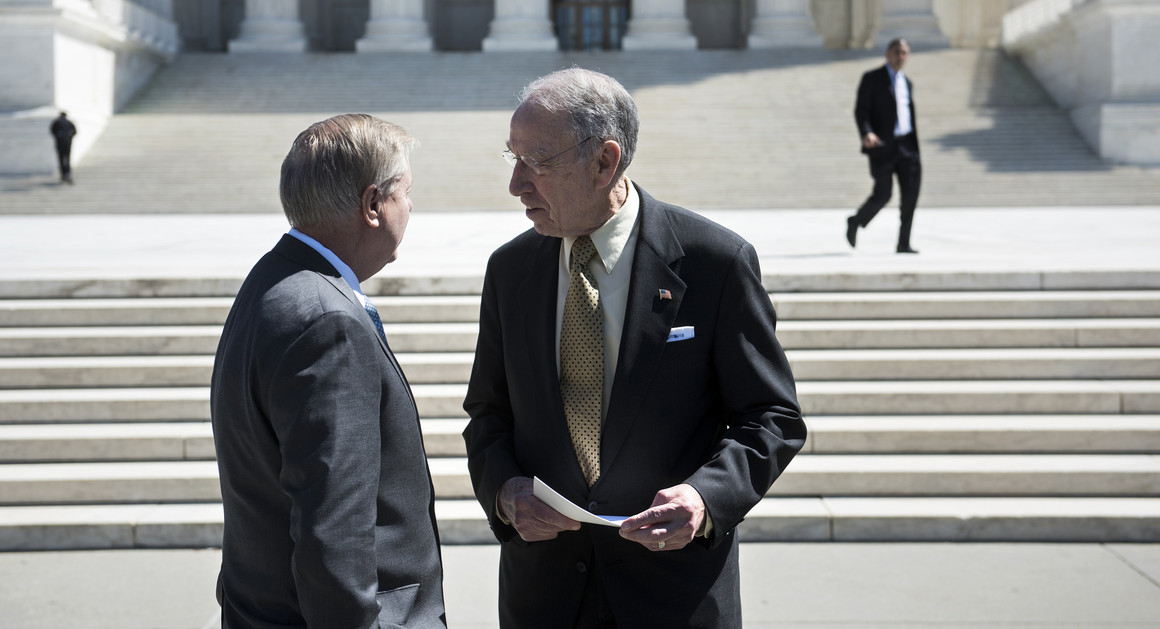 What wouldn’t republicans do to to prevent the above scenario from taking place?

This explains why I am very anxious about protecting with legislation, the lead investigator Special Counsel  Robert Mueller’s independence from being hindered/ ended without cause.

The latest republicans’ maneuver to discredit the FBI’s Trump-Russia probe has been  orchestrated by the elders of the US Senate, Senator Chuck Grassley of Iowa and Senator Lindsey Graham of South Carolina, both who are serving on the Senates’s Judiciary Committee. They acted without the knowledge of their democratic counterparts.

These two men have been blocking “we the people” from reading for ourselves, the transcript of the Fusion GPS executives 10 hours of testimony held before the US Senate’s Judiciary Committee around August 2017. The Fusion GPS personnel have asked that their testimony be made public. (See: New York Times opinion piece. /  At Town Hall Chuck Grassley is Pushed to Release Glenn Simpson 8/24/17

The Democrats on the Senate Judiciary Committee have also indicated that they want the transcript released to the public. This leaves only one reason as to why republicans have been firm in their decision to not release this transcript which is because, the information contained within it won’t confirm the republicans’ allegations.

But on January 9, the democratic co-chair Dianne Feinstein of the Senate Judiciary Committee came to the rescue as she managed to release the full transcript for public consumption. Her move came days after Sen. Grassley and Sen. Lindsey Graham (R-S.C.) referred Steele to the Justice Department for a criminal investigation. She didn’t even have to copy a page from Senator Mark Gravel who in 1971, read the Pentagon Papers into the congressional records. She just acted to do what’ right.

“The innuendo and misinformation circulating about the transcript are part of a deeply troubling effort to undermine the investigation into potential collusion and obstruction of justice,” Feinstein said in a statement. “The only way to set the record straight is to make the transcript public.”

The release of the transcript, Feinstein said, was supported by committee Democrats.”

“The move follows a decision by Republicans Chuck Grassley, who is chairman of the Senate Judiciary Committee, and Lindsey Graham to issue a criminal referral last week against Christopher Steele, the former British spy who authored the largely unverified “Trump dossier.”

Simpson (founder of Fusion GPS) touches on a wide array of topics, including Trump’s business ties, his tax history and his connection to Felix Sater, who is alleged to have links to Russian organized crime.”

Here are some highlights: