aside Fun Animal Stories About Placements Of Ornery Cats And Bear Cubs On The Loose.

NOTE: This animal tall tales blog is my way of taking a break from political news.

Both animal stories were published by the Associated Press (AP). In one telling, an animal shelter found a way to place difficult cats who were not enamored with human beings into settings where they were useful. The other tale involves 2 bear cubs who decide to leave home base to embark on an adventure.

As per a PHILADELPHIA (AP) published report, “For Ornery Shelter Cats, 2nd Chance Is A Job Chasing Mice,  “Gary wasn’t used to being around people. He didn’t like being touched or even looked at. If anyone came too close, he’d lash out.”

“He was perfect for the job. Because at the Working Cats program, no manners is no problem.”

“Philadelphia’s Animal Care and Control Team established the program about 4 years ago to place unadoptable cats — the biters and the skittish, the swatters and the ones that won’t use a litter box — into jobs as mousers at barns or stables.”

“The shelter recently expanded the program to move cats that were less-than-ideal pets into urban jobs at places like factories and warehouses as a sort of green pest control. The animals are micro-chipped, vaccinated and free of charge.”

“Part of the reason cats became domesticated was to get rid of the rodent population,” said Ame Dorminy, ACCT’s spokeswoman. “We took advantage of their natural propensity to hunt and made an official program out of it.”

“Cats identified as good matches for the program are kept in a separate aisle at the shelter in a row called TTA, time to adjust. On a recent visit, a low growl could be heard from a cage housing a male named Spike, whose intake sheet listed his qualifications: hissing, swatting, spitting, can’t be picked up. A few doors down, Prince was standoffish at the rear of his cage.”

“Just because cats don’t want to be petted or snuggle on a lap doesn’t mean they can’t have good lives, Dorminy said.”

“A lot of these cats feel more comfortable when they can be themselves and use natural behaviors,” she said. “Then they’re more open to human interaction because they feel more confident.”

“At Bella Vista Beer Distributors, mice were gnawing on bags of chips overnight, leaving a mess and forcing staffers to throw out about 15 bags a day, owner Jordan Fetfatzes said.”

“They tried exterminators, but nothing worked. An employee found ACCT’s program online, and Fetfatzes eventually decided on Gary, a white male with one blue eye and one green that had “behavioral issues.” Gary wasn’t accustomed to people and would hiss from the crate. At first, Gary would stay in the office and would only go into the warehouse after hours.”

“As the weeks passed, he warmed up to workers and customers, and has transformed into a sweet, playful mascot with free rein of the store.”

“My only complaint is sometimes he gets in the way of a transaction,” said Fetfatzes, who’s turned in to a cat lover thanks to Gary.”

As per a RAPID CITY, S.D. (AP) report, “Curiosity Does In Bear Cubs After Escape From Wildlife Refuge,”— “Two bear cubs that escaped from a South Dakota wildlife park didn’t get far, due in part to their curiosity.”

“The Rapid City Journal reports that a man spotted the cubs lollygagging in his neighbor’s yard about a block away from the Bear Country USA park on Sunday evening.”

“Pennington County Sheriff’s Deputy Kylie Kintigh says that when she arrived at the scene, the bears seemed more interested in following her around than making a getaway. They checked out her squad car and one even tried climbing on the hood.” 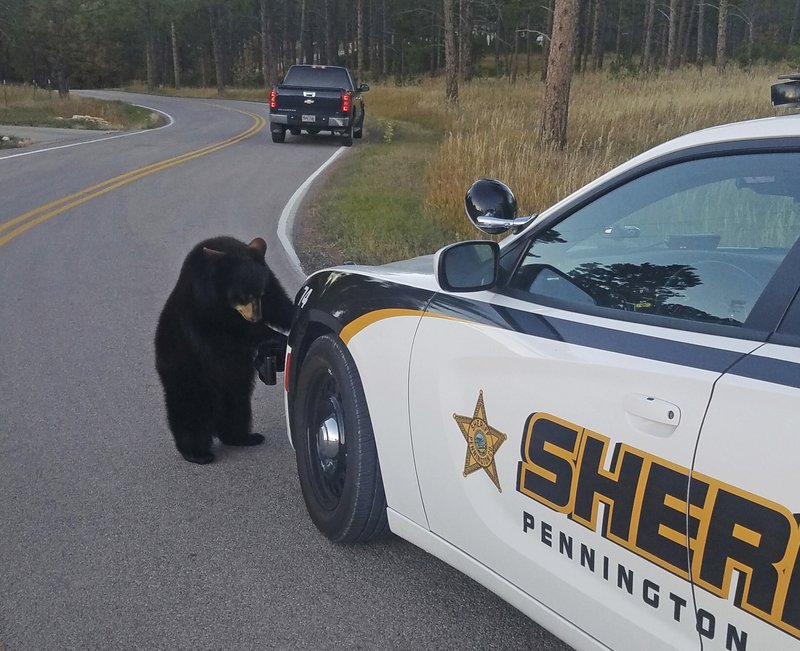 This Sunday, Oct. 15, 2017 photo provided by the Pennington County Sheriff’s Office shows one of two bear cubs that escaped from a South Dakota wildlife park investigating Deputy Kylie Kintigh’s patrol car in Rapid City, S.D. A man spotted the cubs lollygagging in his neighbor’s yard about a block away from the Bear Country USA park. When Deputy Kintigh arrived, the bears seemed more interested in following her around than making a getaway. Park workers eventually arrived to return them to the park. (Kylie Kintigh/Pennington County Sheriff’s Office via AP)

“Park workers eventually arrived and gently sedated the cubs for their return to the park. It’s unclear how / when they escaped.”

“Kintigh says “It definitely was the best call I have had — and that might stand true to the end of my career.”