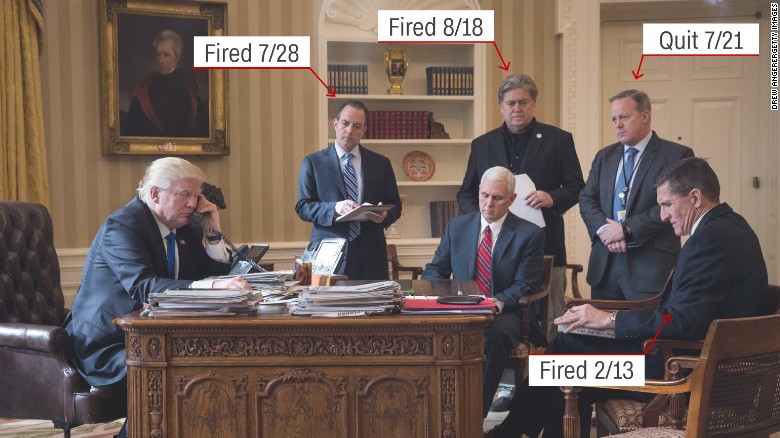 The high turnover rate within the republican President Donald Trump’s White House is a reflection of the dysfunction within. The recently announced  imminent departure of the White House staff secretary of one year without FBI clearance Rob Porter, and after published allegations of abuse from his 2 ex-wives against him, fuels this focus on the chaotic internal workings in the president’s administration.

This reality TV show White House atmosphere is not helped by the former staffer,  Omarosa Manigault Newman’s appearance on tonight’s (2/8/18)  episode of “Celebrity Big Brother,” where she will be opening up to another contestant about her time at 1600 Pennsylvania Ave. — and presents a not-all-flattering portrait of the president she served.

“I was haunted by tweets every single day, like what is he going to tweet next?” Manigault Newman tells television personality Ross Matthews in a clip teased on social media by the official account of the long-running CBS reality show.”

“President Donald Trump’s first year in office has seen a record number of staff turnover, with 34 percent of the administration resigning, being reassigned or being fired.”

“The high level of staff turnover, detailed in a Wall Street Journal report (2/8/18), is unprecedented in the last 40 years, and is especially unusual given the seniority of the staffers who have left the White House.”

“Administration turnover rate in the past year has been tracked by Kathryn Dunn Tenpas, a senior fellow at the Brookings Institution who has tracked White House turnover for more than 3 decades. Her analysis shows that 21 of the 61 officials she’s tracked have left the administration or been reassigned, a much higher rate than years prior.”

“That’s unprecedented. The first year always seems to have some missteps on staffing, often because the skills that worked well running a campaign don’t always align with what it takes to run a government,” Tenpas told the Journal. “In this case, it’s a president with no experience in government and people around him who also had no experience,” she continued. “So it’s not surprising that it’s higher than normal, but it’s still surprising it’s this high.”

The next-highest administration turnover rate was when Ronald Reagan was in the White House. In 1981, 17 percent of senior aides left Reagan’s administration.”

“Not only is the percentage double, the seniority of people leaving is extraordinarily high,” said Tenpas of the Trump administration compared to Reagan’s.

“Barack Obama’s turnover rate during his first year in office was 9 percent, and Bill Clinton’s was 11 percent.”

“Trump’s first year has been marked by several dramatic departures, like Reince Priebus, who resigned in July after the shortest tenure as White House Chief of Staff in history, and Anthony Scaramucci, who went down in flames just 10 days after he was sworn in.”

“Former national security adviser Michael Flynn, former chief strategist Steve Bannon and former press secretary Sean Spicer all departed from the administration in the first year as well, and have remained in the public eye since.”

TURNOVER AS OF AUGUST 2017On December 15, 2017, Jeff Shesol of the New Yorker penned the following report, “A Year Into the Trump Era, White House Staff Turnover Is “Off the Charts”

“Staff departures have been a constant of Donald Trump’s first year in the White House. Michael Flynn has put in a guilty plea. Steve Bannon, Reince Priebus, and Anthony Scaramucci were pushed out. Sean Spicer is off working on a book. Omarosa Manigault, the former contestant on “The Apprentice” whom Trump installed in the Office of Public Liaison, was reportedly fired, on Tuesday. In September, Politico reported that “a fast-growing number of White House staffers” were updating their résumés, making lunch dates with headhunters and prospective employers, and counting the days until 2018. “There will be an exodus from this administration in January,” one Republican lobbyist told Politico. It has already been confirmed that Dina Powell, the deputy national-security adviser, will leave the White House early next year, and that Paul Winfree, the deputy director of the White House Domestic Policy Council and the director of budget policy, will head back to his old job at the Heritage Foundation after this week.”

“This degree of churn is “off the charts,” according to Kathryn Dunn Tenpas, a non-resident senior fellow at the Brookings Institution, who has spent years tracking White House turnover rates. Next month, Tenpas will release her findings about Trump’s first year in office. The data—some of which she shared with me this week—is striking: even if every one of Trump’s senior aides stays put until January 20th, the anniversary of his Inauguration, his first-year turnover rate among senior staff—some sixty positions in total—will reach or exceed thirty-three per cent. Turnover, as Tenpas defines it, includes resignations, firings, and shifts of position within the White House. Trump’s first-year turnover rate will be three times higher than both Barack Obama’s (nine per cent) and Bill Clinton’s (eleven per cent) and double Ronald Reagan’s (seventeen per cent), which is as far back as Tenpas’s analysis goes. And this, almost certainly, is just the beginning. Every one of the past five Presidencies saw a massive jump in departures during its second year: typically, the rate more than doubles as staff burnout intensifies, legislative initiatives bog down in Congress, and midterm elections, almost inevitably, deal a setback to the President’s party.”

“Turnover isn’t necessarily a bad thing. Trump traded up when he hired John Kelly to replace the ineffectual Priebus as chief of staff and H. R. McMaster to succeed Flynn at the helm of the National Security Council.”

“Replacing senior aides is never easy; finding men and women with the right mix of qualifications and connections, and who have personal chemistry with the President, is a challenge for any White House. But for Trump’s it is likely to be even harder. If Republican leaders in Congress succeed in getting their tax bill over the finish line this month, it will be Trump’s first legislative achievement of note as President; much of the rest of his agenda has been stalled. His political standing on Capitol Hill took another hit this week when Doug Jones, a Democrat, defeated the Trump-endorsed Republican Roy Moore in the special Senate election in Alabama. And the special counsel’s investigation into links between Trump’s Presidential campaign and the Russian government continues to loom over everything that Trump and his team might try to accomplish. New recruits are “not jumping onto a bandwagon,” Tenpas told me. “They’re jumping onto something that’s chugging up a hill.”

The compounding trouble for Trump is that he needs his staff even more than any other modern President has. Trump entered office with no government experience, and, a year into his term, he seems just as ignorant and incurious as ever—just as hungry for all the made-up nonsense he can consume, despite the efforts of staff members like Kelly to regulate his diet of misinformation. For all their obvious failings, Trump’s senior advisers remain, in government parlance, “essential personnel.” Yet he will, almost certainly, continue to drive many of them to distraction—and, ultimately, drive them out. As Bradley H. Patterson, Jr.—who served under Dwight Eisenhower, Richard Nixon, and Gerald Ford—has written, “A White House is organized, and behaves, exactly as the president prescribes it.”