This is beyond malfeasance. The US Congress is poised to pass a 2018 budget bill which would be good for 2 years but which would add 400 billion in new spending and suspend the debt ceiling until 2019, and this is soon after Republicans passed a 2017 tax cuts bill that would add a minimum of more than $1 trillion to the debt over a decade. Credible tax analysts place the decade deficit increase between $1.4- $1.7 trillion dollars.

The GOP 2017 trickle down economics tax cuts bill was enacted at a time when the US economy was experiencing record soaring stock market increases, almost full employment, corporations making record profits while sitting on tons of cash.

The republicans, the supposed deficit hawks did this reckless spending with monies that we could ill afford without a second thought. What happens if the rosy deficit forecasts from this tax bill prove to be inaccurate, and the economy does not grow as fast as Republican leaders are saying it will (over 3%-4%), then what do they think is going to happen to the economy. Where are the brakes? (See: United States GDP Growth Rate – Forecast – Trading Economics) 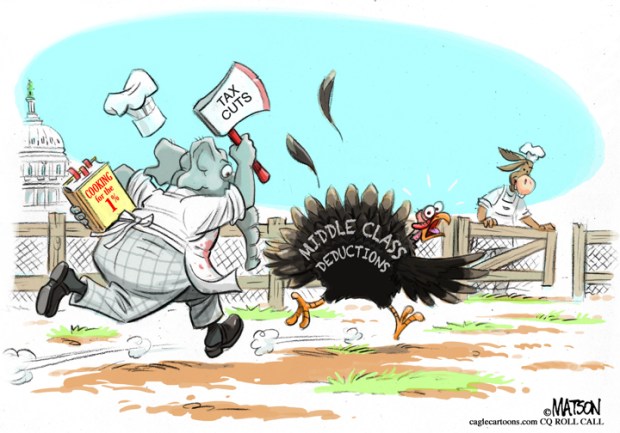 As per a 12/21/17, WSJ report, “The House is expected to pass a short-term spending bill Thursday afternoon that includes a provision needed to avoid $25 billion in Medicare cuts triggered by the GOP tax bill under pay-as-you-go budget rules.”

That law (PAYGO rule) requires tax cuts and certain spending increases to be paired with offsetting provisions. If not, the law forces automatic spending cuts, although Congress has routinely passed the waiver in years past.

During the tax bill debate, GOP leaders made explicit promises to Sen. Susan Collins (R., Maine) that the provision waiving the pay-as-you-go, or pay-go, rule, would be included in year-end legislation.

The republicans would like everyone to believe that the only real solution to solve the problem of increasing US deficits over the next decade is to confront dealing with entitlement spending. This is the big lie. This existing problem starts with a poorly crafted 2017 GOP tax cuts bill with lots of give-aways to the very rich which we could ill afford.

On February 7, 2018, Damian Paletta and Erica Werner of the Washington Post penned the following report,  “Republicans are completely reversing themselves on the deficit”

“Republican lawmakers in 2011 brought the U.S. government to the brink of default, refused to raise the debt ceiling, demanded huge spending cuts, and insisted on a constitutional amendment to balance the budget.”

“On Wednesday (2/7/18), they formally broke free from those fiscal principles and announced a plan that would add $500 billion in new spending over two years and suspend the debt ceiling until 2019. This came several months after Republicans passed a tax law that would add more than $1 trillion to the debt over a decade.”

“With all these changes, the annual gap between spending and revenue in 2019 is projected to eclipse $1.1 trillion, up from $439 billion in 2015. And they are expanding the deficit at an unusual time, when the economy is growing and unemployment is low, a dynamic that often leads to shrinking budget gaps.”

“I don’t think there’s any question but that there’s a bury-your-head-in-the-sand view of the deficit and the debt issues relative to this Congress and this administration,” said former senator Judd Gregg (R-N.H.), who once led the Senate Budget Committee.”

“The debt binge caps off a major reversal for the Republican Party, which has been swept up by President Trump’s demands for more spending and tax cuts at a time when the public seems to care less about debt than it has in years.”

“In 2011, Rep. Paul D. Ryan (R-Wis.), then chairman of the House Budget Committee, proposed a budget-slashing plan that would lead to a $415 billion deficit in 2019. Ryan is now speaker of the House, and the tax and spending plan he is helping advance through Congress would put the deficit at almost three times the amount he envisioned in 2011.”

“A number of House conservatives on Wednesday said they were mortified about the new spending agreement, but there appears to be little they can do to stop it. The deal was cut between House and Senate leaders from both parties, with the White House’s support.”

“It’s the wrong thing to do because it’s not consistent with what we told the American people we were going to do, and what they elected us to do,” said Rep. Jim Jordan (R-Ohio). “We’re going to run a trillion-dollar deficit.”

“AshLee Strong, a spokeswoman for Ryan, said that it is spending on other programs, such as Medicare and Medicaid, that drive “our long-term debt problem.”

“She said spending on programs like these will “continue to be the problem that [Ryan] hopes Washington will finally address.”

“But changes to those programs aren’t expected this year. All this new borrowing costs money, and rising interest rates make the widening deficit even more expensive.”

“The Congressional Budget Office projected last year that annual interest payments on the debt would grow from $307 billion in 2018 to $818 billion in 2027. Interest rates are projected to rise at least one full percentage point over the next 18 months, and Gregg said that could push up borrowing costs by $1.6 trillion over 10 years.” (When bonds are issued at rates close to 3%, many who would normally purchase stocks will revert to buying bonds.) “Trump promised to try to tackle the deficit once in office, but he has rejected efforts by advisers to pursue changes to Medicare and Social Security that would cut spending. Medicare and Social Security account for $1.6 trillion of the $4.1 trillion in spending this year. And Trump signaled several weeks ago that he would likely not push for cuts in welfare spending if Democrats wouldn’t go along.”

“White House officials have dismissed concerns about the deficit, saying some near-term moves are necessary to speed up economic growth. But their growth projections often don’t match the expectations of budget experts and economists, which means that much of the revenue they have promised might not materialize.”

“The biggest budget hawks used to be in the House, but many have softened their demands since Trump took office.”

“White House budget director Mick Mulvaney was a South Carolina GOP lawmaker during many of President Barack Obama’s budget showdowns with Congress, but since joining the Trump administration he has taken a different approach. He said last year that he had to work with Congress to seek a consensus on spending bills and that lawmakers weren’t interested in pursuing legislation that would cut spending.”

“The White House plans to put out its 2019 budget proposal on Monday, and it will likely call for steep reductions in spending levels on domestic programs. But Wednesday’s spending agreement is a signal from Congress that it will cast most of the White House’s ideas to the side.” 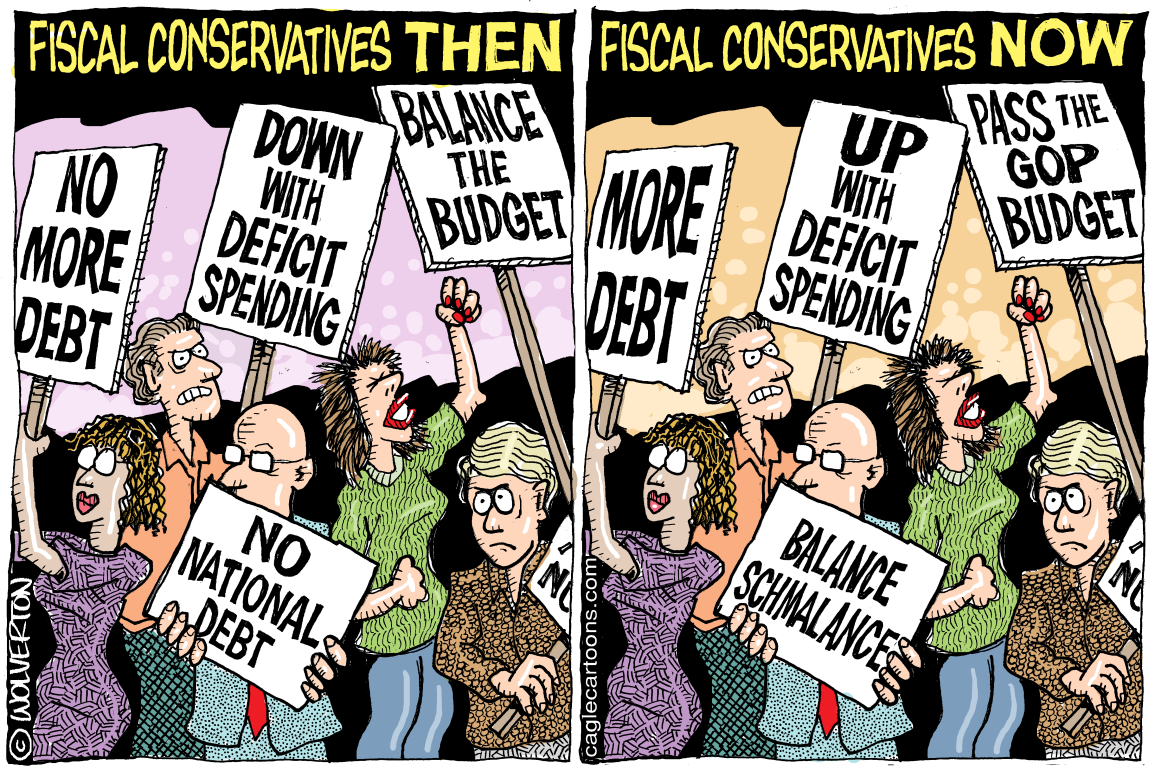 “The Senate isn’t even planning to approve a budget resolution this year, making it even harder for it to curb spending.”

And Trump has said he wants Congress to enact a $1.5 trillion infrastructure plan. White House officials envision that $200 billion of this money would come from federal spending and the rest would come from cities, states and other resources. Still, they haven’t specified where the $200 billion would come from or whether it would lead to even more debt.

“There are growing signs that Washington and Wall Street are only now coming to grips with the GOP embrace of higher debt levels. The Treasury Department said last week that it planned to issue $955 billion in new debt this year, an 84 percent increase from 2017, to account for its “fiscal outlook.”

“The CBO has warned that the tax-cut law would lead to a $10 billion or $15 billion monthly drop in revenue from individuals and families starting in February compared with what it was projecting last year.”

“The stock market has careened down and then back up in the past two weeks in part because of concerns that inflation would drive up interest rates, slowing the economy and pushing borrowing costs even higher.”

“Another reason the White House and Congress have ignored past pledges on the deficit is that the mood of the country seems to have changed, according to Pew Research polling. In 2018, 48 percent of Americans said the budget deficit should be a top priority for the president and Congress, down from 63 percent in 2014. A year before that, 72 percent said the budget deficit was a priority, as high as it had been in the past two decades.”

“A number of Republicans have said they are only agreeing to the new spending bill because they had to allow Democrats to raise spending on domestic programs in order to extract more money for the military.” 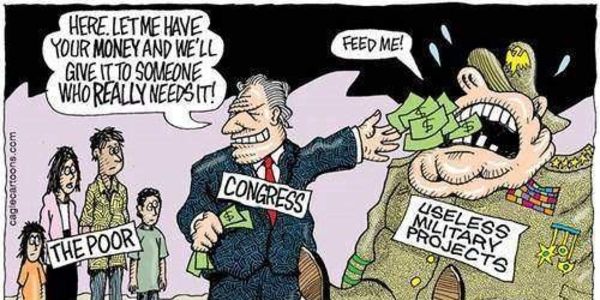 “The deficit, as a share of gross domestic product, hit a recent peak of 9.8 percent in 2009 and then steadily contracted, shrinking to 2.4 percent in 2015. The deficit was $666 billion last year, or roughly 3 percent of GDP.”

“Budget experts say restraining spending will only get harder for lawmakers as an aging population will put more pressure on programs such as Medicare and Social Security and rising debt levels and interest rates will push costs even higher.”