aside Dear General Kelly, You Must Be So Proud of The DHS You Created

The current republican President Donald J. Trump Chief of Staff General John Kelly as the former head of the US Department Homeland Security is responsible for the hard-lined actions described below by Ice agents. His hand-picked replacement who emulates his thinking is Secretary Kirstjen Nielsen.

He and his replacement have sat there before US congress representatives and lied to them, insuring them that non-criminals were not priorities for deportation. Now, knowing to the degree that General Kelly has slowly revealed his true nature over time for being racist and an anti-immigration hard-liner, I cringe at the thought of this man having ever been the head of DHS, only to be be replaced by one who represents his views, Secretary Kirstjen Nielsen.

On February 10, 2018, Nicholas Kristof of the New York Times penned the following report,  “President Trump, How Is This Man a Danger?”

“President Trump suggests that the aim of his crackdown on immigrants is to “defend Americans” from “savage,” “worst of the worst” intruders who kill Americans or at least are “dangerous criminals.”

“What does Trump’s crackdown look like in real life? In Lawrence, Kan., the other day, immigration agents handcuffed a beloved chemistry professor as he was leaving his home to drive his daughter to school. Then they warned his crying wife and children, ages 7 to 14, that they could be arrested if they tried to hug him goodbye, and drove off with him — leaving a shattered family behind.”

“I’m a normal 12-year-old with a dad like everybody else’s dad,” the daughter he was about to drive that morning, Naheen Jamal, told me. “I don’t understand why this is happening.”

“Her dad, A. Jamal, 55, had been in America for 30 years, having arrived legally from Bangladesh as a student, before overstaying his visa. He loved Kansas and settled in Lawrence, teaching at local colleges and volunteering at local schools — even running for the school board. He coached students in science and sports.”

“But President Trump, you say that these people are “criminals, drug dealers, rapists” and that we must be protected from them.”

“Jamal, who seems just about the least dangerous person in America, is now in jail pending deportation to Bangladesh. A court intervened with a temporary stay as the government was trying to rush him out of the country.”

“While this arrest has done nothing to make anyone safer, it is devastating for three American citizens in particular — his children. Their mom, Angela, also of Bangladeshi origin, donated a kidney last year, and Jamal is the only source of family income.”

“If Jamal is indeed deported, his family will be upended. Randy Capps of the Migration Policy Institute estimates that 25,000 people deported in 2016 have children who are American citizens.”

“Researchers have found that such children often bounce around among relatives.”

“It’s insane,” said Marci Leuschen, a high school biology teacher and friend of the Jamal family who has helped organize a campaign in Lawrence to support the family. Some 500 people showed up at a local church to write letters in support of Jamal, and Leuschen said some were Trump supporters who were aghast that the immigration crackdown meant locking up their friend.”

On Change.org, more than 66,000 have signed a petition calling for Jamal to be freed. A GoFundMe campaign has raised more than $39,000 for legal and other expenses. 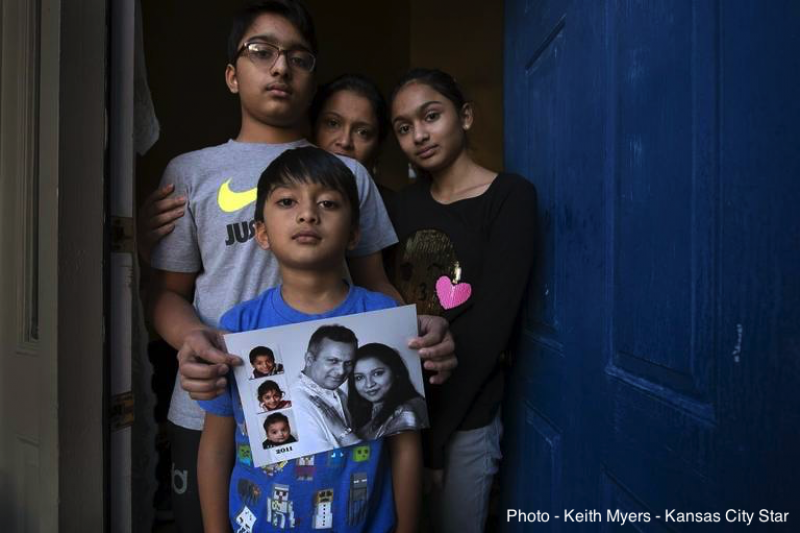 “Thank you, President Trump, for defending us from such “bad hombres” — even if Professor Jamal hasn’t been accused of any violence, in contrast to your (recently ousted) staff secretary.”

“Naheen said that the outpouring of community support has overwhelmed her. “It’s what keeps me going,” she told me. “Everyone in my community, I feel so grateful to them.”

“Jamal earned a graduate degree in pharmaceutical sciences, worked as a researcher in cancer and genetics and became renowned for helping others. He even assisted elderly neighbors with their weekly shopping and checked on their medicines.”

“The truth is, the country needs more neighbors like Syed,” wrote a local pastor, Eleanor McCormick, whose Plymouth Congregational Church in Lawrence has helped lead the grass-roots effort to support him.”

“Jamal has had a tortuous series of interactions with the impossibly complex immigration system. Several years ago, immigration authorities ruled that he had overstayed his visa, but the Obama administration exercised discretion, and (like countless others) he was allowed to stay if he reported in regularly. So Jamal had a temporary work permit and checked in with the immigration authorities, most recently on Jan. 7. Everything seemed to be fine — until the immigration officers decided for some reason to blow up his family’s life.”

“Thank you, Mr. President, for shielding us from the “worst of the worst” chemistry professors.”

“Carl Rusnok, a spokesman for Immigration and Customs Enforcement, did not try to argue that Jamal is a threat. He said that the priority is to arrest criminals (as it was under Barack Obama) but that no one’s excluded.”

“The American immigration system is a mess, and I don’t pretend there are easy solutions. But I don’t think we should lightly deport people who may have violated immigration rules but pose no threat and are embedded in American society — people like, well, Melania Trump, who worked without authorization on her visitor visa when she first came to the U.S., according to an investigation by The Associated Press.

I do believe it’s important to hold individuals to account for misconduct. So I tried to ask Homeland Security Secretary Kirstjen Nielsen why she is determined to destroy the lives of the Americans in the Jamal family. She did not respond,, perhaps because she was too busy being a good citizen helping elderly neighbors with their groceries. Or maybe just deporting “savage” immigrants to protect Americans.”