The USA is the land of easy gun access. “We the people” of the USA have been dealing with this for years. I better not hear from a republican candidate who will spout the words after any mass shooting tragedy that this is not the right time to talk about gun control because people need to grieve. We have been held hostage by the NRA (National Rifle Association) which owns the republicans in the US Congress to where not even the most reasonable of gun control measures can be considered for legislation. Yet, we have more to fear from these home grown mass shooters (terrorist events) than we have from the republicans’ bogeyman,  foreign terrorists. But in the USA, any individual on a terror list can still purchase a gun.

In the USA, there has already been 12 cases of mass shootings already in 2018. In Florida any 18 year old can legally purchase whatever guns and rifles they want, and it is a Parkland Florida High School that has been the latest target of a mass shooter.  it is being reported that the shooter is in custody, that there are at least 17 fatalities and multiple injuries. The Marjory Stoneman Dougas High School of 3000 + students was close to the end of a school day when the kids heard the second  fire drill of the day, only this second one was set off by the mass shooter.

As per a 2/14/18 Miami Herald report, the suspect is a 19 year old ex-student Nikolas Cruz who had been previously expelled.  “The former student suspected of opening fire at Marjory Stoneman Douglas High School in Parkland may have been identified as a potential threat to fellow students in the past, according to one teacher.

“Nikolas Cruz, was detained by police, briefly taken to a hospital and brought to the Broward Sheriff’s headquarters.

“We were told last year that he wasn’t allowed on campus with a backpack on him,” said math teacher Jim Gard, who said Cruz had been in his class last year. “There were problems with him last year threatening students, and I guess he was asked to leave campus.” 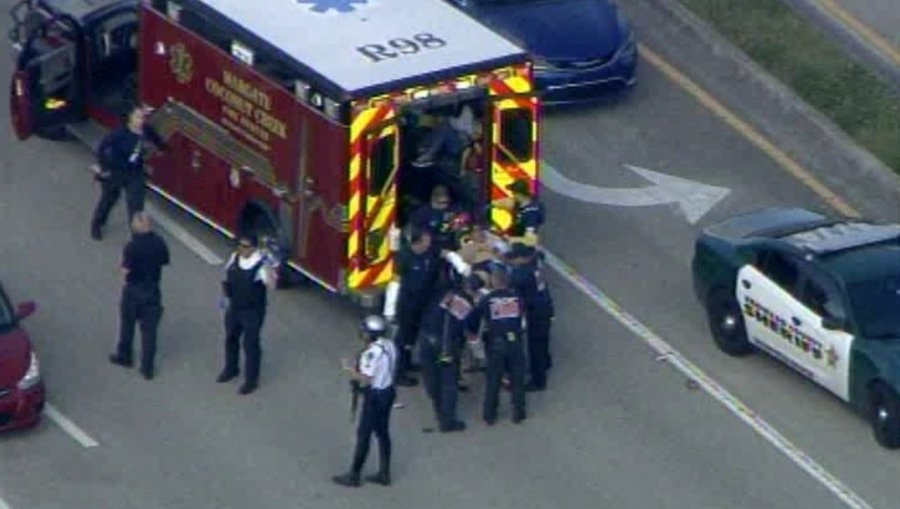 “However, Victoria Olvera, a 17-year-old junior, said Cruz was expelled last school year after a fight with his ex-girlfriend’s new boyfriend. She said Cruz had been abusive to his girlfriend.”

“School officials said Cruz was attending another school in Broward County after his expulsion.”

Cruz’s mother Lynda Cruz died of pneumonia on Nov. 1 neighbors, friends and family members said, according to the Sun Sentinel. Cruz and her husband, who died of a heart attack several years ago, adopted Nikolas and his biological brother, Zachary, after the couple moved from Long Island in New York to Broward County. 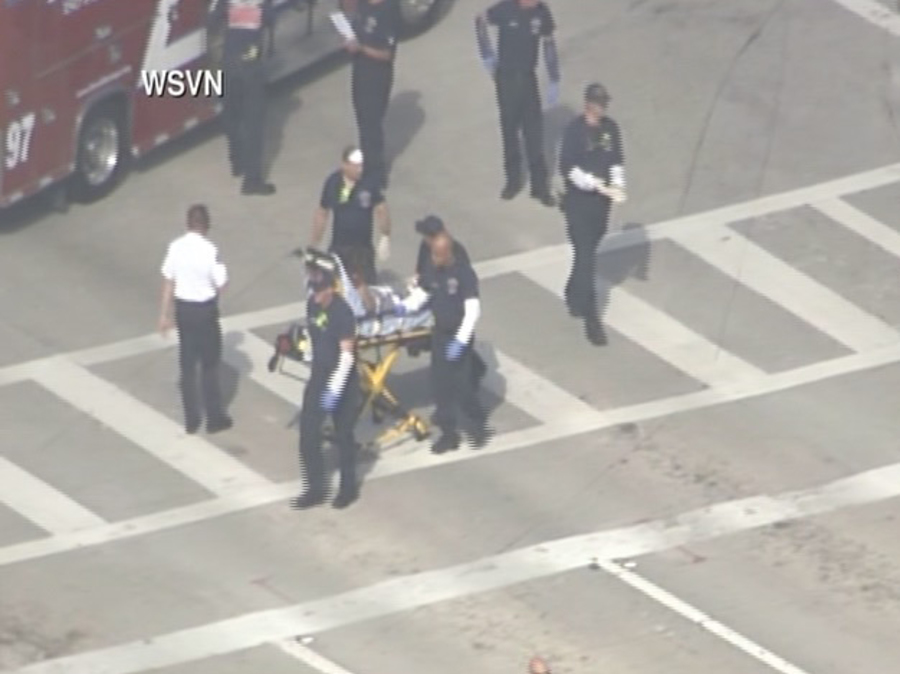 “The boys were left in the care of a family friend after their mother died, family member Barbara Kumbatovich, of Long Island, said.”

“Unhappy there, Nikolas Cruz asked to move in with a friend’s family in northwest Broward. The family agreed and Cruz moved in around Thanksgiving. According to the family’s lawyer, who did not identify them, they knew that Cruz owned the AR-15 but made him keep it locked up in a cabinet. He did have the key, however.”

“Jim Lewis said the family is devastated and didn’t see this coming. They are cooperating with authorities, he said.” 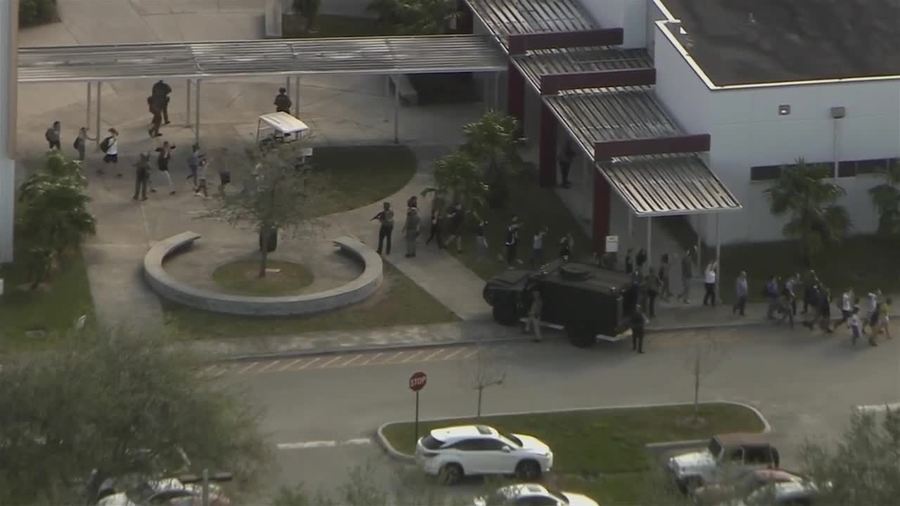 “Broward County Mayor Beam Furr said during an interview with CNN that the shooter was getting treatment at a mental health clinic for a while, but that he hadn’t been back to the clinic for more than a year.”

“It wasn’t like there wasn’t concern for him,” Furr said.”

“We try to keep our eyes out on those kids who aren’t connected … Most teachers try to steer them toward some kind of connections. … In this case, we didn’t find a way to connect with this kid,” Furr said.”

“And some of the things that have come to mind are very, very disturbing,” he added without elaborating.”

“A suspect was taken into custody after a mass shooting at Marjory Stoneman Douglas High School in Parkland, Fla. (Reuters)”

“Multiple fatalities are reported after gunfire erupted Wednesday afternoon at a South Florida high school, sending police on a lengthy manhunt while students and teachers remained barricaded inside.” 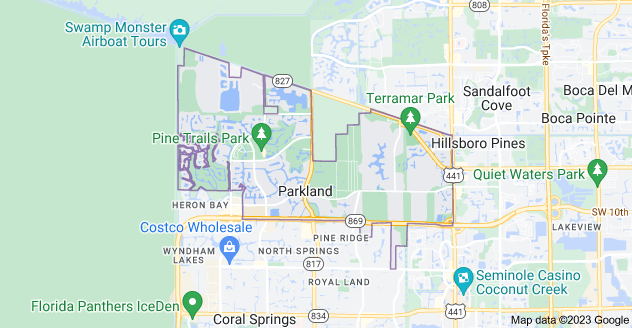 “The shooting happened shortly before classes were dismissed at Marjory Stoneman Douglas High School in Parkland, northwest of Fort Lauderdale.”

“Police have taken the person suspected of opening fire at the school into custody, the Broward Sheriff’s Office said.”

“Robert W. Runcie, the superintendent of Broward County schools, told reporters at the scene that there are “numerous fatalities.”

“It is a day you pray every day you don’t have to see,” Runcie said.”

“He said officials were not aware of threats made before the incident.”

Shooter is now in custody. Scene is still active. #stonemanshooting

“Earlier in the day, Dan Booker, a fire chief from a nearby city, had said that the number of injured could stretch much higher, estimating 20 to 50 victims. Some of those injured are students who were shot, Booker said.”

“Booker said he was seeking aid from the Coast Guard and other agencies because many victims will need to be transported by helicopter.”

“Video from the scene showed police surrounding the building and students being quickly marched away from Stoneman Douglas High. News cameras also captured people being wheeled out on stretchers, though their conditions were not immediately clear. A tweet from the school’s parent district, Broward County Public Schools, said, “We are receiving word of multiple injuries.” 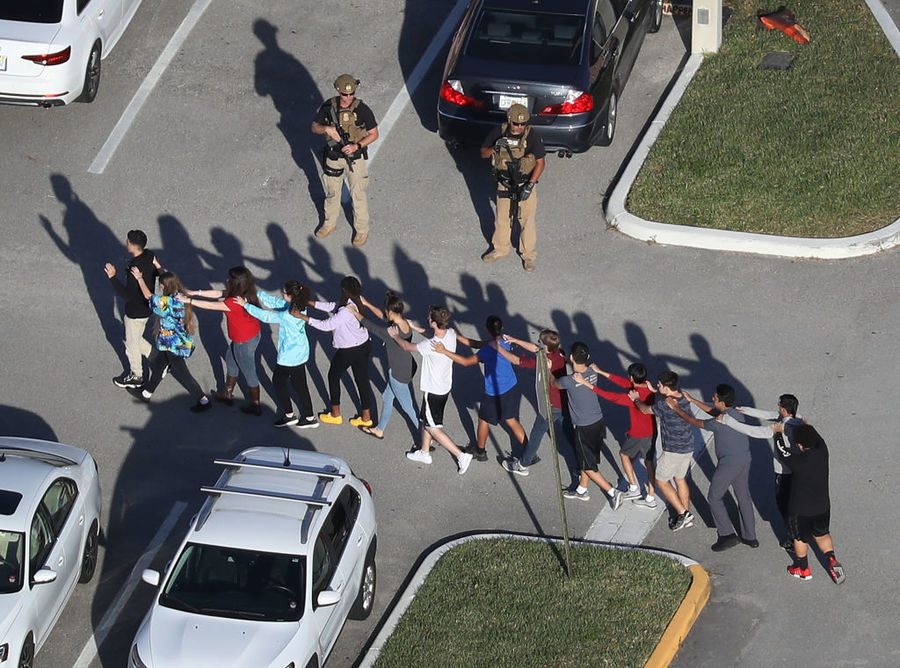 “Police from nearby Coral Springs, who were also responding to the incident, urged students and teachers to remain barricaded inside the school. Law enforcement officials said they were clearing students building by building.”

Police are working an active shooter scene, and ask that if you are in touch with your student you ask that they remain calm and barricaded until police come to their room, this is for everyone’s safety. Do NOT call our 911 or non-emergency number unless it is an emergency.

Twitter Ads
“Gov. Rick Scott (R) said he had been briefed by the Broward County sheriff, whose agency was leading the response, as well as by the county’s school superintendent. President Trump was notified of the shooting, Deputy Press Secretary Lindsay Walters said.”
“The president has been made aware of the school shooting in Florida. We are monitoring the situation. Our thoughts and prayers are with those affected,” Walters said.”

My prayers and condolences to the families of the victims of the terrible Florida shooting. No child, teacher or anyone else should ever feel unsafe in an American school.

Just spoke to Governor Rick Scott. We are working closely with law enforcement on the terrible Florida school shooting.

Today, close to Marjory Stoneman Douglas High School’s dismissal, students, staff heard what sounded like gunfire. The school immediately went on lockdown but is now dismissing students. We are receiving reports of possible multiple injuries. Law enforcement is on site.