aside When Russians Published Exposé About Internet Research Agency In 2017, It Was A Local Dud 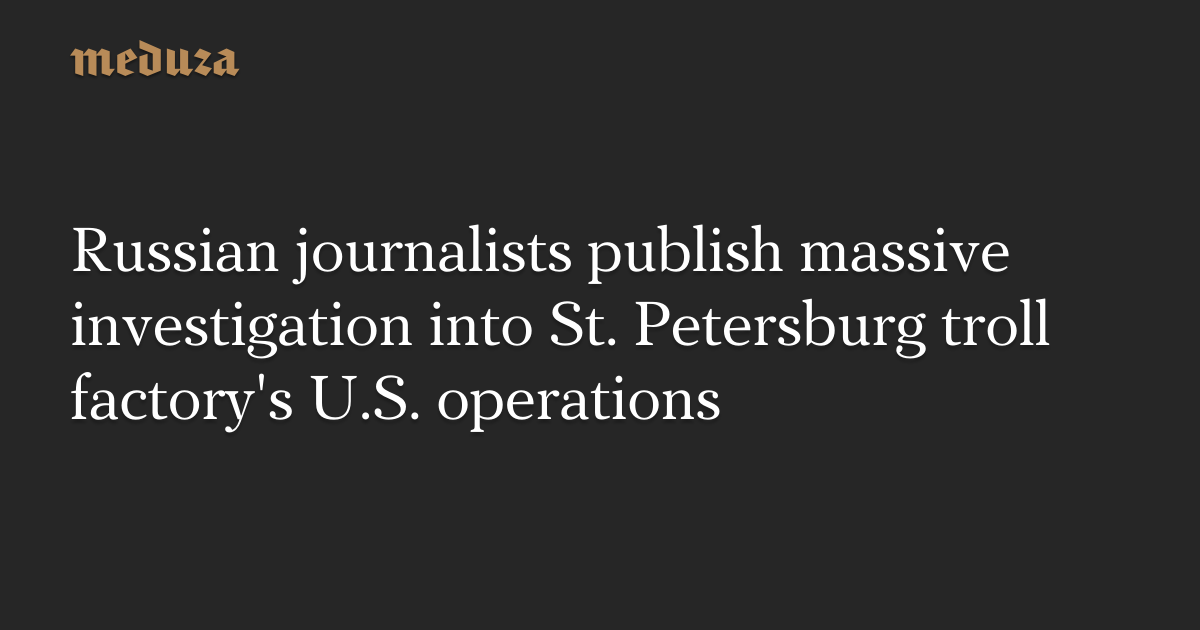 Can you believe that some of  the information contained within the 2/16/18 FBI’s 37-page indictment about some of the actions taken by Russians to interfere in 2016 US elections including details about Russia’s troll factory, was old news in Russia? The Russian journalists Polina Rusyaeva and Andrey Zakharov of a Russian business magazine RBC, had already published an exposé about this Internet Research Agency which was one of the Russian entities included in the FBI’s indictments.

As per the 2/18/18 Daily Beast by Anna Nemtsove, “In the summer of 2015, The New York Times Magazine published an extensive report on the Internet Research Agency’s dirty tricks in the United States, including a social media campaign to spread panic in Texas about a nonexistent terror attack. Russian opposition leader Aleksei Navalny put out his video investigation of Russian trolls in August 2015. And just last October RBC magazine  published a 5,000 word report on the Troll Factory that laid out in considerable detail how it tried to influence the U.S. race for the presidency with a budget of $2.2 million and 100 people (not 13).”

“Savchuk and the information she had gathered at the Internet Research Agency figured in several reports. She published her articles in Novaya Gazeta and other independent newspapers, and she said she would be happy to talk to Mueller’s investigators, but, so far, he hasn’t been in touch.”

“It was just about three years ago that Savchuk, an investigative journalist, volunteered to become a mole at the Factory. Her Internet World team watched it from outside, taking photos and videos of hundreds of employees walking out of the four-story building every day at 9 p.m., while a new shift crowded by the entrance, ready to walk inside and sit shoulder to shoulder at their tightly lined-up desks, composing posts on fake accounts until 6 in the morning.”

“The Factory, at that time, was operating from a building in the suburbs of Saint Petersburg at 55 Savushkina Ave., but earlier this month it moved into a seven-story business center with multiple exits. So now it is harder for the observers to count and identify the Factory’s employees. ” 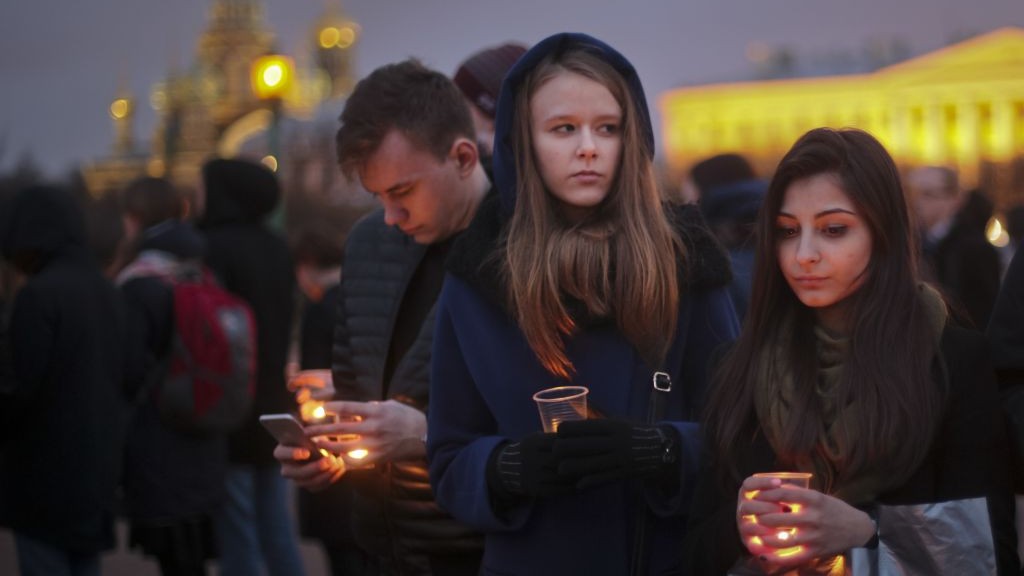 On February 18, 2018, Adam Taylor of the Washington Post penned the following report, “The Russian journalist who helped uncover election interference is confounded by the Mueller indictments”

“A 37-page indictment issued by special counsel Robert S. Mueller III’s team on Friday brings fresh American attention to one of the strangest elements of alleged Russian interference in the 2016 election: The Internet Research Agency (IRA), a state-sponsored “troll factory” in St. Petersburg.”

But much of the information Mueller published on February 16, 2018 about the agency’s efforts to influence the election had already been published last October — in an article by a Russian business magazine, RBC.

In a 4,500-word report titled “How the ‘troll factory’ worked the U.S. elections,” journalists Polina Rusyaeva and Andrey Zakharov offered the fullest picture yet of how the “American department” of the IRA used Facebook, Twitter and other tactics to inflame tensions ahead of the 2016 vote. The article also looked at the staffing structure of the organization and revealed details about its budget and salaries.

“Zakharov agreed to answer some questions for WorldViews about his reaction to the details about the IRA in Mueller’s indictments (Rusyaeva left journalism after the story came out, although she stresses she did not do so because of a reaction to the story). Zakharov explained how it was a strange feeling seeing something he had so closely investigated become a major issue in the United States, when it had not been a “bombshell” when he published his report at home.”

WorldViews: You’ve read the Mueller document. What was your reaction to it?

Andrey Zakharov: Well, of all the people who are mentioned there, only some people were the real top managers of the troll factory.

Like [Mikhail] Bystrov, who’s been the head of all its legal entities for a long time. He’s a former policeman. Another guy is [Mikhail] Burchik. We wrote about him. He was the executive director of the troll factory for a long time. And the last guy is Jeyhun Aslanov. He was and I think he’s still with the head of American department.

“The other staff mentioned are very incidental. I mean, it seems like they put down all the names they could get. Some were people who worked there in 2014 — but most of these guys didn’t work for the troll factory for a long time. They didn’t even work there during the elections. Like Krylova, she didn’t work there then. [Aleksandra Krylova is one of the two named Internet Research Agency employees the indictment said traveled to the US in 2014.]”

“I was also very surprised that they wrote private about the private messages of one girl [Irina Kaverzina]. She wrote to relatives that FBI is following them and so on. I think they read her emails. I was very surprised by that. But generally, they seem to have got people who were not careful — who used their own email accounts or registered Twitter accounts to Russian phone numbers.”

” WV: “What was it that made you feel it was time to do a big investigation into the American section of the troll factory?”

AZ: “In March we investigated the troll factory but at that time we focused on another part of it — its work setting up official media agencies. At the end we wrote that the troll factory worked before and after the U.S. elections, and we put some statistics like 15 million likes and shares in one week and some details of the stories they were sharing. Then we forgot about the story.”

“But when Facebook and Twitter announced at the beginning of September that they closed a lot of accounts, your colleagues started to write to us about whether we knew more about this activity. We decided that everybody is so interested in the story, we should make a second investigation. We reviewed what we had uncovered in March, got some more information and wrote it.”

WV: Is it difficult to report on?

AZ: For us it was easier. I lived in St. Petersburg before and worked as a journalist there. Russian media has been covering the troll factory since 2013, long before the big investigation in the New York Times Magazine — and by the way, most of the things in that were just taken from my colleagues.

And so I used to write about the troll factory. I already had sources there. Some of my friends had even worked there as a journalist. Polina had sources, too. But yes, in some cases they were scared. In some cases, foreign colleagues asked us whether our sources would speak to them, but they were too scared to talk with anyone else.

WV: Do you think that Americans misunderstand the troll factory then?

AZ: I just don’t know. When I went in this investigation I thought that maybe we should just take all authentic groups and all movements on Facebook and then compare that with these fake groups which were posted right by the troll factory. Maybe there are more members in the authentic groups? We didn’t do it. But nobody has really tried to measure whether the influence was great or not.

It was very strange when your media started to look into the groups. It was almost like a competition, you know. “We found out that this group was operated by Russians!” but then you’d look at this group and you’d find it only had 100 members. For some time, it looked a lot like your colleagues were just going after facts and not really analyzing it. There was that big investigation of those Macedonian guys, remember? They established fake pro-Trump groups, and their groups were huge. But even though it was said that these Macedonian guys influence American people, everybody forgot about it.

Also, everyone has focused on the pro-Trump groups. What we saw was that they were trying to spread tension in the society, talking about problems people had with black people, Islam and so on. They organized anti-Trump rallies also. Yes, they were active against Hillary [Clinton], but they were not always pro-Trump. They were also active after the election. The story about the Black Fist movement — fake movement self-defense classes for black people — they started this story in 2017.