On February 23, 2018, the republican US President Donald Trump announced a set of sanctions against North Korea and those countries assisting N. Korea to circumvent these US punitive measures. But Russia is one of those countries and guess which country was not subjected to these US sanctions? This is just another example of how the president’s attitude towards Russia is affecting US policy.

But Russia was not targeted…

Though the sanctions take aim at entities across the world for doing business with North Korea, none of those entities are Russian.

“Russia, like China, has been accused of being one of the worst offenders at helping Pyongyang in North Korea evade sanctions.”

President Trump hasn’t even imposed sanctions against Russia after being presented with incontrovertible proof that Russia has conducted a successful major attack against the 2016 US elections infrastructure with the intent to sow chaos and discord with the American peoples and to influence the outcome.

The Secretary of the Treasury, Mr. Steven Mnuchin has insisted the Trump administration would sanction Russian vessels and entities for North Korea issues if warranted. There has been no explanation as to why he managed to specifically mention all the other countries but not Russia.

“President Trump announced harsh new sanctions on Friday (2/23/18)  against North Korea, signaling a return to his aggressive attempt to put pressure on the government of Kim Jong-un after an Olympic Games that had brought a brief lull in the tensions on the Korean Peninsula.” 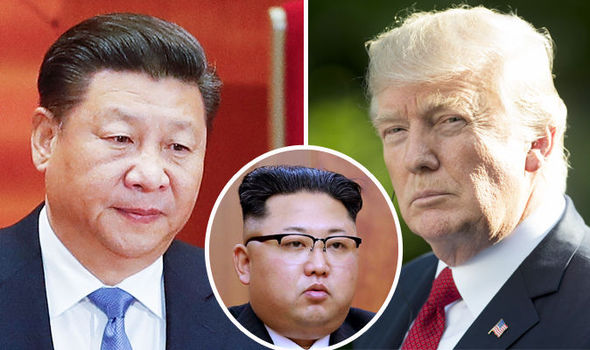 “The sanctions, which target 28 ships registered in China and seven other countries, are intended to close a stubborn loophole in the effort to cut off North Korea’s imports of oil and exports of coal. Illicit ship-to-ship transfers of refined fuel and coal have allowed North Korea to mitigate the pain from those earlier measures, which were imposed in response to the repeated nuclear and ballistic missile tests it has conducted.”

“The smuggling has also inflamed tensions with China and Russia, since both countries are linked to this trade”.

“By going after the shipments, the United States is edging closer to the imposition of an economic blockade on the North. While Treasury Secretary Steven Mnuchin stopped short of saying the Navy would forcibly board ships on the high seas, he said the United States would petition China and other countries to allow inspections of suspicious vessels.”

“Mr. Trump’s move showed that he was determined to tighten the economic vise, even as the North and South embark on a new round of diplomacy. With the Olympics in Pyeongchang, South Korea, drawing to a close, the gauzy images of a unified Korean women’s hockey team and synchronized North Korean cheerleaders are giving way to the grinding business of pressuring Mr. Kim.”

“If we can make a deal, it will be a great thing,” Mr. Trump said at a news conference with Prime Minister Malcolm Turnbull of Australia.”

“If the sanctions don’t work, we’ll have to go Phase 2,” he said, alluding to the threat of military action. “Phase 2 may be a very rough thing — may be very, very unfortunate for the world.”

“The timing of the announcement was striking, coming just a few hours after South Korea’s president, Moon Jae-in, played host at a dinner for Mr. Trump’s daughter Ivanka, who is leading the American delegation to the closing ceremony of the Games.” 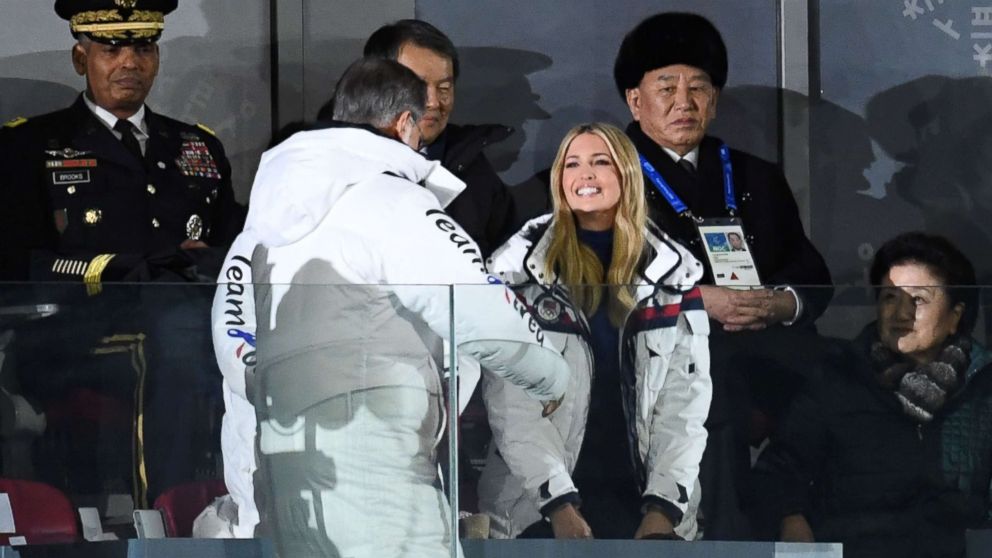 “Mr. Mnuchin said Ms. Trump discussed the sanctions with Mr. Moon before their dinner — grilled soft tofu for her and grilled ribs for him. Ms. Trump, using time-tested diplomatic language, told reporters she would “reaffirm our commitment to our maximum-pressure campaign to ensure that the Korean Peninsula is denuclearized.”

“Mr. Moon left no doubt about his appetite for engagement on Friday. “North Korea’s participation in the Winter Olympic Games,” he said, “has served as an opportunity for us to engage in active discussions between the two Koreas and this has led to lowering of tensions on the peninsula.” 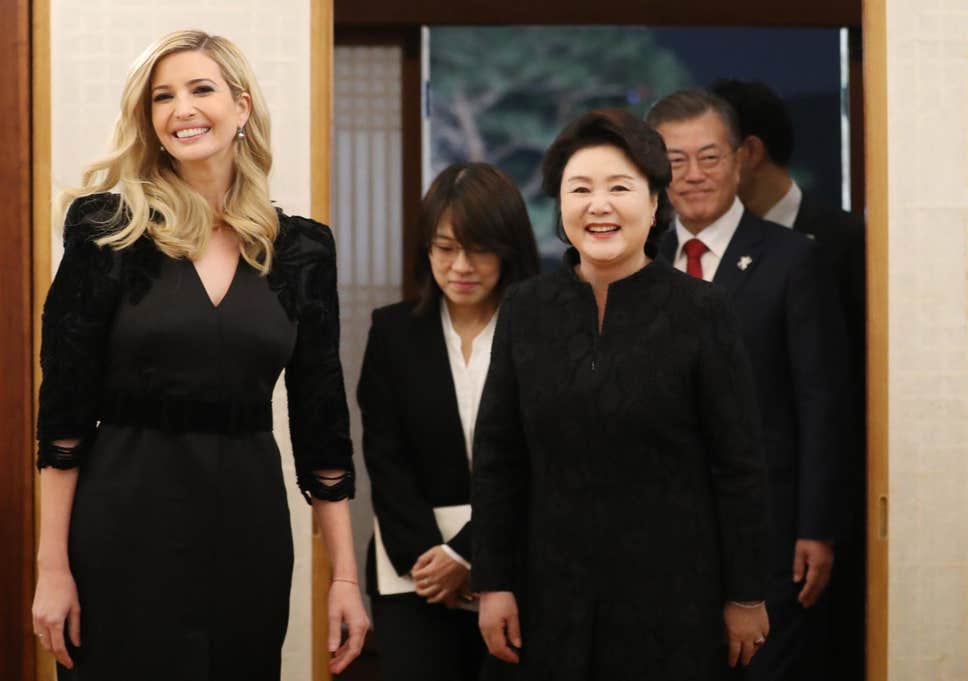 “At Mr. Moon’s prodding, the White House now says it would be open to holding preliminary talks with North Korea, too, a shift from its earlier refusal to do so until Pyongyang stopped its provocative nuclear and missile tests. But the administration’s messages on North Korea remain contradictory, veering from openness to threats of force.”

“By sending his telegenic daughter, Mr. Trump is projecting soft power and possibly countering Mr. Kim’s well-received decision two weeks ago to send his 30-year-old sister, Kim Yo-jong, to the opening ceremony. Mr. Trump also authorized a meeting between Vice President Mike Pence and North Korean officials when he sent Mr. Pence as his emissary to the Games’ opening ceremony. The North Koreans, put off by the vice president’s harsh criticism, canceled at the last minute.”

“But the sanctions underscore Mr. Trump’s readiness to use hard power. The administration described the ones announced this week as the strongest package yet — a distinction that has been true of multiple previous rounds.”

“The administration is trying to do both of these things simultaneously, and the issue is whether it will work,” said Joel S. Wit, an expert on North Korea at the Johns Hopkins School of Advanced International Studies, who was involved in diplomacy during the Clinton administration that led to a nuclear agreement in 1994.”

“If you’re a North Korean,” he added, “you might conclude that their efforts at diplomacy aren’t sincere, that they’re faking it.”

“Mr. Pence first disclosed the sanctions in Japan two weeks ago before he arrived at the Olympics. But the Treasury Department was not prepared to release them at the time, a senior official said, and it has been scrambling to catch up ever since.”

“In the past, the United States has gone after ships suspected of transporting missiles and nuclear proliferation material. But stopping vessels suspected of carrying commercial goods, experts said, would be a major step up in the pressure campaign against Pyongyang.”

Such a move, he predicted, will meet resistance from China and Russia. Those countries thwarted an effort in December by the administration to put a provision into the latest United Nations Security Council resolution on North Korea that would permit countries to hail and board North Korean ships in international waters.

In addition to China, the Treasury Department sanctioned ships from North Korea, Singapore, Taiwan, Hong Kong, the Marshall Islands, Tanzania, Panama, and Comoros. It did not blacklist ships or companies from Russia, even though that country is suspected of supporting the illicit trade.

A senior administration official said the US had raised concerns about smuggling with Russia and had previously designated Russian entities with links to North Korea.

“Whether they’re Russian ships, whether they’re Chinese ships — we don’t care whose ships they are,” Mr. Mnuchin said. “If we have intelligence that people are doing things, we will put sanctions on them.”

He said the 28 ships blacklisted — with names like Oriental Treasure, Asia Bridge 1 and Koti — constituted virtually all the vessels currently known to engage in prohibited trade with North Korea.

The American military has begun contingency planning to stop and board suspect vessels bound for North Korea.”

Navy or Marine warships would deploy small boats carrying troops who are trained in what the Pentagon calls visit, board, search and seizure operations. Once aboard, military officials said, the search party would have two options: sweep the ship and turn it back over to its crew or, if ordered by their commanders, seize it.

The military, however, has options short of boarding, officials said. It could track suspect vessels, by sea or with P-3 or P-8 surveillance planes, until they make port. The United States or its allies could then call on that nation to inspect the ship’s cargo to determine whether it violated existing United Nations sanctions.

Evan S. Medeiros, an Asia director in the NSC during the Obama administration, said, “The administration is walking right up to the line of what’s permissible under international law to aggressively increase the pressure on North Korea.”