aside FACT CHECK: Is QATAR The Major Sponsor Of Terrorism That The US President Claims?

First of all, any credible study over the years has demonstrated that the number one supporter of terrorism via their schools is Saudi Arabia.  As per Wikipedia, “While Saudi Arabia is often a secondary source of funds and support for terror movements who can find more motivated and ideologically invested benefactors (e.g. Qatar), Saudi Arabia arguably remains the most prolific sponsor of international Islamist terrorism, allegedly supporting groups as disparate as the Afghanistan Taliban, Al Qaeda, Lashkar-e-Taiba (LeT) and the Al-Nusra Front.“

“According to two studies published in 2007 (one by Mohammed Hafez of the University of Missouri in Kansas City and the other by Robert Pape of the University of Chicago), most of suicide bombers in Iraq are Saudis. Fifteen of the 19 hijackers of the four airliners who were responsible for 9/11 originated from Saudi Arabia, two from the United Arab Emirates, one from Egypt, and one from Lebanon. Osama bin Laden was born and educated in Saudi Arabia.”

“In short, The major accusers against Qatar, are themselves major sponsors of terrorism, Saudi Arabia and the UAE which has aligned itself with Israeli interests. What all three countries have in common, is their antipathy towards Iran, of the Shia sect. While Saudi Arabia and the UAE both have a history of sponsoring environments favorable to spawning terrorist groups, what these factions are really upset about is Qatar’s ties to Iran. ”

It is important for the US president to have this context when creating US policy pertaining to the middle east and in particular, when he considers tearing up the 2015 US-Iran Nuclear agreement. All three of the above groups want this as well as the ouster of the president’s National Security Adviser General H.R. McMaster who is NOT against the US-Iran deal.

On November 7.2017, Haaretz and AP published the following report, “Fact Check: Is Qatar Supporting Terrorism? A Look At Its Ties To Iran, ISIS and the Muslim Brotherhood” (“Last week, Saudi Arabia, Egypt, the United Arab Emirates and Bahrain severed ties with Qatar amid a slew of punitive measures after accusing it of supporting terrorism”)

“The political crisis engulfing Qatar stems from accusations by its Arab neighbors that it supports terrorism. Qatar denies the allegations, but its ties with Iran and embrace of various Islamist groups have brought intense scrutiny, made it a regional outlier and created enough smoke to suggest a fire. Last week, Saudi Arabia, Egypt, the United Arab Emirates and Bahrain severed ties with Qatar amid a slew of punitive measures. On Friday, the four Arab states upped the pressure by naming 59 people and several charities linked to Qatar on a terrorist list.” 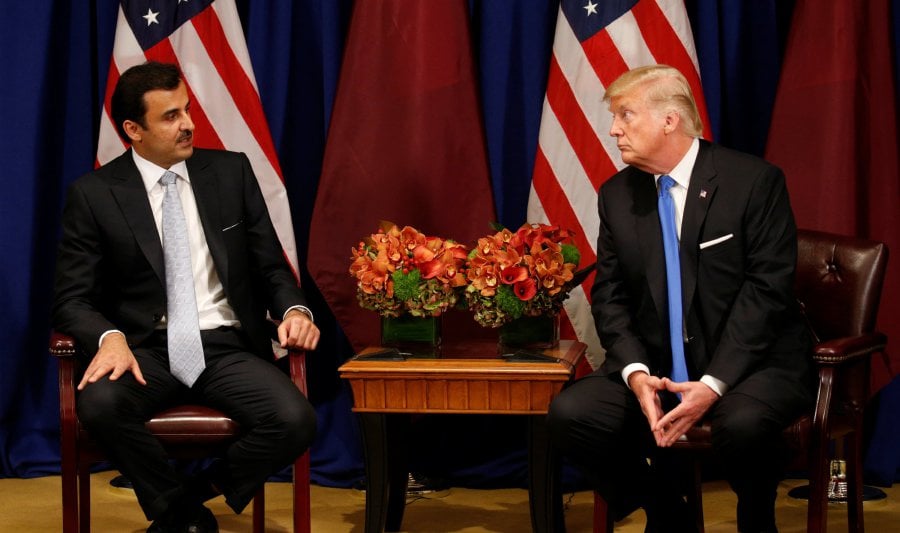 “U.S. President Donald Trump echoed the accusations against Qatar in various tweets and statements since the diplomatic crisis erupted between the Gulf monarchies – althought the Trump administration continues to sell Qatar billions in weapons. During a press conference with the Romanian president at the White House,Trump said Qatar is funding terror “on very high level.” A statement he had made after tweeting, “During my recent trip to the Middle East I stated that there can no longer be funding of Radical Ideology. Leaders pointed to Qatar – look!”

Governments across the region routinely cite terrorism as justification to clamp down on political opposition and rights activists. Some groups Qatar has backed – such as the Muslim Brotherhood – are seen by many as a legitimate political force. Others, including some hard-line Sunni rebel factions in Syria, are not that different ideologically from groups that Saudi Arabia backs there.

Here’s a look at the various groups Qatar’s accused of supporting and its relationship with them:

Al-Qaida and the Islamic State

“Qatar’s Arab neighbors have accused it of backing al-Qaida and the Islamic State group’s ideology across the region, from Syria to the Sinai Peninsula. Experts and groups in Syria say Qatari finances have indirectly propped up militant groups. Similar accusations were leveled at Saudi Arabia and other Gulf countries in the early days of Syria’s 2011 uprising, but experts say these governments amended their official stances and financing laws.”

“Some express concern that the row between Saudi Arabia and Qatar could undermine all finances to the Syrian opposition – where, on the ground, the lines are blurred over which groups cooperate with radicals. Hassan Hassan, a Syria expert, said Qatar has never supported al-Qaida or IS directly. However, he said Qatar has supported Ahrar al-Sham, whose founders are linked to al-Qaida. For its part, Saudi Arabia once hosted members of Ahrar al-Sham at a Syrian opposition conference in its capital.”

“The Islamist Sunni group remains one of the region’s most polarizing. Saudi Arabia, the UAE and Egypt view it as a direct threat to their rule and deem it a destabilizing force. However, the Brotherhood’s offshoots remain active in Jordan and Tunisia. The Brotherhood was elected to power in Egypt after protests toppled longtime autocrat Hosni Mubarak in 2011 and Qatar aided the Brotherhood-led government in Cairo with billions of dollars. It was a key supporter of the group’s offshoots in Syria and Libya.”

“Qatar argues it supported Egypt as a whole, and not one particular faction, when the Brotherhood was in power. Egypt’s military ousted the Brotherhood and unleashed a lethal crackdown against its members amid mass protests in 2013. Saudi Arabia, the UAE and Egypt outlawed the group and branded it a terrorist organization, accusing it of plotting attacks. Brotherhood affiliates in the Gulf have been arrested.”

“Gulf monarchies also accuse Qatar of providing financial support, a safe haven and even citizenship to Islamist opposition figures from their countries.”

The Palestinian group, an offshoot of Egypt’s Brotherhood, is considered a terrorist organization by Israel and its Western allies. The group, which rules the Gaza Strip, has fought three wars with Israel and is seen by some in the Arab world as an armed resistance force against Israeli occupation. Saudi Arabia says Qatar must sever ties with Hamas.”

“Qatar has invested hundreds of millions of dollars in roads, housing and a major hospital in the Gaza Strip offering a lifeline for jobs in the devastated area that is under an Israeli-Egyptian blockade. Its support for the territory makes Qatar one of its few foreign backers. Qatar says its work in Gaza is “purely humanitarian” and its engagement with the group has been in the context of internationally backed peace talks.”

“A deal negotiated recently to release kidnapped members of Qatar’s ruling family has been a source of anxiety for Gulf leaders, particularly in Saudi Arabia, which views Iran as its top adversary. Qatar reportedly paid hundreds of millions of dollars to an Iranian-backed Shi’ite militia that had kidnapped the 26 hostages on Dec. 16, 2015 from a desert camp for falcon hunters in southern Iraq.”

“Egypt has asked the U.N. Security Council to investigate reports that Qatar “paid up to $1 billion to a terrorist group active in Iraq” to free the hostages, which would violate U.N. sanctions.”

“Qatar says it only supported the Iraqi government financially for its efforts in the release of hostages, and that it did not deal with armed groups there. The deal also allegedly resulted in the evacuation of residents of predominantly Shi’ite villages in Syria, where Iran’s proxies hold sway. Several people close to the negotiations say Qatar also paid a hefty sum to Islamist groups in Syria, including one linked to al-Qaida, for the evacuation of the residents. They told The Associated Press that the talks were probably the region’s most complex and sensitive hostage deal.” 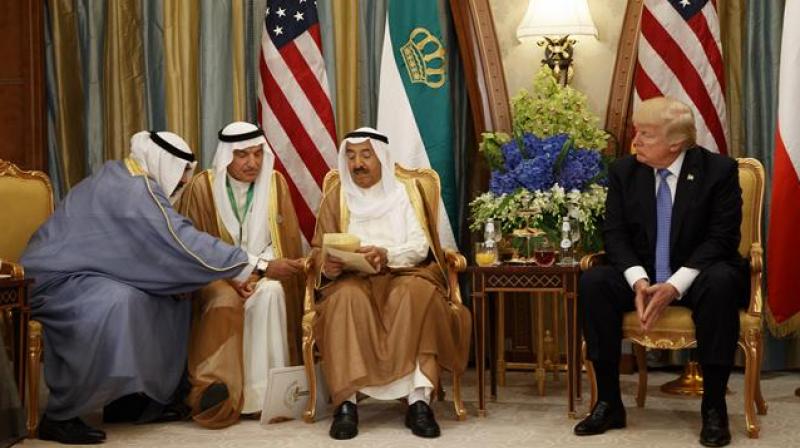 “Saudi Arabia and Bahrain accuse Qatar of supporting Shi’ite militant groups in both countries. Violence has increased in recent weeks between militants and Saudi security forces in a predominantly Shi’ite town in the country’s east. In Bahrain, the Sunni-led monarchy crushed an uprising by majority Shi’ites there in 2011 and continues to crack down on peaceful dissent. Bahraini security forces have since been targeted by local Shi’ite militants.”

“Saudi Arabia has also accused Qatar of backing Iranian-allied rebels in Yemen, known as Houthis. However, Qatar was a member of a Saudi-led coalition bombing the Houthis in Yemen. Experts say there is no evidence to support the claims, but that the accusations appear to stem from negotiations for a transfer of power in Yemen in 2012. Qatar and Saudi Arabia were in disagreement over how to go about it, and Qatar was accused of trying to sabotage a Saudi-led initiative by working with Houthis. Qatar’s ambassador in Washington Meshal bin Hamad Al Thani has said that while the country has ties with Iran and shares with it a vast underwater natural gas field its stance is similar to that of other Gulf Arab States.”