Describing the republican President Donald Trump’s handling of foreign policy decisions as resembling the cartoon character ” Wile E. Coyote” who had a habit of rushing into situations with no real forethought, only to have his actions back fire and blown up.

As per the 3/9/18 Weekly Standard report by Andrew Egger, “Many American officials are skeptical that the news is as good as it sounds, with one Republican telling Axios’ Jonathan Swan that “there is zero chance that Kim talked about ‘denuclearization’ in the sense of giving up his weapons.”

“Senator Lindsey Graham probably said it best in his Thursday statement: “I understand that if the past is an indication of the future, North Korea will be all talk and no action. However, I do believe that North Korea now believes President Trump will use military force if he has to. A word of warning to North Korean President Kim Jong Un—the worst possible thing you can do is meet with President Trump in person and try to play him. If you do that, it will be the end of you—and your regime.”

“The White House thought process on Kim’s invitation, as expressed by a senior administration official Thursday: “President Trump made his reputation on making deals. Kim Jong-un is the one person who is able to make decisions under their authoritarian—uniquely authoritarian—or totalitarian system. And so it made sense to accept an invitation to meet with the one person who can actually make decisions instead of repeating the long slog of the past.”

On March 8, 2018, David Ignatius for the Washington Post shares this commentary, “Trump is Wile E. Coyote”

“Beep beep” was the subject line of an email message I received a few weeks ago from former CIA analyst Robert Carlin, as Kim Jong Un was accelerating his diplomatic charm offensive. “So typical,” wrote Carlin in his brief text. “The North Koreans as Road Runner, the U.S. as Wile E. Coyote.”

“Carlin makes a point that applies to many foreign policy problems around the world. When it comes to global diplomacy, America under President Trump has become something of a hapless cartoon villain, detonating bombs on itself and running into walls — while our nimbler adversaries dart away in a blur of dust.”

“Heavy-handed” is one word for Trump’s foreign policy. “Unsuccessful” is another. His strategy, if you can call it that, has been to disrupt America’s traditional economic and security relationships and commitments. He must imagine that this gives him new leverage, but mostly the result has been a series of self-inflicted wounds.”

“Trade is the most obvious example of Trump’s clumsiness. While our economic competitors in China move to seize the commanding heights of technology, in artificial intelligence, quantum computing and robotics, Trump is trying to protect jobs in steel, coal and other industries that have been in decline for nearly 50 years. He seems determined to transform the United States into a lagging indicator, rather than a leading one.” 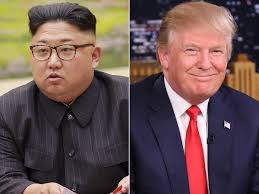 “In the Korea drama, a slow-footed America will soon be paired with the diplomatic speedster. Certainly, Thursday night’s announcement of Trump-Kim direct talks is promising, and perhaps evidence that the president’s braggadocio and belligerence have produced results. But what I see is a North Korea that has become a nuclear-weapons state and now, from a position of strength, wants negotiations with America.”

“Trump thinks Kim is “sincere” in his offer to discuss denuclearization, but few colleagues share that hope. We’ll probably be chasing Kim around a negotiating table for a while, which is better than “duck and cover.” But as Carlin says, “Beep beep.”

“Trump’s most untidy mess is the Middle East. He proclaims his willingness to walk away from the Iran nuclear deal. But strangely, he’s leaving the heavy lifting to European allies, which are drafting tougher provisions on Iranian ballistic missiles, on inspections of Iranian military sites and on the “sunset” of the agreement. Oh yes, they’re also lobbying Congress to support these moves.”

“A tougher agreement would be better, certainly, but to achieve it, Trump seems willing to risk having no agreement, which would be much worse. Here, as in other areas, he engages in the diplomatic version of “magical thinking,” imagining that by wishing something to be true, he can make it so.”

“Trump’s Syria policy is so puzzling that some senior officials don’t even try to explain it. U.S.-backed Syrian Kurdish forces control about one-third of the country, but they’ve become so mistrustful of America’s commitment that they’re walking away from the final, cleanup phase of the war against the Islamic State. U.S. Special Operations forces are risking their lives on the ground, while their commanders wait for policy guidance.”

“On the Israeli-Palestinian front, Trump probably botched his hopes of the “ultimate deal” by breaking long-standing U.S. policy and ordering a quick transfer of the U.S. Embassy to Jerusalem. This dissuaded Palestinians from joining his peace process and, perhaps more important, it made it impossible for Trump’s new best friends in Saudi Arabia and the United Arab Emirates to openly support negotiations when Jerusalem was off the table.”

“Trump rightly values his close relationship with Saudi Crown Prince Mohammed bin Salman. But rather than counseling MBS to choose his reform battles carefully, so that he will succeed, the White House lets him fight, Trump-style, on every front. That’s unwise.”

“Meanwhile, as Trump’s bond with Gulf monarchies deepens, America’s traditional alliances with Europe are fraying. At a conference here sponsored by the German Marshall Fund (of which I’m a trustee), Bruce Stokes presented a Pew Research Center survey showing that transatlantic leaders believe U.S. relations with Europe are even worse than they feared a year ago — with 60 percent seeing discord on economic issues, 84 percent on diplomacy and 66 percent on security.”

“As for Russia and China, the United States’ two great power rivals, what strategy has Trump adopted? With Moscow, he has mostly sat on his hands; with Beijing, he’s been the biggest cheerleader for “president for life” Xi Jinping. He accompanies these weak policies with his usual tough talk.”

“Like Wile E. Coyote, Trump doesn’t seem to understand why the dynamite stick keeps blowing up in his hand.”