aside Democratic Conor Lamb Just Won The Race For PA. US Congressional Seat In Trump Country

The vote count for those who showed up to cast a ballot on the 13th of March 2018, the votes were virtually tied with the democrat Conor Lamb having a slight lead over the republican Rick Saccone. The absentee votes from Allegheny county bolstered the Democrat’s lead by over 800 votes. As the rest of the absentee votes come in on the 14th of March, we’ll know more as to how close this election is, but at this point, the Democrat Conor Lamb will be able to sustain his lead. In a state-wide race, if the election is within .5 points, there will be an automatic recount. But this is not state-wide, and so. I don’t know what the rules are.

“What does it take for a Democratic Candidate like Conor Lamb to win in a March 2018 special election for a US congressional seat in Pennsylvania’s 18th district where the republican President Trump won by 20 percentage points in 2016; where the number of registered voters typically vote for the republican party representative in numbers that far exceed that of democrats and where the Democrat was outspent in a 10 to 1 ratio by his republican opponent?

As per a 3/6/18 VOX report, “The district, which currently covers the southwest corner of Pennsylvania, should have been an easy race for Republicans. It’s rated as an R+11 district, a heavy Republican tilt.”

According to the Washington Post, “as of February 27, Saccone-allied groups had spent a total of $9.1 million on the race, between the Congressional Leadership Fund, the National Republican Congressional Committee, and others. Meanwhile, Democratic groups and labor unions had spent less than $1 million.”

“Mr. Lamb fits the profile of a decent man who is former marine and a local prosecutor but still one of the hard working folks he wants to represent. He did not focus on President Trump at all, but instead he conversed with voters about what he could do for them, What he didn’t do is equate those not voting for him with peoples who hate God, like his opponent did at a recent prior event. In short, he reached out by treating everyone with respect. ”

Tuesday’s special election in Pennsylvania’s 18th congressional district may be one of the most important races of 2018. It may also be one of the least consequential. The campaign between Democrat Conor Lamb and Republican Rick Saccone is for a House seat that will not exist in November. (The courts have ordered the voting district’s map to be redrawn.)

“But in a district that includes coal country and Pittsburgh suburbs in equal measure, the election has little to do with the current balance of power. It is about something much more important and much less tangible: the narrative.”

“Lamb is a 33-year-old veteran whose Homeric epithet could be “square-jawed marine”. He has run a well-regarded campaign, wooing suburbanites unhappy with Trump and blue-collar workers with Democratic roots who went Republican in 2016.” 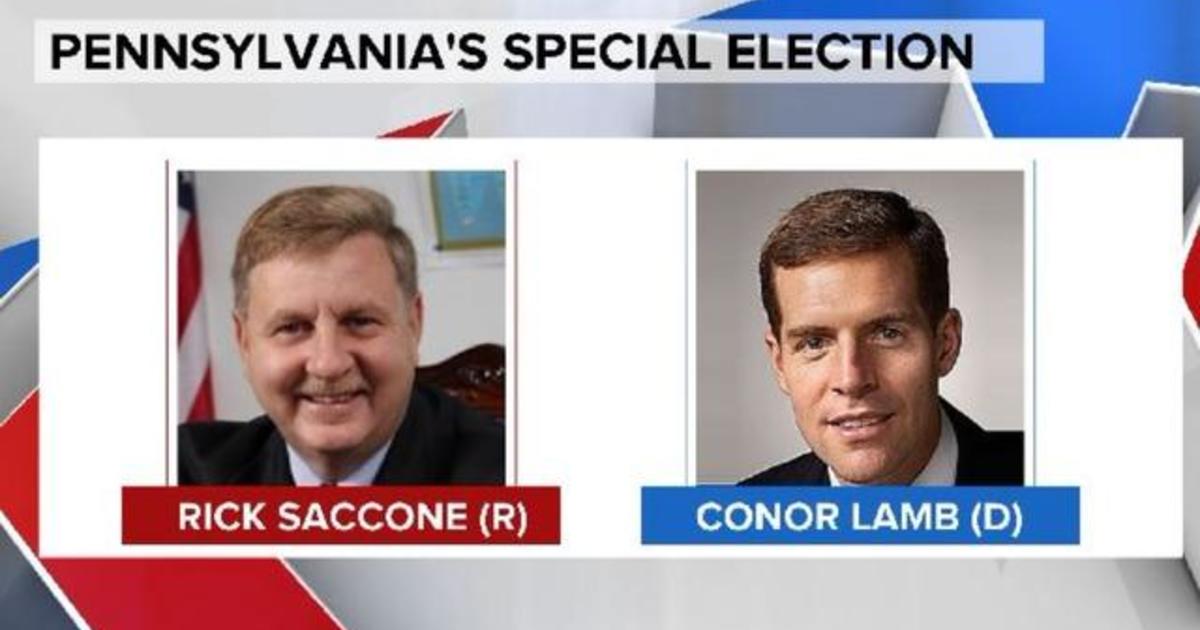 “Saccone has floundered. A state legislator who claims to have been “a diplomat in North Korea”, he has been a weak fundraiser. National Republican groups have spent more than $10m to help him. The result has been a hodgepodge of ads, from a claim the Democrat is “Nancy Pelosi’s little Lamb” to touting Republican tax reform to simply bashing Lamb as weak on crime.”

“None of the attacks caught fire with voters, especially after Lamb recorded a straight-to-camera ad in which he said he would not support Pelosi.”

“The previous representative, anti-abortion Republican Tim Murphy, was forced to resign last year when it was reported he urged his mistress to have an abortion. In February, the race to succeed him took on a unique character when the state supreme court ruled the state’s congressional districts unconstitutional, due to Republican gerrymandering, and redrew the map. The result is that the 18th will be split, its Pittsburgh suburbs going into one district, the surrounding rural area to another.”

“Lamb has been old-fashioned. An event in Pittsburgh in February seemed more appropriate for early 20th-century Boston. Irish music blared through a banquet hall as an older crowd gulped beer from kegs and grabbed pretzels from shamrock-shaped bowls. Proceedings even closed with a rendition of Danny Boy. Former Maryland governor Martin O’Malley was there to lend a hand.”

“On Sunday in Waynesburg, Lamb appeared with the head of the United Mine Workers, Cecil Roberts. Waynesburg is the seat of Greene county, which Trump won by 40 points and Ronald Reagan, in his 1984 landslide, lost by 20. It could be ground zero for Trump  Democrats. At Lamb’s event, the room filled with white men in camouflage jackets and union hats.”

“George Campbell, a retired miner from Westmoreland, told the Guardian he was there because he had received a letter from the union. Although the terse, mustachioed 68-year-old said he “voted Democrat more than the other”, his choice in 2016 “wasn’t Hillary”. He was just worried about his pension, he said, adding that in the voting booth, “I pretty much go with what the union says”.

“His union did not endorse in the 2016 election but now its leader was all out for Lamb. In a fiery speech, Roberts hailed the Democrat as “a God-fearing, union-supporting, gun-owning, job-protecting, pension-defending, social-security-believing … sending-drug-dealers-to-jail Democrat.”

“Saccone has been running close to Trump, who held a rally for him on Saturday night. The chance to speak before the president, Saccone said, was “the ultimate blessing”.

“On Monday, Trump’s oldest son showed up. A vote for Saccone, he said, was a vote for his father.”

“Just because [Donald Trump] is not on the ticket does not mean that everything he stands for and represents for the future isn’t on the ticket,” Donald Jr said, to a crowd of around 100 at a Veterans of Foreign Wars post in Elizabeth, a hardscrabble town just two miles downriver from the setting of The Deer Hunter.”

Saccone has become increasingly bitter, towards the media and his opponent. In a debate, he claimed Lamb did not know the difference between North and South Korea. That brought a rebuke from the moderator. On Monday, speaking before Donald Jr, he went further.

“The other side,” he said “… has a hatred for our president … for our country. I’ll tell you some more, my wife and I saw it. They’ve a hatred for God.”

“Lamb has been almost painfully non-controversial. Speaking to the Guardian on Saturday, he went out of his way to avoid questions about Trump’s rally.”

“I’ve been telling people what I’m for on the issues,” he said, “not what I’m against.”