aside Before FBI Acting Director McCabe Was Fired, AG Sessions Had Been Under Perjury Investigation

The republican President Donald Trump’s Attorney General Jeffrey Sessions is claiming that he was totally unaware of himself having been a party to a FBI  investigation headed by Andrew McCabe, for a possible perjury charge due to Mr. Sessions not admitting, when questioned, to contacts with Russian officials at a US Congressional hearing while he was under oath. At the very least, he is guilty of a “lack of candor,” the very offense that Mr. McCabe was accused of committing before Mr. Sessions fired him.

Why do I believe that the AG Jeff Sessions is lacking candor again?

“The F.B.I. investigated Attorney General Jeff Sessions for possible perjury last year over congressional testimony in which he said he had no contacts with Russians, according to three people familiar with the case.”

“In fact, Mr. Sessions later acknowledged, he had personally met the Russian ambassador to the United States during the campaign and was aware that George Papadopoulos, a campaign adviser, had developed Russian ties, too. F.B.I. agents were aware of both inaccuracies in real time. And last March, when Congress asked the F.B.I. to investigate the attorney general, agents began doing so, two of the people said.”

“Andrew G. McCabe, the F.B.I.’s deputy director at the time, authorized the investigation, the two people said. Mr. McCabe himself was recently firedfor showing “lack of candor” in an internal investigation. Mr. Sessions rejected Mr. McCabe’s appeal and fired him hours before his retirement was to take effect, jeopardizing his pension.” 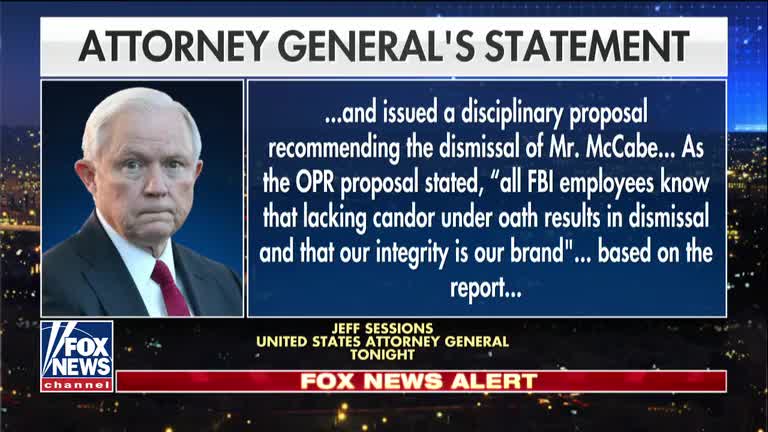 “The investigation was first reported by ABC News.”

“Perjury investigations based on congressional referrals are common, and the F.B.I. frequently investigates but seldom charges. But the fact that the attorney general himself was a focus of the Russia investigation, even if only peripherally and temporarily, shows how entangled the Trump administration has become in the case. Mr. Sessions is recused from any aspect of the investigation.”(This includes Mrs. Clinton’s Foundation/ email handling probe.)

“The investigation also adds a new layer to Mr. McCabe’s firing. Mr. McCabe’s lawyers have said that he did not lie and acted quickly to fix any inaccuracies or misunderstandings. Mr. Sessions has offered a similar defense, saying he never intended to mislead Congress.”

“A person close to Mr. Sessions said the attorney general was not aware of the investigation into his congressional statements when he fired Mr. McCabe. The investigation never came up during the negotiations over whether Mr. Sessions would fire Mr. McCabe, according to two people with knowledge of those discussions.”

“The testimony in question surfaced as part of Mr. Sessions’s confirmation hearing in January 2017. Senator Al Franken, Democrat of Minnesota, asked Mr. Sessions about a recent CNN report that Trump campaign surrogates and Russian government intermediaries had exchanged information during the campaign.”

“If there is any evidence that anyone affiliated with the Trump campaign communicated with the Russian government in the course of this campaign, what will you do?” Mr. Franken asked.

“I’m not aware of any of those activities,” Mr. Sessions replied. “I have been called a surrogate at a time or two in that campaign and I didn’t have — did not have communications with the Russians, and I’m unable to comment on it.” “After The Washington Post revealed that Mr. Sessions had met privately with the Russian ambassador, Mr. Sessions returned to Capitol Hill and said his testimony had been accurate if read in the context of Mr. Franken’s larger question. He said he met the ambassador in his capacity as a senator, not as a campaign surrogate.”

“You don’t believe that surrogates from the Trump campaign had communications with the Russians?” Mr. Franken asked in October.”

“I did not, and I’m not aware of anyone else that did,” Mr. Sessions replied. “And I don’t believe it happened.” (He was in meeting with when he bragged about Russian contacts in possession of Mrs. Clinton’s emails.)

“That only compounded Mr. Sessions’s problems because court documents and news reports soon revealed that Mr. Papadopoulos, a young campaign aide, had boasted about his Russian ties in a meeting with Mr. Sessions and Mr. Trump. Mr. Sessions returned to Congress and again denied lying.”

“I have always told the truth,” Mr. Sessions told the House Judiciary Committee in November. He said he stood by his previous testimony because “I had no recollection of this meeting until I saw these news reports.”

“Mr. McCabe’s allies have pointed in recent days to these clarifications and asked why Mr. McCabe did not receive the same benefit of the doubt as the attorney general. But it is impossible to compare the cases because the Justice Department’s inspector general has not released his report explaining his concerns about Mr. McCabe’s candor.”

“Mr. Mueller is investigating the Russian government’s efforts to influence the outcome of the 2016 presidential election and whether anyone in the Trump campaign participated in those efforts. Mr. Trump has repeatedly said there was “no collusion,” and his aides initially flatly denied any contacts between the campaign and Russia.”

“But journalists and investigators have uncovered repeated examples of those contacts, including one in which a Kremlin-connected lawyer met with top campaign officials at Trump Tower after promising politically damaging information about Hillary Clinton. And Mr. Papadopoulos has testified that he learned from an intermediary to the Russian government that Moscow had damaging emails about Mrs. Clinton before that was publicly known.”

“Mr. Mueller interviewed Mr. Sessions early this year as part of his investigation. Mr. Mueller’s office recently told Mr. Cooper that he could publicly say that the attorney general was not under investigation and was considered a witness in the case.”