Over the years, the far right conservative republicans have developed a cottage industry of orchestrating hate campaigns of leaders on the left that they fear. The level of hate, “fake news,” marketing dissemination engendered on the right against Democratic leaders like our former US President Barack Obama are legendary. Their marketing endeavors have been incredibly effective as demonstrated by the following example where even when absolute proof was proffered, the lie is still believed by a vast majority of republicans.

As per a 8/10/2016 NBC report, “Seventy-two percent of registered Republican voters still doubt President Obama’s citizenship, according to a recent NBC News|SurveyMonkey poll conducted in late June and early July of more than 1,700 registered voters. And this skepticism even exists among Republicans high in political knowledge.” There are numerous fact checking web-sites like Snopes.com which have made business over the years of verifying many of of the right’s claims like the Uranium One scandal against Mrs. Hillary Clinton while she was the US Secretary of State from 2009-2013.

Now we as decent folks from the right, middle and left cannot allow the right wing zealots to successfully and falsely mar the reputations of these young potential leaders who are just starting out in life. The right has already tried to portray them with totally “fake news” personnas along the lines like, that these young peoples are paid actors, opportunists looking for fame and fortune, advocates for the elimination of all guns, that the one NRA aligned student Kyle Kashuva has not been granted equal time to present a counter viewpoint, and these attempts are just the beginning.

In their sights right now is their newest bogeyman, Emma Gonzalez who is an 18 year old survivor of the Valentine Day’s mass shooting in a Parkland High School in Florida, where 17 victims were fatally gunned down in a little over 6 minutes by a young man under 21 years old with an AR15.

Since that moment of terror, she has demonstrated an immense promise for being a future leader, and so the right cannot allow her to succeed unscathed.

On March 26, 2018, Alex Horton for the Washington Post penned the following report, “A fake photo of Emma Gonzalez went viral on the far right, were Parkland teens are villains”

How Emma González became an enemy of the far right
“Having teenagers act as figureheads for a movement has a certain quality that has not gone unnoticed in the wake of the March for Our Lives rally on Saturday (24th March 2018).”

“Judge too harshly, and you are attacking a kid who has balanced trauma with homework. Amplifying students such as Emma González has injected optimism among liberal activists in the grinding debate about the role of guns in society.”

“González, 18, has been at the flash point of this dynamic, appearing in newspapers, on magazine covers and in a prominent spot at the anchor rally in Washington, where her speech, which included a prolonged silence, lasted as long as the six minutes it took a gunman at her high school in Parkland, Fla., to kill 17 people on Valentine’s Day.”

Gun-control advocates have held up González as a figurehead of the movement, splashing her trademark shaved head on T-shirts and viral images.

Then, there is another viewpoint of her activism.

A doctored animation of González tearing the U.S. Constitution in half circulated on social media during the rally, after it was lifted from a Teen Vogue story about teenage activists. In the real image, González is ripping apart a gun-range target.

The doctored image mushrooming across social media appeared to confirm the belief among Second Amendment absolutists that calls for stricter gun-control measures are transgressive, destroying the very foundation of the United States.

The animation bounced around conservative Twitter before it received a signal boost Saturday from actor Adam Baldwin.

He tweeted to a quarter of a million followers with a hashtag reading “#Vorwärts!” — the German word for “forward” and an apparent reference to the Hitler Youth, whose march song included the word.

“Gab, the Twitter-like social network that is a popular refuge for the alt-right, tweeted the animation on Saturday to more than 100,000 followers, then hours later asserted it was “satire.” It racked up more than 1,200 retweets. The still images, looking more sophisticated than the glitchy animation, went further, appearing to be taken as legitimate by  some  conservative-minded Twitter users.”

“Donald Moynihan, a professor at the University of Wisconsin at Madison, debunked the altered image, saying in a tweet: “Just a sample of what NRA supporters are doing to teenagers who survived a massacre,” referencing a user named “Linda NRA Supporter” who posted the photo and whose account has since been suspended.”

“Moynihan’s tweet keyed on an idea: Public moments by the Parkland students are being scrutinized and stretched to either bolster or tear down arguments on social media, built on the traditional debates made around the dinner table.”

“Generally, one form of criticism of González and fellow students such as David Hogg, 17, has focused on their ages.”

“They are too naive and young to grasp the extent of how money, politics and policy intersect, the argument goes. It was cemented in the right’s criticism of Hogg’s insistence that clear backpacks would infringe on civil rights.”

“The online effort to defuse Hogg has paid off. The first “top news” video that appears in a YouTube search for “David Hogg” is a takedown from conservative outlet the Blaze. “It’s hard to not just go after this kid,” host Pat Gray said in the video published Saturday, describing Hogg.”

“Other elements of González have been used in an attempt to discredit her, online and off.”

“For instance, some in conservative circles have circulated images calling attention to a Cuban flag sewn to her jacket.”

“Emma Gonzales, wearing the flag of an authoritarian communist nation. Makes sense, they both hate an armed citizenry,” one meme shared on Reddit’s conservative page r/TheDonald. It was shared on social media through variations of the theme, including one by conservative commentator Andrew Wilkow. González’s father migrated from Cuba to the United States.”

“As The Post’s Samantha Schmidt reported, the flag came under attack Sunday from the campaign of Rep. Steve King (R-Iowa).”

“This is how you look when you claim Cuban heritage yet don’t speak Spanish and ignore the fact that your ancestors fled the island when the dictatorship turned Cuba into a prison camp, after removing all weapons from its citizens; hence their right to self defense,” said a post on King’s campaign page on Facebook. The post also included a photo of González at the podium Saturday.” 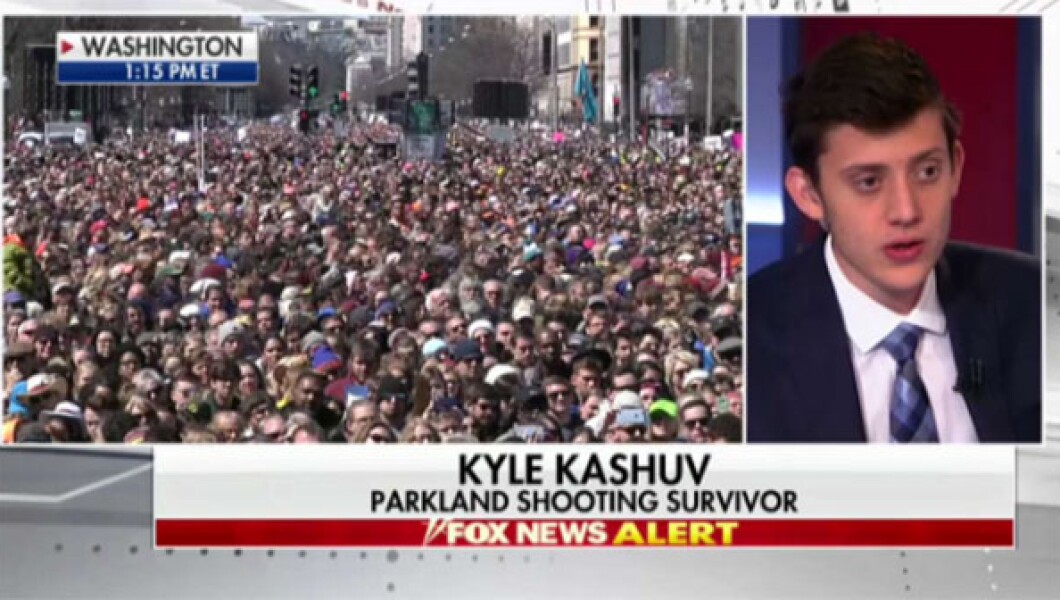 “A self-identified conservative Parkland student also has been buttressed by the right, which thinks he identifies with its politics — a de facto foil to his classmates. Kyle Kashuv, 16, visited President Trump and five Republican U.S. senators just three weeks after the killings to offer alternatives in the debate.”

“The initial movement, in its purest form, was amazing. It got corrupted because now it’s represented as anti-gun and anti-NRA. ‘Boycott this, boycott that.’ It’s detracting from the actual discussions,” Kashuv told The Post’s Dan Zak about the work of his classmates.”

“Since then, Kashuv has been an occasional guest on Fox News Channel, sometimes calling for middle ground with fellow classmates and among those who disagree in the debate. Kashuv has echoed critics on the right that a focus on law-enforcement failures, not gun laws, is the way forward.”

“But he has also targeted his classmates.”

“Hogg’s comments at the rally were “egregious and inflammatory,” Kashuv said on Fox News on Saturday, and he has criticized Hogg numerous times on Twitter. On Sunday, Kashuv challenged classmate Cameron Kasky to a debate. His argument has been bolstered by the NRA, which has published videos decrying Hogg’s use of explicit language and suggesting his activist peers would be unknown if their classmates were still alive, saved by a gun-carrying officer.”

See: [ How the Parkland teens became villains on the right-wing Internet ]

See: [ NRA host taunts Parkland teens: ‘No one would know your names’ if classmates were still alive ]