aside What Is The US Doing In Yemen? In 2015, We Were Supposed To Be There For Only 6 Months

The atrocities and devastation that the US has contributed by inflicting on the peoples of Yemen, incalculable harm, by acting on behest of the Saudis is beyond outrageous. We hear little about what’s been happening with US participation in media outlets. In 2015, the US peoples were told by President’s Obama’s administration that US military personnel would be in this region for only 6 months. Why are we still in Yemen!

The Saudis have NOT been good actors in this catastrophe that they created to where the US should not be a party to anything except ending the war. If not for the Saudis, this war could have been ended in 2016.

On January 22, 2018, Nicolas Niarchos of the New Yorker penned the following report, “How the U.S. Is Making the War in Yemen Worse” (“The conflict has killed at least ten thousand civilians, and the country faces famine. Why are we still involved?”) 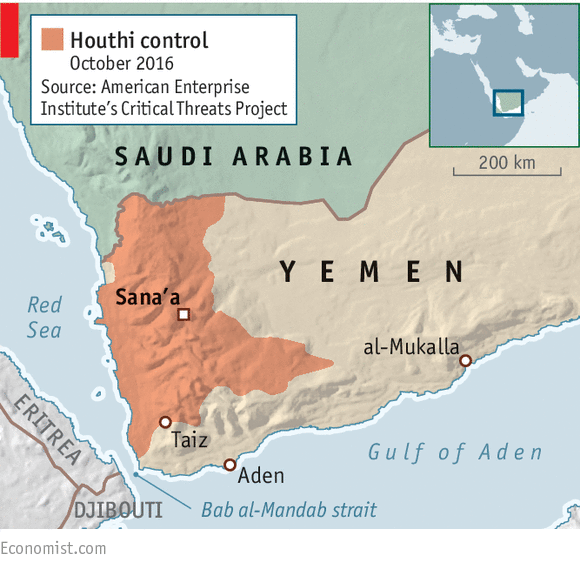 “Funerals in Yemen are traditionally large affairs. When prominent figures die, hundreds or even thousands of people come to pay their respects and to pray for them. Abdulqader Hilal Al-Dabab, the mayor of Sana’a, Yemen’s capital, could expect such treatment. But Hilal used to ask for a simple burial. “If I get killed when I’m in office, I don’t want a state funeral,” he told his sons. He wanted to be buried in a grave he’d reserved next to his father’s.”

“Hilal had seen enough devastation to know to make plans for his demise. In the past three decades, Yemen has had nine wars, two insurgencies, and a revolution; Hilal governed a region with strong ties to Al Qaeda, and had survived an assassination attempt. A father of eleven, he was a former marathon runner who won North Yemen’s inter-university challenge three times. In Sana’a, Hilal kept a garden with a gazebo, where he received guests. Stephen Seche, the former United States Ambassador to Yemen, recalled sitting there while Hilal explained Yemeni politics. Other diplomats saw him as a moderating force, someone who could negotiate the intricate mesh of tribal, business, and political affiliations that make up Yemeni society.”

“Yemen’s most recent conflict began in early 2015, when Houthi rebels, from the country’s northern highlands, overran Sana’a and a Saudi-led coalition began bombing them. The Houthis allied with a former President and co-opted tribal networks in an effort to solidify and expand their power. Now they control much of the northwest of the country, while the internationally recognized government holds the south and the east. The Saudi coalition is made up of nine Middle Eastern and African countries, and is supported by the United States.”

Sana’a has been in Houthi hands since the start of the war, but Hilal was neutral. “He had a lot of the right characteristics of somebody who you easily could have seen as being the person that would have been a consensus figure to emerge as a new transition President or Vice-President or Prime Minister,” Matthew Tueller, the current U.S. Ambassador, told me. 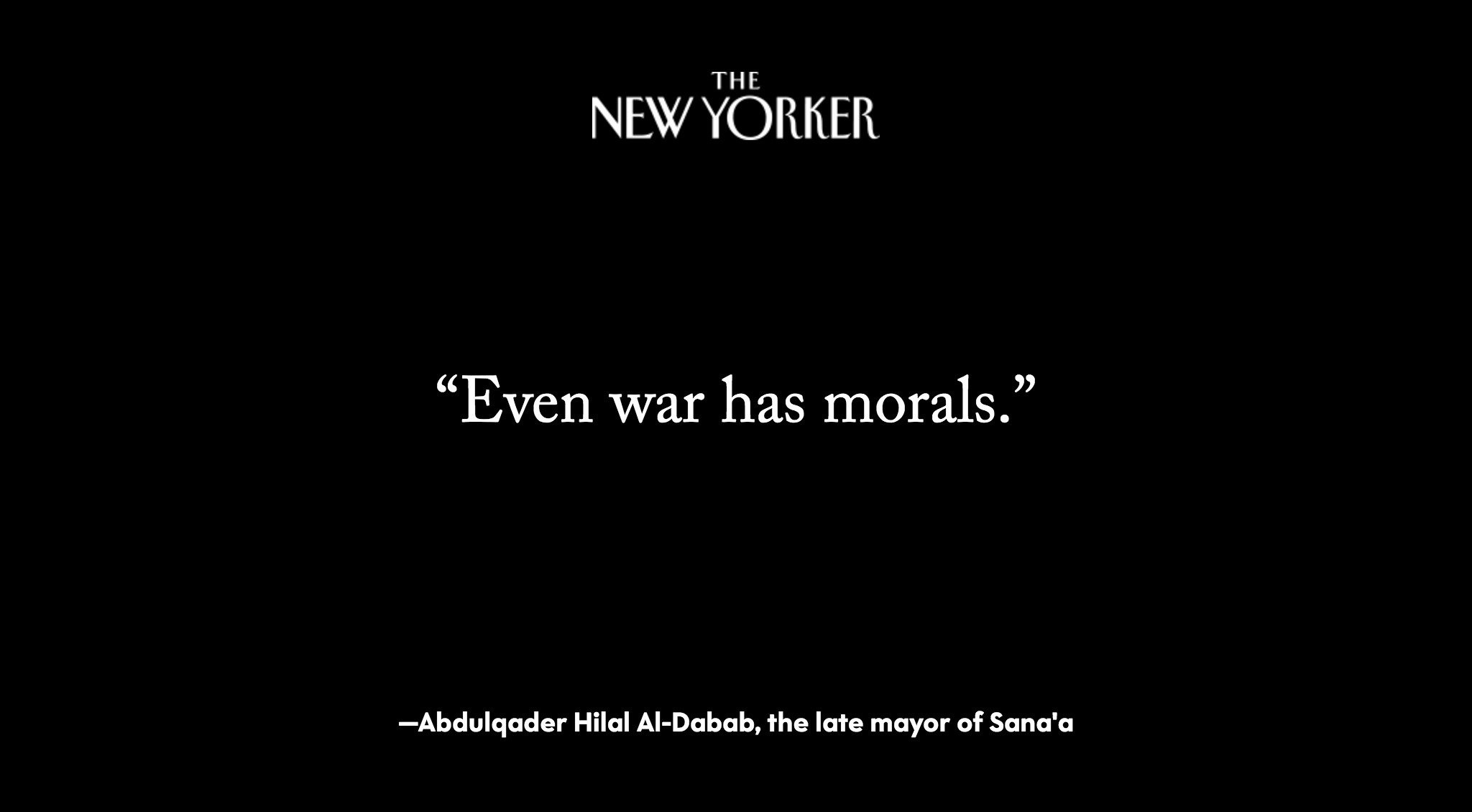 “In early October, 2016, the father of Hilal’s close friend Jalal al-Ruwayshan died. Ruwayshan, the Minister of the Interior, was working with Hilal in negotiating between Yemen’s various factions to end the war. The Ruwayshan family announced that it would receive condolences at the Al-Sala Al-Kubra Community Hall, in Sana’a. On the night before the funeral, Hilal’s son Hussein called his father and asked him to urge the Ruwayshan family to consider postponing the event. Since the beginning of the war, the Saudi coalition’s air strikes have hit large civilian gatherings. Hilal replied that the Saudi Air Force would not bomb the funeral. “Even war has morals,” he said.”

“As Hilal left for the funeral, Ammar Yahiya al-Hebari was preparing his d.j. mixing board at the community hall. Hebari is a solid-looking forty-year-old, with a white stripe in his hair. He is famous across northern Yemen as a funeral chanter. Like Hilal, Hebari thought there would not be a strike. The rebels and the Saudi government had just agreed to a U.N.-brokered truce, and the funeral “was not a political or political-party gathering,” he told me.”

In the early afternoon, the hall began to fill with men wearing white head scarves and the traditional curved daggers, called janbiyas, in their belts. Many were chewing high-quality khat, a mild stimulant leaf, which had been brought from Khawlan, the seat of the Ruwayshan family. At around one-thirty, Hebari started to chant. He estimated that some three thousand people had crowded into the hall. A rumor spread that the former President of Yemen, Ali Abdullah Saleh, a Houthi ally, would soon arrive. Documents given to Nawal Al-Maghafi, a journalist who made a documentary about the day’s events for the BBC, show that informants were providing the Saudi coalition with updates on who was there.

When Hilal arrived, Hebari noticed how relaxed he appeared. At one point, a beggar approached Hilal. Hilal reached into his shirt pocket and gave the beggar all his cash. “This was his last act,” Hebari told me.

A little after three o’clock, one of Hilal’s guards heard a noise. It was a coalition jet, crashing eastward through the hot afternoon sky. “Boss, I heard a jet,” he said. Hilal looked at him and shook his head. The hall rumbled with the noise of an aircraft a second time, louder, lower. The guard turned nervously to Hilal. The Mayor grinned and said, “Son, I’m not going to leave.”

“The third time that the hall shook, Hilal’s guard heard the sound of air whistling against the tail fins of a bomb as it zigzagged toward them, its guidance system making corrections to its trajectory. “Sir, it’s a missile!” he shouted. Hilal was smiling. The floor erupted in flames. As the guard lost consciousness, he saw a wall collapse and crush Hilal.”

“More than a hundred and forty mourners were killed and five hundred were wounded in the strike. Afterward, Yemeni investigators unearthed a tail fin of one of the bombs. The serial number indicates that the bomb, a Mark-82—a sleek steel case eighty-seven inches long, twelve inches in diameter, and filled with five hundred pounds of explosive—was produced by Raytheon, the third-largest defense company in the United States. The bomb had been modified with a laser guidance system, made in factories in Arizona and Texas, called a Paveway-II. The weapons are sometimes referred to as “dumb bombs with graduate degrees.” “They had been sold to the Saudis on the understanding that they would make their targeting more accurate,” Mark Hiznay, the associate arms director at Human Rights Watch, told me. “It turned out that the Saudis were failing to take all the feasible precautions in attacks that were killing civilians accurately.”

“Many who died had been negotiating between the warring factions. “It was such a foolish strike, because even the Saudis recognized that more people who were sympathetic to the Saudi position than the Houthi position were killed,” a senior State Department official told me. I asked a senior Arab diplomat from the Saudi coalition whom he could envisage in a transition government. “Who would you hand Yemen to? Who would be part of that?” he asked. “There is nobody.”

“Since the war began, at least 10,000 Yemeni civilians have been killed, though the number is potentially much higher, because few organizations on the ground have the resources to count the dead. Some 3 million people have been displaced, and hundreds of thousands have left the country. Before the war, Yemen was the Middle East’s poorest state, relying on imports to feed the population. Now, after effectively being blockaded by the coalition for more than 2- 1/2 years, it faces famine. More than a million people have cholera, and thousands have died from the disease. unicef, the World Food Program, and the World Health Organization have called the situation in Yemen the world’s largest humanitarian crisis.” 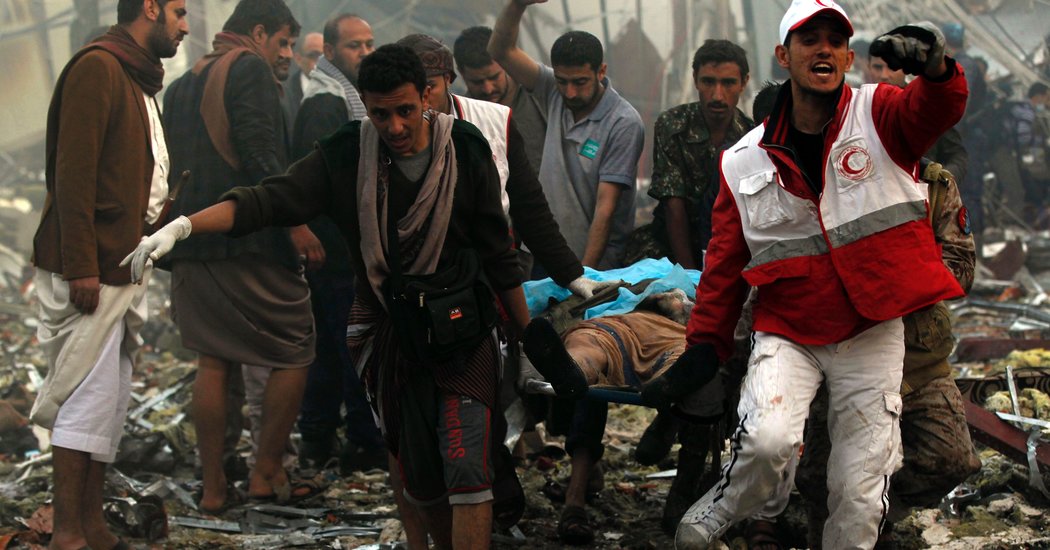 Yet the U.S. and Great Britain have continued to support the coalition, mainly with weapons sales and logistical help. (A small contingent of U.S. Special Forces fights Al Qaeda militants in the south of the country.) Without foreign assistance, it would be very difficult for the Saudis to wage war. As casualties mount, legislators in the U.S. have begun to question support for the Saudis. Nonetheless, the Administration of Donald Trump has refused to criticize the kingdom.