The police were called one evening around the 18th of March 2018 from a Sacramento, California neighborhood regarding a young man vandalizing residents’ cars. This was not a young man committing crimes of violence which required a swarm of police officers to arrive in the vicinity of the complaint with guns drawn and a helicopter circling above.

But that is what happened. A 22 year old Black man, Stephon Clark was outside his Grandma’s home with only a cell phone, which means no other implement used in committing acts of vandalism were on his person, when he was confronted by a swarm of law enforcement officers who shouted at him but who then proceeded to fire at least 20 gun shots at him. As soon as this happened, the police muted the sound from their recording machines.

Of course the community of Sacramento is up in arms over this senseless tragedy of police again fatally shooting an unarmed young man of color. Unfortunately, the USA suffers from too many of these type of cases.

The preliminary results of an independently ordered autopsy has just been released on the 30th of March 2018.

On March 30, 2018, Joseph Serna and Paige St. John of the LA Times penned the following report, “Stephon Clark was shot six times in the back. independent autopsy shows”

“Stephon Clark, the unarmed African American man whose shooting by police has caused protests and national outcry, was shot six times in the back, an independent forensic pathologist said Friday (3/30/18).”

“Dr. Bennet Omalu conducted an autopsy days after Clark was killed by police. He told reporters that his examination showed that Clark was hit by eight bullets, and all but one entered while his back was facing police.”

“Dr. Bennet Omalu conducted an autopsy days after Clark was killed by police. He told reporters that his examination showed that Clark was hit by eight bullets, and all but one entered while his back was facing police.”

“The eighth bullet that hit Clark entered his left thigh from a forward-facing and likely came while he was on the ground and had already been shot multiple times, Omalu said.”

“The county coroner’s official autopsy results are not expected to be completed for several weeks.”

“Clark, 22, was fatally shot in his grandmother’s backyard on March 18 by Sacramento police, who were looking for a vandal in the neighborhood. More than 20 shots were fired in the incident.”

“Clark was holding a cellphone. No weapon was found.”

“The independent autopsy finding raises new questions about Clark’s shooting earlier this month. Police have released videos showing the incident but have urged the public not to pass judgment on officers until the investigation is complete.”

“His family has disputed police accounts of what led to the shooting, which inspired days of protests in the state capital and made national headlines.”

“Clark was buried after a funeral in Sacramento on Thursday attended by hundreds of mourners, including the Rev. Al Sharpton.”

“We are here to say that we’re going to stand with Stephon Clark and the leaders of this family …. This is about justice,” Sharpton said. “This is about standing with people with courage.”

“Clark’s shooting is under investigation by city police, with oversight by the state Department of Justice.

Sacramento’s mayor has called Clark’s death “wrong,” but said he cannot pass judgment on the officers’ actions until that review is complete.”

“On Wednesday (3/28/18), a police spokesman said Clark remained the sole suspect in break-ins of vehicles and what a sheriff’s deputy said was the attempted break-in of a home. It was calls about those incidents that sent police to the neighborhood the night Clark was shot.

“A Sacramento County Sheriff’s Department helicopter spotted a man in a backyard and directed police toward him, authorities said. Deputies told officers that the man had picked up a “toolbar” and broken the window of a home.” 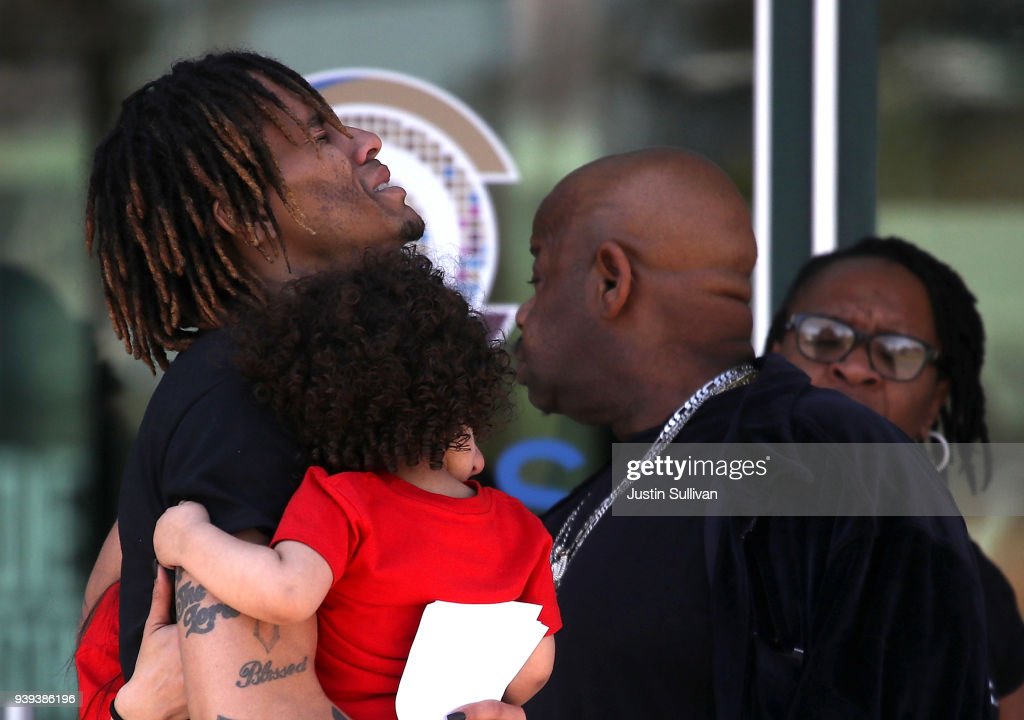 “The man was seen running south, toward the front of the house, where he stopped and looked into another car, police said. Officers ordered him to stop and show his hands, but he ran. They chased him to the backyard, where, authorities say, he turned and advanced toward the officers holding what they thought was a gun.”

“Fearing for their safety, the officers fired their weapons, the department said.”

“In police videos, an officer is heard saying, “Hey, mute,” before the sound cuts off, indicating that the audio recording had been stopped.”

“Sacramento’s police chief said the request to mute “builds suspicion” and is part of the investigation.” 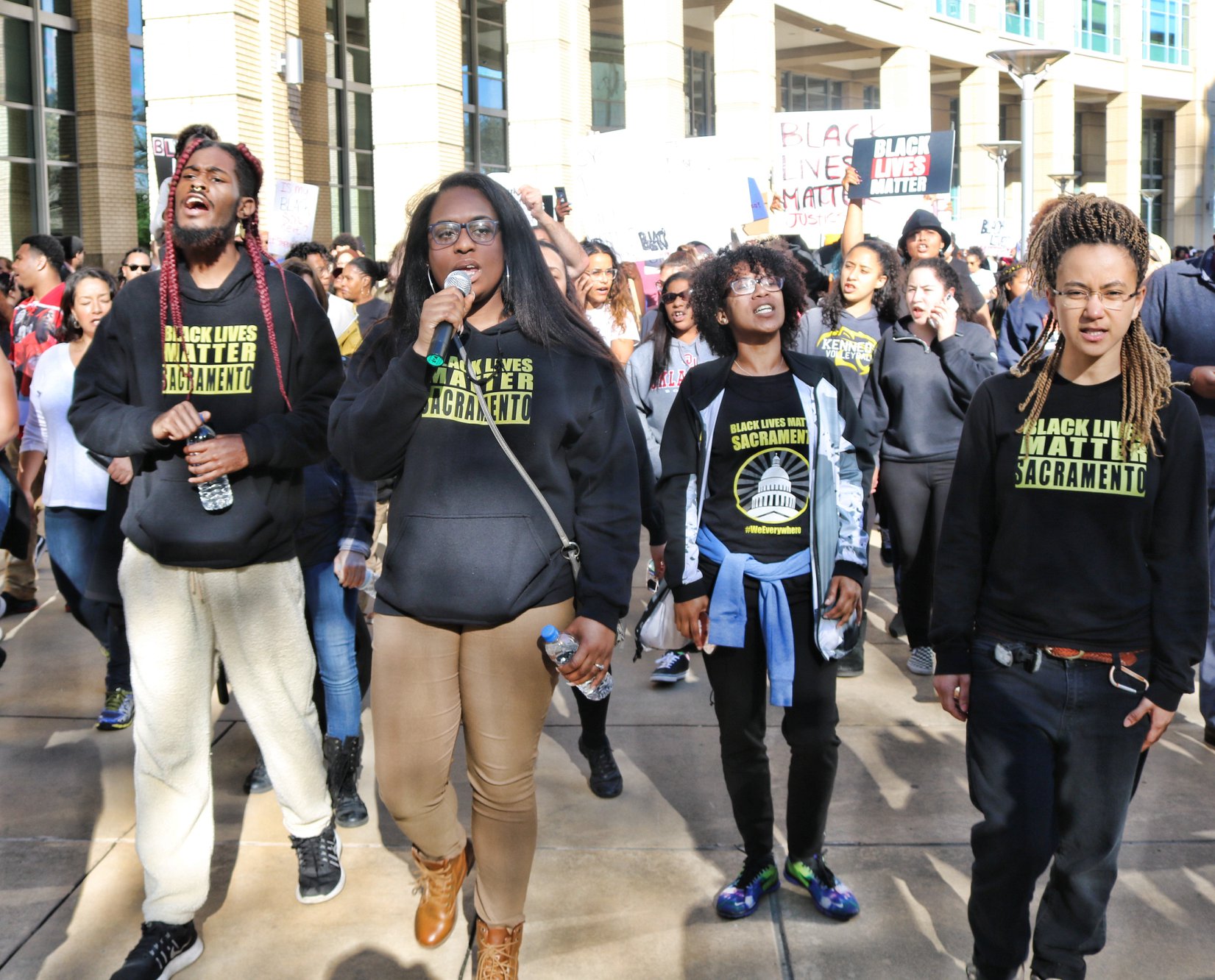 “Clark’s family has denied he had anything do with any break-ins. His grandmother said she heard commotion in her backyard and asked her husband to call police. But it turned out the police were already there, having just fatally shot Clark.”

“Videos of the encounter showed officers shouting “gun, gun, gun” before opening fire. But police said they found no weapon, just a cellphone belonging to Clark.”

“Sacramento police have refused to name the two officers who shot Clark, but they were identified by an area civil rights attorney who saw their names on unedited video captured by the body cameras they wore.”

“A Sacramento Bee article noted that one of the officers, who is African American, joined the department in 2016 after prior work with three other agencies.”