The “Beto” fever is spreading. The republican Texan Senator Ted Cruz would ordinarily be cruising to a victory in the upcoming November mid-term 2018 mid term elections in a conservative republican state where a democratic candidate has not won a statewide race in decades.

But there are the exceptions to any so called truths, and Beto O’Rourke who is challenging Senator Cruz for his US Senate seat as a democrat in November, may be setting the rules on fire.

On April 7, 2018, Frank Bruni of the New York Times penned the following commentary, “Watch Out, Ted Cruz. Beto is Coming.”

“Count me among the swelling ranks of the infatuated. I, too, have been Beto-struck.”

“I have seen the alternative to Ted Cruz — Lord knows we need an alternative to Ted Cruz — and he’s a peppy, rangy, toothy progressive with ratios of folksiness to urbanity and irreverence to earnestness that might well have been cooked up in some political laboratory. Could that formula enable Representative Beto O’Rourke, a Texas Democrat, to wrest Cruz’s seat in the Senate from him in November?”

“By now you’ve probably heard of Beto — seemingly no one calls him by his surname — and that in and of itself is a marvel. When else has a long-shot Senate candidate with no prior celebrity drawn so much coverage? He has been the subject of lengthy profiles in The Times, The Washington Post, Politico, Rolling Stone and Vanity Fair, which bestowed upon him the mightiest political adjective of them all: “Kennedyesque.”

“He even appeared last month on Bill Maher’s HBO show, generating headlines with his response to Maher’s characterization of Cruz.”

“It was a naughty swerve from his usual niceness, and over lunch in Houston on Thursday, he told me that he regretted it.”

“I think I was just moving the conversation along,” Beto said. “Anyhow, I don’t think that Ted Cruz is an asshole.”

“I certainly don’t think that publicly,” he answered.” “Cruz is a rare and precious gift. He’s so loathed that any passable Democrat with a picayune chance of toppling him was bound to draw more attention and inspire more hope than the political dynamics warranted. While President Trump’s unpopularity endangers his party’s incumbents far and wide and Texas may indeed be getting bluer, the state has been very red for very long. The last time a Democrat won statewide office was 24 years ago.”

“But Beto is more than passable. Many of his campaign events are mobbed. People line up for selfies and then insist on hugs.”

“He’s raising money like mad. Last week he disclosed that in the first quarter of 2018 he took in $6.7 million, bringing his total haul to $13.2 million, which handily outpaces Cruz and is more than any Texas Democrat running for the Senate ever amassed. All of that cash came from individuals. He has sworn off money from PACs.”

“Even the most skeptical person has to acknowledge that there’s something going on here,” Jim Henson, the director of the Texas Politics Project at the University of Texas at Austin, told me. “But is it something that can overcome the deep hole that any Democratic candidate in this state is in?”

“Beto’s answer to those odds is an oddball campaign. This has freed him to be freewheeling. He has no speechwriter, because he never speaks from a fixed script. He has no pollster, because he’s not going by polls.”

“No political consultant worth their salt would allow us to go to college campuses, because young people don’t vote,” he told a group of Latino leaders during a meeting on Thursday that I accompanied him to. “That’s why we don’t have a political consultant.”

“He was driving himself from stop to stop in a rented red Dodge Caravan. There was a banana and bag of nuts beside him; his two campaign aides — the entirety of his traveling entourage — huddled with their smartphones in the back. “Their highest value in the car is cranking on stuff,” he told me. The steering and navigation could be left to him.”

“His Facebook followers already know this, because he does Facebook Live streams of much of his day, recounting all manner of tedium.”

“On Thursday night, viewers beheld the action-packed minutes of him refueling the Caravan. “Our purchase came to $44.45,” he narrated. “Your contributions literally go into the gas tank.”

“In late January, he did a 24-hour Facebook Live beginning with a run with several hundred supporters at dawn and continuing through a chat with all-night street cleaners. (When he had to shower or such, his wife, Amy, kept viewers engaged.)”

“How do I get your attention?” he answered. “You’ve seen politics before. You’ve seen the well-produced ads where I’m holding my wife’s hand and our kids are running down a hillside. You’re sick of that. How do I honor what’s going on now? Politics are changing dramatically. People are really looking for the most transparent, honest, direct way to connect with one another. And we’re going to find it.”Beto, 45, lives in El Paso, grew up there and has spent most of his life in Texas, apart from college at Columbia University, where he majored in English. He and Amy have three children, ages 7, 9 and 11. He started a small technology company before he served on the El Paso City Council and then in Congress.” 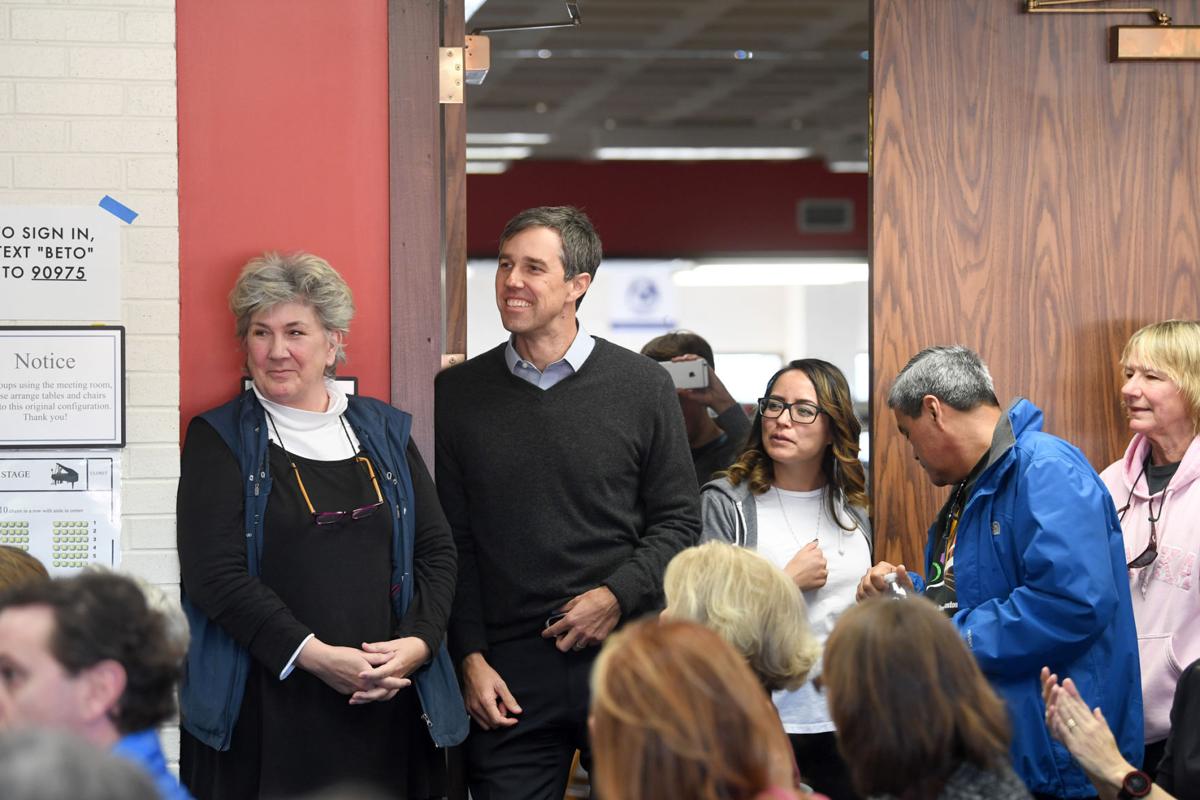 “That background has somehow given him enough material that whenever a voter asks him a question — about health care or school safety or the treatment of veterans — he’s able to draw on some personal anecdote. After a town hall meeting on Thursday, two of the attendees whom I interviewed separately used the same adjective to praise him: “Relatable.”

“He hits so many right notes that it’s eerie. During campaign swings last summer, when school was out, the family camped out at night in state parks. His two youngest kids learned all the words to George Strait’s “Amarillo by Morning” before an event in Amarillo, which they opened with an a cappella rendition.”

“He’s quick to validate voters’ ill will toward federal lawmakers, and he said, during that town hall, that only 9 percent of Americans approve of Congress. “You know that communism has an approval rating of 10 percent,” he added. “Chlamydia is at 8 percent. So Congress is in the sweet spot. But watch out! The chlamydia lobby is working it hard and they are going to move up and surpass Congress soon.”

“But he’s also careful to praise his colleagues in the House.”

“He talks about fried catfish one second, James Joyce the next. (The older of his two sons is named Ulysses.) He’s fluent in classic punk rock and contemporary country. He’s fluent in Spanish, too.”

“He’s clear about his beliefs that health care should be guaranteed, marijuana should be legal, Trump should be impeached and the border wall is ridiculous. That puts him to the left of many Texans. But he’s just as voluble about his exhausting effort to visit every county in Texas, including the most staunchly conservative ones, and about the need for people of all political stripes to be respected.” 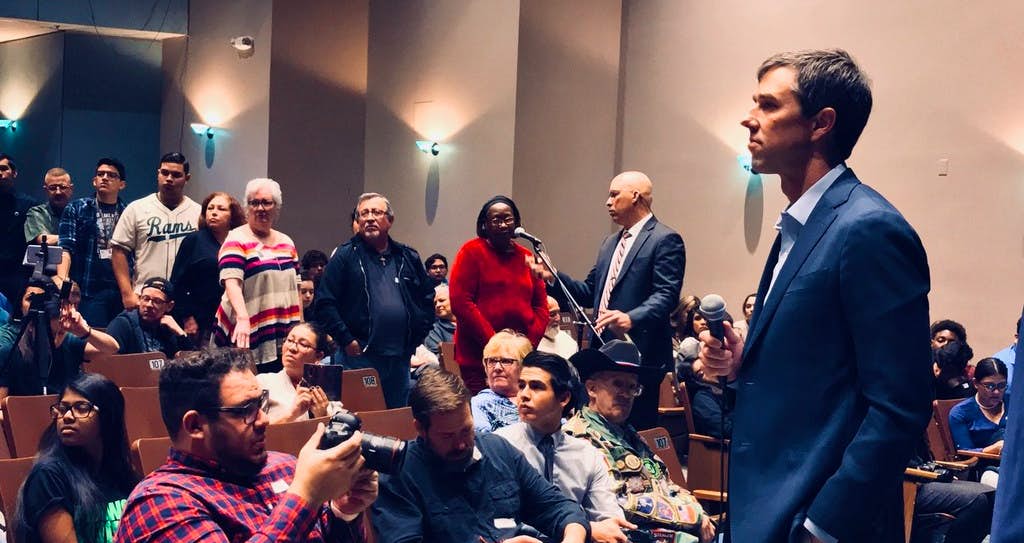 “Beto is more than the anti-Cruz. He’s a political fable, holding out the happy if far-fetched possibility that a candidate’s effervescence matters more than a state’s partisan breakdown and that gumption beats any focus group.”

“People are watching,” he told his town hall audience. “If we win this race in the right way, I guarantee you, it is going to change politics in the United States going forward.”