Most of us have figured out that the republican President Donald Trump cannot take a joke at his expense. This explains in part why he refuses to attend the annual  White House correspondents‘ dinner.

This Trumped-up dinner and accompanying comedy roast, with remarks by the President followed by a featured comedian, has become an annual standard, where those present mingle with actors, models, and other celebrities like Andrea Mitchell and Wolf Blitzer.

The president’s last attempt to deliver some funny lines at an October 2016 Al Smith Dinner, held annually, was a complete dud. His jokes were Don Rickles’ mean to where he was met with open jeers. As per the 4/28/17 New Yorker by Ian Crouch, we are reminded of the annual event in 2011 when the president did attend:

“The President may try to spin his strategic retreat as a minor victory, but it will be an empty one. If he were a Marvel superhero, or super-villain, a key point in Trump’s origin story would be the 2011 correspondents’ dinner, where President Obama’s lavish mockery of Trump’s political ambitions became, as the mythology now has it, the dark fuel for his eventual run for the Presidency. People in attendance noted Trump’s beet-red face, his locked jaw, his frozen slouch as Obama deftly skewered him, referring to him dismissively as “the Donald.” What greater thrill than to return triumphantly to the scene of his greatest public humiliation and deliver a few remarks from behind the Presidential seal? But even a night of gloating would require from Trump the kind of practical courage that he, until now, has failed to demonstrate. Instead, sensing a potential televised conflict, in which, for a time at least, he’d have to surrender the microphone to a hostile comedian, Trump ducked out, choosing instead to nurse his pride in the comfort of another campaign rally, playing to what comedians would call a friendly room.”

“Stormy Daniels and a staffer at the Harvard Lampoon allegedly have something in common: a threat from President Trump’s lawyer, Michael Cohen.”

“After pulling off an epic prank on then-candidate Trump during the summer of 2015, Tom Waddick, a Harvard senior and member of the historic comedy magazine (Harvard Lampoon), told 60 Minutes in an episode that aired Sunday (4/8/17) he ended up on the receiving end of a fiery call from Cohen.”

“It all started when the Lampoon broke into the offices of the Harvard Crimson and made off with the paper’s famed president’s chair. Staffers then reached out the nascent Trump campaign and—posing as the Crimson—offered the candidate the paper’s endorsement. Team Trump, Waddick said, was keen on the idea, so Lampoon staffers lugged the heavy president’s chair to Trump Tower in Manhattan. After a bit of chit chat, Trump posed for a thumbs-up photo with the group of students, whom he still thought represented the Crimson.”

“But a few days later, Waddick told 60 Minutes, the Trump campaign unraveled the prank. The team was less than thrilled with the Lampoon staffers, and Cohen made sure Waddick knew of his discontent.”

“He says, you know, ‘I’m gonna come up to Harvard. You’re all gonna get expelled. If this photo gets out you’ll be outta that school faster than you know it. I can be up there tomorrow,” Waddick told 60 Minutes.” 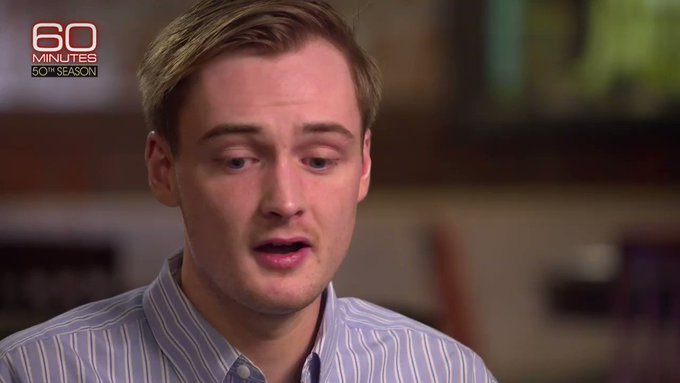 Occasionally the Lampoon pulls off an epic prank. Current senior Tom Waddick may have set a new standard by tricking candidate Donald Trump to sit in a chair stolen from student newspaper–and frequent target–The Harvard Crimson. The ruse? The Crimson endorsed Mr. Trump.

Twitter Ads info and privacy
“Cohen then asked Waddick to send over his Harvard ID, which he did, due to concerns that “he might actually be crazy enough to fly up” to Cambridge.”

“The Lampoon—which counts William Randolph Hearst, Conan O’Brien, and B.J. Novak among its alumni—published its fake Trump endorsement on the website thecrimson.co in July 2015, according to the Crimson, thumbs-up photo and all.”

As per a 4/9/18 Boston Globe report by  J.D. Capelouto, “When the Lampoon eventually published its fake endorsement in July 2015 to a Crimson parody site, thecrimson.co, it went viral for the clever ruse on both Trump and its on-campus rival. The parody site has since become unavailable.”

“Waddick also told “60 Minutes” what it was like taking the now-iconic Trump photo.”

“While we were there they had sort of hairspray and combed it over and stuff. And he said, ‘People don’t think my hair is real, but you can all testify this is very real.’” Waddick said. “. . . So he said, ‘Everyone do the thumbs up,’ so we’re all doing his sort of signature thumbs up around him. And I was just like, ‘We got it.’”

“The Crimson published a story about the Lampoon’s prank in August 2015, reporting that the prestigious student newspaper’s staff were unaware of the joke until Trump’s campaign reached out to talk about the piece — at which point the campaign was told the Crimson had not authorized any such editorial.”