Both Russia and Syrian government officials are denying that this chemical attack on civilians in the Douma area of Syria, even took place around the 7th in April 2018.

Meanwhile the US intelligence community will be collecting data regarding this reported attack.

On April 10, 2018, BBC published the following report,  “Syria war: What we know about Douma ‘chemical attack’ 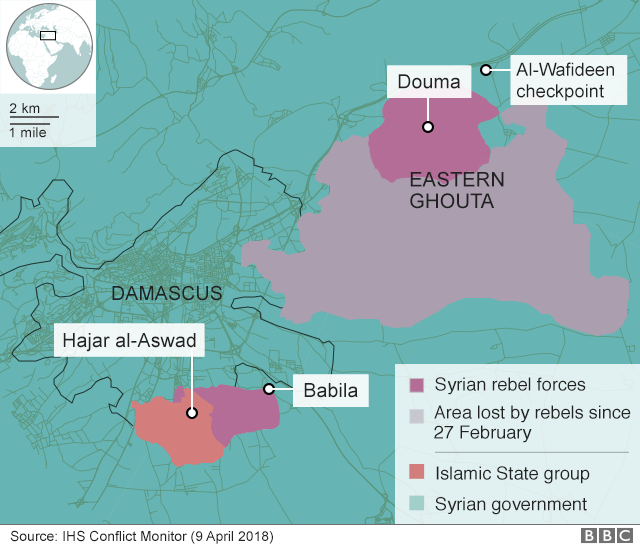 Why was Douma being bombed?

“In February, forces loyal to President Bashar al-Assad launched an assault on the Eastern Ghouta that has reportedly left more than 1,600 civilians dead.”

“In March, troops split the region into three pockets – the largest of which was around Douma, home to between 80,000 and 150,000 people. Facing defeat, rebel groups in the other two pockets agreed to be evacuated to northern Syria.”

“But the group controlling Douma, Jaysh al-Islam, continued to hold out. On Friday, after negotiations with the government stalled, air strikes resumed.”

What happened on Saturday?

“The bombardment continued on Saturday, with dozens of people reportedly killed or injured by conventional munitions before the suspected chemical attack.”

“The first occurred at approximately 16:00 (13:00 GMT) and saw a bakery on Omar Ibn Al-Khattab street in north-western Douma targeted, the VDC said.”

“We later discovered the bodies of people who had suffocated from toxic gases. They were in closed spaces, sheltering from the barrel bombs, which may have caused their quick death as no-one heard their screams,” he added.

“The VDC said the second incident took place not far to the east at approximately 19:30, when Martyrs’ Square was hit.”

“At 19:45, more than 500 patients – most of them women and children – were brought to medical facilities with symptoms indicative of exposure to a chemical agent, according to the Syria Civil Defence and the Syrian American Medical Society (SAMS), a relief organisation that supports hospitals.”

“People were treated for breathing difficulties and irritation of the eyes following the first, the UOSSM said. After the second, patients were brought to hospital smelling strongly of a chlorine-like substance and presenting symptoms that included cyanosis, foaming of the mouth, and cornea irritation, it added.”

“A medical student working at a hospital told the BBC he had treated a man who died. “His pupils were dilated and he had foam in his mouth. His heart was very slow. Then he coughed blood into his mouth as well,” he said.”

“Videos posted by the opposition activist group Douma Revolution showed what it said were the bodies of children, women and men found in the affected area. Some had foam coming out of their mouths and noses.”

How many people died?

The Syria Civil Defence and SAMS said rescue workers found 42 people dead in their homes. One person was declared dead on arrival at a hospital, and another six died while receiving treatment, they added. Rescuers were prevented from searching for more bodies by strong odours that caused breathing difficulties.

The UOSSM initially reported that 70 people were confirmed dead. On Monday, it revised down the figure to at least 42, but said it was expected to rise.

The Syrian Observatory for Human Rights, a UK-based monitoring group, said air strikes on Friday and Saturday killed almost 100 people. It said they included 21 who died as a result of suffocation, but that it was unable to identify the cause.

What could they have been exposed to?

On Monday, the Organisation for the Prohibition of Chemical Weapons (OPCW) said a fact-finding mission was “gathering further information from all available sources to establish whether chemical weapons were used”.

Experts say it is impossible to know whether a person has been exposed to a chemical agent from looking at a video or photo. The only way to confirm contamination is to take samples and analyse them in a laboratory. However, international humanitarian organisations have not been allowed to enter Douma since early March because of the government’s siege.

The Syria Civil Defence and SAMS believe those who died suffocated as a result of exposure to toxic chemicals, most likely an organophosphate – a compound grouping associated with pesticides and nerve agents.

The UOSSM also concluded that the symptoms of the casualties were consistent with exposure to a nerve agent, possibly one mixed with chlorine. Dr Raphal Pitti of UOSSM France said he thought “chlorine was used to conceal the use of [the nerve agent] Sarin”.

The United States, which supports the opposition to Mr Assad, said the victims’ symptoms appeared to be “consistent with an asphyxiation agent and of a nerve agent of some type”.

What does the Syrian government say?

The Syrian government, which has repeatedly denied ever using chemical weapons, accused rebels of “fabricating” the reports in a “failed attempt” to stop the government retaking Douma.

A foreign ministry source told the official Sana news agency: “Every time the Syrian Arab Army advances in its fight against terrorism, claims emerge of chemical weapons use.”

“Its permanent representative to the UN, Vassily Nebenzia, said on Monday that Russian military specialists had visited Douma and “confirmed that there were no chemical substances found on the ground, no dead bodies found, no poisoned people in the hospitals”.

“The doctors in Douma deny that there were people who came to the hospital claiming that they were under the chemical attack,” he added.”

“Mr Nebenzia said OPCW experts should fly to Syria immediately and “see for themselves what happened”, offering protection from Russian troops.”

How has the international community reacted?

“United Nations Secretary General António Guterres said he was outraged by the reports from Douma and warned that “any confirmed use of chemical weapons, by any party to the conflict and under any circumstances, is abhorrent and a clear violation of international law”.

“US President Donald Trump declared on Monday that there had been a “heinous attack on innocent Syrians with banned chemical weapons”.

“The UK and France said Saturday’s incident bore the hallmarks of previous chemical weapons attacks blamed on the Syrian government.”