aside US President Trump Was Indeed, A Very Randy Fellow/ A New Revelation 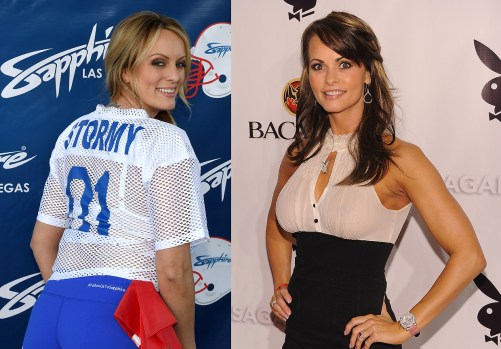 By now, those of us who keep up with the latest news, are aware of the 4/9/18 FBI raid on the offices, house and hotel room of the president’s personal attorney Michael Cohen with a “no knock” warrant which included the potential charges of campaign elections’ violations, wire and bank fraud.

There has been a lot of speculation being reported, that the FBI was looking to collect data pertaining as to how Mr. Cohen worked to keep quiet the adult film star Stormy Daniels who wanted to tell all about an affair she had with the president in 2006, while the president was married and his wife was pregnant. Ms. Daniels felt forced to sign a non-disclosure form (NDA) in return for her silence and a payment of about $130,000 dollars within a month of Mr. Trump becoming the 45th US president. Because according to Mr. Cohen, he acted without the president’s knowledge and because of the timing being very close to Mr. Trump becoming president, it is very possible that Mr. Cohen did not abide by current elections’ laws.

There is also the former playboy model, Karen McDougal who is seeking redress as well for how she was treated regarding an affair that she had with the president in 2006. In her case, she was promised some work with the National Enquirer in exchange for a contract payment of !50,000 and of course, her silence.

An interesting tidbit here, is that the both these paramours who did not know each other had the same attorney Keith M. Davidson who supposedly represented their interests. See:  The Insane Backstory Behind The Lawyer Who Shook Down Donald

Ms. McDougal may very well have been the victim of a tabloid practice termed, “catch and kill.”

As per Mr. Ronan Farrow’s reporting in The New Yorker “highlights a tactic called “catch and kill” — where a publication buys the rights to a story and then buries the story as a favor to someone.”

If I take the president’s personal attorney at his word, Michael Cohen has claimed to be not only the president’s attorney but the fixer of problems for the family. Then it is not too far-fetched to surmise that the president who does have a reputation for pursuing the ladies, that there may be a pattern as to how Mr. Cohen worked to insure the silence of women “who wanted to go public.

With this thinking in mind, numerous reporters are hot on the trail of stories of this nature.

Here is a new revelation…

“Eight months before the company that owns the National Enquirer paid $150,000 to a former Playboy model who claimed she’d had an affair with Donald Trump, the tabloid’s parent made a $30,000 payment to a less famous individual: a former doorman at one of Trump’s New York buildings.”

“As it did with the model, the Enquirer signed the ex-doorman to a contract that effectively prevented him from going public with a tale that might hurt Trump’s campaign for president.”

“The payout to Karen McDougal remained secret until the Wall Street Journal published a story days before the election. Curiosity about that deal has since spawned intense media coverage and, this week, helped prompt the FBI to raid the offices of Trump’s personal lawyer, Michael Cohen.”

“The story of the ex-doorman, Dino Sajudin, has not been told until now.”

“The Associated Press confirmed the details of the Enquirer’s payment through a review of a confidential contract and interviews with dozens of current and former employees of the Enquirer and its parent company, American Media Inc (AMI). Sajudin got $30,000 in exchange for signing over the rights, “in perpetuity,” to a rumor he’d heard about Trump’s sex life – that the president had fathered a child with an employee at Trump World Tower, a skyscraper he owns near the UN. The contract subjected Sajudin to a $1m penalty if he disclosed either the rumor or the terms of the deal to anyone.”

“The parallel between McDougal’s and the ex-doorman’s dealings with the Enquirer raises new questions about the roles that the Enquirer and Cohen may have played in protecting Trump’s image during the election. Prosecutors are investigating whether Cohen broke banking or campaign laws in connection with AMI’s payment to McDougal and a $130,000 payment to Stormy Daniels that Cohen said he paid out of his own pocket.”

“Cohen’s lawyer has called the raids “inappropriate and unnecessary.” AMI hasn’t said whether federal authorities have sought information from it, but said this week that it would “comply with any and all requests that do not jeopardize or violate its protected sources or materials pursuant to our first amendment rights.”

“On Wednesday, an Enquirer sister publication, RadarOnline, published details of the payment and the rumor that Sajudin was peddling. The website wrote that the Enquirer spent four weeks reporting the story but ultimately decided it was not true. The company only released Sajudin from his contract after the 2016 election amid inquiries from the Journal about the payment. The site noted that the AP was among a group of publications that had been investigating the ex-doorman’s tip.”

“Last summer, Dylan Howard, the Enquirer’s top editor, said he made the payment to secure the former Trump doorman’s exclusive cooperation because the tip, if true, would have sold “hundreds of thousands” of magazines. Ultimately, he said the information “lacked any credibility,” so he spiked the story on those merits.”
“Unfortunately Dino Sajudin is one fish that swam away,” Howard told RadarOnline on Wednesday.”

“But four longtime Enquirer staffers directly familiar with the episode challenged Howard’s version of events. They said they were ordered by top editors to stop pursuing the story before completing potentially promising threads.”

“They said the publication did not pursue standard Enquirer reporting practices, such as exhaustive stakeouts or tabloid tactics designed to prove paternity.”

“The woman at the center of the rumor about Trump denied emphatically to the AP last August that she’d ever had an affair with Trump, saying she had no idea the Enquirer had paid Sajudin and pursued his tip.”

“The AP has not been able to determine if the rumor is true and is not naming the woman.”

“This is all fake,” she said. “I think they lost their money.”

“The Enquirer staffers said the abrupt end to reporting combined with a seven-figure penalty to stop the tipster from talking to anyone led them to conclude that this was a so-called “catch and kill” – a tabloid practice in which a publication pays for a story to never run, either as a favor to the celebrity subject of the tip or as leverage over that person.”

“The company said that AMI’s publisher, David Pecker, an unabashed Trump supporter, had not coordinated its coverage with Trump associates or taken direction from Trump. It acknowledged discussing the former doorman’s tip with Trump’s representatives, which it described as “standard operating procedure in stories of this nature”.

Last summer, Howard said the company did not take editorial direction “from anyone outside AMI,” and said Trump has never been an Enquirer source. The company has said reader surveys dictate its coverage and that many of its customers are Trump supporters.” 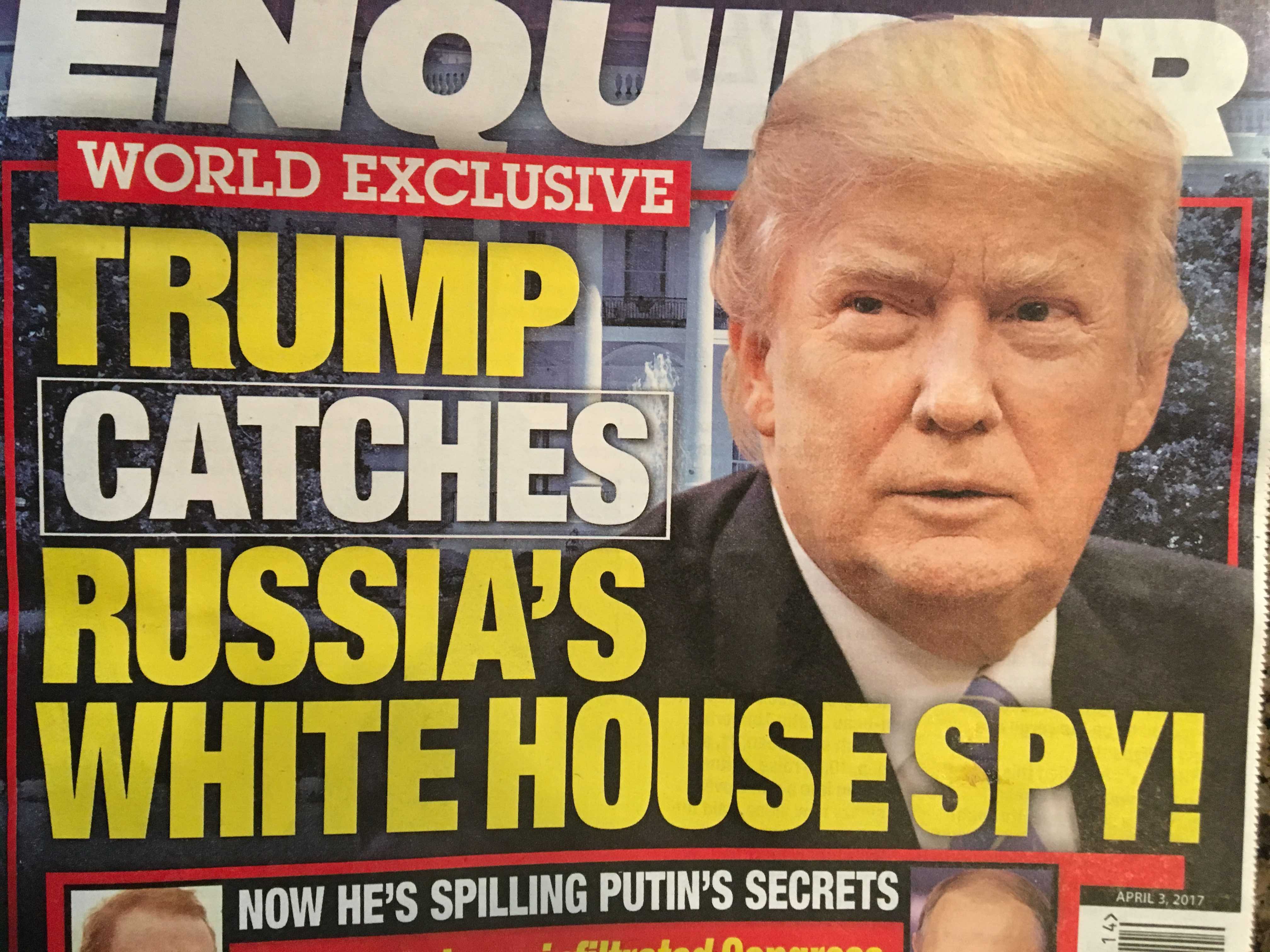 “The company has said it paid McDougal, the model, to be a columnist for an AMI-published fitness magazine, not to stay silent. McDougal has since said that she regrets signing the non-disclosure agreement and is currently suing to get out of it.”

George, the longtime former reporter and editor, said the $1m penalty in Sajudin’s agreement was larger than anything he had seen in his Enquirer career.”

“If your intent is to get a story from the source, there’s no upside to paying up front,” said George. Paying upfront was not the Enquirer’s usual practice because it would have been costly and endangered the source’s incentive to cooperate, he said.”

“After initially calling the Enquirer’s tip line, Sajudin signed a boilerplate contract with the Enquirer, agreeing to be an anonymous source and be paid upon publication. The Enquirer dispatched reporters to pursue the story both in New York and in California. The tabloid also sent a polygraph expert to administer a lie detection test to Sajudin in a hotel near his Pennsylvania home.” 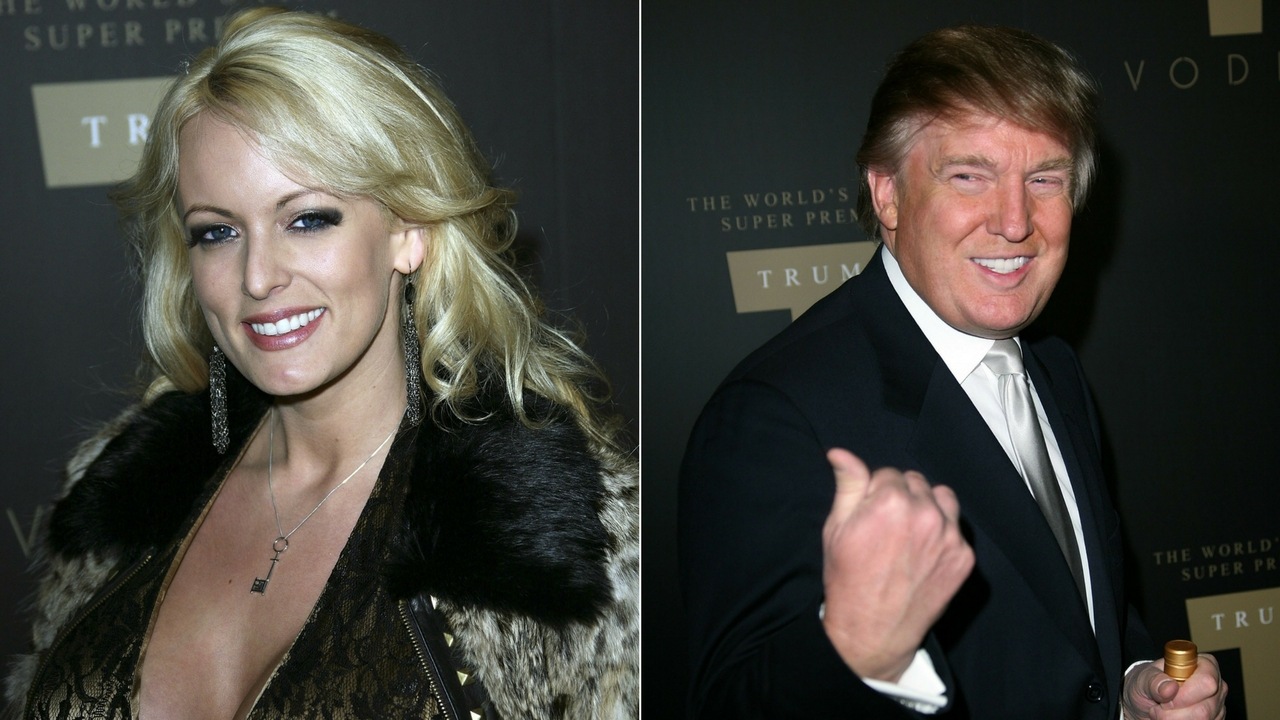 “Sajudin passed the polygraph, which tested how he learned of the rumor. One week later, Sajudin signed an amended agreement, this one paying him $30,000 immediately and subjecting him to the $1 million penalty if he shopped around his information.”

“The Enquirer immediately then stopped reporting, said the former staffers.”

“Sajudin confirmed he’d been paid to be the tabloid’s anonymous source but insisted he would sue the Enquirer if his name appeared in print. Pressed for more details about his tip and experience with the paper, Sajudin said he would talk only in exchange for payment.”

As per a 4/12/18 VOX report, “Sajudin’s allegation of a $30,000 payoff to kill the story, reported first by the New Yorker’s Ronan Farrow on Thursday, April 12, has since been corroborated in whole or in part by the Associated Press and the Washington Post. The Post’s Carol Leonnig spoke to Sajudin, who stood by his story and told her it “had to come out.”

“In a statement, he elaborated, “I was instructed not to criticize President Trump’s former housekeeper due to a prior relationship she had with President Trump which produced a child.”

NEW: Trump doorman Dino Sajudin releases statement: “I was instructed not to criticize President Trump’s former housekeeper due to a prior relationship she had with President Trump which produced a child.” (via @soniamoghe)

Twitter Ads info
“No outlet has confirmed that the underlying story here — that Trump had an affair with a housekeeper, and that this affair produced a child.”