aside Was The US Missile Attack On Syria’s Chemical Holding Sites Mostly Just For Show?

It bothered me that in the weeks prior to the US taking military action in Syria, the republican President Donald Trump repeatedly warned in tweets to the world that airstrikes were coming, despite knowing better as per his own words in the past, admonishing others not to announce publicly any future military tactics.

After April 14, 2018, if one watched or studied the Russian or Syrian new reports regarding the US ordered bombing in coordination with UK and French military forces against 3 targeted chemical sites in Syria in retaliation for the Syrian government having used chemical/ nerve gas on its citizens around the 7th of April 2018, the public would have been informed that the Syrian air defense systems were able to strike down most of the allied missiles that were dropped.

We here in the US were told that the US / UK/ France’s missile strikes had successfully reached its targets. There was no talk about the Syrian military deploying any of its defensive air weapons. It was a surprise for me to discover that according to the US Pentagon, Syria did nada regarding defensive manuevers until after the US with UK and France had completed its mission. 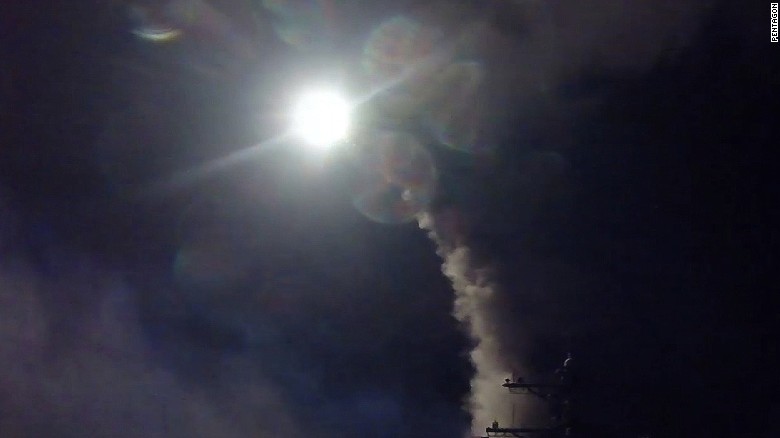 Then on Sunday, the 15th of April, the US Ambassador Nikki Haley at a United Nations’ gathering  went on the record stating that the US would be imposing additional sanctions against Russia to be announced on April 16, 2018. This action was meant to be a retaliatory measure against Russia for having been complicit in Syria’s attack with its brutal dictator President Bashar al-Assad in addition to having poisoned 2 Russian expats living in the UK.

But the president backed out of this plan. The president said he did not want to enact sanctions against Russia because it did not retaliate when the US bombed Syria, its ally.

Incidentally Russia was the only country which voted in the United Nations against an independent investigation being conducted in Syria regarding the chemicals used on April 7 in Douma, Syria. The group, (OPCW) Organisation for Prohibition of Chemical Weapons has been denied entry into Syria by Russia as of the 18th of April 2018 to do some testing.

At this point, I can’t help but wonder if this entire US military action was this just another reality show directed by the president.

The Russian/ Syrian version of US attack

A senior Russian military official has said that Syrian air defence had intercepted at least 71 cruise missiles fired by US, UK and French forces.

“At a news conference in Moscow on Saturday, Lieutenant General Sergey Rudskoy said at least 103 cruise missiles, including Tomahawks, were fired into a number of targets in Syria.”

“Russia has fully restored the air defence system of Syria, and it continues to improve it over the last six months,” Rudskoy said.” “The Russian defence ministry was quoted as saying that Syria deployed Russian-made surface-to-air missiles, including S-125, S-200, 2K12 Kub and Buk to repel the attacks.”

“Among those targeted by the US-led operation was the Al-Dumayr military airport outside of Damascus. Russia said all 12 missiles directed at the airport were intercepted.”

“In his statement, Rudskoy confirmed at least one US Navy warship in the Mediterranean and US B-1 bomber were involved in the operation, as well as UK Tornado fighters.”

“The US-led strikes on Saturday came after a suspected chemical weapons attack by the Syrian regime in the former rebel stronghold of Douma last week.”

“A statement from the Pentagon said that at least 58 missiles struck Syria’s Shayrat airbase. Reuters quoted a US official saying that Tomahawk missiles were used in the strikes.”

“French officials said its military had fired at least 12 missiles into Syria, and that they believe none of their missiles was intercepted.”

OPWC GROUP HAS NOT BEEN ABLE TO ENTER DOUMA SYRIA

As per April 18, 2018 Al Jazeera report, “Inspectors from the global chemical weapons watchdog have not been able to enter Syria’s Douma to examine the site of a suspected gas attack, the organisation said, dismissing an earlier report circulated by Syrian state-run media.”

“The Organisation for Prohibition of Chemical Weapons (OPCW) said on Wednesday (4/18/18) that United Nations security officials entered the town on Tuesday to survey the area where its fact-finding mission was supposed to probe allegations of a chemical weapons attack carried out by government forces on April 7.”

“But the UN Department of Safety and Security (UNDSS) team came under small arms fire, and an explosive device was detonated nearby during their stop at the second of the two sites that they visited, the OPCW said in a statement.”

“At the first site, the officials had to withdraw because a large crowd gathered there, raising security concerns. There were no injuries, and the UN team returned to Syria’s capital, Damascus.”

“The UNDSS will continue to work with the Syrian National Authority, the local Councils in Douma, and the Russian Military Police to review the security situation. At present, we do not know when the [Fact-Finding Mission] team can be deployed to Douma,” the statement said.”

“Such deployment would only be considered following approval by the UN security team, and provided the OPCW team can have unhindered access to the sites, it added.”

As of April 21, 2018, the New York Times was reporting that the OPCW group was granted entry into the Douma, Syria area to manage inspections and of course, Russia and Syria deny having anything to do with any delays.

“Trump spoke by phone with British Prime Minister Theresa May and French President Emmanuel Macron. They affirmed the joint airstrikes were successful and “necessary to deter Assad from any further use of chemical weapons,” the White House said.”

“In this case, every missile launched Saturday (4/14/18) struck its target and none was shot down by Syrian or Russian air defense systems, the Pentagon said. Nor were any attacking aircraft struck.”

“All of the coalition missiles were fired from warplanes or naval vessels in the Red Sea, Persian Gulf and eastern Mediterranean Sea, hundreds of miles from their targets and out of range of Syria’s antiaircraft batteries. The missile salvo hit almost simultaneously, within minutes of 4 a.m. local time, officials said.”

“The strategy of avoiding Syrian airspace and firing from multiple directions simultaneously was designed to confuse and overwhelm Syrian and Russian air defense systems.”

“Syria sent 40 air defense missiles streaking into the night sky, but only after all the U.S., French and British weapons had struck their targets, Marine Lt. Gen. Kenneth McKenzie Jr., director of the Pentagon’s Joint Staff, told reporters at the Pentagon.”

“It wasn’t yet clear whether Syria had preemptively trucked away any of its chemical weapons or production equipment from the three facilities targeted by the U.S. — one near Damascus and two around the city of Homs — after Trump repeatedly warned in tweets last week that airstrikes were coming.”

“But McKenzie said Syrian forces could not have moved all the equipment and precursor chemicals necessary to produce nerve gas and other weaponized chemical agents.”

“I believe that there was materiel and equipment associated with each of these sites that was not movable, and that’s what really sets them back,” he said. He said the installations that produced chlorine gas and sarin, a deadly nerve agent, were damaged or destroyed.

“The goal of the strikes was “to cripple Syria’s ability to use chemical weapons in the future,” Pentagon spokeswoman Dana White told reporters.”

“It was a deliberate decision to go to the storage facilities, to go to the research facilities,” she added. “We’re confident that we’ve significantly degraded his ability ever to use chemical weapons again.”

“The largest and most important target was the Barzeh Research and Development Center near Damascus. U.S. officials described it as a key part of the Syrian chemical and biological weapons program.”

“The center was leveled by 57 cruise missiles fired by U.S. warships and submarines, and 19 long-range air-to-ground attack missiles fired from Air Force B-1 bombers, officials said.”

“Before-and-after pictures released by the Pentagon show three buildings and a parking garage collapsed and in rubble.”

“They had three buildings there and a parking deck, and now they don’t,” McKenzie said.”

“Our initial assessment is that this target was completely destroyed,”McKenzie said.

“France targeted a nearby storage bunker where chemical and biological weapons were kept, hitting it with seven cruise missiles. McKenzie said the facility had been “successfully hit and sustained damage.”

“Pentagon officials worried that the airstrikes might lead to an accidental release of toxic chemical agents. But they said highly accurate Tomahawk missiles mitigated the danger by striking the facilities and incinerating or destroying the contents. There were no reports of poison gas leaks.”

“The coordinated attack was launched in retaliation for a suspected poison gas attack on April 7 that killed at least 43 people during a government-backed offensive on Duma, a rebel-held bastion near the Syrian capital. Government troops later captured the area.”

“Citing circumstantial evidence, the Trump administration argued that sarin, a banned nerve agent, was probably mixed with chlorine in the Douma attack, although it doesn’t have ironclad evidence that sarin was used.”

“A senior administration official, who briefed reporters on condition of anonymity, said high-resolution photographs of victims in Douma showed them choking and foaming at the mouth, with constricted pupils and convulsions — symptoms of chemical poisoning, likely sarin.”

“The official also said that U.S. intelligence had tracked Syrian military helicopters above Duma before the attack and that they had dropped so-called barrel bombs, which Assad’s forces have used in the past for chemical agents. Victims and medical personnel reported a strong smell of chlorine and other chemicals.”

“Analysts said the latest airstrikes, which used twice as many missiles, may stop Assad from using chemical weapons again.”

“These limited strikes may serve to deter future chemical weapons use, but assuming they don’t trigger escalation or a retaliation, they won’t dramatically alter the course of the conflict,” tweeted Emma Beals, a Beirut-based expert who has been monitoring the war.