Every now and then, I get to pondering how the republican President Donald Trump’s base of supporters listen to anything he says with no filter having to do with reality. No matter how outlandish the lie, his followers which include the 80% of White Evangelicals believe him absolutely despite the fact that it has been objectively reported by credible fact checking sources that the president lies frequently.

Recently, I was having a short conversation with a long-time friend who is one of these Evangelicals. It was after a long lovely day spent at Epcot enjoying its flower and gardening displays. We were both tired and somehow we made the mistake of discussing politics, a subject we normally avoid as we are polar opposites in our views. And she just let it rip. “The American peoples just refuse to give President Trump a fair viewing. The liberal press can’t give him credit for anything that he does, and they lie all the time. The president knows what he is doing in acting to improve all of our lives.” 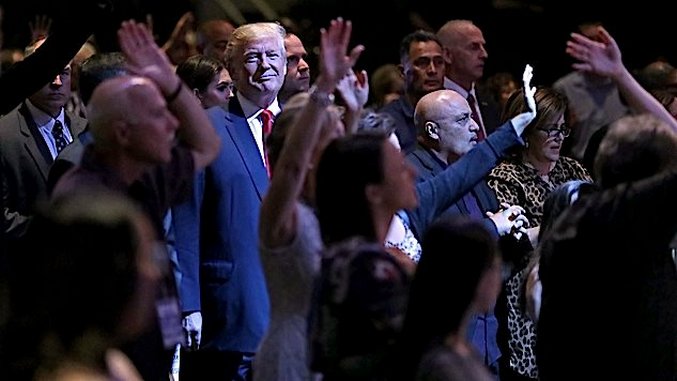 She ended her diatribe with the comment that she has a relationship with God and He is in agreement with her thinking. I foolishly countered that we must each talk to a different God because I didn’t perceive him thinking along the same lines. She indicated that I may want to pray to God about why I was hearing something different from her.

She went on to point out that she doesn’t believe in abortion. This is when I put on the brakes. My response was, that as a Democrat, I am also against abortions but I am also against legislation banning it because I know better. I lived through a time when this procedure was illegal but desperate women still availed themselves of abortions at great risk to their health. I proceeded to ask, why would she just assume that I was a pro-abortion advocate. This was the first time that she hesitated to answer me with the standard republican talking points.

The next morning I was dwelling on my discussion with my friend who I truly am fond of sans any political discussions. Despite how many would like to categorize her, she is genuinely a nice person.

For understanding the monolithic type thinker see: “This Is Water | The New Yorker”

In perusing the Twitter site, I came across a person who actually addressed this issue of abortion which reflects my way of thinking.

Here is what is posted on the Twitter feed of : @JesusChrist_GOP:

Confused because 1) Jesus is the biggest leftist in history, and yet 2) you vote Republican anyway because of abortions?

What if I told you that Democratic policies RESULT IN FEWER ACTUAL ABORTIONS than Republican ones??

The MAIN cause (95%) of abortions is unwanted pregnancies. These are all mainstream Dem policies.

Well, fuck you, first off. Secondly, these Democratic policies tend to RETURN more than they cost.

EDUCATION TOO! The more educated a woman is, the less likely she is to receive an abortion. Education has consistently been prioritized as an investment by Democrats while being treated as a bloated cost by Republicans.

Let’s not forget post-birth prospects. When education is expensive, minimum wages are low, insurance deductibles for birth and early childhood are sky-high, maternity leave is limited, and daycare is not affordable, women are (surprise!) not as likely to carry to term.

Democrats prioritize fixing these issues. Republicans, not so much. Given all these differences, it’s little wonder that ACUTAL abortion rates tend to drop during Democratic presidencies while staying stagnant during Republican terms. Chart below. “BUT JESUS, what about the holy grail of anti-abortion efforts? If we vote for enough Republicans for long enough, we can stock the Supreme Court with enough conservatives to overturn Roe v. Wade!” Glad you asked.

Putting aside all the other horrible collateral consequences that come from a jurisprudence that deems corporations to be people and money to be speech, suppose Roe is overturned. What happens?

The issue of abortion gets kicked to the states! It doesn’t just become illegal everywhere. Each state gets to make its own choice. If your state outlaws abortions, but your neighboring state doesn’t… then a car just beat your Court.

Also, many women will turn to illegal abortions, just as they have before when abortions have been outlawed. The coat hangers, the poisons, etc. Super nasty stuff.

And on this point, seems like a good time for a spoiler: women do not tend to enjoy getting abortions. They don’t get them for fun. They get them for necessity. And for that reason, they will continue getting them, whether legal (and safe) or illegal (and not).

“BUT JESUS, I don’t care that Democratic policies result in fewer actual abortions. It’s a morality issue. Anybody who can turn their head away from the ending of a potential life is no better than a murderer to me.” For you, I encourage a thought experiment:

Suppose you’re driving a runaway train. Brakes are gone, there’s a fork coming up, and you have to choose between hitting one of the following two options: 1) A crate marked “1,000 frozen, viable zygotes”; or 2) A single, live, crying human baby. Which way do you steer?

Even if you chose to hit the live baby, you still have to be able to recognize that other reasonable, moral people could choose the crate. And that’s just one example of why the “potential life” thing is so tricky.

Is a woman who has a period every month a murderer by virtue of existing? Do the socks of teenage boys sometimes double as genocide scenes? Hell, even when a zygote is actually created through intercourse, about ~199,999,999 other potential lives are lost in the process.

Also, about 2% of pregnancies (intended or not) end up ectopic, meaning that implantation occurs in the fallopian tubes. These zygotes are not viable. They will never become live babies. But, for a while, they can grow. And if they grow enough, they can burst the tubes.

About 10% of childbearing-related deaths each year stem from these burst fallopian tubes. A safe, widely available pill can enable the zygote (which is 100% doomed anyway) to harmlessly detach before growing too large. But taking this pill is still considered an abortion.

For women trying to have a baby, it can be devastating enough to learn that your pregnancy is ectopic and will never result in a child. How do these women feel when they are forced to go through waiting periods and watch videos about how special their baby could have been?

How do these women feel when they have to drag the process out, traveling to multiple facilities over multiple days just to get a safe, effective, widely-available pill? What about the health of these women, which is put at greater risk each day that they wait?

Quick addendum: Note the Bible itself does not treat fetuses as people. Per Moses, if a person kills a fetus, even WITHOUT THE PARENTS’ CONSENT, “the offender must be fined.” Ex. 21:22.

22( If men strive, and hurt a woman with child, so that her fruit depart from her, and yet no mischief follow: he shall be surely punished, according as the woman’s husband will lay upon him; and he shall pay as the judges determine.

In short, if you hate facts, then keep on keepin’ on.

But if you truly HATE abortions, then the moral, Christian, economically responsible, fact-based thing to do is simple:

John Pavlovitz, “White Evangelicals, This is Why People Are Through With You” (John Pavlovitz, who pastors North Raleigh Community Church in North Carolina, writes a heartfelt letter to white evangelicals.