UPDATE: On the 8th of May 2018, Don Blankenship was forced to concede his election bid to the State Attorney General Patrick Morrisey who won the primary vote to be the republican candidate vying for West Virginia’s US senate seat in November 2018. He will be challenging the incumbent democratic candidate, Senator Joe Manchin.

The Republican Party was in a pickle. The Republican National Convention (RNC) officials were fearful that a man from West Virginia who claims to be Trumpier than the republican President Donald Trump would win in the primary election being held on the 8th of May 2018 to become the republican candidate for the US Senate.

The democratic party can reach its goal to become the majority party of the US Senate in November 2018 by a slim margin, but it cannot afford to lose even one currently held senate seat.

President Trump had come out at the last minute to oppose on (5/7/18) his winning which is quite the statement as he had supported an alleged pedophile in the State of Alabama, Judge Roy Moore in his bid for its vacant US senate seat.

Don Blankenship was the former chief executive of Massey Energy who  served a year of prison time for not following mine safety rules where his negligence caused the death of 29 miners in 2010. Even with this background, there is a very good chance that he may win his bid to be the republican candidate. 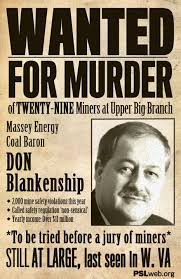 He is also a racist who has taken pot shots of peoples of China. This has becomes an issue because the the US Senate’s Majority Leader Mitch McConnell’s accomplished wife is of Chinese descent. Why did the GOP in the US Congress think that its support for a president with a history of racism wouldn’t eventually hit home?

The GOP is hoping that the president’s last minute intervention will stop Mr. Blankenship from succeeding in his bid to become the republican candidate for the US Senate seat in West Virginia.

On  May 7, 2018, Jonathan Martin of the New York Times penned the following report, “Trump Weighs In on West Virginia Senate Race in Sign of Republican Anxiety”

“President Trump intervened Monday in the West Virginia Republican Senate primary, pleading with voters a day before the election to oppose the former mine operator Don Blankenship, and signaling Republican anxiety over the prospect of forfeiting yet another red-state Senate race.”

“Mr. Trump’s decision to speak out came after Senator Mitch McConnell of Kentucky, whom Mr. Blankenship has targeted with deeply personal attacks against his wife’s ethnicity, urged the president to weigh in against Mr. Blankenship’s candidacy, according to Republican officials familiar with the conversation.”

“Mr. Trump quickly agreed, suggesting in a tweet that a victory by Mr. Blankenship would lead to a reprise of the embarrassing loss Roy S. Moore suffered last year in Alabama.”

“Mr. Trump warned that if Mr. Blankenship prevails in the primary it would all but ensure the re-election of the incumbent, Joe Manchin III, whom Republicans view as one of the most vulnerable Senate Democrats. Mr. Blankenship, the former chief executive of Massey Energy, served a year in federal prison after being convicted of conspiring to violate mine safety rules in connection with the Upper Big Branch mining disaster in 2010 that claimed 29 lives.”

“The tweet on Monday was a political gift to Representative Evan Jenkins and Attorney General Patrick Morrisey, Mr. Blankenship’s two Republican rivals, in a state Mr. Trump won overwhelmingly in 2016 and where he remains popular.”

”President Trump just announced this morning his support for Evan Jenkins,” a Jenkins robocall declared, taking some liberties with the president’s tweet, which did not favor him over Mr. Morrisey. The recording began with the phrase “This is a Trump voter alert” as it sought to further align Mr. Jenkins with the president.”

“That Mr. Trump would step into the contest at all underscores how alarmed party officials are about the prospects of a Blankenship victory.”

“The president has felt burned by Republicans when he injected himself into other races only to see his preferred candidates fall short. A victory by Mr. Blankenship would be highly embarrassing to Mr. Trump, coming on the heels of his inability to lift party nominees in Pennsylvania this year and in Alabama in December.”

“But the race may be close enough that Mr. Trump’s last-minute intervention proves enough to derail Mr. Blankenship, a power play that would only underscore his clout with the party base.”