The following is my opinion only. Qatar had assigned its former  ambassador to the USA, Ahmed al Rumahi, as a director for $ 100 billion dollar portfolio in 2016. There is already suspicion that monies in the form of a bribe may have already exchanged hands between a Qatari official and the president’s national security advisor in transition, General Mike Flynn. This has not been proven but there is a court document referencing the following December 2016 conversation, “In response, Kwatinetz (of Qatar) claims, “Al-Rumaihi laughed and then stated to me that I shouldn’t be naive, that so many Washington politicians take our money, and stated ‘do you think Flynn turned down our money?’ 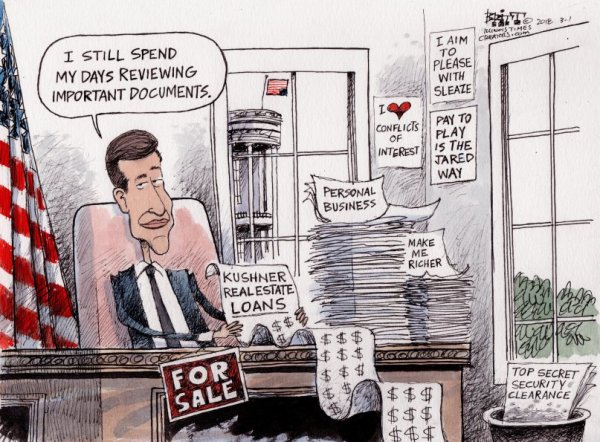 For some reason, it appears that Jared Kushner was erroneously led to believe that Qatari officials would be of a mind set to help with his father’s request for a loan to unload a financial albatross of a building at 666 Fifth Avenue that he had purchased at an overly inflated price in 2007 before the real estate bust. Qatar decided to not help him. But it seems that for awhile, the president’s son-in-law and senior advisor had the last word as detailed in the below narrative.

There is the appearance that there is a billboard sign on the White House, advertising that foreign policy decisions are for sale to more generous foreign donors like UAE, Saudi Arabia, and Israel.

Examples: As per the 3/2/18 Intercept report, “The New York Times reported last month that just prior to Jared Kushner’s visit to Israel and Saudi Arabia in May 2017, his family real estate company “received a roughly $30 million investment from Menora Mivtachim,” described as one of Israel’s largest financial institutions.”

Qatar recently (1/17/18) bought a $6.5 million apartment in Trump World Tower in New York City. The purchase means that the Middle Eastern state now owns four units in the building, for which it paid $16.5m.

“In reality, the Saudis’ primary aim was to punish Doha for asserting its independence from Riyadh by, among other things, engaging with Iran and abetting Al Jazeera’s journalism. This was obvious to anyone familiar with the Saudis’ own affinity for (shamelessly) exporting jihadism — which is to say, anyone with a rudimentary understanding of Middle East politics.”

“And it was equally obvious that the US had nothing to gain from a conflict between its Gulf allies. Qatar hosts one of America’s largest and most strategically important air bases in the Middle East. Any development that pushes Doha away from Riyadh pulls it toward Tehran. Thus, Secretary of State Rex Tillerson — and virtually every other arm of the U.S. government — scrambled to nip the blockade in the bud.”

“But Jared Kushner was (reportedly) an exception. Donald Trump was more than happy to endorse the idea that his speech had moved mountains, and commended the Saudis for punishing Qatar — first on Twitter, and then during a press conference in the Rose Garden. According to contemporary reports, his son-in-law was one of the only White House advisers to approve of this stance.”

“Regardless, the senior White House adviser is adamant that there was no relationship whatsoever between his family’s business dealings and the administration’s policy. “It is fantasy and part of a misinformation campaign for anyone to say or any media to report that Mr. Kushner took any action with respect to Qatar or any other country based on whether anyone in that country did or did not do business with his former company from which he disengaged before coming into the government,” Peter Mirijanian, a spokesperson for Mr. Kushner’s attorney, Abbe Lowell, said in a statement.”

“The government of Qatar, however, suspects otherwise. As NBC News reports:”

“Qatari government officials visiting the U.S. in late January and early February considered turning over to Mueller what they believe is evidence of efforts by their country’s Persian Gulf neighbors in coordination with Kushner to hurt their country, four people familiar with the matter said. The Qatari officials decided against cooperating with Mueller for now out of fear it would further strain the country’s relations with the White House, these people said.”

“It’s worth noting that the project the Qatari foreign minister refused to finance wasn’t just one more item in the Kushner family’s portfolio; it was Jared’s baby — his misbegotten, sickly, drowning baby.” 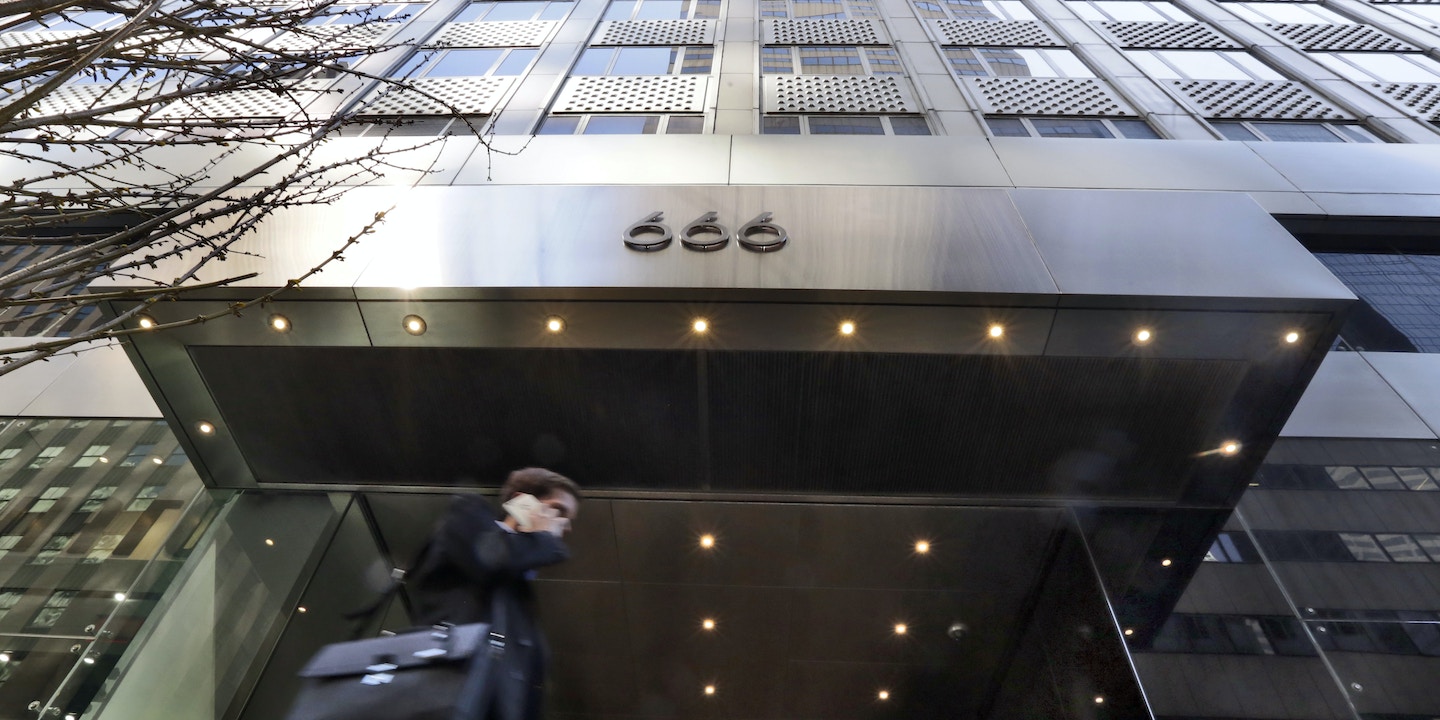 “In 2007, Jared Kushner decided that the real-estate market had nowhere to go but up. And so the 26-year-old mogul decided to plow $500 million of his family’s money — and $1.3 billion in borrowed capital — into purchasing 666 Fifth Avenue for twice the price it had previously sold for. Even if we’d somehow avoided a global financial crisis, this would have been a bad bet: Before the crash, when the building was almost fully occupied, it generated only about two-thirds of the revenue the Kushners needed to keep up with their debt payments.”

“After the crisis, however, things got really hairy. The Kushners were forced to sell off the building’s retail space to pay their non-mortgage debt on the building — and then to hand over nearly half of the office space to Vornado as part of a refinancing agreement with the real-estate giant.” 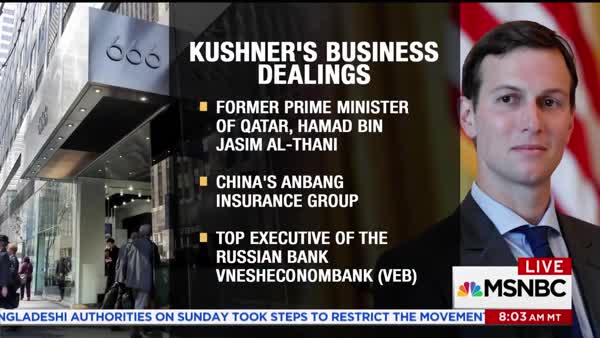 “The office space that the Kushners retained is worth less than its $1.2 billion mortgage — which is due early in 2019. If their company can’t find some new scheme for refinancing and redeveloping the property by then, Kushner will have cost his family a fortune.”

“Jared really doesn’t want that to happen. In the months between his father-in-law’s election and inauguration, Kushner divided his time between organizing the transition, and seeking capital from (suddenly quite interested) investors aligned with foreign governments: During that period, Kushner attempted to secure a $400 million loan from the Chinese insurance firm Anbang, and a $500 million one from former Qatari prime minister and billionaire investor Sheikh Hamad bin Jassim al-Thani, also known as “HBJ.” Anbang pulled out once the deal attracted critical media scrutiny, and HBJ jumped ship when the Kushners failed to find a second major source of capital.” 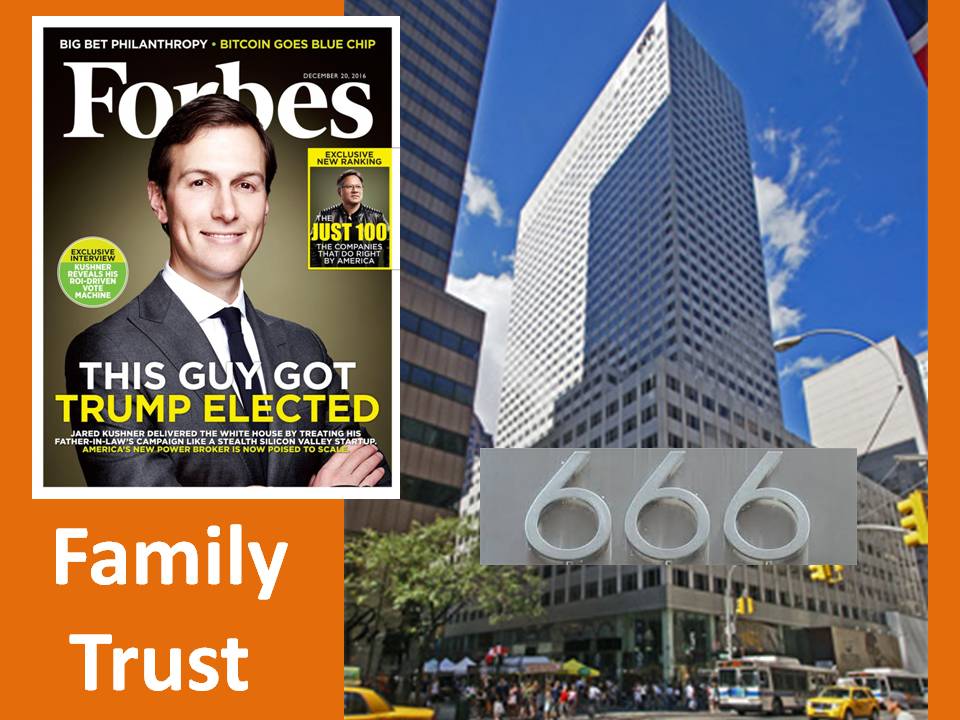 “In those same weeks, Kushner met with Sergey Gorkov, head of the Kremlin-affiliated Vnesheconombank. The senior White House adviser has insisted that this meeting was strictly political; Gorkov maintains it was strictly business.”

“They have also, apparently, been studied by top government officials in the United Arab Emirates, China, Israel, and Mexico — all of whom have privately discussed strategies for exploiting Jared Kushner’s business interests for geopolitical gain, according to a report from the Washington Post on Wednesday.”

“And if America’s allies and adversaries are looking for further (circumstantial) evidence that U.S. foreign policy might be for sale, the New York Times provided some this week, when it revealed that Kushner’s family company had won $500 million in financing last year from a pair of American firms right after their top executives had White House meetings with one Jared Kushner.”

Even if this is appearance is deceiving, why isn’t the mere semblance of such high corruption enough to bounce Kushner from the White House? Are Kushner’s personal skills really more valuable than his conflicts of interest are toxic? Is a real-estate heir who has no policy-making experience, background in geopolitics, or security clearance— but does have significant business interests in Israel — really such an ideal choice for brokering peace in the Middle East?

As per a 4/11/18 AP report by Josh Lederman, “There have been other signs that Trump is warming to the Qataris. The day before the emir’s visit, the administration told Congress it plans to approve a deal to sell $300 million in “Advanced Precision Kill Weapon Systems” to Qatar, including 5,000 high-explosive warheads and the same number of rocket motors. The U.S. Defense Security Cooperation Agency said that the laser-guided rockets would help Qatar modernize its military and wouldn’t alter the basic military balance in the region.”

It looks like Qatar has learned how to constructively do business with this administration.