To my mind, the recent presidential decision to move the US embassy from Tel Aviv to Jerusalem is counter to US national security interests and in my mind, also counter to Israel’s best interests. There’s a reason past presidents of both parties hesitated to take this step.

The US can no longer be objectively viewed as honest peace brokers in being backers of a two-state solution for Israel and Palestine and the hard right Israeli leader Benjamin Netanyahu never has been. Any hope for a peace agreement now is no longer even on life support.

The US president was not practicing the Art of the Deal unless one considers him successful if all he was doing consists of lining his pockets while pleasing his Evangelical base of voters. He gave away the biggest carrot/ prime real estate in Israel away for nothing of significance in return.

According to Thomas Friedman, President Trump could have talked the Israeli leader into ending any further Israeli settlements in disputed areas which would have given something to sell to the Palestinian leaders and Arab leaders throughout the middle east.

On May 14, 2018, the world viewed a split screen of the country club joviality as there was a celebration of the interim US embassy in Jerusalem being open for business against the backdrop pf Palestinians protesting in the Gaza strip with tennis rackets as weapons as Israeli snipers reigned bullets into the crowd killing at least 60 and wounding thousands. This was totally predictable and avoidable, had the US and Israeli leaders gave a damn. 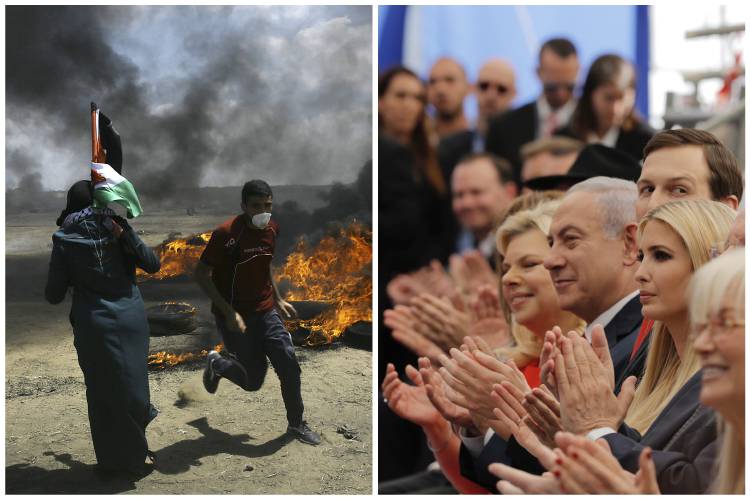 We heard the president’s administration talking point, that the protesters are being prompted by Hamas which may even be true, in part. But overall, I’m not buying it. There is such a concept as a proportional response to a peoples protesting without the ability to do harm beyond throwing rocks and yelling epithets.

It is my opinion that major decisions regarding Israel by the president’s administration have been based on his desire to please Israel, US donors who back all Israeli causes, and mostly his White Evangelical base who are very pro-Israel. By now, most Americans have figured out that the republican President Donald Trump’s hatred for any agreement established by the former democratic President Barack Obama has been a primary concern for him to where he has been refusing to listen to all the experts and our allies regarding recent steps that the president has taken regarding Israel. I do not predict any good coming as a result of the president recent actions.

The 1st policy decision made which went against both interests in my mind started with Jared Kushner telling General Mike Flynn during the transition period to have Russia abstain from voting on a United Nations resolution pertaining to Israeli settlements.

As per Times Of Israel:

Around December 21, 2016: The government of Egypt submitted a resolution to the UN Security Council on the issue of Israeli settlements. the vote was planned for the next day.

December 23, 2016: Kislyak tells Flynn that Russia would not vote against the resolution if it came to a vote.

This started the ball rolling where General Flynn got into trouble for lying about his actions during the transition time frame.

Then came the decision to move the US embassy from Tel Aviv to Jerusalem. Although the US recognizes Jerusalem as the capital of Israel, the US had taken this stance of not relocating the US embassy until after a peace settlement had been negotiated between Israel and Palestine. The US had wanted to be an independent peace broker and we were pro a 2 member state. So since 1995, every 6 months the US president signed a 6 month’s waiver to delay this relocation. The US recognized that this would not happen under the hard right Israeli leader, Benjamin Netanyahu who has demonstrated an iota of desire to work out a peace deal between Israel and Palestine. Originally, the president was following in the steps of his predecessors.

And this is where I suspect that pressure from Sheldon Adelson with his millions of dollars in donations to GOP causes, stepped in, as he voiced his displeasure that the president was not acting pronto to relocate the US embassy.

The president had delayed backing out of the Iran nuclear deal. I am convinced that were it not for pressure from Israel, that he might have listened to all the the foreign policy experts who advised against this. Sheldon Adelson wanted General H.R. McMaster gone and he is ok with John Bolton. This is where US national security interests have been seriously placed  at risk.

Sheldon Adelson/ Safra Catz are Jewsih republicans who have been very financially supportive of the US House Intel Committee chair Rep. Devin Nunes who has been leading the attacks against the US rule of law, the FBI, and DOJ to tarnish these institutions’ reputations.

The House Speaker has been backing Devin Nunes. It doesn’t hurt that Sheldon Adelson just cut a $30 million dollar check to help House republicans with their reelection campaigns.

Israel will do just about anything to keep President Trump in power. In my mind, this is definitely not in the best interests of US national security.

I love Israel but I love the US more as this is my country.

One of the major reasons for the president having taken these stances has to do with his catering to his base which includes the White Evangelicals which comprise 35% of his base. This explains the controversial Evangelical preachers presence at the US embassy opening ceremonies in Jerusalem on the 14th of May 2018.

Pastor John Hagee, the founder of Christians United for Israel, delivered the benediction at the ceremony. Another controversial evangelical pastor, Robert Jeffress, said a prayer at the embassy opening.

On May 14, 2018, Phillip Bump of Washington Post penned the following report, “Half of evangelicals support Israel because they believe it is important for fulfilling end-times prophecy”

“Well before he was asked to offer a prayer at Monday’s ceremony marking the U.S. Embassy’s move from Tel Aviv to Jerusalem, earning the enmity of Mitt Romney, Pastor Robert Jeffress offered tangential insight into why he and many evangelicals think the move was so important.”

“Jerusalem has been the object of the affection of both Jews and Christians down through history and the touchstone of prophecy,” Jeffress told CNN last year. “But, most importantly, God gave Jerusalem — and the rest of the Holy Land — to the Jewish people.”

“The latter half of that quote hints at the deep religious meaning of the existence of Israel for Jeffress and other Christians. As University of North Texas professor Elizabeth Oldmixon told Vox last year, the issue of recognizing Jerusalem is inextricable from that belief.”

“Polling bolsters Oldmixon’s explanation. In December, LifeWay Research conducted a poll evaluating the views of evangelical Americans on issues related to Israel and the politics of the Middle East. (The definition used to identify evangelicals, we’ll note, was more specific than most polls necessitate.) Among the questions was one about the biblical promise of the Holy Land to Abraham and his descendants. Two-thirds of respondents strongly agreed that the promise was an eternal one from God.”

“But it’s also worth picking out another part of what Jeffress said to CNN. Jerusalem, he said, is “the touchstone of prophecy.” That prophecy is the biblical prophecy of the return of Jesus Christ and the beginning of the Rapture — the end times.”

“What kick-starts the end times into motion is Israel’s political boundaries being reestablished to what God promised the Israelites according to the Bible,” Pastor Nate Pyle told Newsweek in January.”

“The LifeWays poll found that 80 percent of evangelicals believed that the creation of Israel in 1948 was a fulfillment of biblical prophecy that would bring about Christ’s return.”

“That meshes with a poll conducted by the Pew Research Center in 2003. Pew askedrespondents whether the existence of Israel fulfilled biblical prophecy. About a third of Americans said it did — while more than 6 in 10 evangelicals agreed. (So did more than half of black respondents.)” “The LifeWays poll also asked evangelical respondents what factors contribute to their support for the state of Israel. More than 6 in 10 cited God’s pledge to Abraham. The third-most-cited reason was that the existence of Israel was necessary for fulfilling prophecy. More than half of evangelicals said that was a reason they supported Israel’s existence.” “Sixty percent of those age 65 and older said the fulfillment of prophecy was an important factor in their support for Israel. In a follow-up question, 12 percent of respondents said the fulfillment of prophecy was the most important reason they supported the state of Israel. A third pointed to the promise made to Abraham. (Forty-five percent of poll respondents said the Bible was the biggest influence on their views about Israel — 11 times as many people as those who said that their church was the biggest influence.)”

“A great deal of attention has understandably been paid to the fact that evangelical support for President Trump has been robust despite Trump not meeting the personal moral standards one might expect from someone with strong religious support. The LifeWays poll makes clear that part of it is simply that evangelicals skew so heavily conservative.” “(In September 2016, Pew found that more than a third of evangelicals said their support for Trump in the 2016 election was based mostly on his not being Hillary Clinton.)”

“While Trump’s conservative politics (and deeply religious vice president) have led to concrete gains in other areas of importance to evangelicals, his support for Israel and for the move of the embassy has been an important factor as well.” 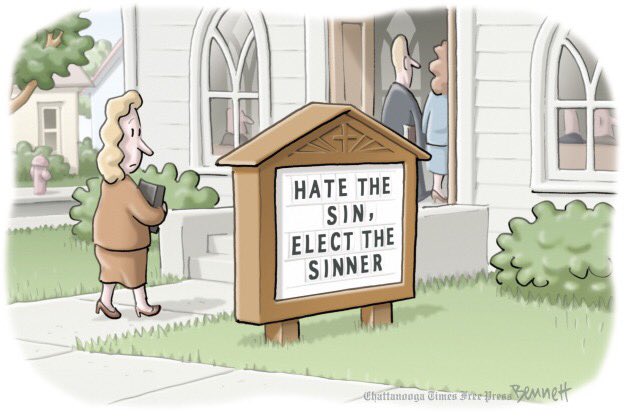 “At this point, Trump’s decision to recognize Jerusalem as the capital of Israel is the only concrete thing that his evangelical supporters can point to as part of fulfilling biblical prophecy to bring about the second coming of Christ,” religion historian Neil Young told Newsweek in January.”

See: In Gaza Strip protests, the anger has many targets – Los Angeles Times

See: What is Hamas? – Everything you need to know about Israel-Palestine -VOX…