aside Trump GOP Cronies Eat One Of Their Own, Rep. Trey Gowdy For Daring To Stand Up For “Rule Of Law”

For months now I have been hearing reputable reporters stating that many republicans in the US Congress will voice a lot critical remarks about their standard bearer, President Donald Trump, but their comments are always off the record. They are afraid of angering the president’s base as they need these voters to win elections.

It has become common knowledge that only some of those who are retiring or not returning to the US Congress for whatever reasons, have been vocal about criticizing the president’s actions.

One example of this, is the republican South Carolinian, Rep. Trey Gowdy who has dared to stand up for the “rule of law,” whereupon the president and his GOP cronies have been piling up to viciously attack this retiring representative who is a former prosecutor.

If this is what happens to a retiring lawmaker, imagine what would happen to those planning to stay in office who would dare to openly offer constructive analysis that was counter to the wishes of the republican party leaders and / or the president.

On June 2, 2018, Kyle Cheney of of Politico penned the following report, “Trump allies gang up on Gowdy” (“The GOP lawmaker was once a conservative hero. Now he’s under fire on the right for balking at Trump’s ‘spygate’ theory.”)

“Rep. Trey Gowdy has been a pitbull investigator for Republicans for years. Now, he’s is in President Donald Trump’s doghouse for daring to challenge the president’s unsupported claim that Democrats and their sympathizers in the FBI embedded a spy in his 2016 campaign.”

“Trump allies have been pummeling Gowdy in recent days, branding him a gullible or clueless backer of the intelligence community. Trump’s personal attorney, Rudy Giuliani, labeled him “uninformed.” Another Trump-tied attorney, Victoria Toensing, said Gowdy “doesn’t know diddly-squat” about the particulars of federal investigations. And Fox News host Lou Dobbs tagged him a “RINO” — a term for a fake Republican.”

“It’s the latest twist in Gowdy’s enigmatic tenure in Congress. Once a conservative hero for his headline-grabbing inquisitions of the Obama administration — over the “Fast and Furious” gun-running program and alleged IRS targeting of conservatives, as well as his highly charged Benghazi probe — Gowdy has also bedeviled partisans by sometimes refusing to toe a pro-Trump line. At times, Trump himself has seemed perplexed; in the span of two years, the president once hailed Gowdy as a brilliant lawmaker before bashing him as a failure and then embracing him once again.”

“Now, after years shouldering the House GOP’s weightiest and most politically explosive investigations, he’s again drawn the ire of Trump-world. And this time, he’s virtually alone, getting little support from his House colleagues.”

“The retiring South Carolina Republican’s emergence as a critic of Trump’s conspiracy theory began Tuesday 5/30/18), when Gowdy went on Fox News to discuss his takeaway from a classified Justice Department briefing last week about the president’s claims.”

“Gowdy insisted that the FBI did not, in fact, plant a spy in the Trump camp for political purposes. Rather, he said, the FBI appropriately deployed an informant to glean intelligence from members on the outer edge of Trump’s campaign. The FBI had received troubling evidence that those individuals had suspect ties to Russia, and the bureau had been obligated to pursue those legitimate leads, Gowdy said. The briefing, for only a select group of nine senior lawmakers of both parties, only bolstered his position, he said.

“I am even more convinced that the FBI did exactly what my fellow citizens would want them to do when they got the information they got — and that it has nothing to do with Donald Trump,” Gowdy said in the interview.” 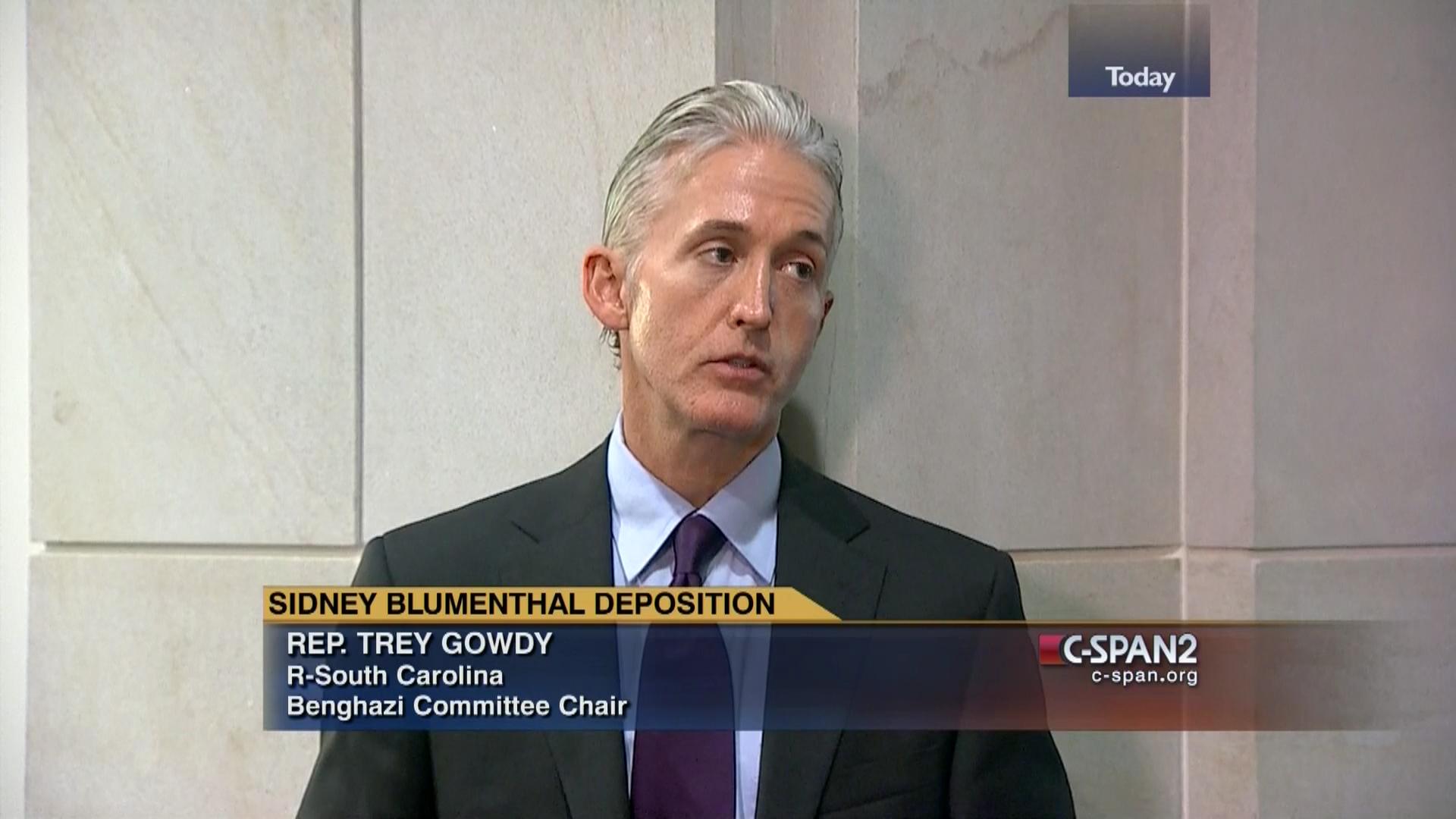 Speaker Paul Ryan, one of just four other Republicans to attend last week’s Justice Department briefing on the matter, has not addressed the substance of Gowdy’s assertions. But asked whether he backed them, Ryan’s office issued a broad statement of support for the House Oversight Committee chairman.”

“The speaker has full confidence in Chairman Gowdy’s judgement, and is grateful for his leadership and service,” Ryan spokeswoman AshLee Strong said Friday.

“The episode isn’t the first time Gowdy has ended up frustrating Trump’s circle. House conservatives, Trump allies and even Trump himself blasted Gowdy in June 2016 for declining to issue a harsher indictment of Hillary Clinton’s role in the Benghazi attacks that left four Americans dead in 2012.” 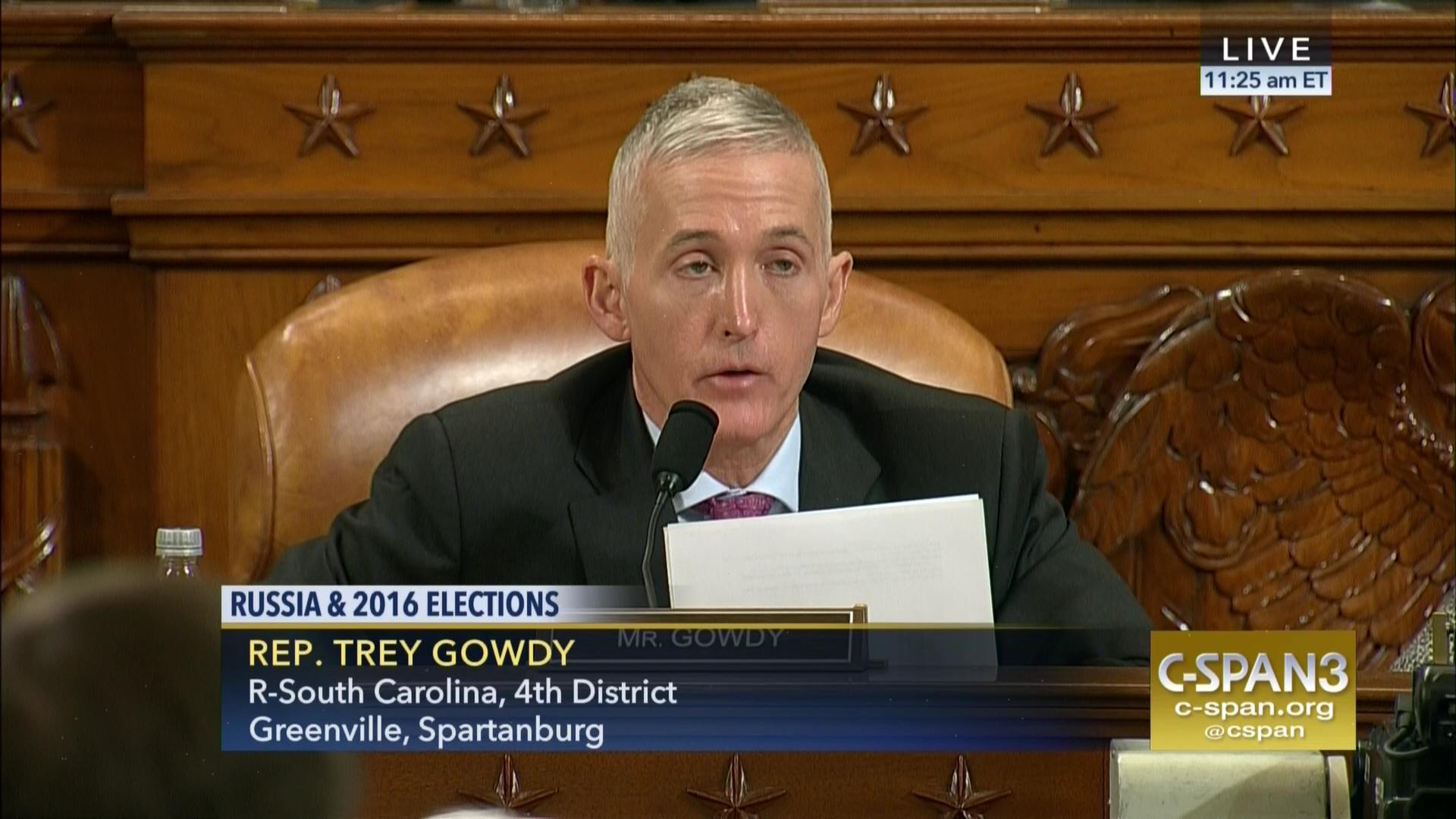 “Trump, who in 2014 praised Gowdy’s ascension to lead the Benghazi probe as a “great decision,” has had a seesawing relationship with the soft-spoken South Carolinian in recent years. In July 2015, Trump tweeted a supporters’ suggestion that Gowdy become his attorney general. But he soured on him in late 2015, when Gowdy endorsed his primary rival Sen. Marco Rubio. “I hope @TGowdySC does better for Rubio than he did at the #Benghazi hearings, which were a total disaster for Republicans & America!” he tweeted at the time.”

But by mid-2016, Trump was ready to embrace Gowdy again after earning his endorsement. “Thank you for your wonderful endorsement today @TGowdySC. It means a great deal to me,” Trump tweeted at the time. “We will not disappoint!”

Gowdy revealed in a CBS interview on Wednesday that he has “never met or talked to” Trump, a startling fact for a senior lawmaker who has had an outsize role in the House for years. Meanwhile, Trump approvingly quoted comments Gowdy made about Attorney General Jeff Sessions in a series of tweets Wednesday.

But that didn’t stop the onslaught of attacks on Gowdy from Trump’s most vocal allies. “He’s drinking the Kool-Aid,” Giuliani said of Gowdy in a CNN interview, before saying Gowdy “screwed up” on Benghazi.

“Huckabee said Gowdy seemed to unquestioningly accept the Justice Department’s briefing on the FBI informant. “Such credulity seems strangely out of character for someone like Gowdy, a seasoned prosecutor who knows better than to believe people who continue to hide mountains of evidence,” Huckabee wrote.”

“For years, Gowdy has been considered one of the GOP’s most versatile and skilled legal experts, owing to his background as a federal prosecutor. In addition to chairing the House Oversight Committee, he has seats on the Intelligence and Judiciary committees, which put him in a prominent position to tackle high-profile investigations.”

“But Gowdy has also heartened Democrats with his vocal support of the FBI and special counsel Robert Mueller, who have come under attack from Trump supporters. And that’s put him in a vulnerable position among House Republicans who have largely kept quiet in the face of Trump’s attacks on law enforcement.”

“In addition to defending FBI conduct this week, Gowdy urged Trump to sit for an interview with Mueller and said if he’s done nothing wrong, he should tell Mueller the same things in public that he’s said in private.”