There is breaking news by the New York Times on the 2nd of June 2018 regarding a confidential January 2018 memo sent by the republican President Donald Trump’s legal team to the FBI’s Special Counsel Robert Mueller III who is leading the Trump-Russia probe, which the reporters managed to obtain a copy. The president’s lawyers have presented an argument as to why he doesn’t have to testify.

I strongly suspect that the president’s current legal team leaked this confidential 20 page letter to the New York Times because it isn’t written as a serious legal brief but as a public relations paper designed to influence the president’s base.

“President Trump’s lawyers have for months quietly waged a campaign to keep the special counsel from trying to force him to answer questions in the investigation into whether he obstructed justice, asserting that he cannot be compelled to testify and arguing in a confidential letter that he could not possibly have committed obstruction because he has unfettered authority over all federal investigations.”

“In a brash assertion of presidential power, the 20-page letter — sent to the special counsel, Robert Mueller III, and obtained by The New York Times — contends that the president cannot illegally obstruct any aspect of the investigation into Russia’s election meddling because the Constitution empowers him to, “if he wished, terminate the inquiry, or even exercise his power to pardon.”

“Mr. Trump’s lawyers fear that if he answers questions, either voluntarily or in front of a grand jury, he risks exposing himself to accusations of lying to investigators.”

“Mr. Trump’s broad interpretation of executive authority is novel and is likely to be tested if a court battle ensues over whether he could be ordered to answer questions. It is unclear how that fight, should the case reach that point, would play out.”

“We don’t know what the law is on the intersection between the obstruction statutes and the president exercising his constitutional power to supervise an investigation in the Justice Department,” said Jack Goldsmith, a Harvard Law School professor who oversaw the Justice Department’s Office of Legal Counsel during the Bush administration. “It’s an open question.”

“Hand-delivered to the special counsel’s office in January and written by 2 of the president’s lawyers at the time, John M. Dowd and Jay A. Sekulow, the letter offers a rare glimpse into one side of the high-stakes negotiations over a presidential interview.”

“Though it is written as a defense of the president, the letter recalls the tangled drama of early 2017 as the new administration dealt with the Russia investigation. It also serves as a reminder that in weighing an obstruction case, Mr. Mueller is reviewing actions and conversations involving senior White House officials, including the president, the vice president and the White House counsel.”

“The letter also lays out a series of claims that foreshadow a potential subpoena fight that could unfold in the months leading into November’s midterm elections.”

“We are reminded of our duty to protect the president and his office,” the lawyers wrote, making their case that Mr. Mueller has the information he needs from tens of thousands of pages of documents they provided and testimony by other witnesses, obviating the necessity for a presidential interview.”

“Mr. Mueller has told the president’s lawyers that he needs to talk to their client to determine whether he had criminal intent to obstruct the investigation into his associates’ possible links to Russia’s election interference. If Mr. Trump refuses to be questioned, Mr. Mueller will have to weigh their arguments while deciding whether to press ahead with a historic grand jury subpoena.”

“Mr. Mueller had raised the prospect of subpoenaing Mr. Trump to Mr. Dowd in March. Emmet T. Flood, the White House lawyer for the special counsel investigation, is preparing for that possibility, according to the president’s lead lawyer in the case, Rudolph W. Giuliani.”

“The attempt to dissuade Mr. Mueller from seeking a grand jury subpoena is one of two fronts on which Mr. Trump’s lawyers are fighting. In recent weeks, they have also begun a public-relations campaign to discredit the investigation and in part to pre-empt a potentially damaging special counsel report that could prompt impeachment proceedings.”

“Mr. Trump complained on Twitter on Saturday before this article was published that the disclosure of the letter was a damaging leak to the news media and asked whether the “expensive Witch Hunt Hoax” would ever end.”

There was No Collusion with Russia (except by the Democrats). When will this very expensive Witch Hunt Hoax ever end? So bad for our Country. Is the Special Counsel/Justice Department leaking my lawyers letters to the Fake News Media? Should be looking at Dems corruption instead?

“Mr. Trump and his lawyers have also attacked the credibility of a key witness in the inquiry, the fired F.B.I. director James B. Comey; complained about what they see as investigative failures; and contested the interpretation of significant facts.”

“Mr. Giuliani said in an interview that Mr. Trump is telling the truth but that investigators “have a false version of it, we believe, so you’re trapped.” And the stakes are too high to risk being interviewed under those circumstances, he added: “That becomes not just a prosecutable offense, but an impeachable offense.”

“Mr. Trump’s defense is a wide-ranging interpretation of presidential power. In saying he has the authority to end a law enforcement inquiry or pardon people, his lawyers ambiguously left open the possibility that they were referring only to the investigation into his former national security adviser, Michael T. Flynn, which he is accused of pressuring the F.B.I. to drop — or perhaps the one Mr. Mueller is pursuing into Mr. Trump himself as well.”

“Mr. Dowd and Mr. Sekulow outlined 16 areas they said the special counsel was scrutinizing as part of the obstruction investigation, including the firings of Mr. Comey and of Mr. Flynn, and the president’s reaction to Attorney General Jeff Sessions’s recusal from the Russia investigation.”

“Over the past year, the president’s lawyers have mostly cooperated with the inquiry in an effort to end it more quickly. Mr. Trump’s lawyers say he deserves credit for that willingness, citing his waiver of executive privilege to allow some of his advisers to speak with Mr. Mueller.”

“We cannot emphasize enough that regardless of the fact that the executive privilege clearly applies to his senior staff, in the interest of complete transparency, the president has allowed — in fact, has directed — the voluntary production of clearly protected documents,” his lawyers wrote.” 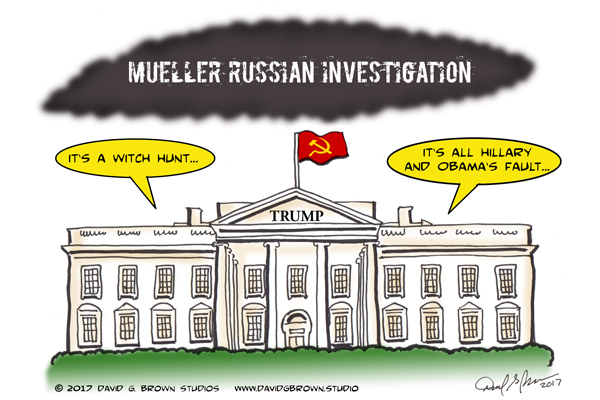 “Presidents frequently assert executive privilege, their right to refuse demands for information about internal executive branch dealings, but its limits are murky and mostly untested.”

“Mr. Trump’s lawyers are gambling that Mr. Mueller may not want to risk an attempt to forge new legal ground by bringing a grand jury subpoena against a sitting president into a criminal proceeding.”