How often have we heard the republican party folks spouting the refrain, we want justices who honor the constitution and who do not create new law.

In general, most justices feel obligated to give respect and significant weight to the concept of following precedent or “stare decisis. Courts tend to avoid overturning precedence in the interests of institutional consistency and integrity.  The Supreme Court Justice Anthony Kennedy who recently announced his retirement, demonstrated a pattern of a cavalier attitude towards the application of stare decisis which is reflected in many of his most important cases. Many of his decisions are based on his view of inherent rights contained, but not always enumerated, in the Constitution.

The concept that future republican nominated US Supreme Court justices will live up to their promises to follow precedence / “stare decisis” is not believable.

In addition, as per a 6/30/18 Palmer Report, “Richard Painter, who served as the White House chief ethics counsel for the final years of the George W. Bush administration, and who has since become an outspoken Trump critic and a Democratic candidate for Senate, is proposing a method of derailing Trump’s Supreme Court nominee. Here’s what he tweeted about the matter: “The circumstances of Justice Kennedy’s resignation must be investigated by the Senate Judiciary Committee before any replacement is considered. The Constitution does not give Trump the power to use underhanded means to induce Supreme Court resignations.”

“It’s come to light that Justice Anthony Kennedy’s son was a key executive at Deutsche Bank, and that he worked closely with Donald Trump on various banking matters. Deutsche Bank has loaned billions of dollars to Trump, much of it under suspicious circumstances. Deutsche was also busted by U.S. and European regulators in early 2018 for a years-long pattern of laundering billions of dollars of Russia money into the hands of clients in places like New York City. Now Justice Kennedy is suddenly handing his son’s close financial partner Donald Trump a key victory at a crucial time.”

On June 28, 2018, Jonathan Turley, a Georgetown University law professor penned the following op-ed piece for the Washington Post, “Kennedy’s decisions may not last. It might be his own fault.”

“For 30 years, one voice has rallied Supreme Court justices on the left and the right : that of Associate Justice Anthony Kennedy. Liberals rejoiced in his decisions barring the execution of minors, recognizing a constitutional right to same-sex marriage, defending free speech and protecting legal abortions. Conservatives revered iconic decisions like Citizens United (protecting the rights of corporate speech) and Gonzales v. Carhart (upholding a federal law that criminalizes partial-birth abortions).”

“Kennedy’s jurisprudence reflected a unique mix of libertarian and natural-rights elements. To him, the Constitution may not have been the “living” document embraced by his liberal colleagues, but it evolved in its application to new forms of expression and association. That evolution often meant discarding prior doctrines and the time-honored judicial norm of stare decisis — the notion that courts should “stand by things decided.” Absent significant changes in the underlying law or conditions, courts avoid overturning precedent in the interests of institutional consistency and integrity. Kennedy’s cases should rest comfortably within that cocoon of tradition. Indeed, at one time, Kennedy insisted that “the whole object of the judiciary is to ensure stability, continuity, and so we pride ourselves on the fact that there is little change.”

“But contained in his long tenure, and in many of his most historic cases, is an occasional disdain for precedent; his most important rulings were built on the ashes of prior decisions. In Lawrence v. Texas, for example, Kennedy tossed out the nearly two-decade-old ruling in Bowers v. Hardwick, citing changes in legal and social views. “Bowers was not correct when it was decided, and it is not correct today,” he wrote. “It ought not to remain binding precedent.” In June, he advanced his attack on stare decisis even further, authoring a 5-to-4 decision that cavalierly dispensed with a major 1992 tax precedent. Then he signed onto a majority opinion this past week overturning an important 1977 case about union dues. Kennedy began his career standing by things decided but ended it creating new doctrines.” 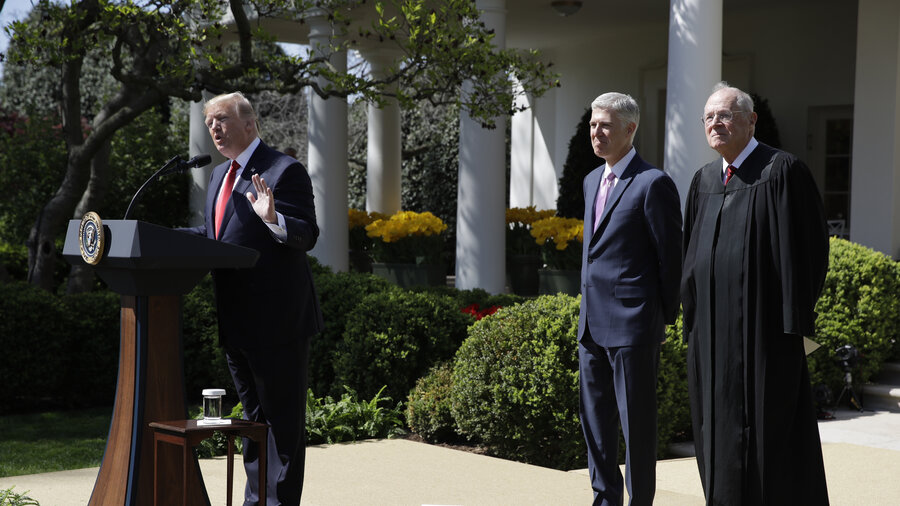 “Unwittingly, Kennedy may have crafted the perfect weapon for activist judges. His historic rulings may stand the test of time. But if any of his major opinions are voided by future courts, the weapon may not bear the fingerprints of his more conservative replacement but rather, in a strange way, his own.”

In the recent South Dakota v. Wayfair decision, Kennedy wrote for a 5-to-4 majority that states may tax online purchases. The court’s previous standard, from Quill Corp. v. North Dakota in 1992, allowed state taxation only where a business has a physical presence — a paradigm that guided states and Congress for 16 years, until Wayfair . Kennedy dismissed the notion that he should follow the earlier doctrine in the interest of institutional consistency, quoting a 2009 opinion that “stare decisis is not an inexorable command.” Given the court’s shifting interpretation of the Constitution’s commerce clause, he said, “the Court should be vigilant in correcting the error.”

“On Wednesday, Kennedy signed on to yet another opinion driving a stake into the heart of stare decisis. In Janus v. AFSCME Council 31 , the majority set aside a precedent established in 1977 in Abood v. Detroit Board of Education . In that case, the court upheld the constitutionality of requiring nonunion workers to pay dues to unions that negotiate on behalf of all workers. Justice Samuel Alito’s majority opinion in Janus declared Abood  “poorly reasoned” and said the doctrine of stare decisis is “weakest” when deciding matters of constitutional law (as opposed to statutory interpretations). By joining the majority, Kennedy endorsed the view that a past case, such as Abood, can be set aside based on the “quality” of its “reasoning.”

“The problem for Kennedy: That “weakest” application of stare decisis could be applied to many of his most important decisions, which turn on his view of inherent rights contained, but not always enumerated, in the Constitution. Rejecting the notion that stare decisis is an “inexorable command” and downgrading it to a pliable consideration will allow reversals of his opinions. Just as the court could set aside the 1992 decision in Quill Corp., a more conservative successor could find that equally corrective measures are needed for Kennedy’s opinion (with Sandra Day O’Connor and David Souter) in Planned Parenthood v. Casey , the 1992 case preserving the right to abortions.”

“The uncomfortable fact is that Kennedy’s legacy is as fragile as it is immense. Many of his rulings were decided by a one-justice margin: He supplied the critical fifth vote upholding the right to burn the American flag in Texas v. Johnson in 1989, declaring, “It is poignant but fundamental that the flag protects those who hold it in contempt.” He was with the 5-to-4 majority in Kennedy v. Louisiana (2008), which said convicts could not be put to death for child rape. In the 5-to-4 Boumediene v. Bush ruling (2008), he afforded Guantanamo detainees basic due process protections. Only five justices voted to decriminalize gay sex in Lawrence v. Texas (2003). The same number found a right to same-sex marriage in Obergefell v. Hodges(2015).”

“With his legacy dangling by a single vote — his own — Kennedy advanced views that were not necessarily shared even by some of the justices who joined his opinions. He fought for decades to create a controversial constitutional “right to dignity,” for instance. The right to choose abortion, he wrote in Casey, is based on “personal dignity and autonomy,” which “are central to the liberty protected by the Fourteenth Amendment.” He elaborated on this concept in a variety of later cases involving issues from gay rights to prisoner rights. In declaring a constitutional protection for same-sex marriage, Kennedy did not emphasize equal protection but rather esteem: “They ask for equal dignity in the eyes of the law. The Constitution grants them that right.”

“The idea of a constitutionally protected right to dignity infuriates many constitutional textualists on the right. For them, this is a creature of Kennedy’s imagination, not the Constitution. If Trump’s next court nominee doesn’t share Kennedy’s view, his replacement might wind up citing Kennedy’s own words in Wayfair to scrap “equal dignity” as any kind of legal standard.” 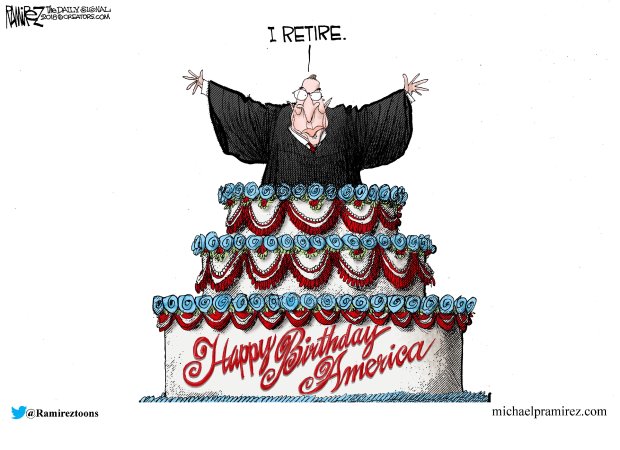 The risk of something like that is even greater after Kennedy and his colleagues effectively punted, in their June decision in Masterpiece Cakeshop v. Colorado Rights Commission, a case in which a same-sex couple was denied a wedding cake by an observant Christian baker. Rather than resolve the conflict between free speech and anti-discrimination laws, the court sent the case back to a lower court with an ambiguous demand for reconsideration. If a future court decides to hear Cakeshop, the justices would have a ready-made opportunity to dispense with the dignity rights of LGBT consumers.

Link to article: Kennedy’s decisions may not last. It might be his own fault. 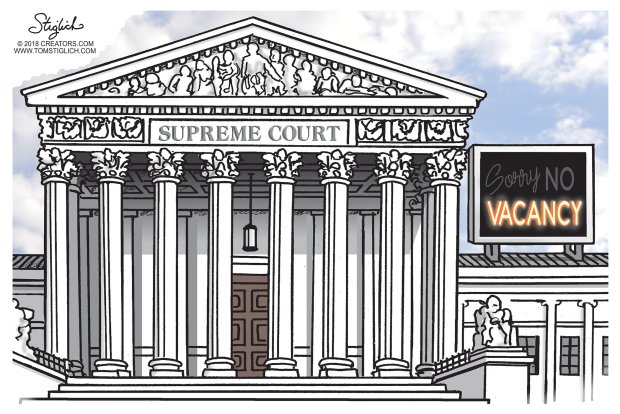 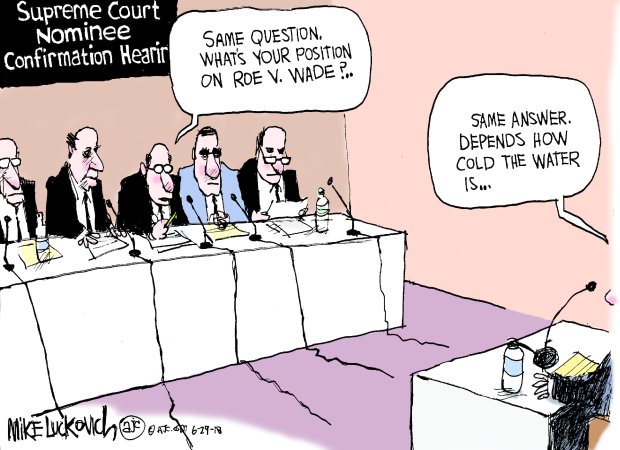 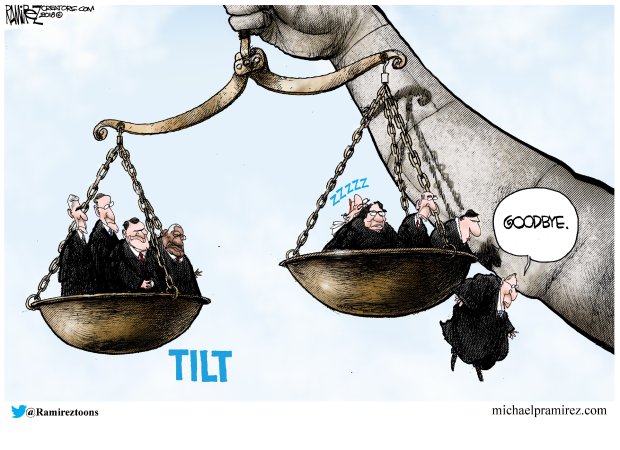