On the 3rd day of July 2018, the 15 member US Senate Intelligence Committee comprised of 8 republicans and 7 democrats issued a bipartisan report , unanimously confirming the US IC community’s conclusions that Russia at the direction of its President Vladimir Putin, did indeed meddle extensively in the 2016 US elections. In addition the Senators’ work product verified that Russia’s interference was designed to help Donald Trump win the presidency.

The report does reference the Christopher Steele 35 page dossier document, only to state that it did not inform the intelligence community’s assessment “in any way,”

This report was publicly released late on a day before a major US holiday, the 4th of July’s US Independence Day, to lessen its news worthy impact as it is counter to the republican President Donald Trump’s assertions that he’s still not convinced that Russia interfered with the 2016 US elections and it out-rightly repudiates the US House Intel report.

As per a 7/3/18 Hill report by Katie Bo Williams, “All in all, the Senate panel’s report was a unflinching contradiction of many of the core claims made by Trump allies in the House. ”

“The House Intelligence Committee in March released their report into 2016 election meddling, finding that the small group of intelligence officials who made the assessment in January 2017 did not meet the appropriate evidentiary standard to make that judgment with such certainty.”

“The House committee declined to make an assessment about whether the intelligence community’s underlying claim — that Putin developed a clear preference for Trump — was correct, one of the GOP members leading that probe said at the time. What the panel has taken issue with, according to Rep. Mike Conaway (R-Texas), is “how they came to it and the underlying documents they used.” 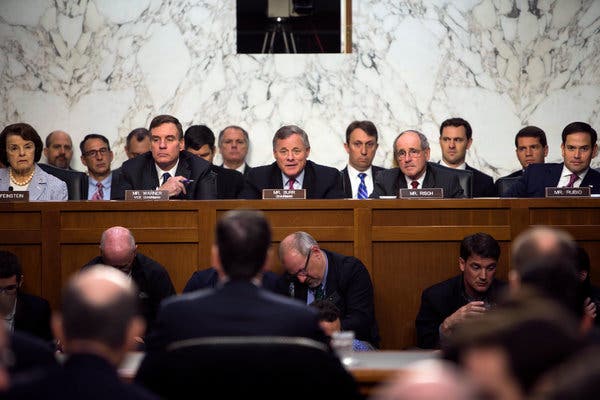 “The Senate panel called the overall assessment a “sound intelligence product,” saying evidence presented by the FBI, CIA and National Security Agency supported their collective conclusion that the Russian government had “developed a clear preference for Trump” over his opponent in the race, Hillary Clinton. Where the agencies disagreed, the Senate panel found those differences were “reasonable.” “The intelligence community determined that the Kremlin intended to “denigrate” and “harm” Clinton, and “undermine public faith in the U.S. democratic process” while helping Trump. The committee’s report backs that conclusion. It also supports the agencies’ findings about Russia’s tactics, which included cyberattacks and intelligence collection “against the U.S. primary campaigns, think tanks, and lobbying groups they viewed as likely to shape future U.S. policies.”

“The Senate panel’s assessment isn’t all glowing: The committee found the agencies’ assessment of Russia’s propaganda operation was outdated, relying on data from 2012 — something the Senate panel called a “shortcoming.” Senators also criticized the intelligence community’s report for not providing more comprehensive historical context, to put Russia’s 2016 operation into better perspective.”

“But the panel stressed that intelligence analysts were under “no politically motivated pressure to reach any conclusions,” and that their conclusions had been prescient as well as accurate, noting that “the Committee’s investigation has exposed a far more extensive Russian effort to manipulate social media outlets to sow discord and to interfere in the 2016 election and American society” than the officials who drafted the assessment realized at the time they were writing it.”

“This report is the second of several that are expected from the committee as it completes its probe of Russia’s activities during the 2016 election. The panel has already released similar findings and recommendations for ensuring better election security; it is also expected to release an assessment of the Obama administration’s conduct related to the Russian threat and another document examining the role social media played in Russia’s influence operations.”

“A final report is expected to address, among other things, questions of whether there was collusion between the Trump campaign and the Kremlin. The president has vehemently denied those allegations.”

“The committee’s report indicates lawmakers also intend to address questions about an explosive “dossier” of allegations about Trump’s alleged Russia ties. The document, which was compiled by a British ex-spy, did not inform the intelligence community’s assessment “in any way,” the Senate committee found.”