The following narrative is a theory only but it is a must read with a chronicle that is entirely plausible. The author reflects my theory regarding the Republican President Donald Trump which I have been sharing for months but the author Jonathan Chait does a much better job at it.

Reading this writer’s perspective about Mr. Trump will help explain my terror at the thought of him participating in a one-on-one meeting with the Russian President Vladimir Putin without a credible witness and/ or note-taker on the 16th of July 2018, in Helsinki, Finland.

On July 8, 2018, Jonathan Chait of the New York Magazine penned the following report, “Will Trump Be Meeting With His Counterpart — Or His Handler?”

“It is often said that Donald Trump has had the same nationalistic, zero-sum worldview forever. But that isn’t exactly true. Yes, his racism and mendacity have been evident since his youth, but those who have traced the evolution of his hyper-nationalism all settle on one year in particular: 1987. Trump “came onto the political stage in 1987 with a full-page ad in the New York Times attacking the Japanese for relying on the United States to defend it militarily,” reported Edward Alden, a senior fellow at the Council on Foreign Relations. “The president has believed for 30 years that these alliance commitments are a drain on our finite national treasure,” a White House official told the Washington Post columnist Josh Rogin. Tom Wright, another scholar who has delved into Trump’s history, reached the same conclusion. “1987 is Trump’s breakout year. There are only a couple of examples of him commenting on world politics before then.”

“What changed that year? One possible explanation is that Trump published The Art of the Deal, which sped up his transformation from an aggressive, publicity-seeking New York developer to a national symbol of capitalism. But the timing for this account does not line up perfectly — the book came out on November 1, and Trump had begun opining loudly on trade and international politics two months earlier. The other important event from that year is that Trump visited Moscow.”

“During the Soviet era, Russian intelligence cast a wide net to gain leverage over influential figures abroad. The Russians would lure or entrap not only prominent politicians and cultural leaders, but also people whom they saw as having the potential for gaining prominence in the future. In 1986, Soviet ambassador Yuri Dubinin met Trump in New York, flattered him with praise for his building exploits, and invited him to discuss a building in Moscow.” 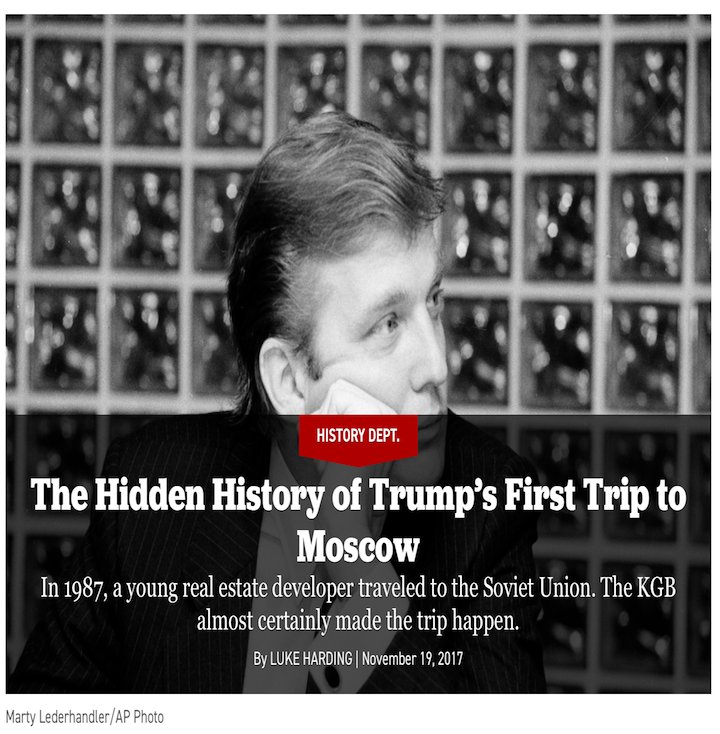 “Trump visited Moscow in July 1987. He stayed at the National Hotel, in the Lenin Suite, which certainly would have been bugged. There is not much else in the public record to describe his visit, except Trump’s own recollection in The Art of the Deal that Soviet officials were eager for him to build a hotel there.”

(Is there) “the small but real chance that the president of the United States has been influenced or compromised by a hostile foreign power for decades?”

“Trump returned from Moscow fired up with political ambition. He began the first of a long series of presidential flirtations, which included a flashy trip to New Hampshire. Two months after his Moscow visit, Trump spent almost $100,000 on a series of full-page newspaper ads that published a political manifesto.”

“An open letter from Donald J. Trump on why America should stop paying to defend countries that can afford to defend themselves,” as Trump labeled it, launched angry populist charges against the allies that benefited from the umbrella of American military protection. “Why are these nations not paying the United States for the human lives and billions of dollars we are losing to protect their interests?” (Does this sound familiar?)

“Trump’s letter avoided the question of whom the U.S. was protecting those countries from.   The primary answer, of course, was the Soviet Union. After World War II, the U.S. had created a liberal international order and underwritten its safety by maintaining the world’s strongest military. A central goal of Soviet, and later Russian, foreign policy was to split the U.S. from its allies.”

“The safest assumption is that it’s entirely coincidental that Trump launched a national campaign, with himself as spokesman, built around themes that dovetailed closely with Soviet foreign-policy goals shortly after his Moscow stay. Indeed, it seems slightly insane to contemplate the possibility that a secret relationship between Trump and Russia dates back this far. But it can’t be dismissed completely. “

“Throughout his career, Trump has always felt comfortable operating at or beyond the ethical boundaries that constrain typical businesses. In the 1980s, he worked with La Cosa Nostra, which controlled the New York cement trade, and later employed Michael Cohen and Felix Sater, both of whom have links to the Russian Mafia. Trump habitually refused to pay his counterparties, and if the people he burned (or any journalists) got in his way, he bullied them with threats. Trump also reportedly circulated at parties for wealthy men featuring cocaine and underage girls (Jeffrey Epstein parties).”

“One might think this notoriety immunizes Trump from blackmail. Curiously, however, Trump’s tolerance for risk has always been matched by careful control over information. He maintains a fanatical secrecy about his finances and has paid out numerous settlements to silence women. The combination of a penchant for compromising behavior, a willingness to work closely with criminals, and a desire to protect aspects of his privacy makes him the ideal blackmail target.”

“It is not difficult to imagine that Russia quickly had something on Trump, from either exploits during his 1987 visit or any subsequent embarrassing behavior KGB assets might have uncovered. But the other leverage Russia enjoyed over Trump for at least 15 years is indisputable — in fact, his family has admitted to it multiple times. After a series of financial reversals and his brazen abuse of bankruptcy laws, Trump found it impossible to borrow from American banks and grew heavily reliant on unconventional sources of capital. Russian cash proved his salvation. From 2003 to 2017, people from the former USSR   made  86 all-cash purchases — a red flag of potential money laundering — of Trump properties, totaling $109 million. In 2010, the private-wealth division of Deutsche Bank also loaned him hundreds of millions of dollars during the same period it was laundering billions in Russian money. “Russians make up a pretty disproportionate cross-section of a lot of our assets,” said Donald Jr. in 2008. “We don’t rely on American banks. We have all the funding we need out of Russia,” boasted Eric Trump in 2014.”

“Since Vladimir Putin, a former KGB agent, rose to power in 1999, money has become a key source of Russian political leverage. The Russian state (and hence Putin) controls the most lucrative sectors of its economy, and Russian investment is not designed solely to maximize return. Shady business transactions offer the perfect cover for covert payments, since just about the entire Russian economy is shady. Trump’s adamant refusal to disclose his tax returns has many possible explanations, but none is more obvious than the prospect that he is hiding what are effectively bribes.”

“During the Obama administration, Russia grew more estranged from the United States as its aggressive behavior toward its neighbors triggered hostile responses from NATO. Also during this time, Trump carved out a brand as a populist hero of the right by publicly questioning Obama’s birthplace and legitimacy.”

“In July 2013, Trump visited Moscow again. If the Russians did not have a back-channel relationship or compromising file on Trump 30 years ago, they very likely obtained one then. Former FBI director James Comey recounts in his book that Trump was obsessed with reports that he had been recorded in a hotel room watching prostitutes urinate on a bed that Barack Obama had once slept in. Trump, Comey wrote, “argued that it could not be true because he had not stayed overnight in Moscow but had only used the hotel room to change his clothes.” The journalists Michael Isikoff and David Corn have reconstructed Trump’s trip to Moscow and established that he did in fact stay overnight.”

“This was not the only allegation Trump forcefully and implausibly denied in his early meetings with Comey. He also denied that he had offered a pornographic-film star money to come to his room, grabbed a woman sitting next to him on an airplane, and mocked a disabled reporter at a rally. The other denials have gained no credence in the media. (Indeed, the last incident was broadcast on national television.) But Trump’s dismissal of the Moscow-hotel-room allegation has been given the benefit of the doubt by most reporters, who typically describe the charge as “salacious” and “unverified,” which it most certainly is, and treat that to mean “absurd,” which it is not. There is growing reason to think the pee tape might indeed exist.”

“There has never been much doubt about Russia’s motive to engineer a caper like this. Russian intelligence has a documented and long-standing practice of gathering compromising intelligence on visiting dignitaries. The use of prostitutes and the bugging of hotel rooms are standard. The skepticism has instead focused on both the source of the allegations, former British-intelligence official turned private investigator Christopher Steele, and Trump himself.”

“Steele’s dossier burst into public view in January 2017, introducing so many astonishing claims into the public domain that it read like politicized fiction, a modern-day Protocols of the Elders of Zion. “There has been no public corroboration of the salacious allegations against Mr. Trump, nor of the specific claims about coordination between his associates and the Russians,” the Times stated authoritatively last fall. “In fact, some of those claims have been challenged with supporting evidence. For instance, Mr. Trump’s longtime personal lawyer, Michael D. Cohen, produced his passport to rebut the dossier’s claim that he had secret meetings in Prague with a Russian official last year.” 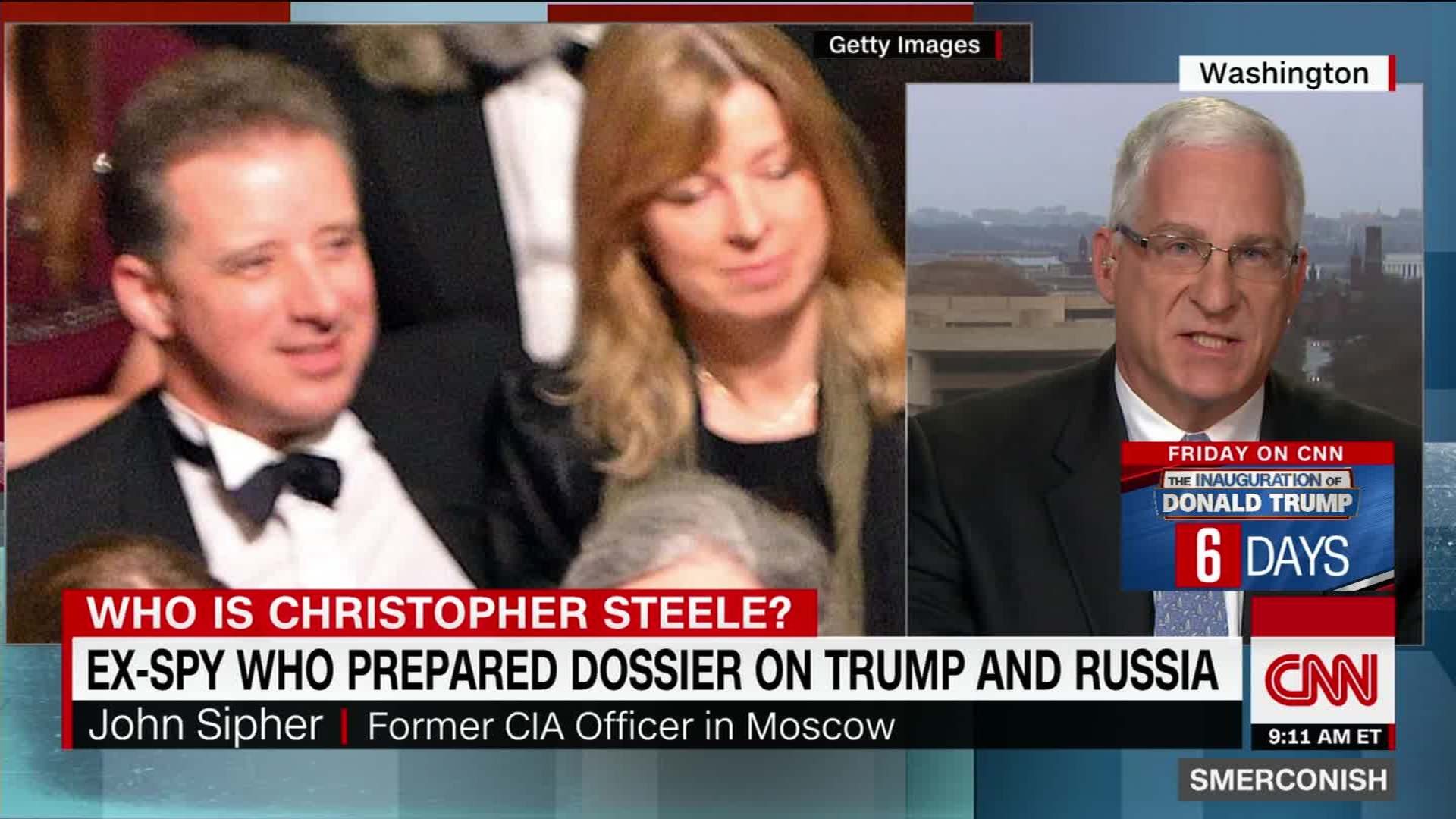 “The truth is that much of the reporting of the Russia scandal over the past 18 months has followed the contours of what Steele’s sources told him. Steele reported that “the Kremlin had been feeding Trump and his team valuable intelligence on his opponents, including Democratic presidential candidate Hillary Clinton,” in June 2016, days after the Trump Tower meeting occurred but a year before it would be publicly confirmed. Steele obtained early news of the Kremlin’s strategy to exploit divides within the Democratic Party through social media; the role of Carter Page, a member of Trump’s foreign-policy team whom Russia had been trying to cultivate as a spy since at least 2013; and other now-familiar elements of the story.”

“Even the accusations in the dossier that have purportedly been refuted have gained support from law enforcement. Mueller has reportedly obtained evidence that Cohen actually did visit Prague during the 2016 campaign, contrary to his denials. The FBI has learned that Cohen “was in frequent contact with foreign individuals” who “had knowledge of or played a role in 2016 election meddling,” according to BuzzFeed News.”

“Then there is Trump himself. While the president’s character has never been exactly deemed above reproach, some doubts have lingered about whether he would really hire prostitutes to defile a bed merely because Obama had slept there and whether a tape of such a thing would truly shame him.”

“These questions have been answered in the affirmative…

Link to entire lengthy report: What If Trump Has Been a Russian Asset Since 1987?