George F. Will, A Conservative Writer Shares His Take On President’s Helsinki Performance I have always been envious of the writing skills of the conservative columnist George F. Will even though, I frequently disagreed with his thinking. However, this conservative “Never Trumper” is one of the many from the republican party who are asking all voters to disregard policy considerations and to place their ballots only for Democratic candidates this upcoming November 2018 elections. 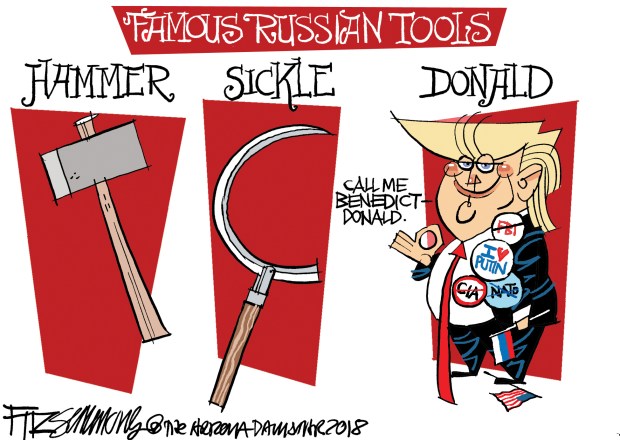 On July 17, 2018, George F. Will for the Washington Post penned the following op-ed piece, “This sad, embarrassing wreck of a man”

“America’s child president had a play date with a KGB alumnus, who surely enjoyed providing day care. It was a useful, because illuminating, event: Now we shall see how many Republicans retain a capacity for embarrassment.” “Jeane Kirkpatrick, a Democrat closely associated with such Democratic national security stalwarts as former senator Henry Jackson and former senator and former vice president Hubert Humphrey, was President Ronald Reagan’s ambassador to the United Nations. In her speech at the 1984 Republican National Convention in Dallas, she explained her disaffection from her party: “They always blame America first.” In Helsinki, the president who bandies the phrase “America First” put himself first, as always, and America last, behind President Vladimir Putin’s regime.”

“Because the Democrats had just held their convention in San Francisco, Kirkpatrick branded the “blame America first” cohort as “San Francisco Democrats.” Thirty-four years on, how numerous are the “Helsinki Republicans”?

“What, precisely, did President Trump say about the diametrically opposed statements by U.S. intelligence agencies (and the Senate Intelligence Committee) and by Putin concerning Russia and the 2016 U.S. elections? Precision is not part of Trump’s repertoire: He speaks English as though it is a second language that he learned from someone who learned English last week. So, it is usually difficult to sift meanings from Trump’s word salads. But in Helsinki he was, for him, crystal clear about feeling no allegiance to the intelligence institutions that work at his direction and under leaders he chose.”

“Speaking of Republicans incapable of blushing — those with the peculiar strength that comes from being incapable of embarrassment — consider Sen. Lindsey O. Graham (S.C.), who for years enjoyed derivative gravitas from his association with Sen. John McCain (Ariz.). Graham tweeted about Helsinki: “Missed opportunity by President Trump to firmly hold Russia accountable for 2016 meddling and deliver a strong warning regarding future elections.” A “missed opportunity” by a man who had not acknowledged the meddling?” “Contrast Graham’s mush with this on Monday from McCain, still vinegary: “Today’s press conference in Helsinki was one of the most disgraceful performances by an American president in memory.” Or this from Arizona’s other senator, Jeff Flake (R): “I never thought I would see the day when our American president would stand on the stage with the Russian President and place blame on the United States for Russian aggression.” Blame America only.”

“Defense Secretary Jim Mattis, White House Chief of Staff John F. Kelly, Director of National Intelligence Daniel Coats and others might believe that they must stay in their positions lest there be no adult supervision of the Oval playpen. This is a serious worry, but so is this: Can those people do their jobs for someone who has neither respect nor loyalty for them?” “Like the purloined letter in Edgar Allan Poe’s short story with that title, collusion with Russia is hiding in plain sight. We shall learn from special counsel Robert S. Mueller III’s investigation whether in 2016 there was collusion with Russia by members of the Trump campaign. The world, however, saw in Helsinki something more grave — ongoing collusion between Trump, now in power, and Russia. The collusion is in what Trump says (refusing to back the United States’ intelligence agencies) and in what evidently went unsaid (such as: You ought to stop disrupting Ukraine, downing civilian airliners, attempting to assassinate people abroad using poisons, and so on, and on).”

“Americans elected a president who — this is a safe surmise — knew that he had more to fear from making his tax returns public than from keeping them secret. The most innocent inference is that for decades he has depended on an American weakness, susceptibility to the tacky charisma of wealth, which would evaporate when his tax returns revealed that he has always lied about his wealth, too. A more ominous explanation might be that his redundantly demonstrated incompetence as a businessman tumbled him into unsavory financial dependencies on Russians. A still more sinister explanation might be that the Russians have something else, something worse, to keep him compliant.”

“The explanation is in doubt; what needs to be explained — his compliance — is not. Granted, Trump has a weak man’s banal fascination with strong men whose disdain for him is evidently unimaginable to him. And, yes, he only perfunctorily pretends to have priorities beyond personal aggrandizement. But just as astronomers inferred, from anomalies in the orbits of the planet Uranus, the existence of Neptune before actually seeing it, Mueller might infer, and then find, still-hidden sources of the behavior of this sad, embarrassing wreck of a man.”