There’s someone who claims to have some notes pertaining the 7/13/18 Helsinki Trump-Putin summit that he has managed to leak to the press.

On July 21, 2018, Jesse Armstrong, a comedy writer, for The New York Times  penned the following satirical piece which is entirely plausible, “Secret Notes on the Trump-Putin Meeting” (One version of the events, anyway.)

“The meeting with President Trump and Vladimir V. Putin, president of Russia, last Monday was off the record, and both leaders have been reluctant to offer specifics. But here, we present a transcript we obtained of the time they spent together in Helsinki:” Trump: “Look. There’s something I need to clear up, Mr. Putin. And I didn’t want to embarrass you, so this needed to be behind closed doors. I need to ask a very tough, very direct question.”

Putin: [checks earpiece] Errrr … as in?

Trump: “Am I a spy for you guys? I don’t think I am, but I need to check. James Bond, mind control. There’s a lot of stuff out there. And I need to know. I can’t trust my guys. So, I want you to tell me, man to man, am I working for you?” Trump: “I don’t mean the stuff, the tremendous stuff we cooperate on — all the business interests and the money. And the help I was smart enough to publicly ask for in the election. Those were my ideas. But is there something more going on I don’t know about? Like a brain chip? Or a serum? Did I sign something I forgot?”

Trump: “Because I’m incredibly smart and incredibly busy — but I can’t be expected to remember every single thing that happens in a hotel room. That would be crazy to try to remember. So. Do you have anything like that?”

Trump: “I think you have something in your eye, but that’s good to know. [Pause] Do you like me? Shall we be friends?”

Putin: “We should get to work.”

Trump: “Exactly! I was thinking that! So I have a list of things I am supposed to gripe about here.”

Trump: “Oh, I don’t know, lots of things. It’s embarrassing. I don’t want to say. But listen. I’m a tough negotiator, but if I don’t mention any of these “allegations” at the news conference when we come out” —

Trump: “If I don’t mention any of these complaints, like [reads from notes] dead civilians, dead journalists, stolen parts of countries, trying to kill democracy, etc., etc., what could I get in return?”

Putin: “I mean, you probably need to mention one of them, no? Or there might be difficult questions. You want to raise Ukraine?” 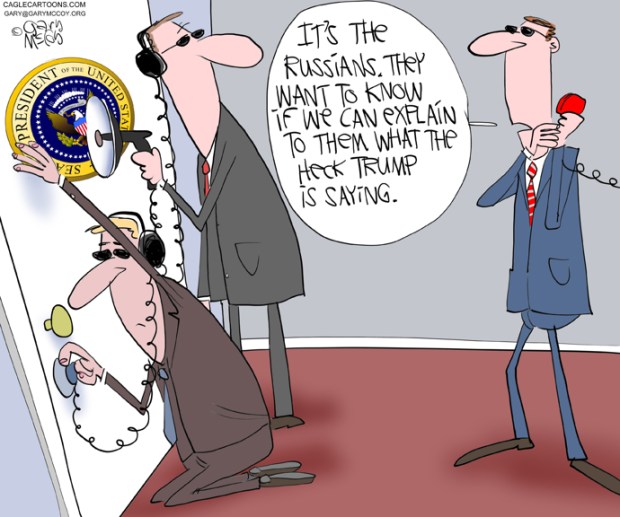 Trump: “O.K. But if I forget, will you? It’s more your thing. I might say the wrong word. I wouldn’t, because I’m smart, but I might, because I’m hungry, and when you’re hungry you can go wrong? In your head.”

Putin: “For my part I would like to talk about sanctions and the easing of” —

Trump: “Hey. I’ll tell you what, how easy is it to get a guy with poison if his name is Robert? Is that easier or harder than a man named Dave or something? Harder right? Or am I wrong? I’m sorry, you were talking.”

Putin: “I was asking about sanctions.”

Trump: “Please don’t do sanctions! I know people in my country have been bad, on internet security. Passwords. But if I apologize for the lax security that made it so easy for you guys to do what I publicly asked, could you lay off the sanctions on us?”

Putin: “We have no sanctions on you.”

Putin: “There is no reason for you to trust me or me to trust you.”

Trump: “Exactly. Would it be cool if you gave us Finland and we gave you Alaska, or is that crazy?”

Putin: “Finland is not part of Russia.”

Trump: “Not yet! Ha ha ha ha ha. I’m kidding. I’m a tough negotiator. I couldn’t give you Alaska anyway … unless? I don’t know. Let me think on it. It sounds — tough. There could be a way. Let me think. Could I maybe build a hotel in space? Guarded by a space force. Would that be allowed, would you let me?”

Trump: “Thank you! Then that’s settled! Hold on. I forget, what was I giving you? Alaska’s going to be hard. Let me think. Leave it with me. I’m smart. I’ll figure it … hold on — [looks at the translators] why are they here? Can they go?”

Putin: “Well, can you speak Russian?”

[The translators depart. Mr. Putin speaks for a while in Russian.]

Trump: “[stares for some minutes] Interesting ideas. I agree.” 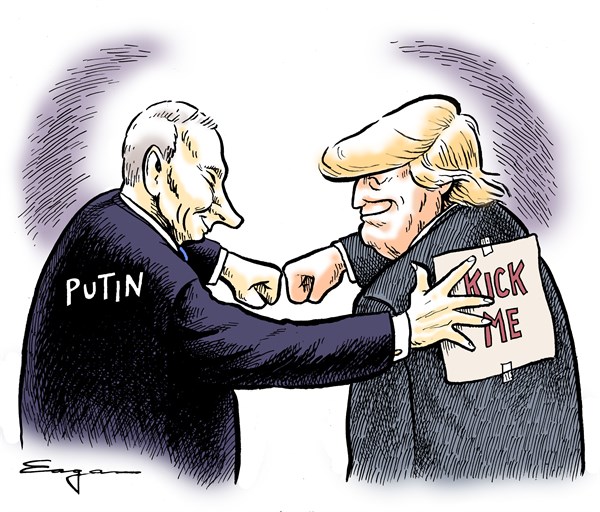