Is Russia’s President Putin In Charge Of US Military In Syria?

Dear Republicans, How do you lose a reliable voting bloc like the US Military? You have the Russian President Vladimir Putin dressing down a US military leader for insubordination for daring to question President Trump’s actions abroad. It is becoming so painfully obvious that Russia is clueless about the US culture and laws.

U.S. military leaders are expressing reluctance to work with the Russian military following a White House agreement with the Kremlin to discuss working together to help Syrian refugees return home, drawing an angry response from Moscow.

“U.S. Defense Secretary Jim Mattis said on July 24 that, at least for now, there will be no cooperation with Russia on the plan, which came out of Russian President Vladimir Putin’s summit with U.S. President Donald Trump on July 16.”

“That has not happened yet,” Mattis said at a press conference in California. “We will not be doing anything additional until [Secretary of State Mike Pompeo] and the president have further figured out at what point we are going to start working, alongside our allies, with Russia in the future.”

“Some senior Pentagon officials have expressed dismay at the prospect of working with a Russian military that has taken the opposite side in the Syrian civil war and has allegedly been complicit in the use of tactics like the bombing of civilians which they say led to the refugee problem in the first place.”

“Given Russia’s continuing support for Syrian President Bashar al-Assad, whose military has been involved in the killing of more than 400,000 people during the country’s seven-year civil war, General Joseph Votel, the commander of U.S. Central Command, said he would prefer to see “confidence-building measures” from Russia before the Pentagon gets involved with it in resettling Syrian refugees.”

“I am not recommending that. And that would be a pretty big step at this point,” Votel told reporters from ABC News and the Wall Street Journal on July 22. “I would want to make sure that this isn’t something that we stepped into lightly.” 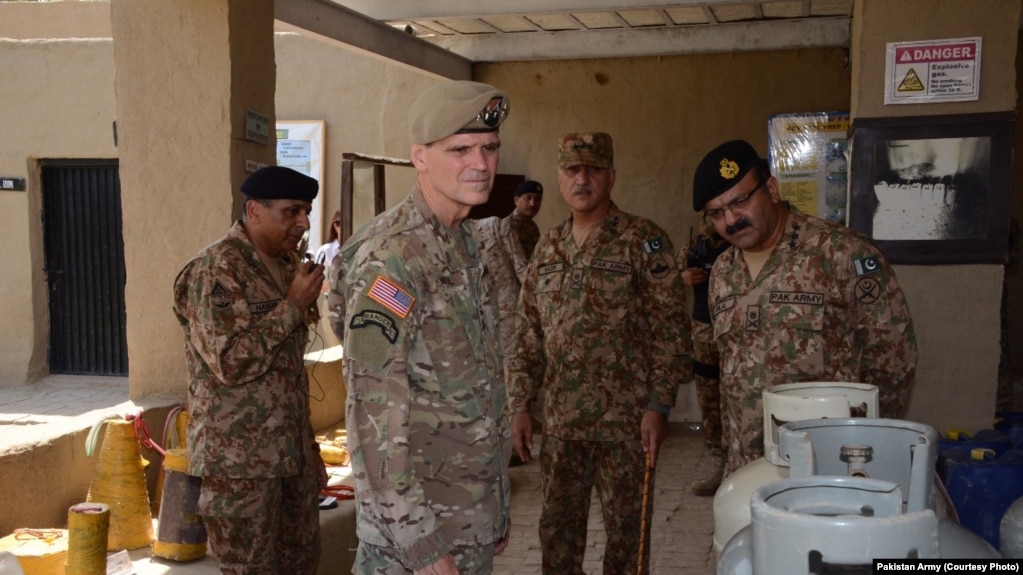 “Cooperation between the two militaries to help an estimated 6 million Syrian refugees return home is not possible under current U.S. law, Votel said.”

“Since 2014, the Pentagon has been prohibited from cooperating with the Russian military under legislation passed by Congress after Russia’s annexation of Ukraine’s Crimean Peninsula.”

‘Some Level Of Trust’ Required

“Currently, the two militaries only have regular contact over a hotline established in Syria to prevent accidental clashes between U.S. and Russian forces operating in Syria’s crowded airspace.”

“I think if we went beyond that, I think there would have to be some level of trust, confidence-building, that would need to take place before we would feel confident that we were moving in the right direction,” Votel said.

“He cited Russia’s backing of Assad despite incidents documented by the UN of Syrian forces using chemical weapons that have killed scores of civilians.”

“I’ve watched some of the things that Russia has done,” Votel said. “It does give me some pause here.”

“These are not things that give me great confidence that just by stepping over into the next level of coordination that things are going to be fine,” he added.

“It’s Russia. Let’s not forget that,” he continued. “So there would have to be a lot, I think, beyond just people saying we can do it. That would help me build confidence we can do it.”

“Votel’s remarks drew an angry response from the Russian Foreign Ministry on July 24, which in a statement on social media said the general “discredited the official position of his supreme commander-in-chief.”

“The ministry went on to criticize the U.S. military presence in Syria, calling it “illegal” and saying that U.S. forces should either withdraw or “engage in cooperation with Russia and the country’s legal leadership in the process of assisting the return of refugees.”