Most of us who are a part of the coalition of the decent,  the conservative “Never Trumpers,” ex-republicans, recalcitrant republicans, Independents, Democrats, and others like “the Resistance,” the “Women’s March,” “Indivisible” have been pondering over this question posed by one of my favorite political thinkers and writers, Thomas. L. Friedman.

When the republican President Donald Trump acts so contrary to US foreign policy developed over 70 years by past republican and democratic US administrations and to the solid advice of his own hand-picked foreign policy advisors, one can’t help but wonder, is the president serving primarily US interests or that of the Russian President Vladimir Putin.

For example, every time the president has surprised the US Pentagon with new policies,was he acting on behalf of the US or Russia.

As per the 7/22/18 Politico report by Wesley Morgan, “President Donald Trump’s flair for the unpredictable has taken a toll on his defense leaders, handing them orders and major policy shifts with little or no notice — ranging from his transgender ban, a military parade and a separate Space Force to his musings about reducing U.S. troop strength in Europe or intervening in Venezuela.”

“Last week added the specter that another capricious decree may be in the works, when the Russian military reported that President Vladimir Putin and Trump had reached a private agreement at their Helsinki summit to join forces to rebuild war-torn Syria. Such a deal would mark a major change for the U.S. troops battling the Islamic State, who are barred by law from cooperating with Russian troops fighting on behalf of the Syrian regime.”

Remember when when President Trump ignored the instructions of his advisers, not to call President Putin to congratulate him on his April 2018 election win, but he couldn’t resist the temptation. When President Trump took the extra step to set up a bi-lateral summit because he knew President Putin wanted to be back on the world stage, was he representing primarily the interests of the USA or that of Russia?

When President Trump traveled to NATO in July 2018 where he proceeded to confront world leaders about some of them not paying their fair share towards the defense of their own countries, and causing general havoc, was he representing primarily the interests of the USA or that of Russia?

As the US president acted like an ungracious guest in the UK, post his NATO debacle, where he berated his host, the Prime Minister Theresa May during an interview with a Rupert Murdoch owned paper, the Sun which ended up embarrassing his host, PM May as she was hosting him and the First Lady to a black tie dinner at the home of Winston Churchill, was he representing primarily the interests of the USA or that of Russia? Incidentally, it just so happens that President Putin is not a fan of the British Prime Minister.

As the final coup d’état,  at the joint press conference following the 7/16/18 Trump-Putin Helsinki summit, when President Trump equivocated about whether he believed his own intelligence agencies’ conclusions that Russia did interfere in the 2016 US elections or did he accept President Putin’s protestations of innocence, was he representing primarily the interests of the USA or that of Russia?. 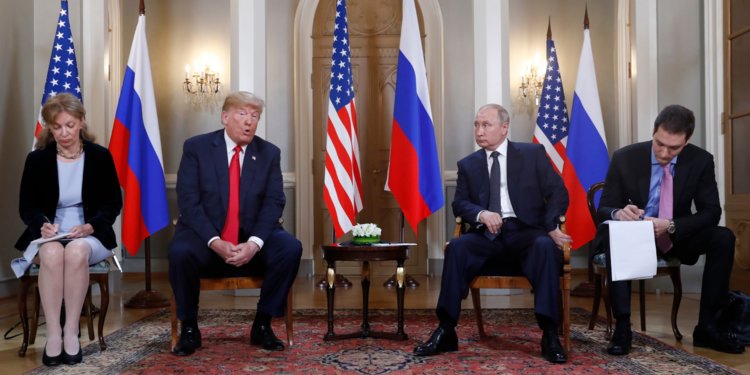 “The second I finished watching President Trump fawning over Vladimir Putin in Helsinki — refusing to defend the conclusions of his own intelligence services about Russia’s interference in our 2016 elections — I knew I was seeing something I’d never seen before. It took a few days to figure it out, but now it’s obvious: I was seeing a U.S. president put Russia first, not America first.”

“On each key question — how much Russian agents were involved in trying to tip our elections, how that issue should be further investigated, and Putin’s behavior on the world stage generally (like his government’s involvement in the downing of the Malaysian airliner over Ukraine, the murder of Russian journalists and the poisoning of a former Russian spy in the U.K.) — Trump embraced Putin’s explanations and excuses over the judgments of his own spy agencies, Justice Department, European allies and bedrock American values.”

“I like what Arnold Schwarzenegger said to Trump afterward: “You’re the president of the United States. You shouldn’t do that. What’s the matter with you?”

What’s the matter with you? I don’t know the definitive answer to that question, but I know that it will be an increasing problem as we enter Phase 3 of the Trump presidency.”

“Phase 2 has seen Trump unhinged and unbound. Trump has neutered Kelly, distanced himself from Mattis and sacked Tillerson, McMaster and Cohn. He replaced the last three with men so hungry for their jobs that they were ready to step over the bodies of their predecessors, who, they knew, were pushed out for standing up to Trump on policies and principles.”

‘Watching longtime anti-Russia hawks — Secretary of State Mike Pompeo and National Security Adviser John Bolton — shucking off everything they’ve said over the years and ignoring Trump’s coddling of Putin and his trashing of the F.B.I. in order to grab jobs they’d long coveted is witnessing careerism, sycophancy and cynicism on an industrial scale.”

“But that sets up Trump Phase 3: unhinged and unbound and unintended.”

What are the unintended consequences of a U.S. president simultaneously starting trade wars with China, the European Union and Canada, putting Russia first over America first, preferring Putin and other autocrats over our traditional democratic allies, slashing corporate taxes and supercharging the national debt — without any compensating tax increases or spending cuts, thereby putting pressure on interest rates and the trade deficit — ignoring climate change and eliminating all restraints on the exploitation of fossil fuels, breaking the Iran nuclear deal and now threatening war with Iran, limiting immigration into our already tight labor markets, steadily eroding Obamacare and violating so many norms of how a president should behave toward his staff, allies and Americans not from his own party?

“What are the unintended consequences of all of these at once — none of which have been the product of traditional interagency analyses or expert hearings in Congress, but simply the crude fulfillment of campaign promises that emerged from Trump’s gut?”

“Who knows? Maybe there will be some good consequences — maybe China and Iran will cave to Trump’s demands; maybe the economy and stock market will continue to surge; maybe the early promising signs from Trump’s impulsive outreach to North Korea will bear fruit.”

“What I know for sure, though, is that no U.S. president can break so many longstanding relationships, ignore so much basic science and economics and violate so many norms of presidential behavior without unintended consequences. But they will take time to play out.”