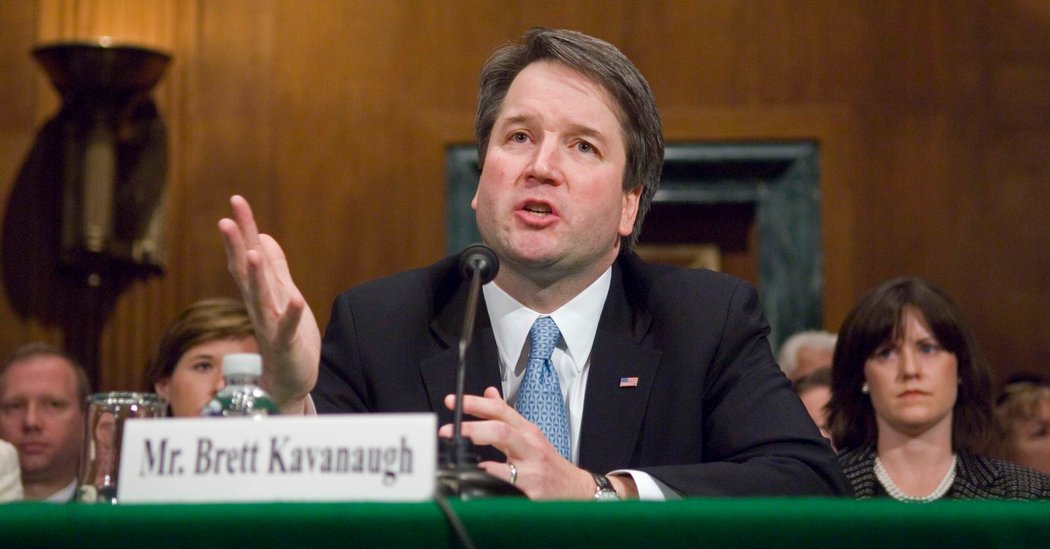 There’s no way around it. The republican President Donald Trump has selected a highly partisan hack for the Republican Party’s pick to be the next Supreme Court justice.

I will be doing several posts about this selection by our president. Let’s put it this way. If republicans want a particular ruling, Mr. Kavanaugh is their man.

Meanwhile the democrats on the US Senate Judiciary Committee are being blocked from access to crucial information regarding Mr. Kavanaugh’s past political activities. So far the media has revealed that he was a major force behind the creation of  “super Pacs” and as per this blog, he pushed for the graphic questions asked by Kenneth Starr of President Bill Clinton pertaining to his relationship with Monica Lewinsky. As per the 8/13/18 Hill report by Jordain Carney, “Feinstein sent a letter to Ferriero last week asking him to reconsider the Archives decision not to respond to Democrat-only requests for Kavanaugh’s documents. But she faced an uphill fight after Ferriero rebuffed a similar request from Senate Minority Leader Charles Schumer (D-N.Y.).”

“Ferriero noted to Feinstein that he had consulted with his general counsel as well as the Department of Justice, which had confirmed their interpretation of the Presidential Records Act (PRA) and supported the Archives “longstanding and consistent practice of responding only to requests from committee chairs.”
“Ferriero’s denial of Feinstein comes as Republicans are pressing ahead with Kavanaugh’s nomination. “

Brett Kavanaugh
“Chairman Chuck Grassley (R-Iowa) announced on Friday that the Senate Judiciary Committee will hold a hearing on Kavanaugh’s nomination starting on Sept. 4. The hearing, he said, would last three or four days.”
“Senate Majority Whip John Cornyn (R-Texas) indicated that senators would be on track to have a floor vote on Kavanaugh’s nomination before the Supreme Court starts its next term, in October. “

“The timeline means that a confirmation vote on Kavanaugh is likely before the National Archives is able to fulfill Grassley’s request for documents from Kavanaugh’s time as a White House lawyer (under President George W. Bush).”

“The agency wrote to Grassley that it wouldn’t be able to complete the request, which it expects will total more than 900,000 pages, until late October. The documents would still need to go through a final review before being turned over to the committee.”

“But Republicans have pledged to move his nomination anyway, arguing that a legal team for President George W. Bush is reviewing the same documents and will be able to hand over the documents at a faster pace.”

The (Democrats) want the National Archives to hand over documents from Kavanaugh’s work as a staff secretary for the Bush White House, arguing it would shed light on his legal thinking on controversial issues like torture or surveillance.
Republicans have refused to request the paperwork, accusing Democrats of going on a “fishing expedition” that could slow-walk Kavanaugh’s nomination. Because Democrats are in the minority, they are powerless to force the Archives to hand over Kavanaugh’s staff secretary work. Brett M. Kavanaugh, President Trump’s Supreme Court nominee, urged prosecutors investigating President Bill Clinton to question him in graphic detail about his sexual relationship with Monica Lewinsky, a White House intern, according to a memorandum released on Monday by the National Archives. “Mr. Kavanaugh spent more than three years working for Ken Starr, the independent counsel who investigated a series of scandals during Mr. Clinton’s presidency, and he worked on the report that led the House of Representatives to impeach Mr. Clinton. Mr. Kavanaugh drew up the memo as other members of Mr. Starr’s team were preparing to question Mr. Clinton.”

“The memo, dated Aug. 15, 1998, was shot through with disgust for Mr. Clinton’s behavior and seemed animated by the deep animosity that had developed between the White House and Mr. Starr’s team.”

“Former members of Mr. Starr’s team have said that Mr. Kavanaugh, who is now a judge on the United States Court of Appeals for the District of Columbia Circuit, immediately “regretted its tone. “The president has disgraced his office, the legal system and the American people by having sex with a 22-year-old intern and turning her life into a shambles — callous and disgusting behavior that has somehow gotten lost in the shuffle,” Mr. Kavanaugh wrote.

“He has committed perjury (at least) in the Jones case,” Mr. Kavanaugh wrote, referring to the sexual harassment case brought by Paula Jones, an Arkansas state worker who said Mr. Clinton had made lewd advances toward her in a hotel room when he was governor.

“He has lied to his aides,” Mr. Kavanaugh wrote. “He has lied to the American people. He has tried to disgrace you” — meaning Mr. Starr — “and this office with a sustained propaganda campaign that would make Nixon blush.”

“It may not be our job to impose sanctions on him, but it is our job to make his pattern of revolting behavior clear — piece by painful piece,” Mr. Kavanaugh wrote. “Aren’t we failing to fulfill our duty to the American people if we willingly ‘conspire’ with the president in an effort to conceal the true nature of his acts?”

“To that end, Mr. Kavanaugh wrote, Mr. Clinton should be asked extremely detailed questions unless he first either resigned or admitted to perjury and publicly apologized to Mr. Starr.”

“Mr. Kavanaugh listed 10 possible questions based on Ms. Lewinsky’s testimony, saying that he would “leave the best phrasing to others.” Among them were these:”

“If Monica Lewinsky says that you had phone sex with her on approximately 15 occasions, would she be lying?”

“If Monica Lewinsky says that you ejaculated into her mouth on two occasions in the Oval Office area, would she be lying?”

“If Monica Lewinsky says that you masturbated into a trash can in your secretary’s office, would she be lying?” 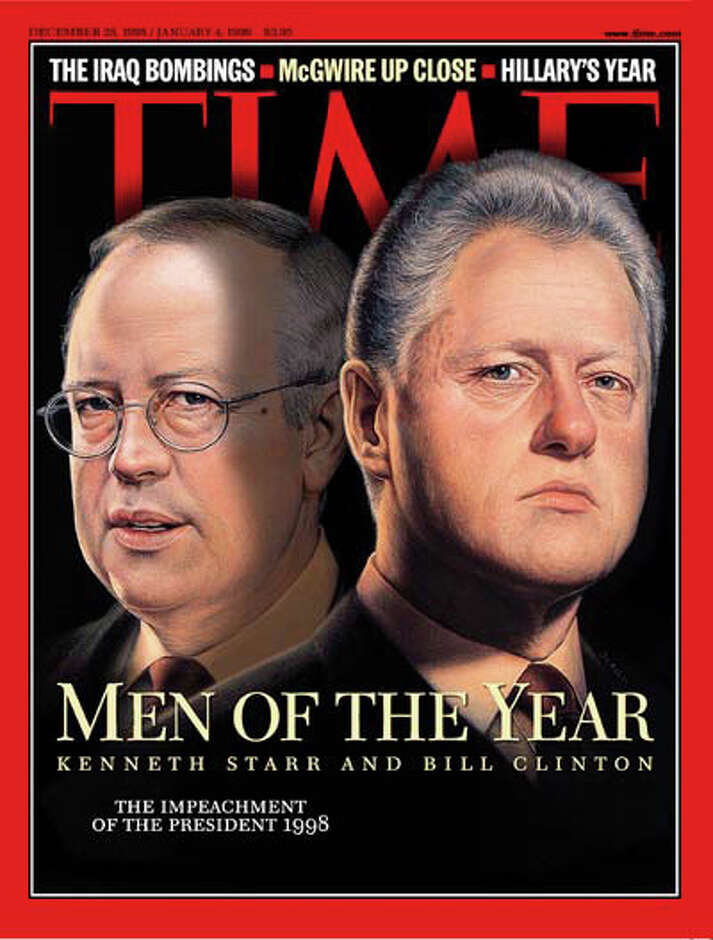 “The substance of the memo has long been available, notably in a 2010 book, “The Death of American Virtue: Clinton vs. Starr,” by Ken Gormley. But the full memo had not been made public until Monday, and it provided striking details about the hard line Mr. Kavanaugh urged his colleagues to take.”

“In an interview this month, Robert Bittman, the deputy counsel who led the Lewinsky prosecution for Mr. Starr, said Mr. Kavanaugh had recognized that the memo was a misstep.”

“Brett immediately regretted the tone of that memo,” Mr. Bittman said. “My memory is that he was sleep deprived and then quickly realized in retrospect that it was over the top.”

“Mr. Kavanaugh took a different approach when Mr. Starr was about to provide Congress with a report laying out possible grounds for impeachment, urging his colleagues to use discretion in describing Mr. Clinton’s interactions with Ms. Lewinsky.”

“He lost that fight. The final report included all of the sexual details, and it was quickly made available on the internet.”

“In the memo, Mr. Kavanaugh said he was “mindful of the need to respect the office of the president.” “Judge Kavanaugh is likely to say that his views on the wisdom of criminal investigations of sitting presidents have evolved considerably in the two decades since he wrote the memo.

“I believe that the president should be excused from some of the burdens of ordinary citizenship while serving in office,” he wrote in 2009 in the Minnesota Law Review, after an extended stint in the George W. Bush White House and after he became a judge. Among those burdens, Judge Kavanaugh wrote, were responding to civil lawsuits and criminal charges.”

“He said Congress should consider imposing limits on such proceedings.” “Judge Kavanaugh said that the proceedings could resume after a president left office and that impeachment remained an option before then.”

“His years of service as staff secretary to Mr. Bush had altered his understanding of the all-consuming nature of the presidency, he wrote in 2009, at the start of the Obama administration. The investigation of Mr. Clinton, he wrote, had been misguided.” 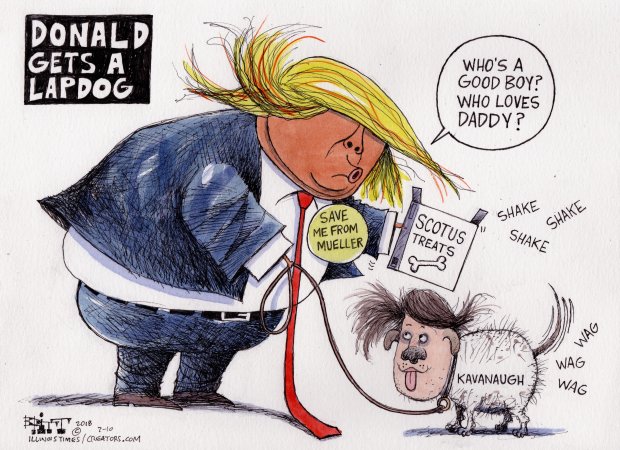 “Like many Americans at that time, I believed that the president should be required to shoulder the same obligations that we all carry,” he wrote. “But in retrospect, that seems a mistake.

“Looking back to the late 1990s, for example,” Judge Kavanaugh wrote, “the nation certainly would have been better off if President Clinton could have focused on Osama bin Laden without being distracted by the Paula Jones sexual harassment case and its criminal investigation offshoots.”

“At the time, though, Mr. Kavanaugh took a hard line, aghast that Mr. Clinton had lied and tarnished the presidency — “all to cover up his oral sex from an intern.”